In case you missed it, Steve Jobs made a surprise appearance at today’s Apple Q4 earnings call. What he had to say about 7-inch tablets, Android, Nokia, RIM and Apple’s philosophy is all over the internet. You can read a full transcript here.

Reading between the lines, what strikes me is the focus Steve put on the word “integrated”. The iOS platform is integrated, Android is fragmented. With the iPhone, you get an integrated device. You don’t have to mess with hundreds of different devices running multiple versions and variations of the Android OS. But that’s not really the point, we get Steve’s thoughts on Android. Tweetdeck’s developers get them even more.

What interests me is the use of the term “integrated” as a new way of defining iOS, and thus the devices is runs on, against competitors. By definition, to integrate means to “combine two or more elements so that they become a whole”. So it’s clear that, in Jobs’ mind, Apple deeply integrated the hardware with the software to create a new, reliable, user-friendly experience. 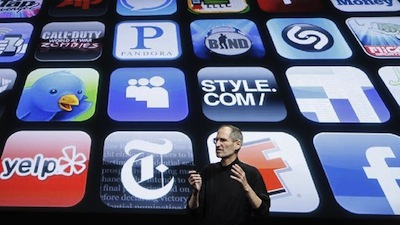 Contrast this with Apple’s integrated App Store, which offers users the easiest-to-use largest app store in the world, preloaded on every iPhone.

Google flirted with this integrated approach with their Nexus One phone.

In reality, we think the open versus closed argument is just a smokescreen to try and hide the real issue, which is, “What’s best for the customer – fragmented versus integrated?” We think Android is very, very fragmented, and becoming more fragmented by the day.

In Steve’s words, a “hardware person” looks at a device and thinks about putting some great specs in there; a faster processor or a better screen. Then at the end of the process, he thinks about what software might run on the thing and he puts it in there without really paying attention to integration with the hardware. Where others make software for hardware, Apple demands hardware for its software.

The integration Steve is referring to happens at a basic development stage: the device is built with the software in mind. A paradox? Not really: in order to guarantee a great user experience with the device (hardware), a fantastic operating system is needed (software). Apple’s chain moves in reverse, and so far this strategy has been working for them. That is the reason why they didn’t simply put a bigger version of the iPhone OS on the iPad. That is why they didn’t ship multitasking before iOS 4 - the hardware wasn’t ready for software.

That is a first acception of integration. I believe, though, that Steve is also referring to App Store-wise integration here. On Android, you have an app store containing apps that may or may not run on certain devices due to the platform’s fragmented nature. On iOS, you have an App Store.app that showcases 300,000 applications available for iPhone and iPad and you can stay assured all of them will work no matter the device you’re on. With some exceptions: of course a photography app won’t work in emulation mode on the iPad. You get the point. The App Store integration happens in a way that the user knows for sure he can go open the Store and start installing apps. There’s no Tweetdeck issue here. The hardware is, again, tied to the software delivered by the App Store. The underlying method of selling and promoting applications sells and delivers apps that can actually work on all devices.

And as you know, Apple strives for the integrated model so that the user isn’t forced to be the systems integrator. We see tremendous value at having Apple, rather than our users, be the systems integrator. We think this a huge strength of our approach compared to Google’s: when selling the users who want their devices to just work, we believe that integrated will trump fragmented every time.

Here’s where the old “curation” myth comes in place. Apple is the “curator” that picks, approves and sells software; the user’s only requirement is to buy that software and enjoy it. By giving users devices that just work, Apple makes sure to have users consuming software on an integrated environment with applications already gone through Apple’s approval and curation system. The user doesn’t have to run some weird permission-repair technique or other tricks to use the software: it’s the third level of integration that meets Apple’s fundamental curated approach.

Put simply: the hardware depends on software, software comes from an App Store that delivers apps capable of running on any device from Apple.