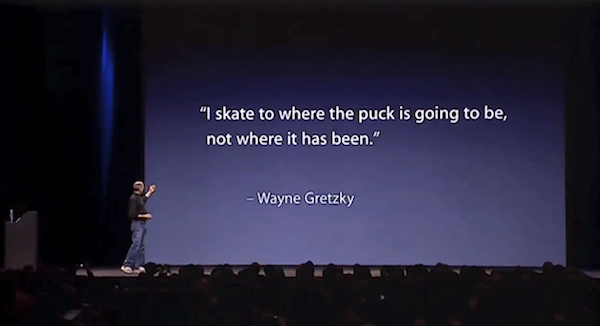 Here’s a thought: Apple isn’t ahead of its competitors only in terms of hardware design, software, and product marketing. When Apple takes a step ahead, it also takes three more to the side – and that’s what’s helping them shape the industry today.

We often refer to Apple as a company “ahead of the competition” with products like the iPhone, iPad, OS X and iTunes. I believe what’s driving the single “step ahead” isn’t the (successful) combination of products and customer satisfaction – it’s the company itself, its culture, the image they want to show to the world. The “step ahead” is Apple’s DNA.

But consider the three steps to the side that help Apple differentiate itself from the competition, and roll out products and services that people are actually willing to pay for. These three steps are taken in regards of hardware, software, and the overall message the interplay of both has to deliver.

Hardware: iPhone, iPad, iPod, Mac. These products have an attractive design, and they’re the result of Apple’s deals to secure components before anyone else at a lower price, for the long-term. That’s why it took months for competitors to figure out multi-touch after the first iPhone, and why Ultrabooks still can’t match the MacBook Air.

Software: iOS, OS X, iTunes, iCloud. Software is the soul to Apple’s products, it is the reason why Apple hardware “just works”.

Message: Apple wants to make the best products in the world. Products they can sell for a profit, and make people happy with at the same time. Through the right combination of prices, attractive design, and marketing, the “interplay of hardware and software” is what defines Apple’s message.

This is where competitors and Apple stand: 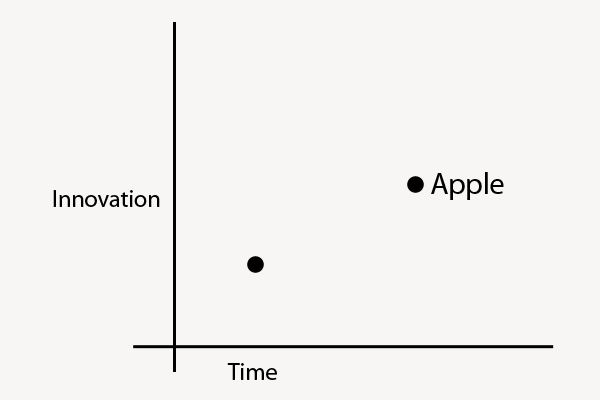 You can also think of “Innovation” as “Liberal Arts” and “Time” as “Technology”. When Apple takes a major leap forward, it does so because it’s in their DNA to innovate and sit at the intersection of Technology and Liberal Arts; alongside the single breakthrough in terms of innovation, they take three equally disruptive steps to the side to stand out from their competitors thanks to the great efforts they’ve gone through to advance in technology.

Technology evolves with time. Apple’s three steps allow them to have a considerable time advantage – this is the reason why many phones today still can’t match the original iPhone from 2007.

iPhone is a revolutionary and magical product that is literally five years ahead of any other mobile phone.

But is still ahead just because Apple kept iterating on the original idea?

Technology isn’t a 100 meters sprint race. Companies that want to be successful can’t keep running the same race, more of the same following more of the same. Just take a look at RIM. Apple knows that technology alone is not enough. And thus evolving with time alone (upgrading the same product with new hardware) won’t matter much if risks aren’t taken other directions as well.

Apple reinvented itself as it was moving ahead. Steve Jobs, announcing the iPad in January 2010:

Everybody uses a laptop and a smartphone. And a question has arisen lately: is there room for a third category of device in the middle? Something that’s between a laptop and a smartphone. And of course we’ve pondered this question for years as well. The bar’s pretty high. In order to really create a new category of devices, those devices are going to have to be far better at doing some key tasks. Better than a laptop. Better than a smartphone. Now, some people have thought…that’s a netbook. The problem is, netbooks aren’t better at anything. They’re slow, they have low quality displays and they run clunky old PC software. So, they’re not better than a laptop at anything. They’re just cheaper. They’re just cheap laptops. We don’t think they’re a new category of device.

Progress, ultimately, is adaptation. This started with the iPhone in 2007, and ends with iCloud in 2011. When iOS 5 and iCloud come out this Fall, there will be a brand new vision – and therefore, kind of adaptation – moving forward. A company that constantly adapts to an ever-changing market generates desires for the new, whilst simplicity and usability lead to customer satisfaction. At a higher level, it is the interplay of progress and simplicity that keeps Apple growing.