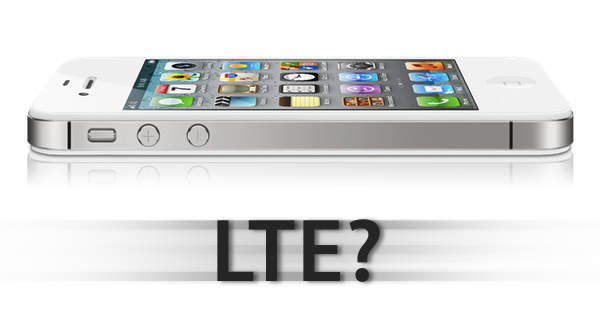 The iPhone 4S, released in October, was supposed to feature LTE connectivity, at least according to some of the rumors that were floating around at the time. The device turned out to feature faster 3G downloads at 14.4 Mbps through HSPDA, which is an enhanced version of the 3G protocol that has been around for a while, but still isn’t as widely adopted as you would expect from a technology that Apple decided to use in a major iPhone upgrade. In Italy, for instance, few areas have access to HSDPA, not to mention HSPA+.

(Note: although commonly referred to as “4G” the current revision of LTE doesn’t meet the requirements for 4G connectivity yet. The LTE Advanced standard does conform to 4G requirements, but it’s likely that you’ll see the term “LTE” associated with 4G simply because it’s a major leap forward in terms of wireless connectivity)

Now, the debate as to whether Apple should have made the 4S an LTE iPhone or should have an LTE iPhone 5 this year is making the rounds again. Unlike previous debates, fortunately this time we have someone who’s trying to make some sense out of this and cut through the haze of rumors and theories to point out that, actually, it wouldn’t make much sense business-wise for Apple to implement LTE in the near term. Why? Because of all those 37 million iPhones Apple has sold in the quarter that ended on December 31, very few of them were sold in areas where LTE is available. Read: the United States, some parts of Denmark and Sweden, some cities in Canada, and Saudi Arabia. The “4G” rollout in countries other than the US is a slow process, and the ones mentioned above have a very small percentage of their spectrum covered by active LTE networks – they’re basically in the middle of initial testing right now. And even in the US, Chris Foreman assumes that whilst the major carriers have all implemented LTE or will start relatively soon, only half of subscribers would be covered in 2012, thus reducing the potential addressable market to 15% of iPhone customers worldwide. Why would Apple make an LTE iPhone for 15% of its entire customer base?

According to fourth quarter 2011 results, AT&T activated 4.1 million iPhones, while Verizon activated 4.2 million. Sprint would not disclose the number of iPhones it activated last quarter, but we feel safe in assuming that number is less than 4 million. Assuming Sprint was able to activate (perhaps a generous) 2 million or so iPhones, only a little over a quarter of iPhones were sold in the US. The other three-quarters, then, are sold in areas with practically no LTE coverage.

It goes deeper. You might argue that, yes, Apple could make an exception because they have made some in the past. But the WiFi-less 3GS and camera-less iPhone 4S were necessary modifications to get these devices on sale, otherwise they wouldn’t have gotten regulatory approval. It’s not like Apple is forced to implement LTE, especially considering the enhanced 3G still isn’t as widely adopted as the company hopes.

The LTE iPhone is primarily the result of months of speculation and countless rumors based on nothing. No evidence. Perhaps a few code strings here and there, but then again – go trust those code references these days. For all we know, the LTE iPhone doesn’t exist.

Or does it? A popular counterargument I often get is that Apple experiments with all kinds of new technologies in their labs; they take a look at new specifications and standards, and consider whether they should be worth investing more research and development resources for possible future implementations. I get it, and it’s entirely plausible that Apple engineers have at least looked at current LTE chips utilized by several Android handsets. But I don’t know how far they may have gotten into actually testing these chips, if only for verification purposes, at the light of Cook’s multiple remarks in the past about concerns regarding the effects these chips have on battery life. Those bigger screens Android makers tout in their commercials might be a requirement, rather than a feature. But I digress.

Another popular theory is that new LTE chips by Qualcomm, a component supplier Apple is already using, should become available in the first half of this year and, based on published specifications, allow device makers to considerably cut down on battery usage and required space. These new chips are smaller, consume less power and are made by a company Apple already buys components from. The next iPhone will have LTE! Not so fast.

Before I continue, let’s recap:

Also keep in mind that Apple:

Now, another popular theory I’ve seen surfacing recently is that of the iPad getting LTE support before the iPhone because of the bigger room Apple may have to place batteries inside. I even reported an article from Bloomberg in which they claimed the next-generation iPad would feature LTE, as it’s unusual for an organization like Bloomberg to go on the record with such specifics and alleged product details. Whilst from a superficial analysis it might seem this theory “has legs” and Apple could really deliver an iPad 3 LTE in time for March, I would like to focus on a couple more points. First off is the Retina Display, which seems very likely to happen on the next iPad, and would certainly require more horsepower to move double the pixels than an iPad or iPad 2. The horsepower will apparently be provided by a quad-core A6, and you can see how things start piling up: a Retina display with double the resolution, more intensive processor, more RAM…it’s not like the iPad 3 won’t have new components to power besides LTE. And so I wonder – what’s the chance Apple has figured out a way to manage the Retina Display and quad-core processing and deliver LTE at the same time? Sure Apple’s engineering team is well-known for giving priority to low-power consumption (this has been true with the original iPhone, and Mac OS X before that) and, who knows, perhaps even the Anobit team is involved in this, but I find it hard to believe the iPad 3 is going to have the same thickness (or is it thinness?) of iPad 2 adding a new display, more RAM, a new processor and more powerful batteries. Batteries which, at some point, will have to use a completely new technology, as we can’t just keep making them bigger every year.

But let’s assume Apple has got the iPad 3 hardware all figured out and they know to integrate Retina Display, A6 and LTE. The question remains, who would benefit from LTE in 2012?

According to recent data, Britain will get 4G networks in 2013/2014 with “wide availability” expected sometime during 2015. The situation is more or less the same in the rest of Europe: whilst Denmark and Sweden are one step ahead of other countries in LTE deployment (The Next Web has more on this), Italy, for instance, closed its auctions to assign the 4G LTE spectrum in late September 2011, with all the major carriers (Tre, Tim, Vodafone, Wind) getting a portion of the available 800 MHz, 1800 MHz, and 2600 MHz spectrum. When will these carriers begin LTE testing and deployment? The latest tidbits suggest preliminary testing in selected cities will become later this year (2012), with initial deployment – but not “wide availability” – expected for 2013/2014; moreover, the 800 MHz spectrum – the digital dividend – will become available to cellular frequencies after January 2013, forcing the carriers to postpone their LTE deployment or at least begin at a much smaller scale than other European countries. It appears Tre Italia (H3G) will launch LTE on the market in late 2012, although it’s not clear as to whether it’ll be a large rollout or an initial testing period with the usual four or five cities getting LTE.

The LTE rollout timeframe seems to be pretty much the same across all Europe, with only a few countries having started testing in early 2011. French carrier Orange has confirmed LTE testing in Paris during 2012 and initial rollout in 2013; LTE auctions took place in Spain last summer, and the usual “initial testing” stages are set to begin later this year. Meanwhile, China is struggling with its home-grown TD-LTE standard as the rest of world is slowly adopting the more common FDD-LTE. Obviously, there had to be a rumor about Apple readying a TD-LTE “iPhone 5” for China Mobile but, as you know, nothing has materialized yet. 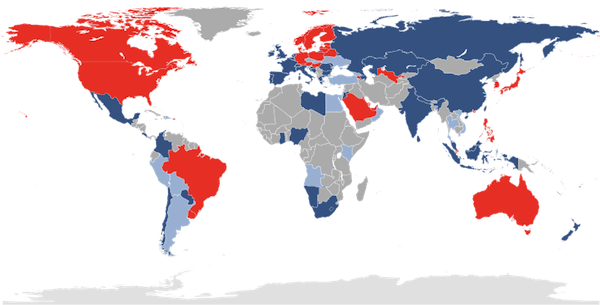 Here’s AT&T and Verizon in the United States: 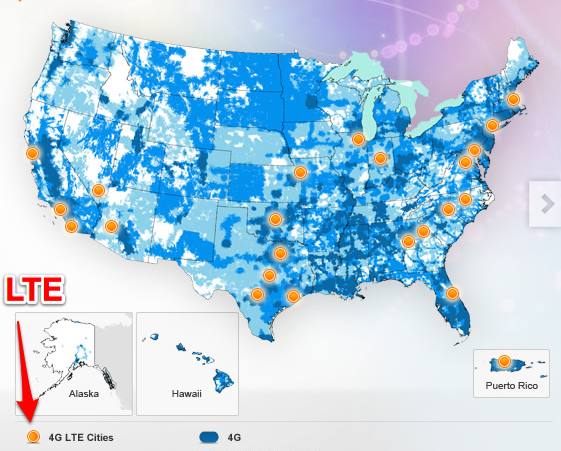 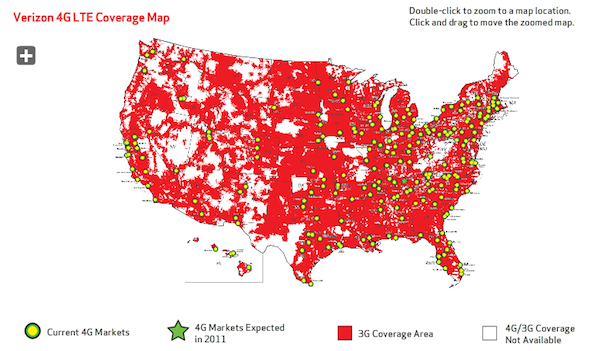 Also, a reminder about Apple’s revenue by operating segment in Q1 2012. Apple doesn’t make money in the US alone, unlike some would have you believe. 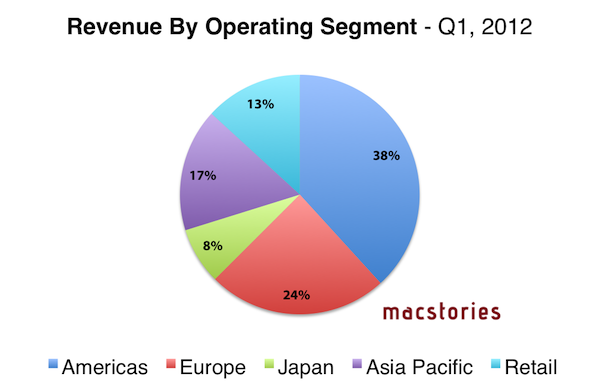 The data and images above depict the following scenario: LTE is very much still in its infancy with wide availability expected between 2014 and 2015, and the people who are clamoring for an LTE-ready iPhone don’t realize that the U.S. isn’t the only market Apple’s basing its business on. Together, Europe and Asia Pacific are bigger than the U.S. for Apple now. Neither of them has a solid LTE strategy yet.

Putting the rumors aside, it would be technically possible for Apple to implement LTE in the iPad and iPhone this year assuming that a) both devices are coming out after Qualcomm makes new LTE chips available (seems likely) and b) Apple has figured out a way to improve specs, preserve battery life and use LTE (we don’t know). But here’s a thought: if Apple’s main concern is battery life and space on the board, why not begin the move to LTE with the MacBook Pros, just as with Thunderbolt last year? I imagine that Apple could begin testing integrated LTE chips in their computers, where they have more room for experimentation and battery life shouldn’t be much of an issue – but then again, we don’t know what’s going to happen to the MacBook Pro/Air line either.

More importantly, I still don’t see why Apple should invest heavily on LTE as the biggest feature for its top-selling product when very few of its customers have access to it today, or will in October of this year. If anything, it would make sense to wait for wider LTE availability, better chips from Qualcomm and the 2013 -S revision of the iPhone 5. But like I said, I’m not a person familiar with the matter.