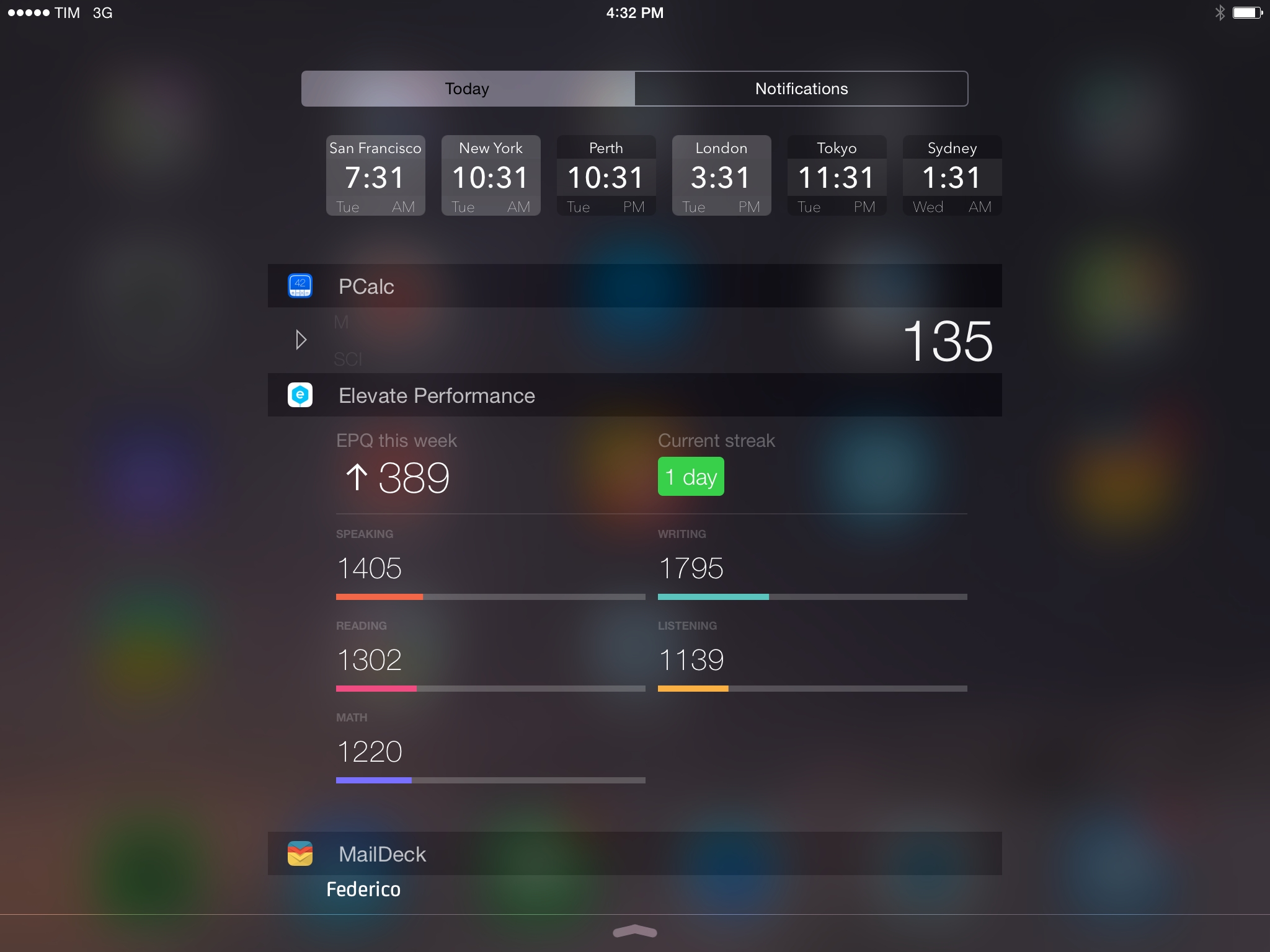 While iOS 8 user adoption may be slowing, the same hasn’t been true for third-party apps. Developers are embracing the new OS with app updates that take advantage of new features such as widgets and extensions, and since the release of iOS 8 last month I’ve been trying dozens of new apps and utilities in my daily workflow.

Some of these apps will turn into full reviews; others will likely be replaced over time. I’ve been having fun exploring the App Store and discovering new software for iOS 8, and I thought it’d be nice to keep documenting what I’m trying. Consider this a follow-up to my earlier post from September 19th.

You can find the list below and our complete iOS 8 coverage here.

I didn’t think I’d ever be interested in brain training games until I tried Elevate. As we recently discussed on Virtual, Elevate features a variety of games to enhance your writing skills, math knowledge, ability to interpret and recognize spoken English, and more. The presentation of games is stunning with beautiful illustrations and great sound effects; interactions are always surprising but intuitive thanks to touch controls and comfortable touch targets.

Elevate is Brain Age built for the modern era of iOS. Its daily sessions make for a nice way to kill a few minutes every day, and your current progress and streak can be visualized through a Today widget. I thought that brain training games were all placebo and no substance, but in practice I’ve found that Elevate has taught me several new words and helps write more concisely.

Elevate is free on the App Store with a Pro subscription to unlock more games. 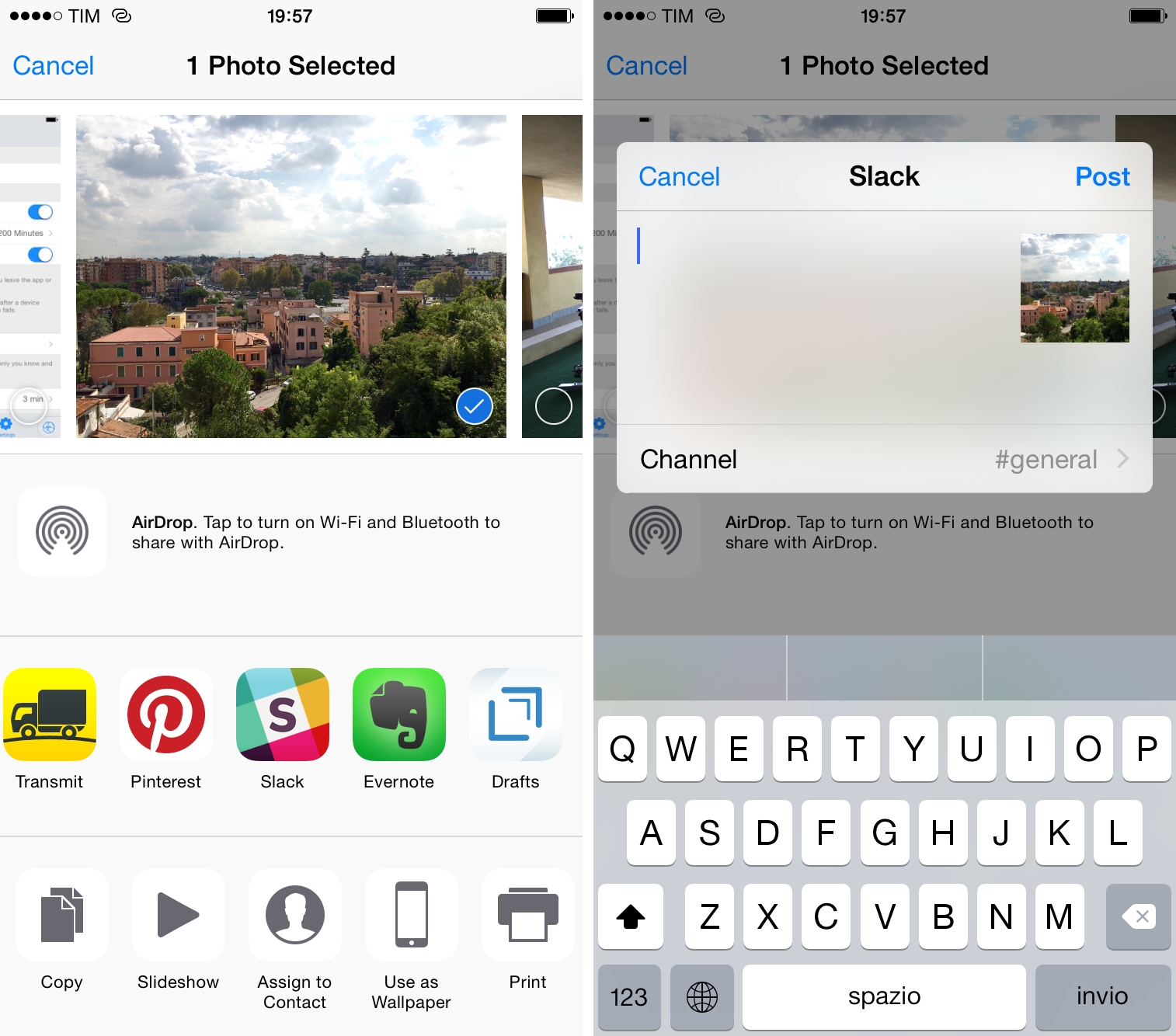 I convinced Stephen and Myke to try Slack and then I realized I preferred GroupMe for group messaging. However, the damage has been done and now I have to rely on Slack for our Relay FM communications. Slack is growing on me – the third-party integrations are the main differentiator from GroupMe – and I like the share extension for iOS 8. I find it particularly handy to quickly post a screenshot from the Photos app into a specific Slack channel.

Slack is free on the App Store. 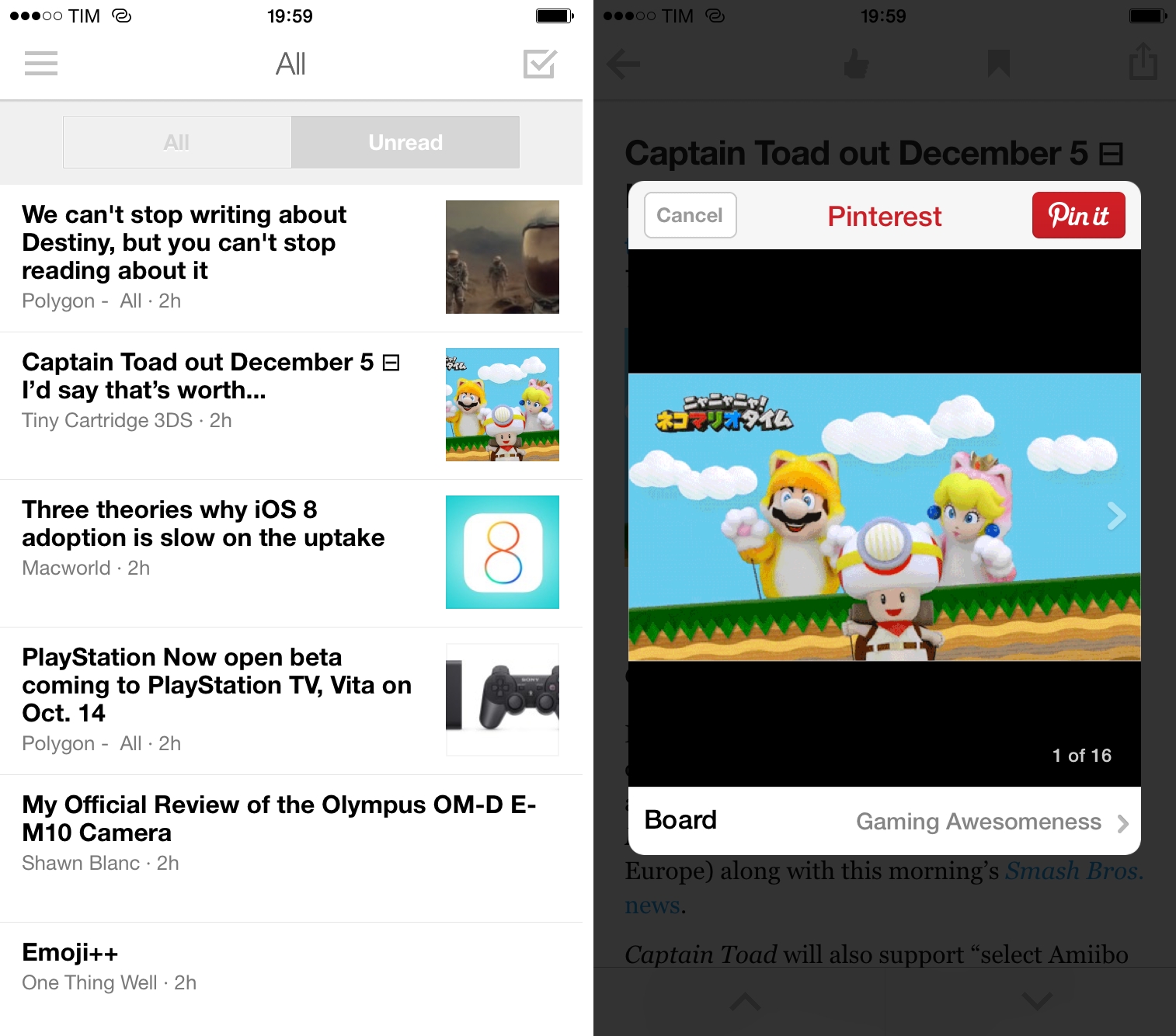 One of the best app surprises I’ve come across lately, Digg is a solid RSS reader and news discovery app for iOS. As I mentioned in my article, it’s got native support for iOS 8 action and share extensions, which let me act on links from my RSS without leaving the app. Digg was updated with iPhone 6 support yesterday, and I highly recommend it to anyone who’s looking for an RSS client with full iOS 8 support.

Digg is free on the App Store. 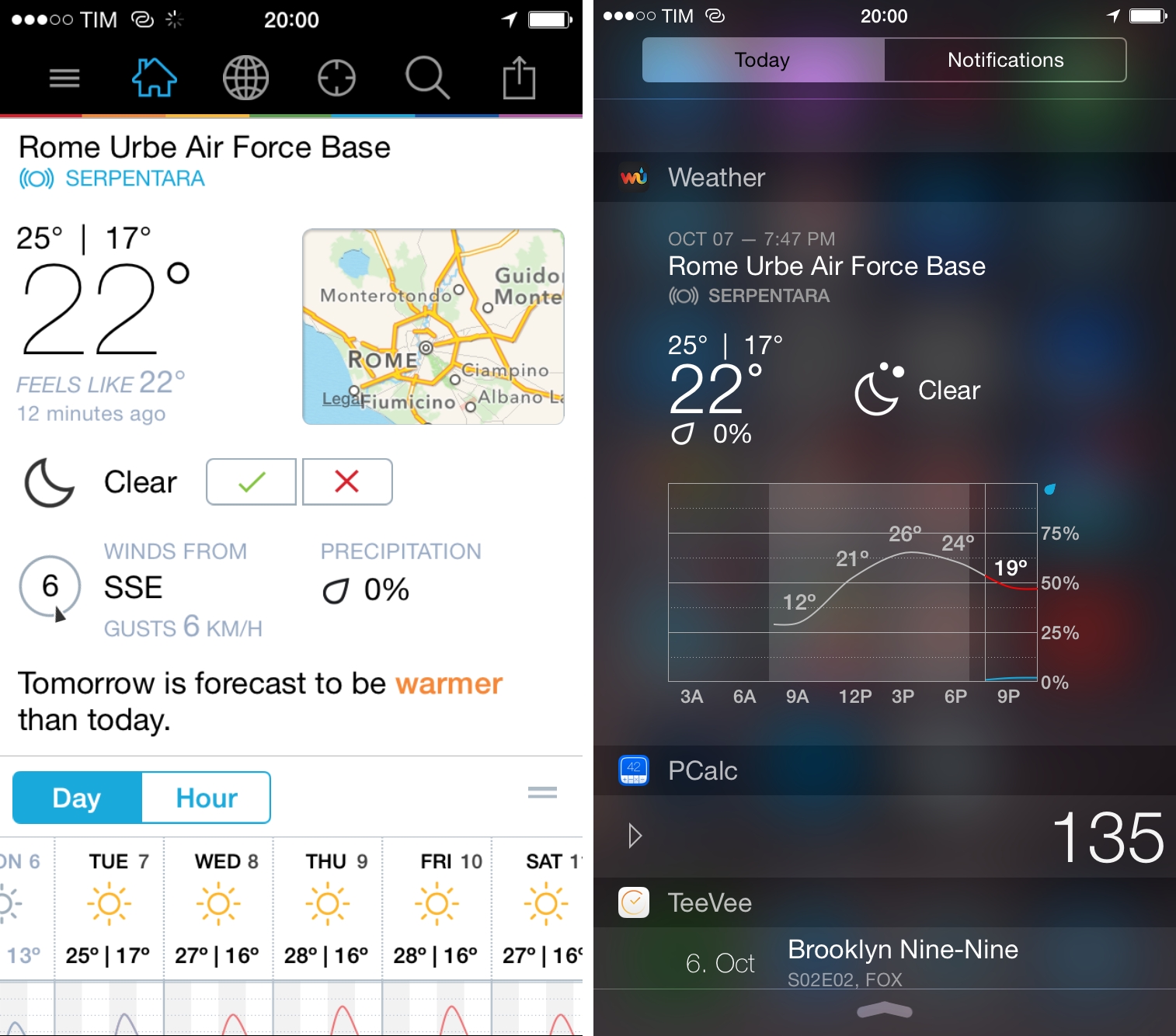 I was looking for cool weather widgets and I stumbled upon the Weather Underground update for iOS 8. I’m not sure I’ll ever need all the functionalities and data this app provides, but I think I will keep using it for one simple reason: it has access to weather stations all around my neighborhood in Rome with accurate and timely weather reports. So while I don’t need to always know what the current weather is like, I like to know if it’s going to rain or not in two hours (road traffic can change considerably in this area).

The Weather Underground widget always refreshes with details for your current location and it has a nice graph showing temperature and precipitation throughout the day. It takes a bit of vertical space in Notification Center, but it’s packed with information.

Weather Underground is available for free on the App Store.

I’ve long been meaning to try this scanning app by Creaceed, primarily for its ability to extract text from images and let you perform actions on recognized text. Prizmo has an iOS 8 action extension that can send any image from the Photos app to Prizmo, which will run its OCR on the file and find text. Once text has been found, you can copy it to the clipboard and paste it in any other app on your device.

I’ve already used Prizmo to turn iTunes screenshots into text for MacStories (such as the blockquote in this article), and I’m looking forward to finding more ways to automate this process. 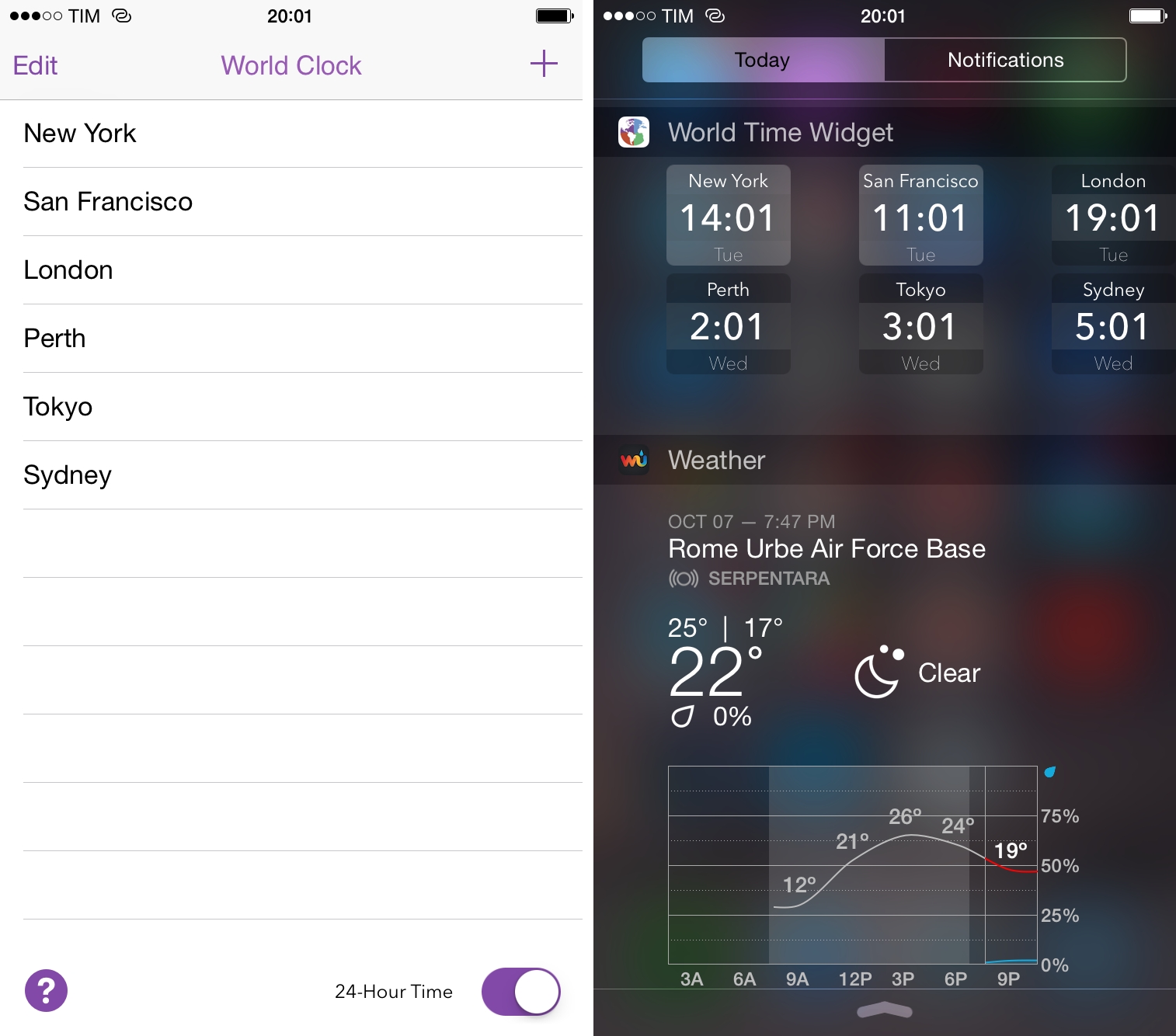 This is a nice widget to add multiple time zones to your Today view. Times are shown horizontally, which means the widget doesn’t waste as much space as others. The layout is clean, readable, and I’m using it every day. 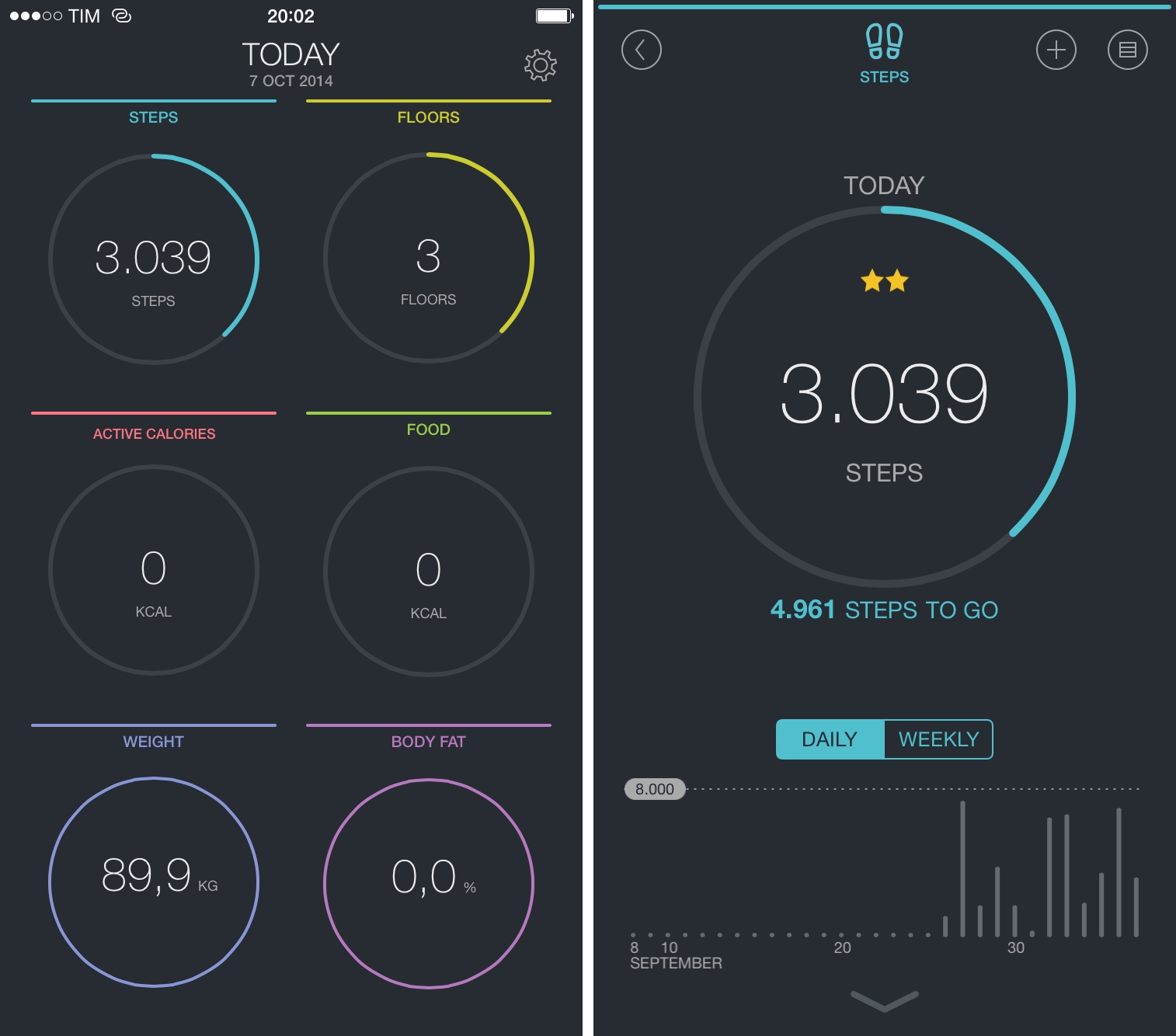 I’ve been having issues with third-party apps and HealthKit integration, but I’ve been enjoying FitPort for the data I can see in the Health app. FitPort can be considered an alternative Health client, offering a different visualization of values such as steps, floors climbed, weight, and other data types registered and stored in the Health app. FitPort shows circles for daily progress and large numbers – a much cleaner presentation than what Apple offers in their app. 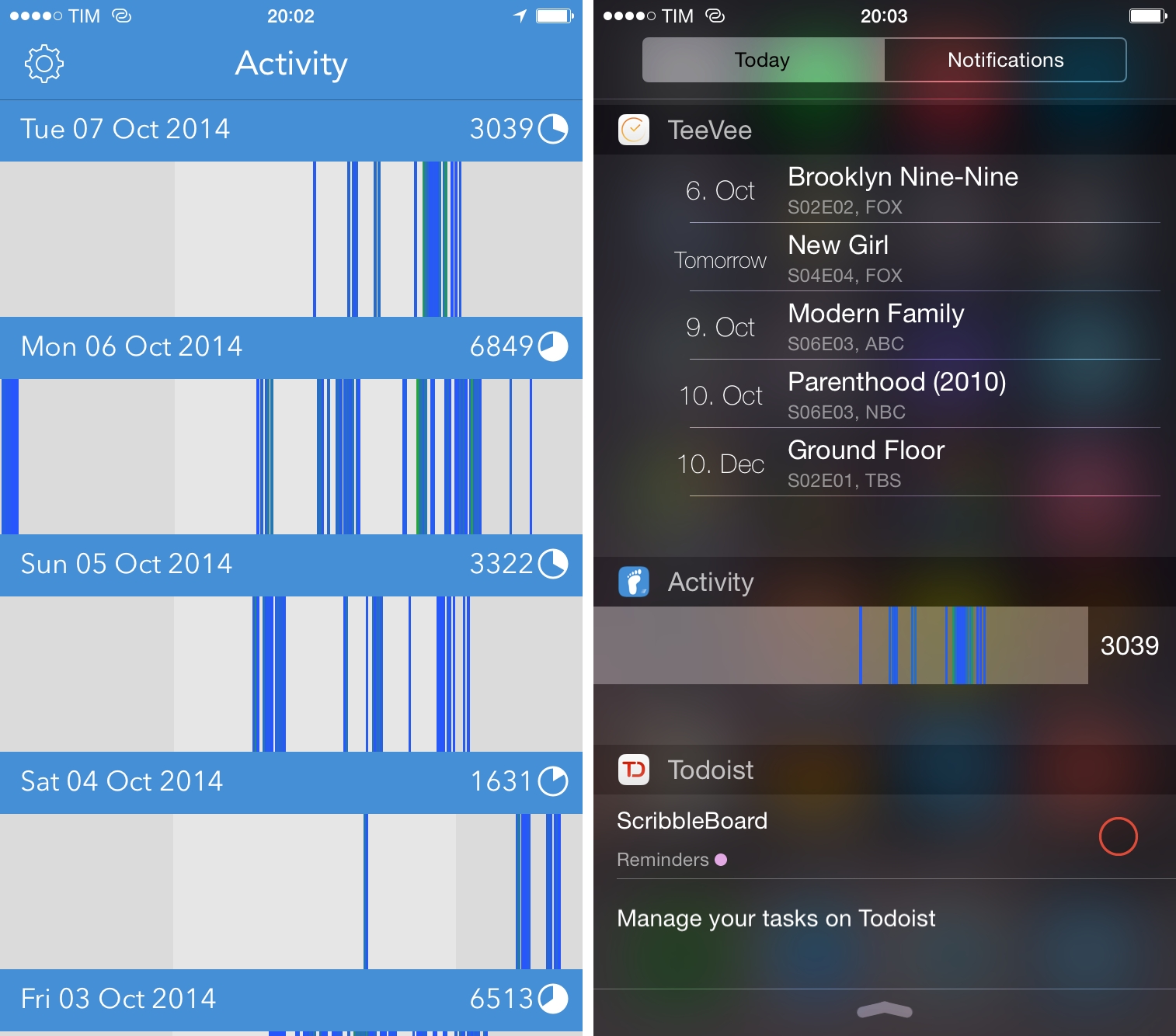 Activity by LogYourRun uses the iPhone’s motion coprocessor to display steps taken as “activity barcodes”. This innovative visualization lets you see when you’ve been active during the day and the app also has a widget to view this information in Notification Center. 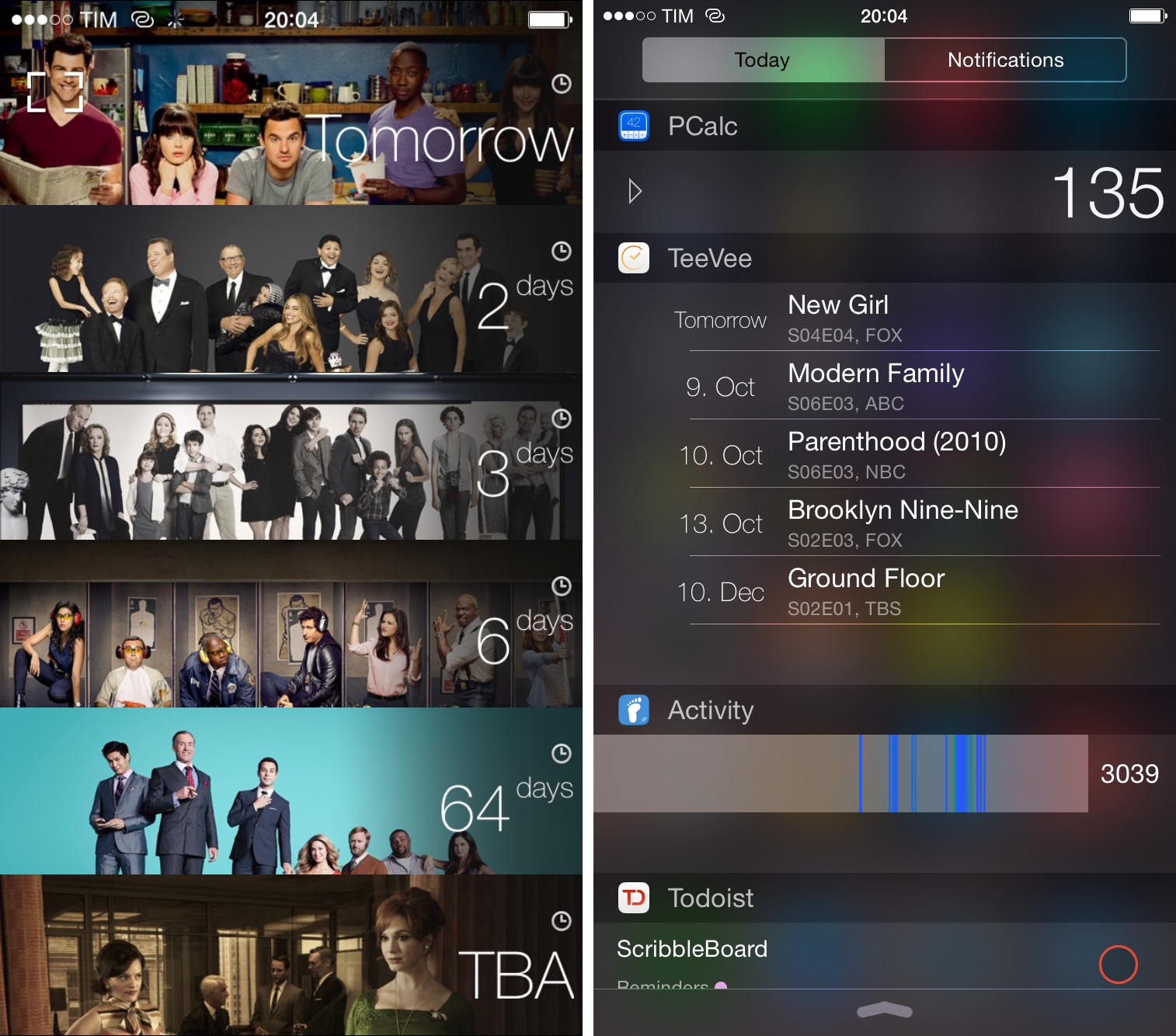 My girlfriend and I watch a lot of TV shows but I forgot to update our calendar with the new schedules for the Fall 2014 season. I went looking for an app with iOS 8 support, and I discovered that TeeVee – an app that I also tried earlier this year – has added iOS 8 integration with a Today widget.

I’m not a fan of many of TeeVee’s design decision: I find light typography on show backgrounds to be attractive but hard to read, and I wish that the developers would add a simpler list mode to view all shows without the fancy photos. The widget, though, is a great addition: with a single swipe, you can see a list of shows airing soon with date and network name (I wish there was an option for times and time zones, though). 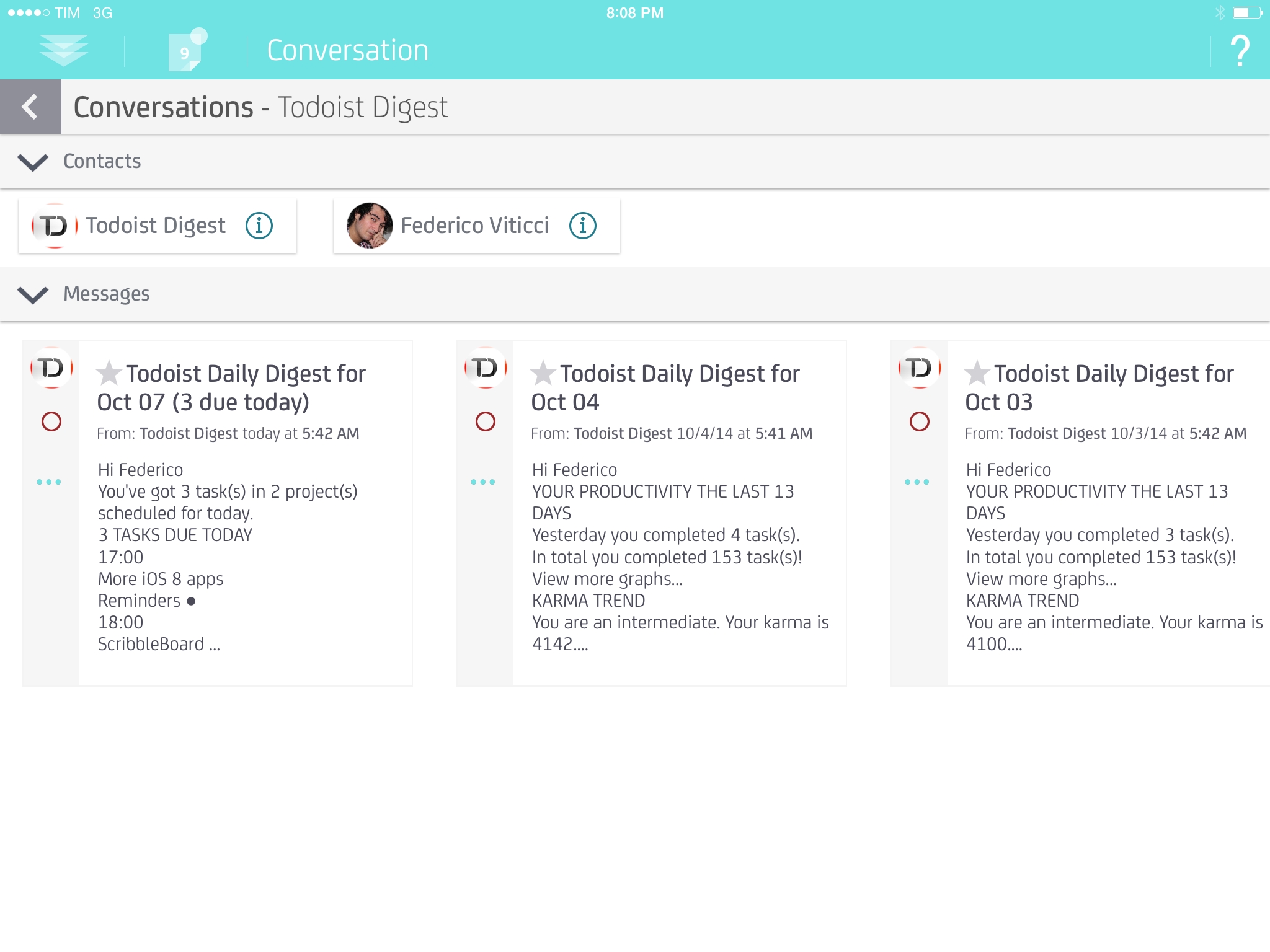 I’m always on the lookout for desktop-class email clients for iOS and MailDeck looks like another possible solution. Its interface is not as clean as Mail or Dispatch, but the app offers full IMAP and Exchange support, fast search with advanced filters, a conversation view that actually makes sense, and replies that can be expanded inline.

For iOS 8, MailDeck added Touch ID logins, a widget to see the number of incoming emails and messages you’ve turned into tasks, and a share extension. The latter is particularly intriguing, as it lets you send emails with MailDeck from any app that can share information with native extensions.

MailDeck is free on the App Store with a subscription to unlock the complete feature set.