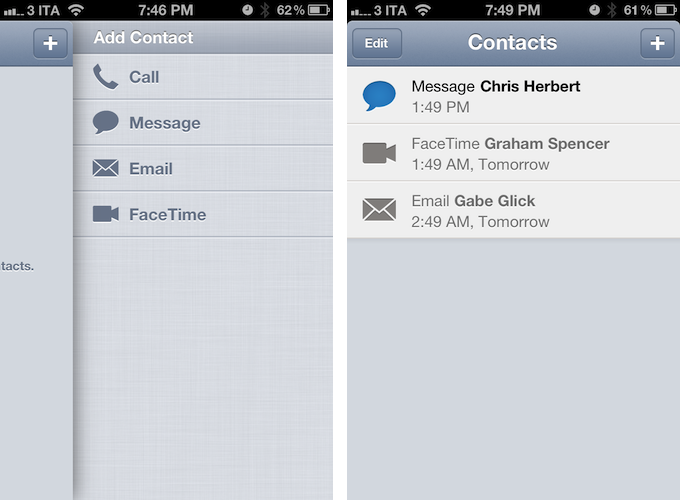 Developed by Caleb Thorson, World Contacts+ is the classic example that, sometimes, good ideas can be remixed and combined to produce something new that’s still fresh and has a place on the market. In the past months, the App Store has seen the rise of “launcher apps” that, through URLs schemes, leverage many iOS apps’ capability of exchanging data and information to facilitate the process of forwarding files, short bits of text, or data. Shortcuts, if you will, collected in a single app that acts as a bridge between the user and all the other apps installed on a device. At MacStories, we’re big fans of Launch Center and Buzz, two apps that take the concept of “quick launcher” and apply it to third-party apps and Address Book contacts, respectively.

World Contacts+ is a bit of both, but stands out on its own because of the very specific approach it takes in regards to quick dials. World Contacts+ keeps a short list of the people you contact the most during the day, and allows you to initiate a call, FaceTime call, send a message or a new email with just one tap. Like Launch Center, it displays a vertical list for your shortcuts. Like Buzz, it allows you to pick contacts from the Address Book, and it uses native iOS frameworks to activate actions like email and iMessages. The app, however, adds a world clock to the mix, allowing you to see the local time for each entry in your list, so you can decide if it’s an appropriate time to call them or text them. The app even cleverly dims contacts that are located in time zones where it’s currently night. To assign a time zone, you simply search for a contact’s location every time you add a new entry to the list.

World Contacts+ isn’t as customizable as Launch Center, or as powerful as Buzz. If you’re looking for more advanced options when it comes to app shortcuts and contacts, go with those apps. But because World Contacts+ cuts the feature set down to a minimum and only adds one very specific feature, I believe the app could have a chance on the App Store for those people, like me, who communicate with people from different timezones on a daily basis. Currently, the MacStories team is made from people living in Italy, the US, Japan, and Australia, and it’s incredibly convenient to know the local time of each person without doing the math every time.

World Contacts+ is available at $0.99 on the App Store.