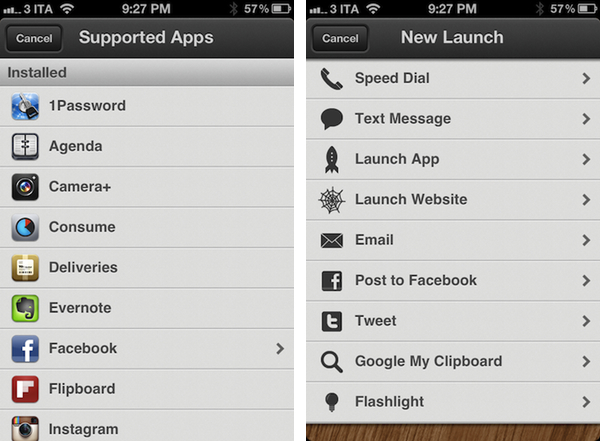 One of my favorite apps in a long time, App Cubby’s Launch Center (our previous coverage here and here), just got a lot better thanks to an update released on the App Store a few minutes ago, version 1.2. Whilst one wouldn’t normally expect an app to get significant improvements in a 1.2 update, Launch Center’s latest version is, I believe, quite possibly the greatest addition to the app since its release, making it extremely easier to discover new third-party apps that can be integrated with no further configuration in Launch Center.

For those who are not familiar with Launch Center already, as we detailed in our previous reviews this utility allows you to set up custom shortcuts on your iPhone to launch common actions or often-used applications with a single tap. Upon firing up Launch Center, you’ll be able to create and manage shortcuts for, say, calling your wife or texting a coworker; you can create a quick action to activate the iPhone’s flashlight, launch a website in Safari, tweet, email someone, or Google your clipboard. As I’ve written before, Launch Center has replaced a bunch of existing apps in my dock thanks to its super-simple approach to aggregating default apps and functionalities that can be triggered through the popular URL schemes you can find documented on websites such as HandleOpenURL. And it’s from this idea of hidden URLs that only a few people know about that App Cubby decided to make Launch Center 1.2 all about app detection and integration.

Launch Center 1.2 leverages your apps’ internal URL schemes to simplify the process of discovering new shortcuts and speeding up your workflow. Launch Center comes with a new section called “Supported Apps” inside the Launch App menu, which lists third-party apps that can work with Launch Center through a URL. Launch Center organizes this list in Installed Apps (the ones you already have on your device) and Featured Apps (which you don’t have installed, and you can get from the App Store). This list of support apps, it turns out, has been built directly by App Cubby and it is hosted on the developers’ servers alongside links to the icons that, as you can see from the screenshots, are served directly to the iPhone and look great on the Retina Display. The reason behind App Cubby’s decision to keep the list of supported apps on their servers is to encourage more developers to get in touch and ask for integration in Launch Center which, ultimately, has a chance of becoming the de-facto solution for quickly accessing apps’ settings/sections/menus using a technology Apple is (seemingly) okay with.

We’d also appreciate help in spreading the word about URL schemes. It’s surprising how few apps support them, and those that do don’t always go very deep with supported actions. If you have an idea for an app and/or action that would make sense in Launch Center, please contact the developer of that app directly and point them to this page.

Launching an app is great, but the true power of Launch Center is in the ability to trigger specific actions deep within an app. For example, while using Tweetbot, you may leave the app buried deep within a search. To launch the app and tweet might take quite a few taps as you have to back out of the search, tap the compose button, select an account, paste text, etc. Launch Center can make that a reliable 2 taps. 1 to open Launch Center and 1 to trigger the action.

In my Launch Center, I was pleased to see many of my most-used apps were already supported. I have set up shortcuts for 1Password, Instagram’s camera and Facebook; I tweaked Tweetbot’s shortcut to jump directly to my Favorites, and created an OmniFocus launch to create a new task “using clipboard for note”. Other apps I see as supported (and installed on my device) include Agenda, Evernote, Consume, Flipboard, Delivery Status Touch, Camera+, Instapaper, Skype, and Reeder. Hopefully a lot more will be coming soon thanks to App Cubby’s decision to make their iOS App URLs page public.

As I said above, Launch Center has become one of my favorite new apps for iPhone. It speeds up my workflow and looks neat, and I look forward to seeing how many developers will get in touch with App Cubby to formally introduce support for Launch Center in their apps (I also would like to see App Cubby figure out a way to fetch icons for any app).

You can find Launch Center 1.2 in the App Store.