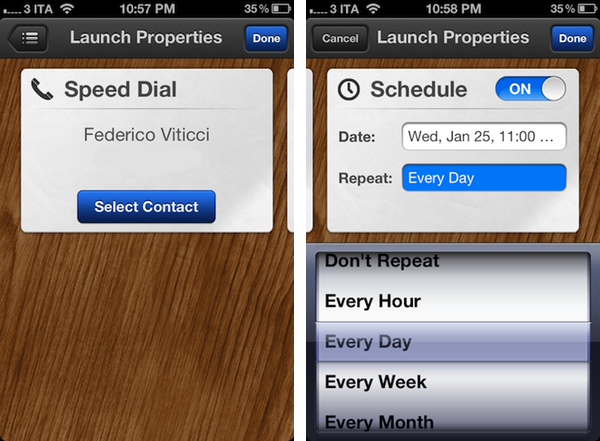 We reviewed App Cubby’s Launch Center when the app was released back in December after Apple rejected an initial version based on Notification Center. Even without fancy Notification Center integration, Launch Center has become one of my new favorite apps, earning a spot in my iPhone’s dock because of its greatest achievement: allowing me to save an unlimited number of shortcuts for actions that I repeat every day (such as calling my mom or iMessaging my team) in a single place. I’d argue that I even prefer Launch Center without Notification Center support as it’s more focused.

And today with version 1.1 it gets even better. Launch Center 1.o, in fact, allowed you to create shortcuts through custom URLs and activate them with a single tap. But you still had to remember you had to do something – you’ve got your nice action to call your dad, but what if you forget to call him? The shortcut becomes useless. Similarly, your iOS device comes with alarms, but you can’t associate actions to them; it’s easy to set an alarm in three hours for something “important”, and forget what it was all about. Launch Center’s new scheduled launch actions are a fantastic mix of shortcuts and alarms: you can now assign a custom alarm to each of your shortcuts. When the time comes, Launch Center will fire off a local iOS notification that will show up in Notification Center, and take you to the configured action…which will activate and call your dad with one tap, to finish the example above. It’s genius.

I use Launch Center every day and I can already see scheduled launch actions becoming an integral part of my workflow – imagine setting up alarms for emails, messages or just about any app you know you’re going to use at a certain point in time. Launch Center 1.1 combines the speed of custom URLs with local notifications to create smart alarms that have both context and the appropriate speed to feel immediate and intuitive.