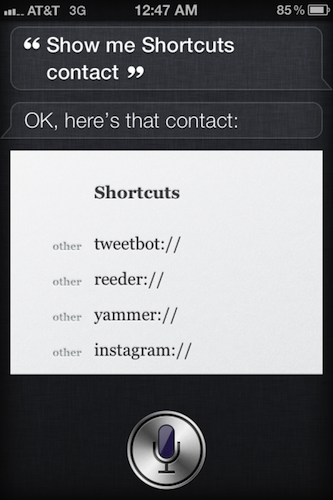 Alex Heath at iDownloadBlog came up with a way to let Siri launch third-party apps on an iPhone. The solution is far from integrated and it requires some tweaking, and it uses an iOS app’s internal URL scheme (example: fb:// for Facebook) and the Address Book to open apps, provided you’ve asked Siri to visualize a “contact card” with some shortcuts in it. You’re basically creating a fake Address Book entry for apps, and assigning a URL scheme to one of the available fields. Tapping on it will open the app or a specific section of the app.

If you have a select number of apps that you’d like to have quick access to with Siri, you could create a “Shortcuts” or “Favorites” contact and add each trigger. Telling Siri to “show shortcuts” would then pull up your list of app shortcuts to open within Siri.

Many have speculated that, in the future, Siri will gain new functionalities including the capability of launching apps directly from its voice-based interface. But wouldn’t it be cool to ask Siri “Open my Facebook messages” rather than just “Open Facebook app”? Or perhaps ask Siri “Go to my OmniFocus Home project” instead of just launching OmniFocus? And what about creating new content from Siri inside a specific section of an app (a new task inside an OmniFocus project), without actually opening it? That’s why I think URL schemes will be worth keeping an eye on – Apple could offer developers a new set of APIs to associate their apps’ sections and menus with Siri actions, and perhaps revamp the URL scheme architecture to include support for Siri and new APIs. This is just speculation on my side, but I think it’d be interesting to see Siri becoming a new, lightweight interface for basic tasks in external apps.

Meanwhile, if you really want to launch apps using Siri and the Address Book, check out iDownloadBlog’s tips here.