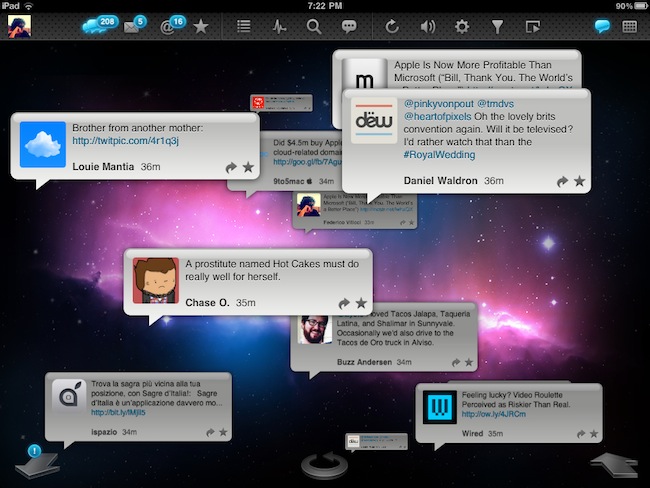 Released yesterday in the App Store at $1.99, TweetyPop wants to offer a different way to read your Twitter timeline and interact with status updates. While regular Twitter clients like Twitter for iPad, Twitterrific and Osfoora are focused on empowering you to read tweets in a vertical timeline which you can interact with to reply, fave tweets, or just discover cool links to check out later, TweetyPop resembles the Mac’s Time Machine in the way it operates: tweets are placed on a three-dimensional space, and you have to move the tweet “bubbles” with your finger to fling them off the screen and move forward in the timeline. Just like Time Machine, you make progress in time: only you have tweets instead of files and you can do stuff with these tweets, too.

The app’s got a traditional list view as well, but that’s not really the point. What TweetyPop wants to achieve – and I guess the reason why the developers created it in the first place – is being the alternative app that lets you sit down and explore Twitter in time. A scrollbar on the right lets you quickly move to a couple of hours ago or a just a few minutes back; big arrows at the bottom allow you to dismiss old tweets and load new ones, or go back in time again. The concept’s really simple if you’re used to Time Machine or Lion’s Versions. In fact, the app’s even got the same space-inspired background that you can’t change. Once you get the hang of it – you can scroll, move tweets around, reply, fave and follow links – you might want to check out the additional icons along the top. These buttons enable you to use Twitter’s usual functionalities like replies, DMs and favorite tweets, as well as lists, trends, or search. In every section, tweets are displayed as bubbles against a Time Machine-esque timeline like in the main page. This might be a little disorienting at first for mentions and direct messages, but I believe TweetyPop wants to disorient you, in a good way. It’s very, very different from anything else I’ve tried on the iPad in a year of existence of the platform.

I also like the fact that the app’s got some interesting options to play with. You can send items to Instapaper or OmniFocus, filter the timeline by “all tweets” or “new tweets only” and enable auto-play to let the app automatically scroll for you and create a slideshow for your tweets. The slideshow speed is configurable in the settings.

At $1.99, I’d give TweetyPop a try if only because it’s different. Sure, it won’t replace Twitter for iPad or Twitterrific, but it has the chance to become that alternative Twitter app that does one thing well and surprises you with its original ideas and interactions. Plus, the time exploration effect for tweets is just neat. Go download the app here. Promo video below.