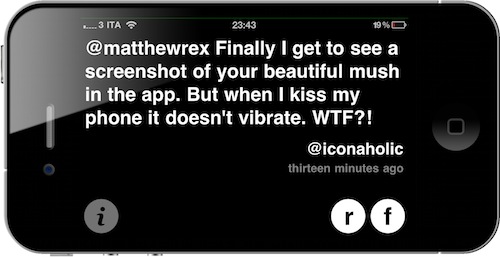 Twitter clients for iPhone and iPad, in spite of their substantial UI differences, are basically all geared towards the Twitter power user who wants to be able to do a lot of stuff with his Twitter timeline: check on users’ profiles, retweet, save to Instapaper, search, access lists, and so forth. Most Twitter clients for iOS are aimed at enabling you to enjoy the full Twitter experience.

Trickle, released a few days ago, is different. It runs on the iPhone and iPad as a universal app, but instead of bringing many of Twitter’s features to mobile devices, it focuses on turning your Apple device into a minimal, Helvetica-based, constantly up-to-date Twitter widget. Perfect for your desk, possibly with your iPhone or iPad in a dock.

Once you sign in with your Twitter credentials (multiple accounts are supported), you’ll get this black background with a tweet in white Helvetica against it. That’s it. You can move between tweets with a swipe, but the app will push new ones as they come in automatically. You can set a refresh time in the preferences. The app works both in portrait and landscape mode.

There are only two buttons on screen: mark as favorite and retweet. As tweets come in, you can tap on the buttons to perform the aforementioned actions. Simple.

At $0.99 in the App Store, Trickle is highly recommended if you’re looking for a new way to read Twitter on your desk. It doesn’t make sense as a client on its own, but the thing’s just beautiful on the iPad in landscape mode, while in your dock.