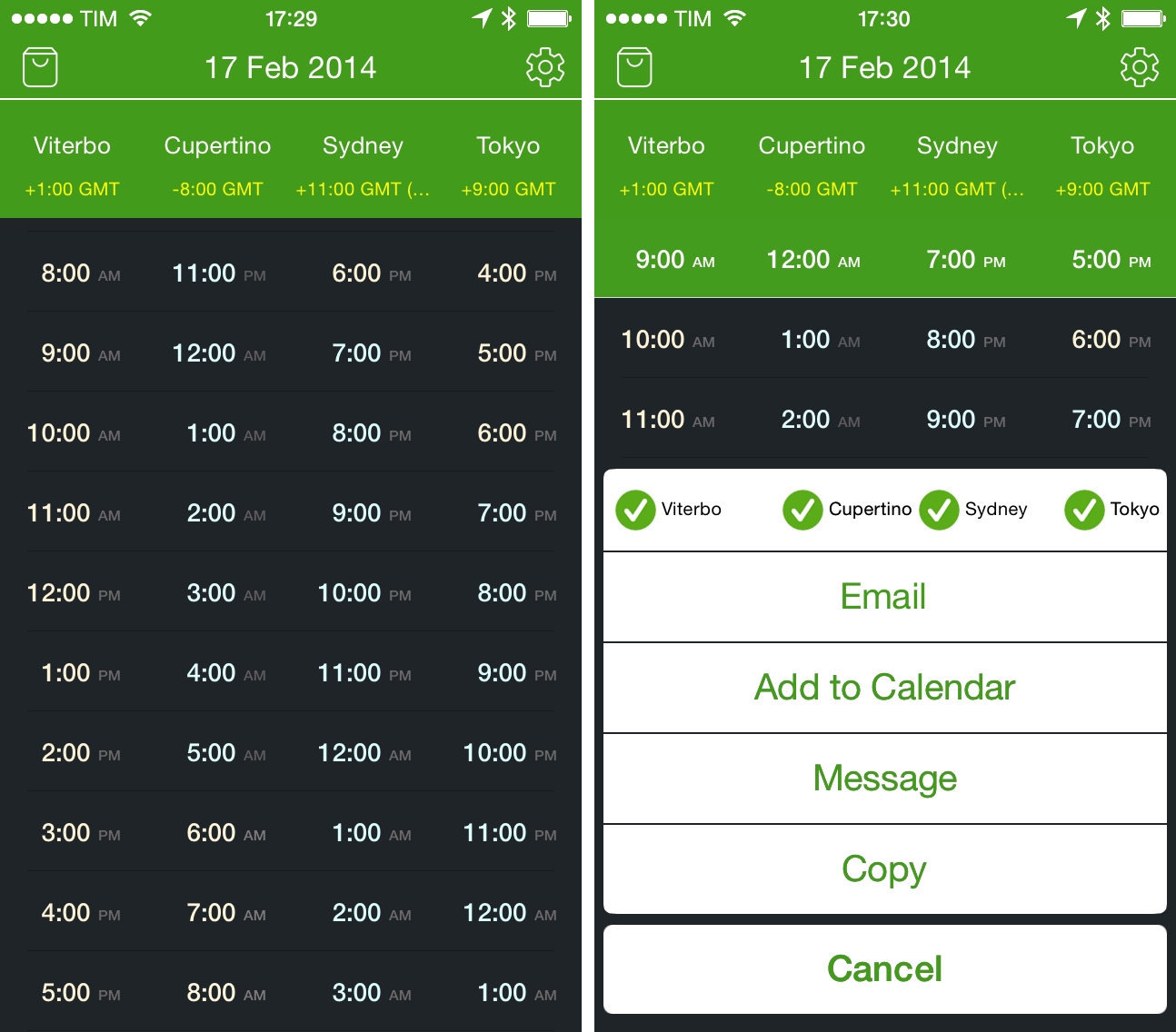 I previously wrote about my need for a time zone conversion utility for iOS when I covered Living Earth, an app that mixes global weather information with regular clock functionalities. I’ve been using Living Earth regularly, and I like it a lot, especially because I find its design polished and interesting. I’ve been wondering, though, whether a simpler approach to quick time zone conversions could work better for me, and I came across World TimeZlider, developed by Creo and available at $0.99 on the App Store.

TimeZlider lets you compare time zones for multiple locations simultaneously by scrolling vertically on the screen to see how time changes across the globe. The app’s core mechanic is straightforward enough, in that you add locations (either with search or with a geographical “Explore” section) and hours (rows) can be compared against locations (columns) as you scroll. There’s no weather information, no maps, and no extraneous fancy effects. TimeZlider only provides time zone conversions at a glance, and there’s no learning curve.

At the top of the screen, the current date is reported in the title bar, with location names and time zones available directly below it for quick reference. While this approach is very close to my ideal time zone conversion utility, I have a few problems with TimeZlider’s design: there’s no way to quickly jump to the current time of the day for your location, and the app doesn’t advance days when converting between time zones (8 PM in Viterbo equals 6 AM in Sydney, but the app doesn’t tell you of which day). The first problem is particularly annoying when trying to use the app just to understand what the current time corresponds to in other parts of the world: because the main screen is so packed with numbers, it can be difficult to scroll and focus on finding the current time, something that isn’t helped by the app’s small font size and lack of any other color differentiation between cities.

From a customer perspective, I also found TimeZlider’s pricing a bit confusing. The app is $0.99 and Universal, but there are three In-App Purchases to unlock “Unlimited schedule & share” (essentially, Email, Calendar, Copy, and Message buttons for sharing), 3 cities, and 4 cities. I had purchased the sharing IAP a while ago, but that didn’t grant me access to the 4 cities option that was added as a separate IAP with the app’s 2.0 update today. I believe that Creo could make the app’s pricing a bit more transparent, perhaps by removing the separate ¾ cities IAPs or by offering a single, Paper-like “unlock everything” IAP.

I like TimeZlider’s underlying concept, but the app could use a better color scheme and changes to how days and current times are displayed. TimeZlider’s basic version, with support for two cities and no sharing features, is available at $0.99 on the App Store.