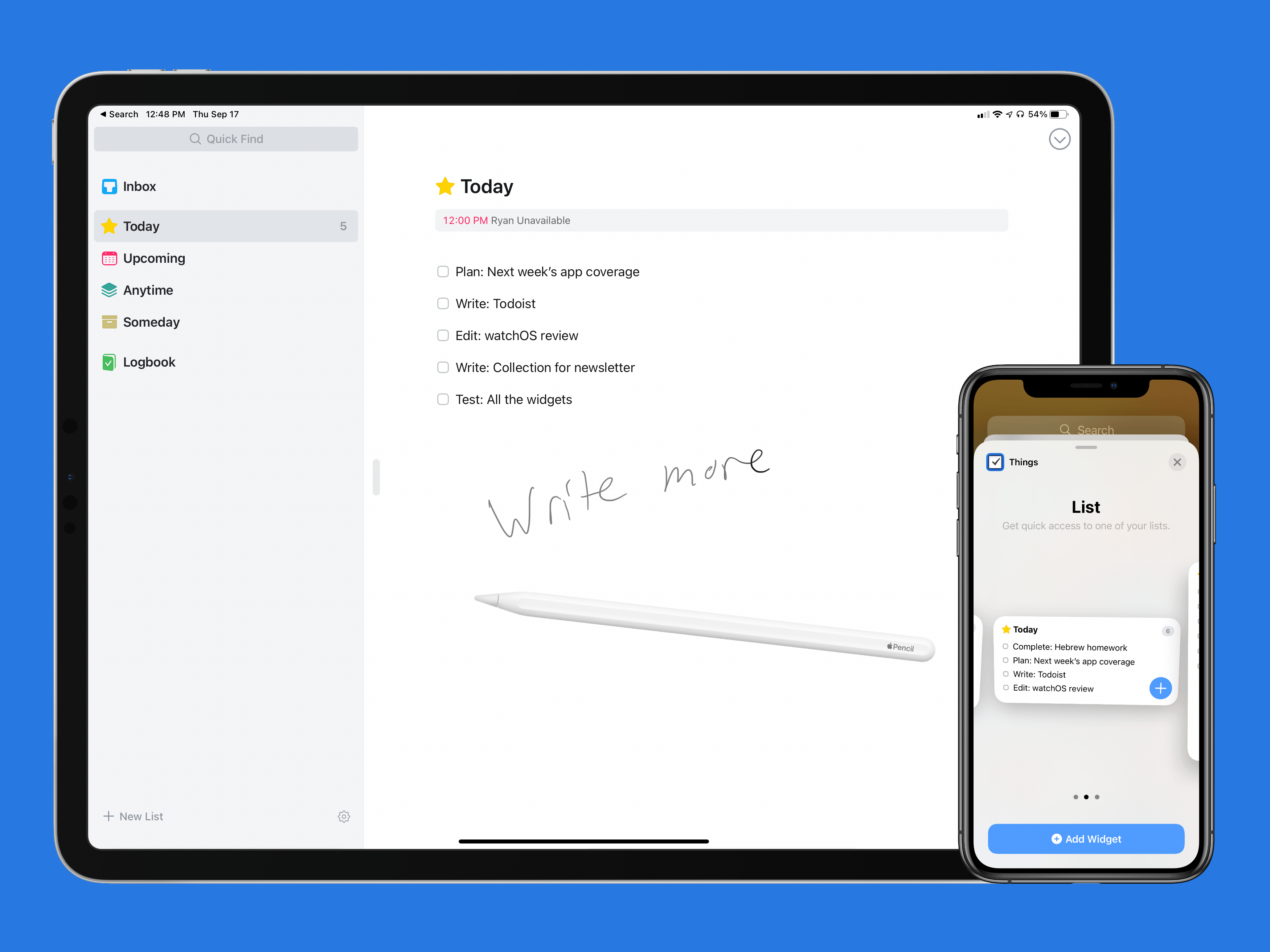 I’ve used Things off and on as my primary task manager for as long as I’ve used Apple devices, which is just over a decade now. During that time the app has been remarkably consistent at supporting new OS features as soon as Apple launches them, and this year is no exception. In its latest update, Things has added new widgets for iOS and iPadOS 14 as well as a unique implementation of Scribble for creating new tasks. Apple Watch users will find a couple useful new complication options too.

On the surface, the update may seem simple and straightforward: new widgets, Scribble support, and new complications. But as the team at Cultured Code has done time and time again, their implementation of new OS technologies is thoughtful and even innovative, especially on iPad.

Things’ widgets focus exclusively on displaying lists of your tasks. You can use a small, medium, or large widget for viewing tasks and configure each widget to show only the exact tasks you want; the medium and large widgets also provide a plus button for creating new tasks. 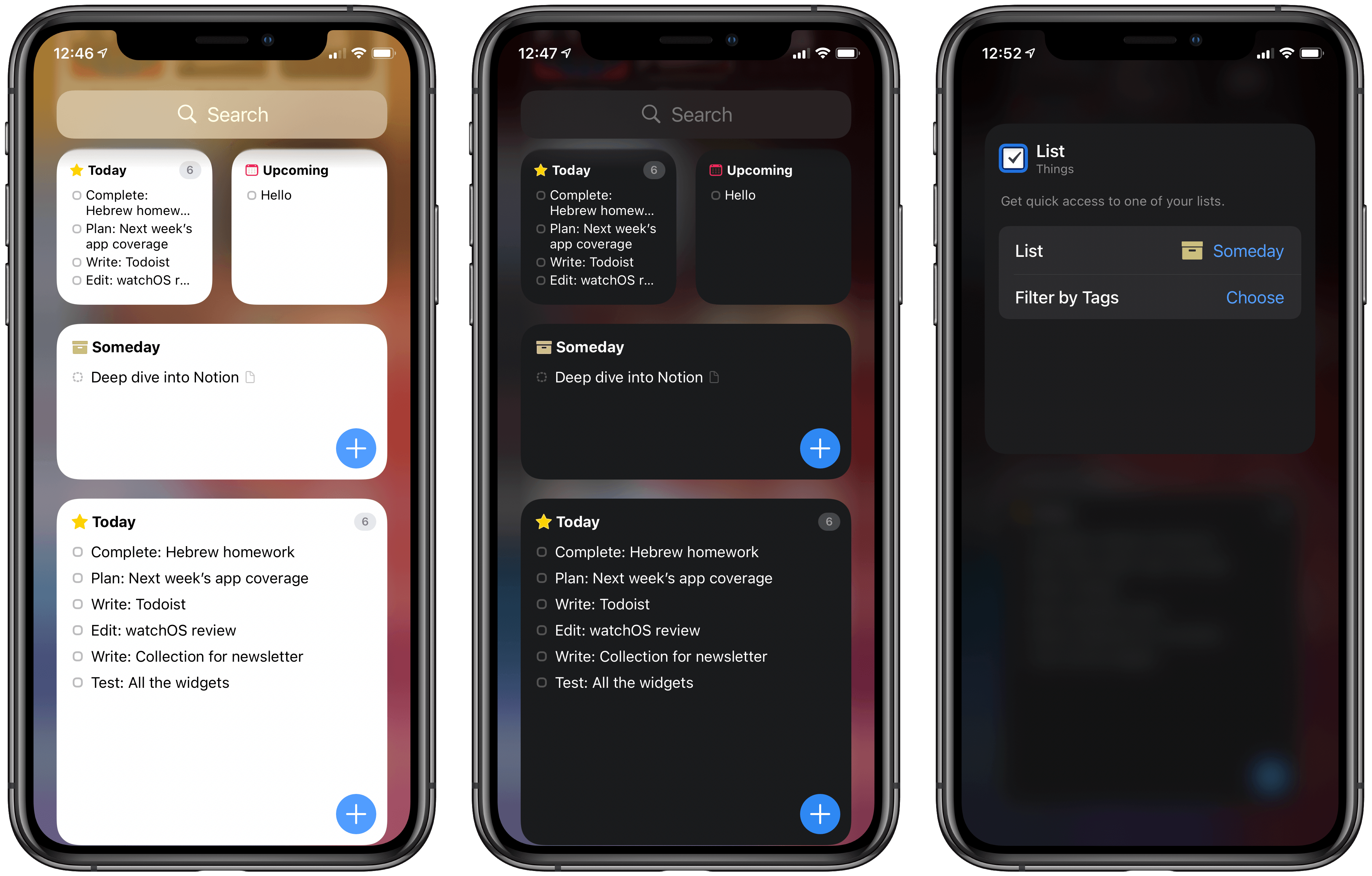 In the widget’s setup mode you can choose which list of tasks to display, such as your Inbox, Today, Upcoming, Anytime, Someday, one of your Projects or Areas, or one of your tags. A nice secondary option enables filtering your chosen list down to only display tasks that contain a certain tag within a given list; for example, you can view tasks that have been tagged ‘Writing’ and are in Today, or in a certain Area. I’ve never been a big user of tags in my task manager, but the ability to filter a widget based on tags makes the feature more valuable than ever.

Due to a limitation in Apple’s new widget system in iOS 14, Things’ widget can no longer offer the ability to check off completed tasks. If that functionality is of great value to you, the old widget is still available as a legacy option, it just can’t be added to the Home screen and will be forced beneath all newer widgets in your Today view.

The trade-off of not having large touch targets for checkboxes is that now Things’ widgets can display a lot more tasks at once. For example, the legacy widget is about the same size as iOS 14’s new medium widget, but it can only display two tasks whereas Things’ new widget shows five in the same space. And on iPad, I like how Things’ developers have tried to negate the loss of checkboxes by creating a smooth alternate flow for checking off tasks: tapping a task in Things’ medium or large widget will open the app with that task highlighted, and thanks to the app’s strong hardware keyboard support, a quick Command + K shortcut will check off the task. It may not be as quick as using the old widget, but highlighting the task so it can be quickly marked complete via a keyboard shortcut is a nice touch.

Using Scribble to create a new task for a specific day.

Another interesting iPad feature is Things’ implementation of Scribble. In iPadOS 14, Scribble enables writing with an Apple Pencil in text fields to have your handwritten text automatically converted to typed text. Apps that use standard text fields will get this new feature without requiring any work from their developers, so with other apps where I’ve tried Scribble, the implementation has always been the same: write in a text field, and iPadOS converts your text. Things does something unique, however, in that you not only can write into any of the app’s text fields with the Pencil, you can also use Scribble in any open space you see in the UI and your written text will convert into a new task.

I would never have thought of an app enabling Scribble in the open spaces of its UI, but after using Things I’m convinced it’s a brilliant idea. Writing in text fields is nice, for sure, but writing on other parts of the screen feels like you’re unlocking a special power in the app. I suppose you could say it’s the equivalent of keyboard shortcuts, but for the Pencil, offering a quicker way to do something than what the UI itself provides.

The feature works inside any list, and I find it especially useful inside Upcoming or in a project containing different headers, as you can Scribble inside the boundaries of the due date you want, or section you want, to have the new task automatically go there. It’s a really clever feature that Pencil users are sure to love. 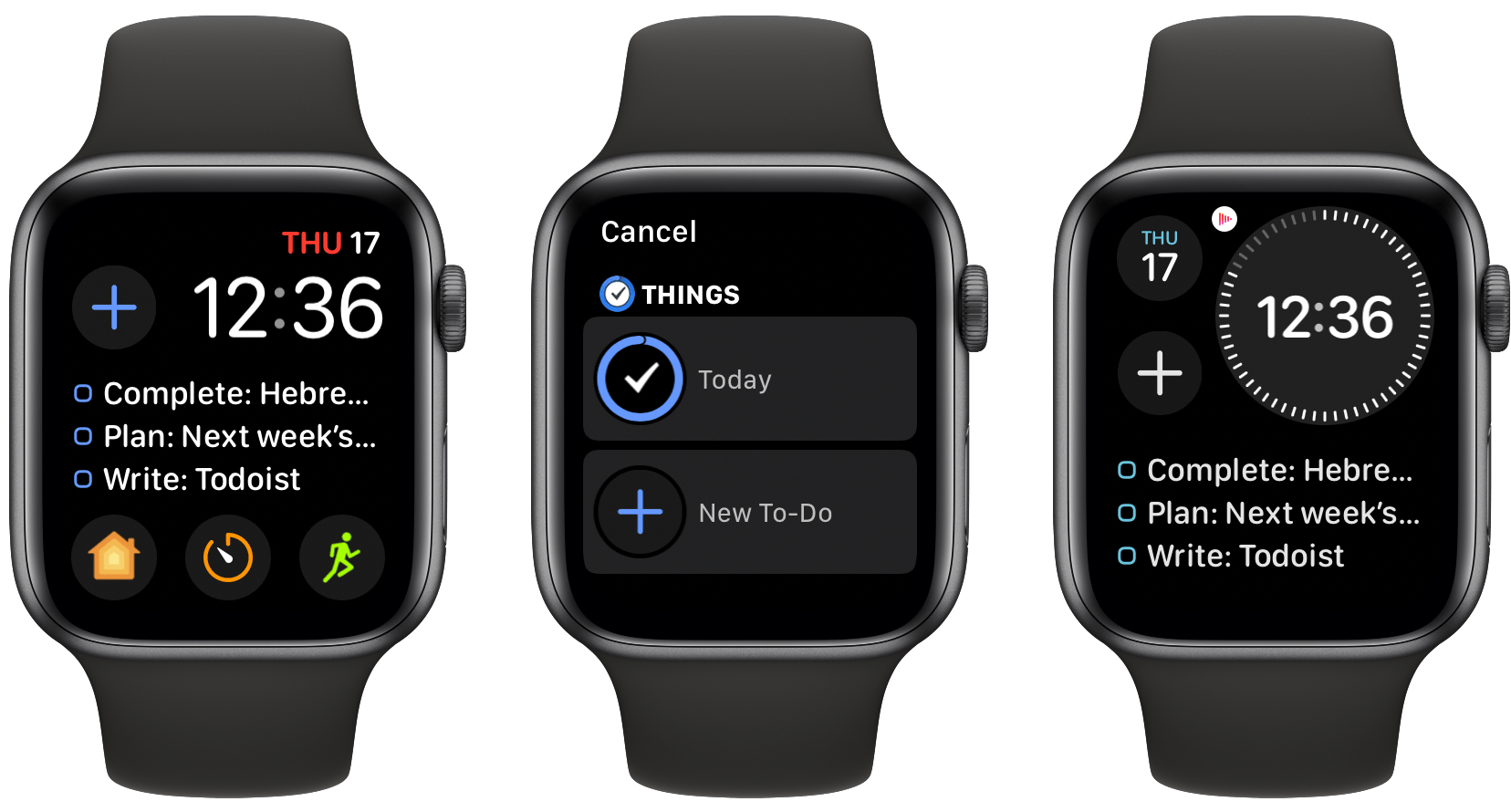 Things already offered some nice Apple Watch complications, but the two additions in this watchOS 7 update are worth highlighting because they cover core task management needs.

The New To-Do complication fits the small round slot on Infograph, Infograph Modular, Modular Compact, California, and more. It displays a simple plus button that quickly launches you into the task creation mode of the app, so if you regularly think of new tasks to add throughout the day, this complication can provide the quickest way to do that.

This year at WWDC, Apple stressed to developers that the best iPad experience takes into account the variety of interaction methods the device supports: touch, keyboard, trackpad, and Pencil. Things now does that better than any app I know. If you need to create a new task, you’re not disadvantaged using one interaction method over another. If you’re using touch or a trackpad, the Magic Plus Button makes task creation easy; with a hardware keyboard there’s a Command + N keyboard shortcut; with the Pencil, you can just use Scribble anywhere to write a task.

It’s hard to find another app that does so well taking into account the variety of use modes for the iPad. Things was the first app to bring full keyboard control to iPadOS, and I think this latest update will forge a similar path forward for Apple Pencil use. I’m already wondering how other developers, inspired by Things, might implement Scribble as a form of shortcut for Pencil users.

Things is available on iPhone and iPad as separate apps.