Announced in December 2012, The Omni Group has today started the public rollout of OmniPresence, their new free automatic document syncing solution for OS X and iOS. OmniPresence, based on open web technologies, is available inside OmniGraffle, OmniGraphSketcher, and OmniOutliner for iPad, and it also comes with a companion Mac app that runs in the menubar.

“The way we are doing it is not to hook it up into some backend proprietary service”, The Omni Group CEO Ken Case told us in an interview during Macworld|iWorld earlier this year. As a long-time user of Omni products such as OmniOutliner for the iPad and Mac, I was eager to see whether Case’s promises of a fast, reliable automatic syncing technology would grow into a stable product capable of fitting seamlessly into my daily workflow. After nearly two months of testing, I’m glad to say that, in some ways, The Omni Group has even exceeded my (already high) expectations.

The key to understanding OmniPresence is that it’s a system that runs on open web server technologies, with The Omni Group providing the syncing logic either as a Mac app, or directly embedded into their native iPad apps. Starting today, customers will be able to turn any compatible Apache web server[1] into an OmniPresence location, effectively hosting their own clouds, retaining control on documents that will be stored in OmniPresence. The Omni Group’s Omni Sync Server will also be offered as a free OmniPresence location for those who don’t want to set up a web server. However, Ken Case told me, OmniPresence’s rollout in Omni Sync Server will be gradual over the next few weeks.

Rather than building document syncing on top of a proprietary service that might not be available to you in five years, we built OmniPresence on top of open server technologies so that anyone can run their own service. If you’re headed to Mars or Antarctica and want to be able to sync documents between devices while you’re there, all you need is a run-of-the-mill server and OmniPresence.

In the past months, I have been able to try OmniPresence both manually (with standalone web servers) and through my personal Omni Sync Server account. Setting up OmniPresence with Omni Sync Server is easy: you download the Mac app or updated iPad apps, you sign in with your existing Omni account, and you start syncing documents. There are some differences between the two experiences that are worth explaining, though.

You can drop documents inside the OmniPresence folder to sync them, and those documents will be available for editing anywhere: while The Omni Group has a specific set of apps, anything – like TextEdit files or photos – can go into OmniPresence. It’ll be up to native apps, especially on iOS, to check which documents they can open and edit. In my tests, I used OmniPresence primarily for OmniOutliner files.

On the Mac, the menubar utility serves the double purpose of acting as a shortcut for OmniPresence folders and checking on sync status. When OmniPresence is syncing changes with the cloud, its icon will show three animated dots; you can click the icon at any time to show a popover containing clickable shortcuts for your Finder folders that are configured with OmniPresence. Multiple folders can be configured – separately – with OmniPresence through Omni Sync Server or your own web server. 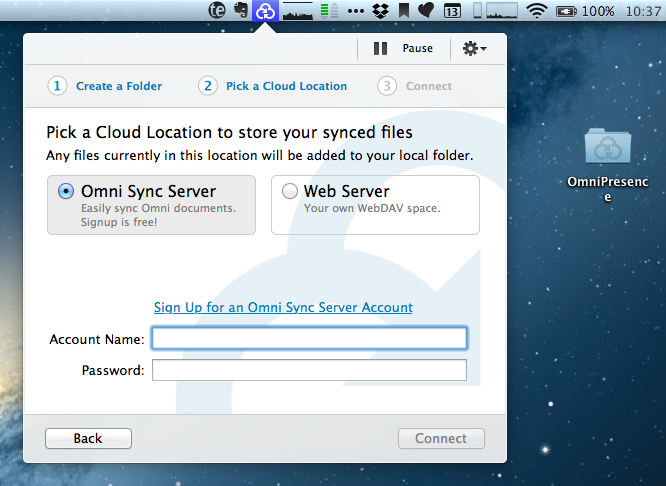 OmniPresence supports standard WebDAV servers such as the one included with Mountain Lion Server; alongside my own Mac mini, I tested OmniPresence with CloudSafe, a storage service that offers encryption, WebDAV access, and a free tier. The setup for OmniPresence with a custom server is slightly more complex: the app will ask you to provide a server URL alongside username and password, and then it’ll check whether the server you want to use is compatible or not. In CloudSafe, I simply had to create a “personal safe”, enable WebDAV access, paste the login credentials into OmniPresence, and the app connected right away.

As Case told us three months ago, Omni Group sees the possibility of running OmniPresence off any web server as a feature that’s not only appealing for enterprise customers: people with small teams for instance, will be able – after some necessary research and setup – to configure OmniPresence for their specific needs, possibly creating multiple accounts for sharing documents, all while using OmniPresence’s syncing engine and compatible apps. But as Case added, “particularly for businesses that do not want to host their data on someone else’s cloud, we think this will be a great solution”.

The Omni Group’s iPad apps have been updated to support OmniPresence. By tapping on the title bar of the apps’ document library, you’ll now a get a popover with shortcuts for local documents, the trash, and OmniPresence locations. If you don’t have any, you can tap on “Cloud Setup” to enter the same setup screen of the Mac version with options for Omni Sync Server and your own web server. There are also options for sharing OmniPresence settings via email and de-activating cellular data – useful if you have a 3G iPad and don’t want to consume data to sync documents (which can get large with inline attachments such as images or audio recordings). 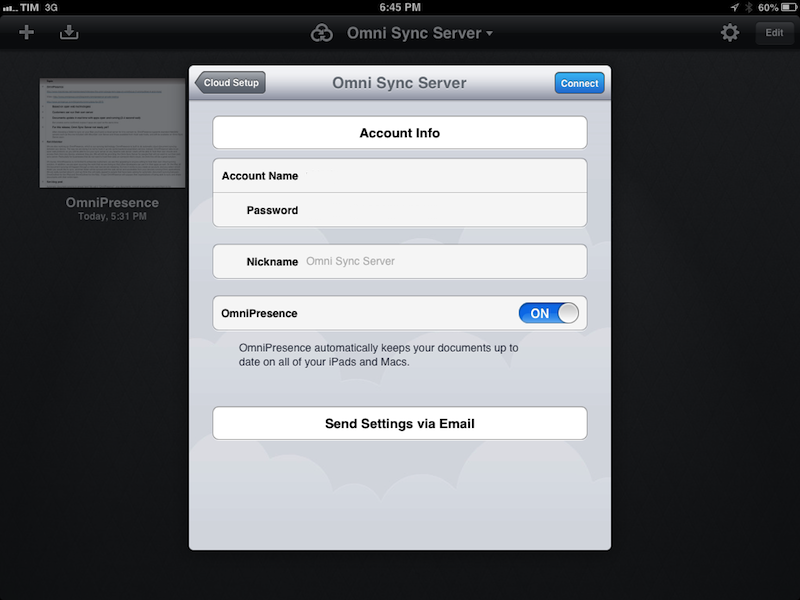 I had a great experience with running OmniPresence on my Mac and syncing documents with the iPad apps. Because sync is automatic, you don’t have to worry about clicking sync buttons to send changes to the cloud, and you’ll always be able to keep an eye on OmniPresence’s status by peeking at its icon in the menubar or title bar on the iPad. Switching between multiple OmniPresence locations was made easy by the title bar popover, and OmniOutliner for iPad even asked me if I wanted to move my outlines from the Local Documents area into OmniPresence; I declined, and I moved the documents manually using a new Move menu.

More impressively, The Omni Group built OmniPresence in a way that documents are updated in real-time when an app is already running: in testing OmniOutliner for iPad alongside the Mac app, changes I made to a document were synced after seconds to the other app with the open document simply refreshing itself. It worked exactly as shown by The Omni Group in this video:

OmniPresence was also quite capable when it came down to handling conflicted copies of the same file. When testing, for instance, Dropbox-enabled apps and editing the same document simultaneously on multiple devices, it’s a common occurrence to end up with conflicted copies for changes registered on separate devices but not yet saved to the cloud. With the final version of OmniPresence, I only ended up with a conflicted copy once when typing on two devices at the same time; in normal usage (edit on the Mac, pick the iPad when getting out of the house), I didn’t run into any issues thanks to OmniPresence’s frequent (and fast) syncing. Overall, I found OmniPresence to be fast and well-integrated both with the Finder and The Omni Group’s iPad apps.

After years of no sync, it feels good to be using iPad apps from The Omni Group that sync with the cloud automatically without having to manually export and import documents. OmniPresence is free and reliable, but there are some questions that need to be asked for this first version. Is OmniPresence worth it after three years? Why not Dropbox? How will it work with other iOS apps?

OmniPresence’s biggest problem right now is that Omni Sync Server accounts will receive OmniPresence support gradually, and that, while available in the OS X Finder, iOS’ sandboxing will force third-party developers to manually add OmniPresence support to their apps (through an open-source SDK). This means that, today, customers will likely have to configure OmniPresence with their web server or a free service like CloudSafe if they want to try it – with a limited choice of supporting iOS clients. It would be nice to have support for OmniPresence in apps like CarbonFin Outliner[2], Readdle Documents, or GoodReader – but I guess that will take some time.

Unlike Dropbox, OmniPresence doesn’t come with a full-featured web app to access and monitor your files from anywhere. This may sound problematic when considering how Dropbox lets you browse and restore old versions of a file through its website, but because OmniPresence is a Mac app that saves files to the Finder, it also means you’ll get support for native OS X Versions just like any other document on your Mac. As you can guess, another downside of the iOS apps is that lack of Versions support won’t let you see older revisions of documents directly on the iPad; the Dropbox SDK is more advanced in this regard, with apps like WriteUp having shown how to implement Dropbox revisions on iOS.[3]

I believe The Omni Group is doing the right thing with OmniPresence: they looked at Dropbox and iCloud, but they decided to build their own sync using open web technologies, publishing their source code so that other developers will be able to integrate it in more iOS apps. And while Dropbox may be more popular and widespread, if its sync wasn’t suited for Omni’s documents, then the only possible move was to develop a new system from scratch. The fact that OmniPresence can run on any compatible web server – not forcing customers into The Omni Group’s cloud – is a fantastic plus for the extra security and control it offers.

OmniPresence is off to a very solid start, and I’m looking forward to future integrations with other third-party apps. You can download the OmniPresence Mac app for free from The Omni Group’s website, and check on the status of your Omni Sync Server account here.