I’ve been a fan of Terminology by Agile Tortoise since it debuted in 2010. There are a lot of dictionary apps on the App Store, but most are bloated messes that foist multimedia experiences and games on me when all I want is a definition or synonym. Terminology has alway been just about words. With today’s update, the app has been redesigned from the ground up with new features that make it a must-have research tool for anyone who writes.

Terminology combines a dictionary, thesaurus, and word research tool in a single integrated package. From the home view, you can search for words, search using text on your clipboard, view words you marked as favorites, or view your search history. Each word entry includes a concise definition, synonyms, and any antonyms, as well as similar and related words, all of which can be tapped to take you to their definitions. Navigating through a trail of words is done with forward and back buttons or by using the history view. 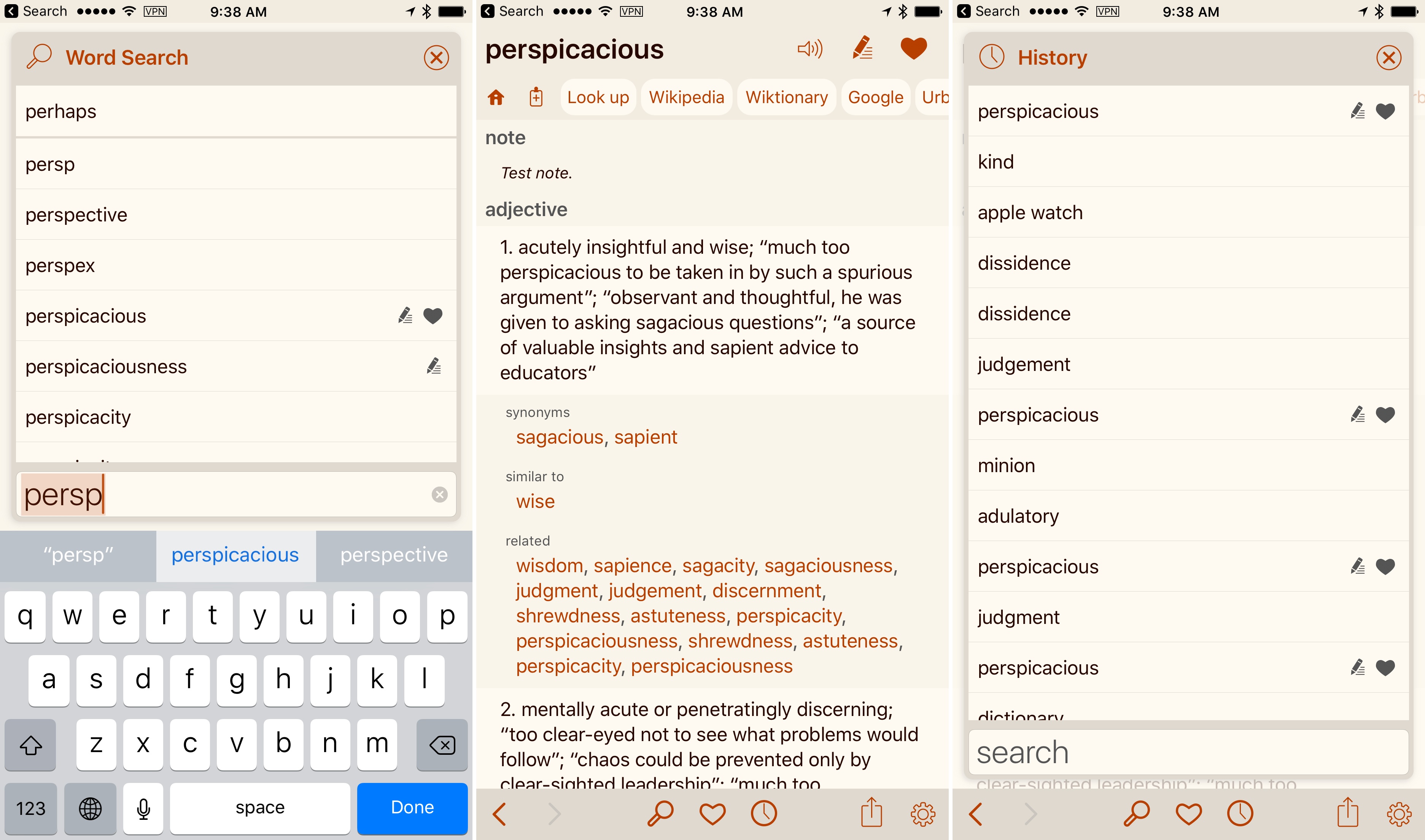 Search, the entry for ‘perspicacious,’ and my search history.

Words can be marked as favorites and have notes attached to them using the buttons at the top of the definition view. One nice touch is that search results indicate whether a word has been marked as a favorite or has an attached note. You can also hear a word spoken by tapping the speaker icon. The second row of buttons includes a home button to return to Terminology’s home view, a clipboard button to copy the current word to the clipboard, and a row of action buttons.

Actions are new to Terminology. The app includes 27 predefined actions like Apple’s ‘Look Up’ feature that accesses the system dictionary, ‘Wikipedia,’ ‘Wiktionary,’ and ‘Google.’ Tapping on any of the action buttons initiates a search on those services using the word you are viewing. Additional actions can be found under an ‘other resources’ section at the bottom of the entry for a word. The actions displayed in both places can be rearranged, deleted, and new ones added by tapping on the pencil button next to the top row of actions. 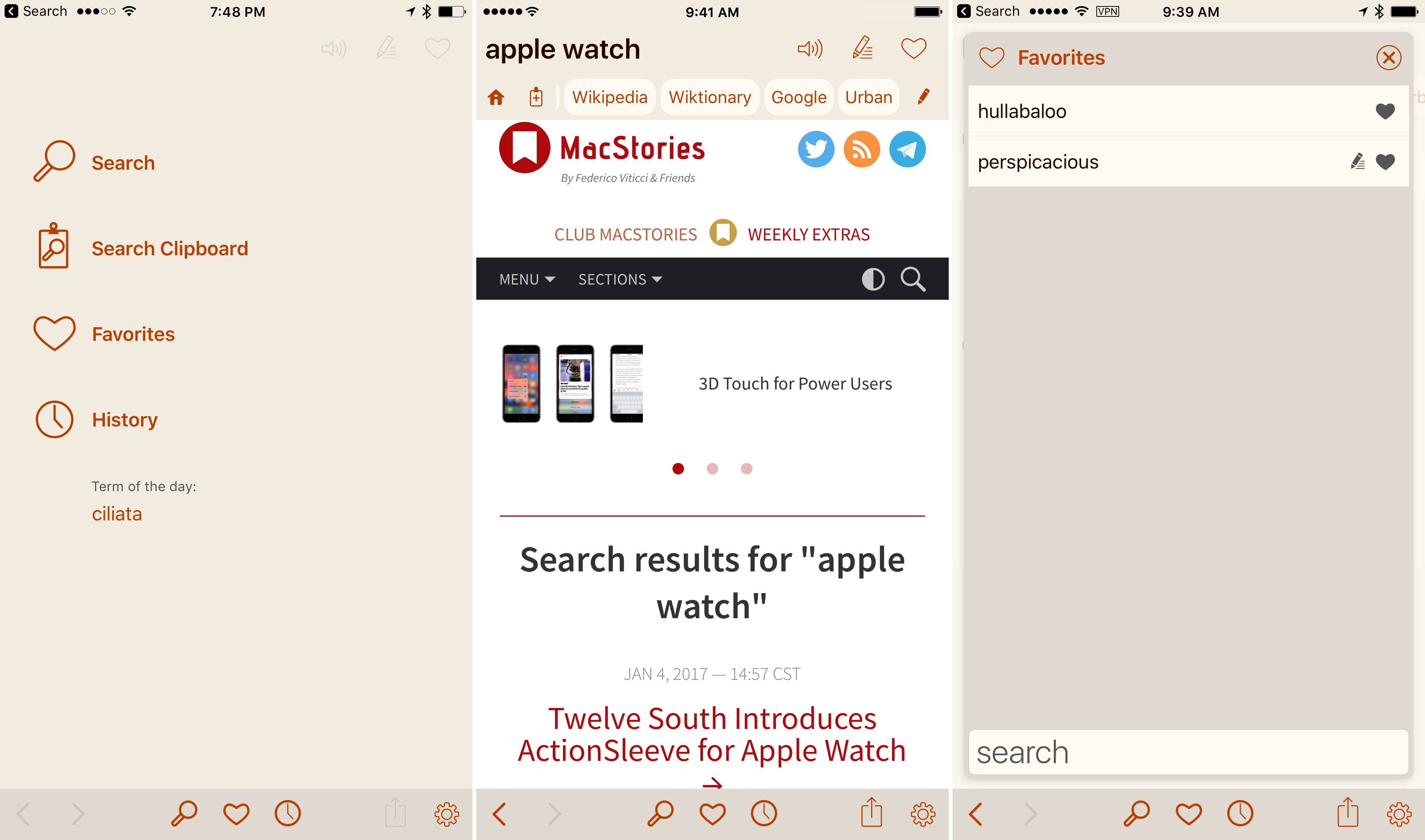 Users who purchase the ‘Pro’ In-App Purchase can create custom actions. For example, I created a custom action that takes a word or phrase and searches for it on MacStories for those times when I want to see what the accepted capitalization is for an Apple product name or technology. The syntax is simple: https://www.macstories.net/?s=[[term]], where ‘term’ is the word you have searched for using Terminology.

Terminology uses iCloud to sync and backup actions, notes, and history among multiple iOS devices. The app also supports Split View on the iPad Pro, which many other dictionary apps do not. A share button lets you share a word and its definition to other apps formatted in Markdown using the system share sheet. Pro users can also switch to a dark mode, which I’ve enjoyed using in Split View next to Ulysses and iA Writer with their dark themes.

I’ve saved one of the best new features of Terminology for last: its extension. With iOS 9, Apple made extensions accessible from the contextual menu that pops up when you select text. For Terminology, this means you can select a word, tap ‘Share,’ and open Terminology’s extension, complete with the selection’s definition, synonyms, antonyms, and related words. Virtually every other feature of Terminology is available as well. As a result, instead of dedicating one of my iPad’s two Split View slots to Terminology, I can use a text editor and another app like Safari or Notes, and still take advantage of Terminology from within any of those apps.

Terminology 4.0 shares some of the functionality of earlier versions, but in many respects, this is an entirely new app. The addition of an extension, notes, sync, a dark theme, and an action library that can be extended with custom actions make Terminology a one-stop destination for all your word needs.

Terminology’s business model has been rethought too. The app is now available on the App Store as a free download with ads. A $1.99 In-App Purchase removes the ads and adds the dark theme and ability to create custom actions, which I suspect anyone who ends up using Terminology as often as I do will want to purchase.