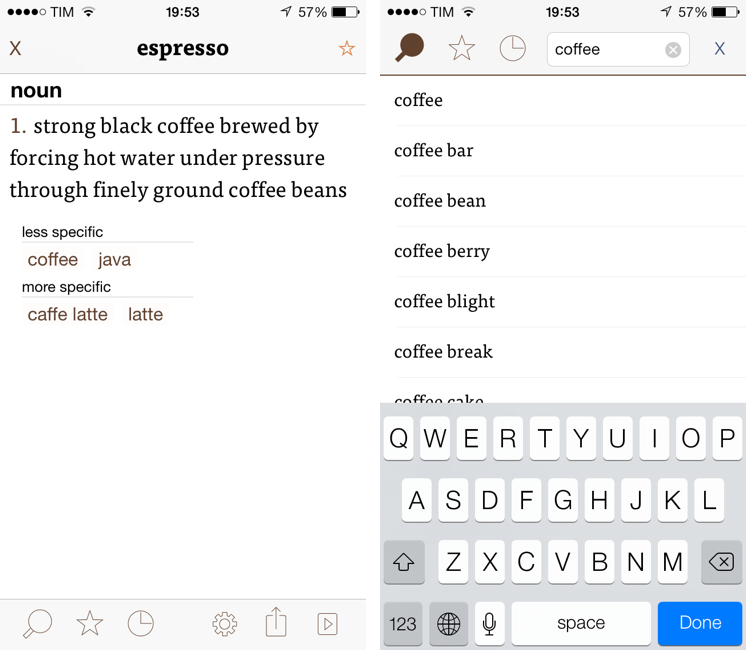 Less popular than Drafts but equally impressive in terms of functionality and inter-app communication, Greg Pierce’s Terminology, a dictionary and thesaurus app for iOS, is relaunching today for iOS 7 with a new Universal app that adds sync, configurable actions, and a redesign that matches iOS’ new general aesthetic. I have been testing Terminology 3 for the past few months, and this new version holds up to expectations by honoring Terminology’s tradition of simplicity and bringing powerful new features.

We first reviewed Terminology in 2010, when it was an iPad-only app that already showed how developer Greg Pierce wanted to focus on words and definitions rather than heavily custom graphics and fancy effects. A few months after the iPad version, Pierce released a standalone iPhone version, called Terminology Ph, that carried all the features of the tablet counterpart onto the smaller screen; a year after version 1.0, Terminology 2.0 was released, refining the user interface and adding new app integrations. Throughout 2011, 2012, and the better part of this year, Pierce maintained Terminology with compatibilty updates but otherwise focused on Drafts, which, as MacStories readers know, has contributed to redefining iOS automation and the idea of a “quick notepad” for iOS.

The new Terminology represents a break from the past, fully embracing iOS 7’s new design philosophy and offering customers an easier purchase experience with a Universal version. As a new app, you will have to buy Terminology again – something that is perfectly acceptable after three years of usage of the same app.

Terminology’s new design is unmistakably iOS 7-y, with only a few surprises. The app focuses on presenting word definitions and links, with the larger part of the screen dedicated to text and two toolbars at the top and bottom of the app to close a word’s definition, mark a word as starred, and access Terminology’s other views and actions. Given the abundance of whitespace, Pierce has focused on keeping Terminology’s identity through the use of color: buttons and links use Terminology’s traditional brown and yellow tones, and every menu (search, font controls, history, etc) gains iOS 7’s new default appearance out of the box. I wouldn’t say that the new design makes Terminology the most unique iOS 7 app released to date, but then again I wasn’t the biggest fan of Terminology’s old heavy-handed use of textures and UI chrome. It may be a little “obvious” in some areas, but I like how Terminology fits with iOS 7’s theme and I appreciate the subtle touches that Pierce has added in some areas of the UI.

The app’s core feature, search, is now available through a button in the lower left corner of the app in the bottom toolbar: hit the button, and a search field comes up showing the iOS keyboard, ready to type and filter down Terminology’s built-in words to your query. Opening search isn’t strictly about launching the search view as much as it is about launching the area where you’ll always find search, starred items, and history: these three views are grouped together, so tapping any of them will bring up a view where you can tap the area you want to switch to. The currently selected area is indicated by a “filled” icon; the opening animation of the search/starred/history view could be faster.

A nice shortcut of the new Terminology is the swipe gesture to open search: mirroring iOS 7’s new Back gesture (swipe right from the left edge of the screen), you can simply swipe to start searching. I find this gesture faster than reaching out to the search button.

The search view also reveals how Terminology deals with “layers” of content: to close search and go back to the main view, you have to hit an “x” button in the top right corner; to “close a word” from the main view, you have to type the same button, but this time in the top left corner. In order to eschew the need of multiple screens or a sidebar for navigation, Pierce resorted to this stacked word and search view that is easy to dismiss with a button but that has the downside of lacking a way to tell you how many layers (words) you have open at the moment. There is no way to instantly close all open words at once – you have to go through each one of them and hit the close button to get to a pristine main view. This can be confusing – and annoying –but, in the end, it’s no big deal. It just means that the app doesn’t have any concept of “going back” as you simply have to close the current view. 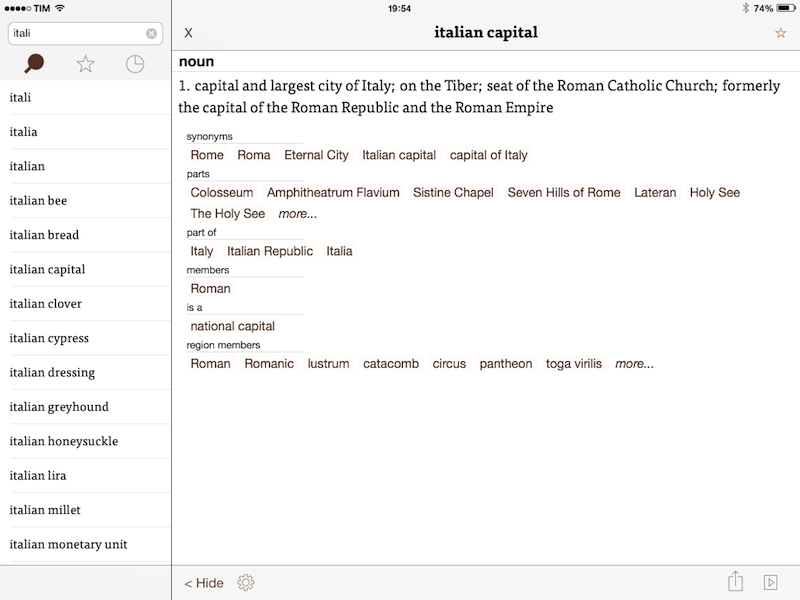 Word definitions are clean and informative as usual. The word type is highlighted in bold, with definitions using the font specified in the Settings (the default one is Tisa, and I love it). Links to synonyms, related words, and groups are brown and you can tap on them to navigate through the app and explore Terminology’s database of words and expressions. The database itself is bigger as Pierce updated the included definitions for iOS 7, although I still wish Terminology would find more common phrases used in the English language.

Once you’ve found a definition you were looking for, you can use the system share sheet to share via AirDrop, built-in services, Drafts (if installed), or to copy a definition. Upon sharing, Terminology will include a word’s entire list of definitions and related words formatted in Markdown. If you don’t want to use the share sheet, you can also manually select a word and copy it to the clipboard, or use the extra Te:Lookup option of the copy & paste menu to keep navigating inside Terminology by looking up the currently selected word. The latter is another nice touch that I like.

Following his experience with Drafts, it shouldn’t come as a surprise that Terminology 3 packs a custom action builder to craft your own sharing actions for words, links, and definitions. With actions – which are kept in sync using iCloud along with history and favorites – you’ll be able to create your personal sharing services to let Terminology send data to other apps or external websites. 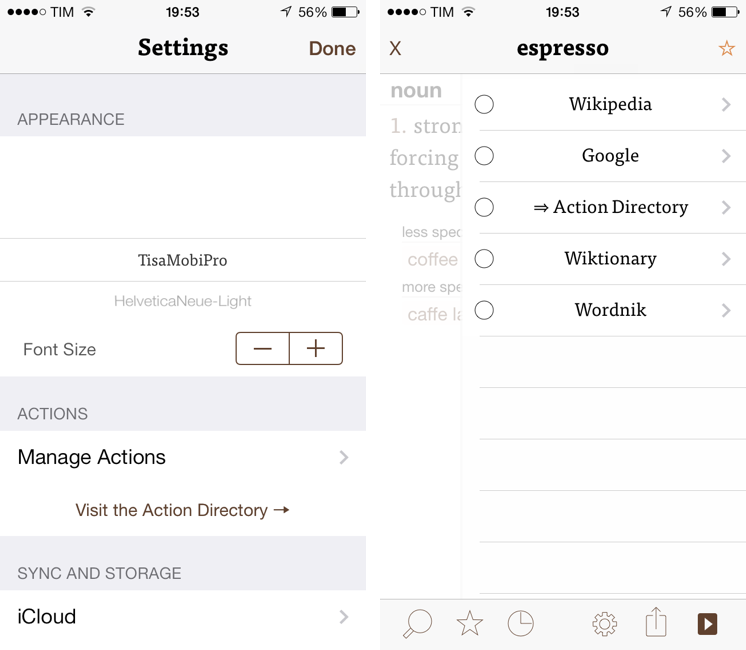 The action builder is similar to Drafts’ one in that it allows you mix built-in tags with any URL scheme. Tags are shortcuts that, upon firing an action, are expended to the full contents of their text. There are four of them:

As in Drafts 3, multiple tags can be inserted in a custom action, mixing them with plain text to create powerful template for personalized actions.[1] For instance, here’s an action to open the current term in Google search:

Or one to send a word’s definition to a “Definitions.txt” file in Editorial:

Again, if you’re familiar with Drafts, you should be able to get started with Terminology actions in no time. Personally, I don’t use them as much as Drafts actions (for obvious reasons, as I generally use Terminology to quickly lookup a word), but I believe they are a great addition for those who will rely on the app as a reference tool and, generally, they are in line with Pierce’s offerings on iOS. An Action Directory shaped after Drafts’ one will be launched with the app today, too.

Actions are available in a sidebar that pops up on the right side of the screen by hitting a button in the bottom toolbar (or swiping to the left). The sidebar is reminiscent of Drafts for iPad’s sharing menu, and I’ve come to prefer it to Drafts for iPhone’s bottom menu. On iOS 7, the opening animation uses a lovely “bounce” effect that is fast, subtle, and pleasant to see.

Also of note is Terminology’s own support for x-callback-url. Terminology was the first app to implement x-callback-url with Instapaper[2], and this new version continues down the road of inter-app communication through callbacks. The existing URL scheme of Terminology 2 will keep working with Terminology 3, and the UI for automatically going back to other apps has been redesigned to fit the new iOS 7 theme.

With Terminology callbacks, it’s possible to build nice automated workflows that let you quickly lookup a word and go back to another app or URL. If you don’t want to rely on iOS’ built-in dictionary (in spite of the improvements in this area with iOS 7), you can leverage the Terminology URL scheme to chain apps and roll your own Define menu.

Terminology 3 is my go-to dictionary app: it may have lost its custom design in the transition to iOS 7, but if you, like me, weren’t a fan of the app’s previous look, you’ll welcome the cleaner look that focuses on words and definitions. Sync has worked reliably for me, and the app’s new actions enhance Terminology’s capabilities even further. Support for x-callback-url means that power users will be able to chain Terminology with other apps in their workflows, and, overall, I believe that the new Terminology provides the right mix of clean presentation, ease of use, and advanced functionality.