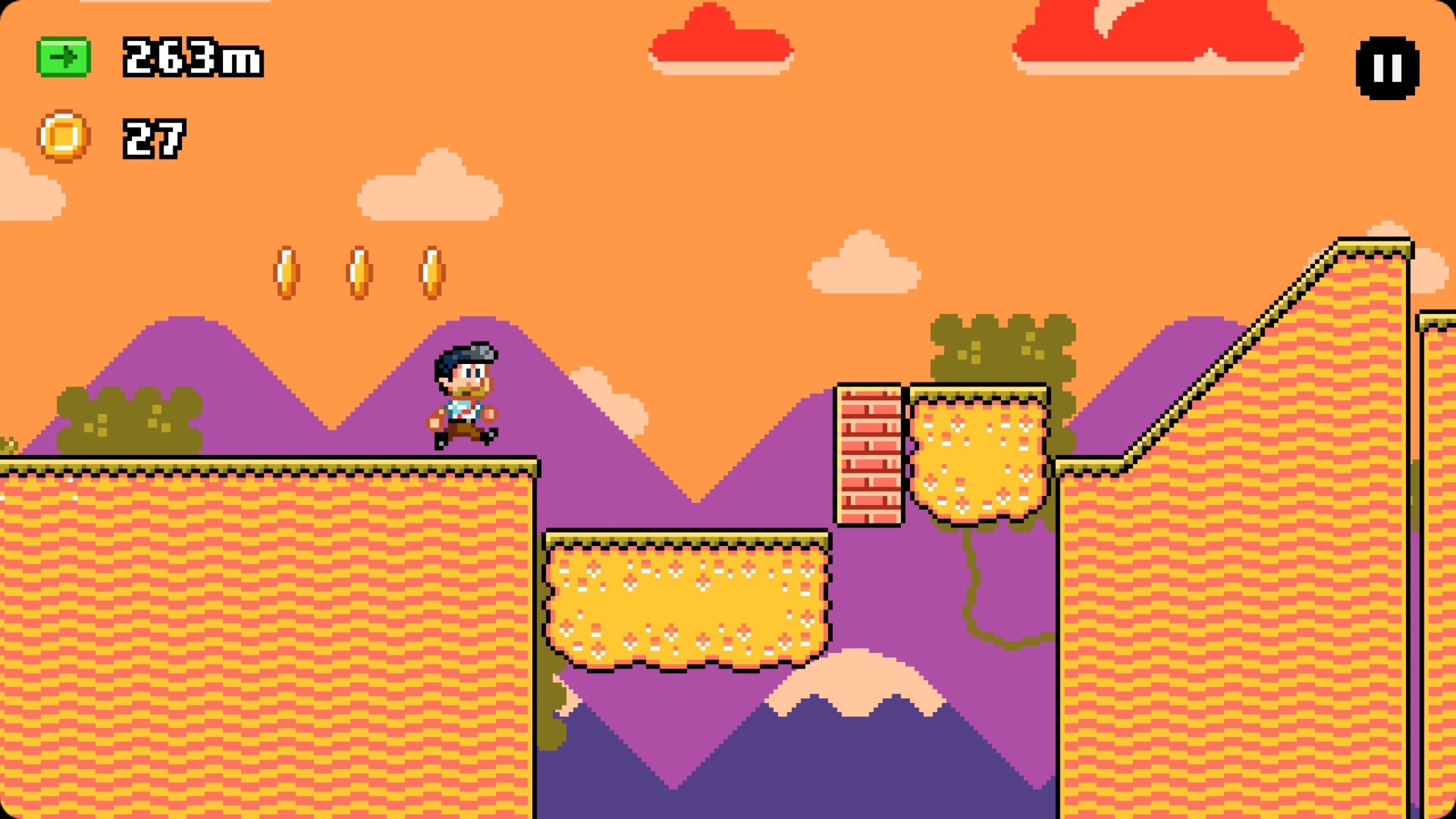 One of my first memories of a portable platform game takes place in the summer of 1996 and it involves Super Mario Land 2 for the original Game Boy. I was 8, and until that point, my only console experience had been with a Super Nintendo my parents bought me for Christmas. I could play with it a few hours each week, which didn’t satiate my infinite curiosity for videogames. When I saw Super Mario Land 2 on a friend’s Game Boy, I was taken aback by two distinct aspects: the contagious fun of a platformer (my only SNES game was Stunt Race FX – don’t ask) and its ubiquitous availability – provided you had enough daylight and 4 AA batteries.

Later that year, I convinced my mom to buy me a Game Boy. A couple of years later, I got a Game Boy Color. For the past 20 years, portable consoles and Nintendo’s Mario games have shaped my taste in videogames and defined my moments of quiet downtime. From Super Mario Advance 1 and 3 (both remakes of games I had never played) to New Super Mario Bros and, to an extent, the recent Super Mario Run for iOS, all my favorite 2D platform games agreed on a basic idea: you control a surprisingly athletic plumber who runs and jumps from left to right.

Conversely, Stagehand, the latest creation by Big Bucket (makers of The Incident and Space Age), upends decades of platformer conventions by turning the genre on its head. You don’t maneuver a character with meticulously timed jumps across retro-styled stages filled with floating platforms and spikes; rather, you sloppily modify the stage itself with touch, dragging platforms to accomodate the hero’s run and making sure he doesn’t run headfirst into cliffs, fall into pits, or get eaten by the inexorable advance of the left side of the stage.

Stagehand is an endless runner combined with a dynamic platform game, only you don’t control the character – you facilitate his run by reshaping the stage around him.

This novel idea – conceived by Big Bucket’s Matt Comi and Neven Mrgan – may sound like a pretentious gimmick, but after some initial moments of confusion and panic, it demonstrates how a simple twist (control the stage instead of the character) can foster a deep and strategic mechanic.

Consider Mario’s iconic brick blocks, for instance. In one of its many throwbacks to classic arcade and platform games (including a delightful use of parallax layers), Stagehand features brick blocks in a variety of sizes, lengths, and orientations. Because of the game’s inverted approach to running, however, these canonical elements become obstacles to avoid rather than innocuous objects to destroy for free coins.

Brick blocks: both platforms and obstacles in Stagehand.

In Stagehand, non-terrain pieces such as brick blocks can’t be moved vertically; if you run into one and can’t move further, the stage will continue to swiftly move toward the right side, you’ll be stuck, and you’ll lose.

Every run through Stagehand’s procedurally generated courses is a fine balance of swipe dexterity, keeping momentum via speed-boosting platforms and jumps, and forging a path ahead by planning where Frank – The Incident’s returning protagonist – will land.

This tension between immediate hurdles and pondering your next move is what defines Stagehand’s gameplay. Combined with Frank’s ability to perform small jumps automatically, the pursuit of coins, and Cabel Sasser’s memorable soundtrack, the result is a title with plenty of character and a unique blend of platformer norms reimagined to fit the game’s foundation.

And it works. Once you move past the perplexity caused by indirect manipulation of the character, you’ll start to think the way a god-like puppeteer would think about his creation. Should I swipe this platform down to combine it with the upcoming chains of coins underneath, or elevate it to make Frank jump and skip three platforms in a row? What if a jump is too high and I lose control of Frank, causing him to fall into a lava pit I didn’t see coming?

Somehow, this mix of falls and jumps driven by adjustable platforms soon starts making sense within the miniaturized universe of The Stagehand – much like you didn’t question why most of modern civilization’s manufactured goods would fall from the sky in The Incident, but simply avoided them. A physics engine that makes Frank react credibly helps maintain this illusion, yielding a type of gameplay that will require you to pay attention to how quickly you have to swipe to let Frank jump or trot based on the platform he’s on. Stagehand’s “gimmick” becomes a plausible raison d’être for Frank’s effort, and an infuriatingly fun exploitation of the iPhone’s touch hardware.

Like The Incident, and more so than Space Age, Stagehand can only exist on iOS. Stagehand hasn’t been adapted for touch controls just to reach a larger audience; it’s a game tailored to the iPhone’s touch screen, built around the premise of swiping platforms to create an optimal path for the ever-escaping character. No other control system would do Stagehand justice.

The iPhone 7 deserves a special mention here. Comi and Mrgan delivered an exceptional use of haptic feedback in Stagehand, leveraging individual thuds for heavy landings and a series of buzz-like taps to simulate Frank’s legs sprinting on a boosting platform. It’s hard to convey, but the Taptic Engine makes Stagehand even more peculiar and fun on the iPhone 7. 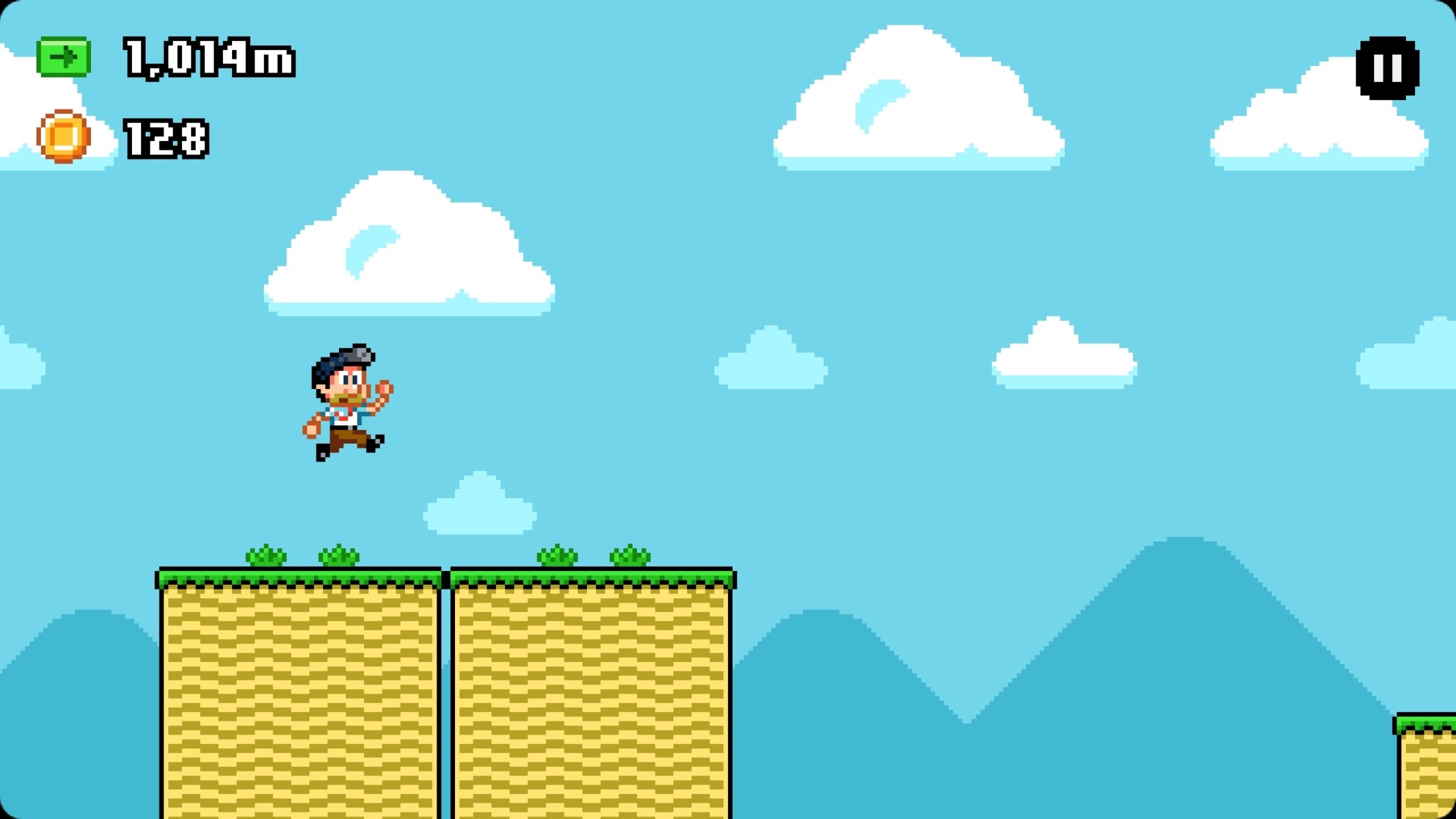 This landing will produce a subtle tap with the iPhone 7’s Taptic Engine.

Stagehand is a game with a steep learning curve that takes a long time to master. I spent the first 30 minutes rewiring my brain after two decades of platform games and the past 2 months trying to beat my high score (I did, two days ago). I don’t know if I’ll ever manage to break the 4,000-meter ceiling, but it doesn’t matter. In every session, I’m motivated by my friends’ high scores1, humming along to Sasser’s theme song while I’m focused on keeping Frank’s movements under control. Stagehand is delightfully difficult but always fair and true to its rules.

I would have liked to see more variety in Stagehand. Stages, even with a day/night cycle that alters the colors of platforms and backgrounds, tend to reuse the same elements and patterns. There could have been room for experimentation with platforms featuring different surfaces, moving obstacles, or multiple types of collectable items. Accumulating points to unlock new characters will drive replayability, but it’s a double-edged sword for users who will never collect enough to see the characters. Ultimately, I’m left wanting more from Stagehand – wondering how its deceptively ingenious mechanic could have worked for all kinds of stages, characters, and missions.

But perhaps it’s Stagehand’s utter simplicity and rigorous approach that make it stand out. This is it. Stagehand is blessed by one pure, iconoclastic gameplay mechanic and your willingness to learn it, deconstruct it, and master it over time.

Stagehand is the opposite of Nintendo’s classic Mario games. But, in many ways, it also shares the same underlying principles. The control system is the game itself. The game becomes an extension of the player. From this standpoint, it’s only fitting that it was the iPhone’s multitouch that reversed the platform genre. Stagehand couldn’t exist anywhere else.

Stagehand is available on the App Store.