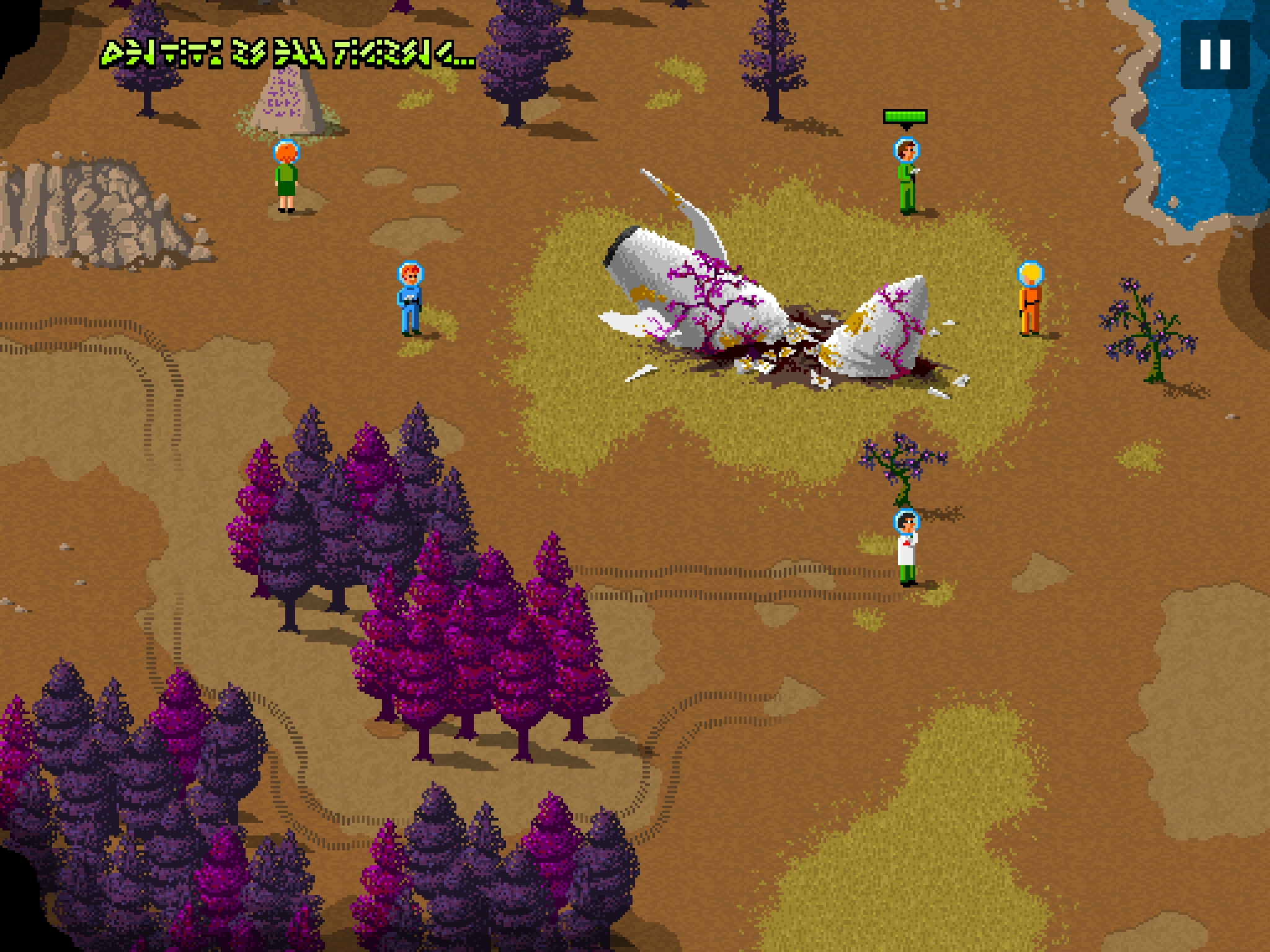 Space Age is an adventure game from Big Bucket, the indie dev studio by Matt Comi and Neven Mrgan, who previously brought us the exquisite (and addictive) The Incident in 2010.

Space Age – first teased over two years ago – joins Monument Valley in my list of best iOS games of 2014, and it is the kind of game that I believe anyone with an iOS device should play. Space Age looks great, sounds fantastic, and is filled with witty dialog that powers an intriguing story of space exploration and distant memories.

Note: I played and finished a pre-release version of Space Age on an iPad Air 2. I’ll try to avoid spoilers in this review as much as possible.

Space Age tells the story of Private, a young soldier who, in 1976, lands with his team on alien planet Kepler–16. The purpose of the mission is to investigate the planet and collect resources – primarily the planet’s native ore/energy source, called Nucleum – but it soon becomes clear that there’s more to Kepler–16 than strange metals and a resemblance to Earth’s landscapes (including water and apple trees). There’s life on Kepler–16, and Private – aided by a variety of teammates and especially science officer Archer – will end up discovering the secrets of the planet and his connection to other characters on Kepler–16. Without spoiling too much, there’s a bit of Avatar in Space Age, plenty of references to the American dream of space exploration, and a lot of funny lines. 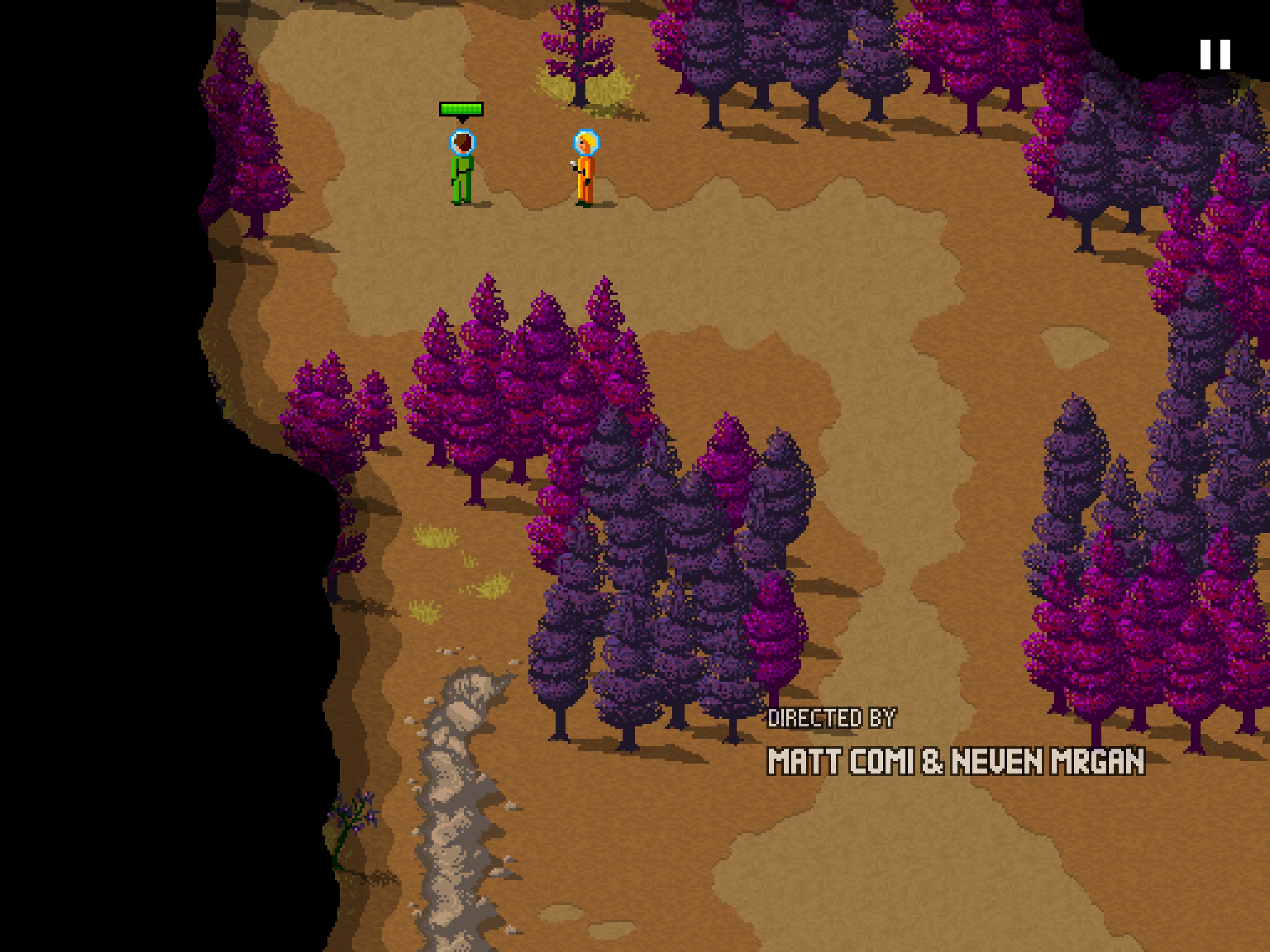 In pure Big Bucket style, what’s immediately noticeable about Space Age is its pixel art. Designed by Panic’s Neven Mrgan, Space Age features a delightfully retro pixel-driven aesthetic that’s reminiscent of classic NES games as well as modern takes on the retro-styled genre such as Fez or the upcoming Hyperlight Drifter. With Space Age, Mrgan and Comi had to switch from the two-dimensional panes of The Incident to a top-down perspective with free exploration, and the result is a perhaps less dense but equally impressive set of areas with a lot of personality. Space Age may not have the same variety of stages and color palette found in Fez, but it looks great and it has a distinctive look. Kepler–16 is consistent and recognizable, and that’s what ultimately matters.

Space Age is a tactical adventure game based on exploration and puzzle-solving. You control Private by tapping the area of the screen where you want him to go, and tapping is also used to inspect elements and items that may be relevant to move forward with the story. However, you often control multiple members of the space exploration team, and that is done by selecting characters with a two-finger pinch and tapping to move them to a specific point – sort of like an RTS. There’s an inventory in the bottom right corner of the screen that you can use to pick items – think about the underlying mechanics of classic point-and-click adventure games like The Secret of Monkey Island ported to iOS and with a top-down view, and you get the idea.

In early chapters, you’ll be asked to go from point A to point B or escort a teammate to the spaceship base, but as you advance in the story you’ll have to perform stealthy operations, kill enemies (also done by tapping them to shoot your gun), and solve more intricate puzzles that involve using items at specific locations, combining them, or figuring out which other characters can perform actions instead of Private. There’s a bit of everything in Space Age – the aforementioned Lucas Arts adventure games, but also health bars reminiscent of RTS games (which Space Age used to be in early prototypes), and stealth sections from Metal Gear Solid – and the result is fresh and never boring.

I want to highlight the tactical component of Space Age, as it’s been implemented tastefully and not excessively. In a few chapters and particularly towards the end, you need to control multiple characters and switch back and forth between Private and his team if you want to win. Whether it’s escorting others while avoiding enemies or collaborating on the same task, I found this tactical component to be lightweight but deep enough – perfect for an iOS experience and fitting with the rest of the game.

The difficulty of puzzles in Space Age varies through the game, with an obvious increase at the end and especially in the final chapter. I’m fairly well versed in adventure games with item-based puzzle-solving and I found the first puzzles to be relatively easy, but I got stuck in the later stages a few times, which required me to understand dialog, remember details, or switch characters. I believe that people who are not used to old-school adventure games could get stuck on puzzles and battles more frequently, but with enough attention and memory, I don’t think a walkthrough would ever be needed to beat the game.

The same isn’t true for the multiple layers of details and secrets scattered through the game. Graphical and musical peculiarities aside, there’s a whole level of story subtext that involves Private and his family in the game, which can only be understood by paying attention to the dialog and cutscenes. Or the alien alphabet – also reminiscent of Fez – which has an actual meaning and can be translated to English. And that’s not to mention the dozens of sarcastic lines and hints that, thanks to Mrgan’s brilliant writing (he also made text-focused game Blackbar), can be appreciated as foreshadowing for events in the game.

Like Monument Valley, you can see the final cutscene of the game (and amazing Propaganda song by Cabel Sasser) in an afternoon if you rush through the stages (Space Age took me about 5 hours to complete) . While that can’t be considered “long” in traditional console standards, the format lends itself to the iOS platform and the kind of player who’s looking for a concise but high-quality story and experience on the App Store. To complete the game (which involves medals and various secrets), you’ll have to come back to Space Age, which provides a good replay factor.

I also need to mention Cabel Sasser’s excellent original soundtrack, which is available on iTunes. Sasser wrote about his process for Space Age – essentially, he focused on melody and on following the story as it went, sort of like improv, but MIDI-style. It’s awesome.[1]

When I finished Space Age, I wanted more of it, but this is the kind of game that wants to tell a story and leave the untold parts to remain untold. Space Age is clearly a labor of love by Comi and Mrgan, and, after watching the last cutscene, I wanted to spend more time with the characters. That’s always a good sign, and I’m glad that Space Age’s seemingly trivial plot (aliens!) actually managed to make me think and care about the characters and its themes of nostalgia, curiosity, and responsibility.

Space Age is a must-play on iOS. It’s available now on the App Store.

Note: If you want to know more about the development of Space Age, we interviewed Big Bucket’s Matt Comi on Virtual.