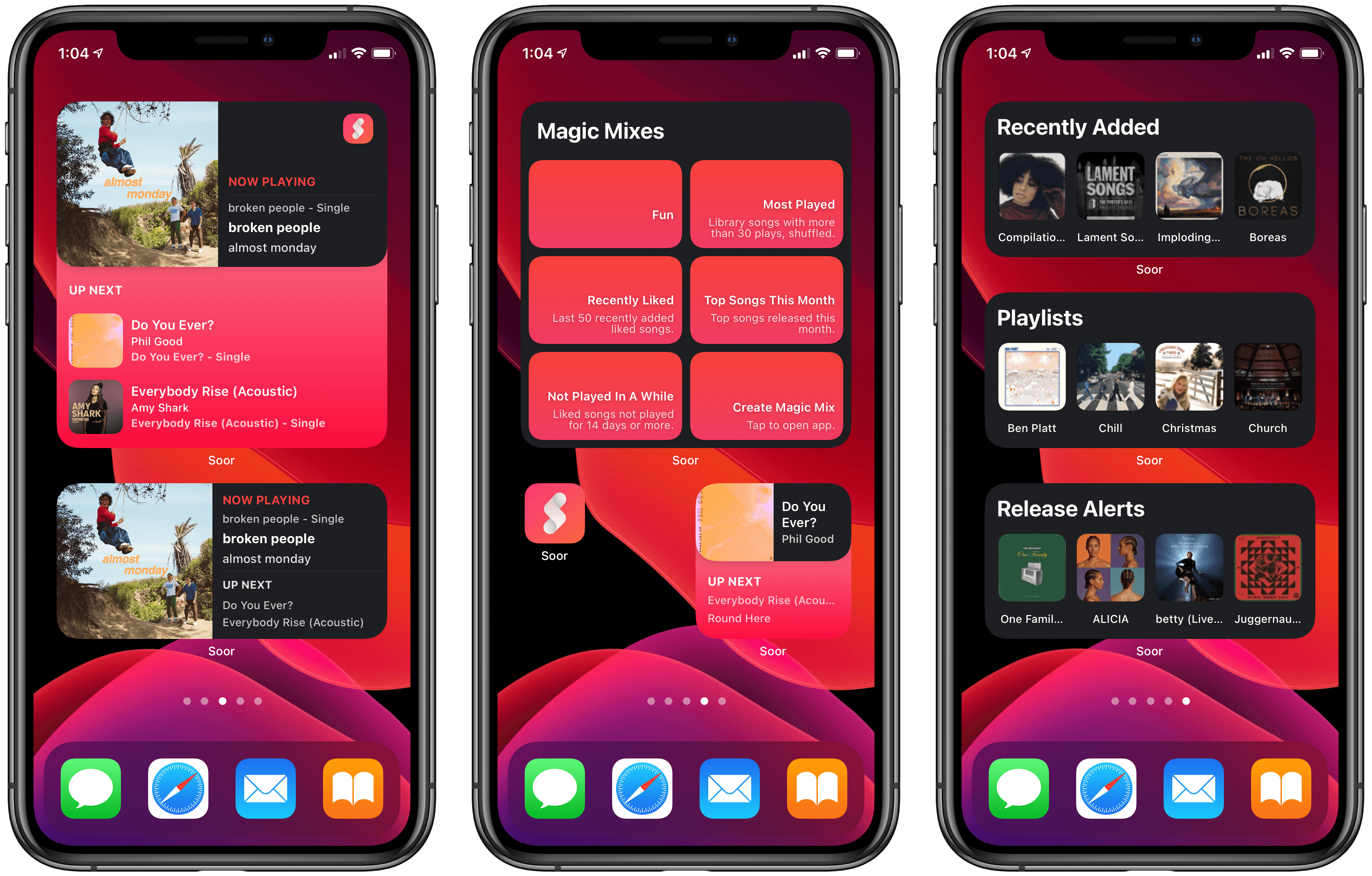 The formula is tried and true: Apple makes quality software that nonetheless leaves a lot of room for third-party developers to build something more powerful and better tailored for specific needs. In iOS 14, the built-in Music widget is a great example of this. I really like Music’s widget, which shows your recently played albums and playlists so you can quickly get some music going; it offers valuable utility. But if I’m frank, there’s a whole lot more that could have been done with widgets for Music.

That’s where Soor comes in. The third-party client for Apple Music that I recently covered offers not one, not two, but three different widgets to satisfy your music needs. And within those three widgets there’s a lot of customization to help account for a wide assortment of user preferences and desires. Every widget is powerful and also just as beautiful as what Apple’s team built, matching the full Soor app’s identity as a whole.

The Now Playing widget brings to iOS a feature the Mac has long offered: a simple way to find out which song is currently playing when you’re already using your device. Opening Control Center, or even the full Music app, works perfectly fine, but if you listen to music a lot, and especially if you listen to a lot of playlists, Soor’s Now Playing widget is a much nicer way to find out what you’re listening to. Sticking a small widget on your Home screen or in your Today view will not only display the name of the currently playing song, but also provide artwork and let you know what music is coming up next. The medium and large widgets are especially nice because text isn’t truncated as often and the visuals simply look great. Apple should really consider building something similar, it could be a perfect complement to its radio efforts.

Magic Mixes are another widget option, and here’s where the customization comes into play. Magic Mixes were a feature Soor added recently to build highly customized mixes, similar to the macOS Music app’s Smart Playlists functionality, but for the iPhone and even more powerful in many respects. Medium and large widgets will display four or six of your recent mixes respectively, for quick access to your favorite music.

A sampling of configuration options for creating Magic Mixes.

Many of these correspond to the different content sections you can add to the full app’s Home view, and are excellent candidates for widgets. I’m considering having several stacked Collection widgets offering quick access to my Recently Added, Top Playlists, and Release Alerts. Favorites is another interesting one, offering an assortment of algorithmically chosen songs based on likes and play count. I had expected it to instead offer a way to manually select certain albums and playlists to display, which perhaps will be added in the future.

My one complaint about Soor’s widgets is that currently tapping an album or playlist to launch it doesn’t take you directly into that selected music, but rather the app opens at the collection level and highlights the item you’d tapped, requiring an extra tap to then open and play the selection. Hopefully this behavior will change in the future, at the very least through a toggle in settings that can eliminate unnecessary taps.

Soor remains my favorite Apple Music alternative to the first-party Music client. The app’s streamlined UI and nostalgic Cover Flow feature, its powerful Magic Mixes, and its strong design chops made it compelling already, but now with widgets that offer significantly more utility than Apple’s app, there’s never been a better time to try Soor.

Soor is available on the App Store for iPhone.