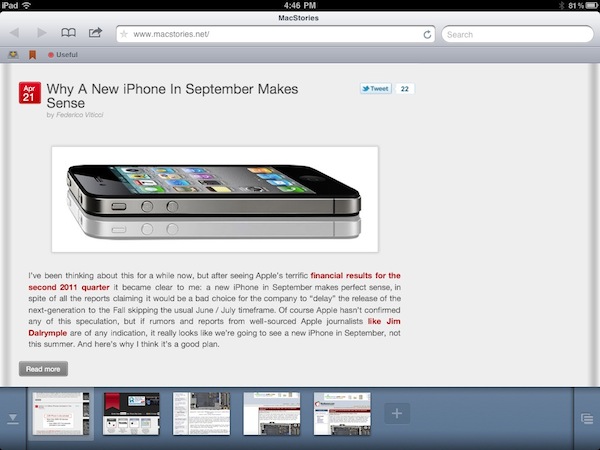 When I originally reviewed Sleipnir, an alternative browser for the iPhone, back in December, I was impressed by how the app managed to innovate in a market – the one of alternatives to Apple’s MobileSafari – that was saturated and full of apps that were just trying to offer the same set of functionalities over and over again – that is, tabs and Dropbox integration and, overall, some UI schemes that were aimed at porting the classic browsing desktop experience to the iPhone. Like Portal, Sleipnir was one of the very few apps that truly wanted to innovate on the platform. Rather than just copying the desktop and trying to squeeze a Mac-like experience into the iPhone’s screen, Sleipnir provided a series of features like touch-based tab management, tab groups and fullscreen mode that showed everyone how it was indeed possible to innovate with a mobile browser. And now Sleipnir wants to do the same on the iPad.

Released last night in the App Store, Sleipnir for iPad looks a lot like the iPhone version but it makes much greater use of multitouch gestures and tabs to offer a unique browsing experience like no other on the tablet. Instead of placing tabs as “panels” under the top app toolbar, Sleipnir for iPad follows the path traced by its iPhone counterpart and visualizes open pages as thumbnail previews at the bottom. The larger screen of the iPad allowed developers to further play around with this concept and implement a larger bar that shows more open websites at once. The refined cache management in version 1.2 also makes it possible to keep more pages open at once without losing your scrolling position and being forced to reload a page – although I’ve noticed after a dozens of tabs running in the background Sleipnir will refresh a page anyway. However, it works as well as Safari on the iPad 2, if not better: I rarely stumbled upon the page reload issue, and when I did Sleipnir refreshed the page in a way that my exact position was maintained. But there’s more: this new version introduces “TouchPaging”, a new feature that allows you to navigate between tabs with a horizontal swipe (think of the iOS 4.3 multitasking gestures, or the “back” animation in Lion’s Safari) and close a single tab by tracing a “L” on screen. I love these gestures, as they make browsing on the iPad so much natural it’s incredible to think Apple didn’t come out with a similar idea on Safari.

Just like on the iPhone, tabs can be organized in “groups” with drag&drop support, and you can close a tab with a vertical swipe on its preview. You can also drag a tab to the trash, and move as many tabs as you want inside a group. Again, the iPad’s bigger screen allows for a more convenient tab management that truly shines on Sleipnir for iPad. Last, bookmark sync: I still don’t like how Sleipnir handles the creation of bookmarks and the assignment of labels, but with a free Sleipnir Pass account the app lets you keep bookmarks in sync across the iPad and iPhone. The lack of bookmark importing features is annoying, but OTA sync across devices is just great.

Sleipnir is available for free on the App Store, and it’s one of the most innovative browsers ever released on iOS. Give it a try. 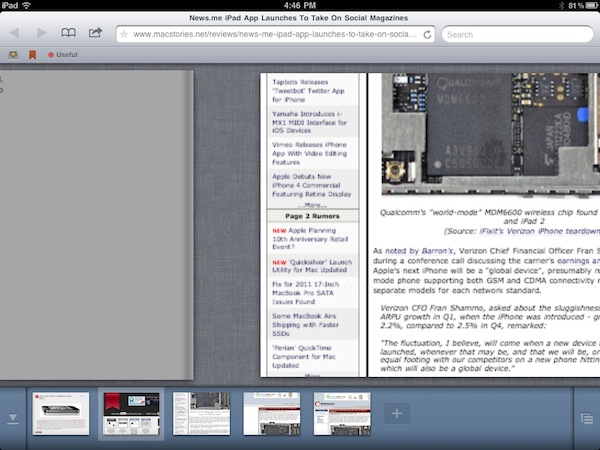 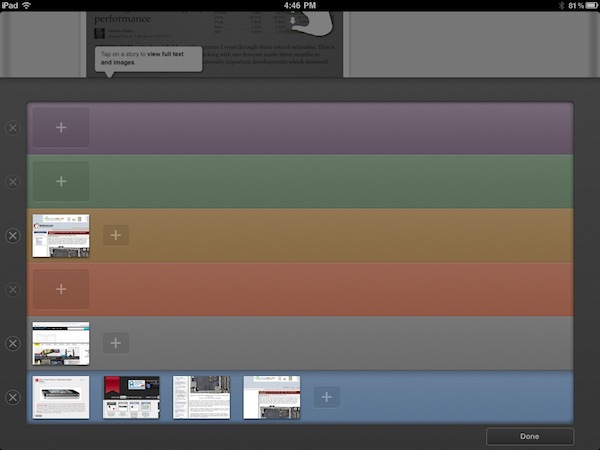