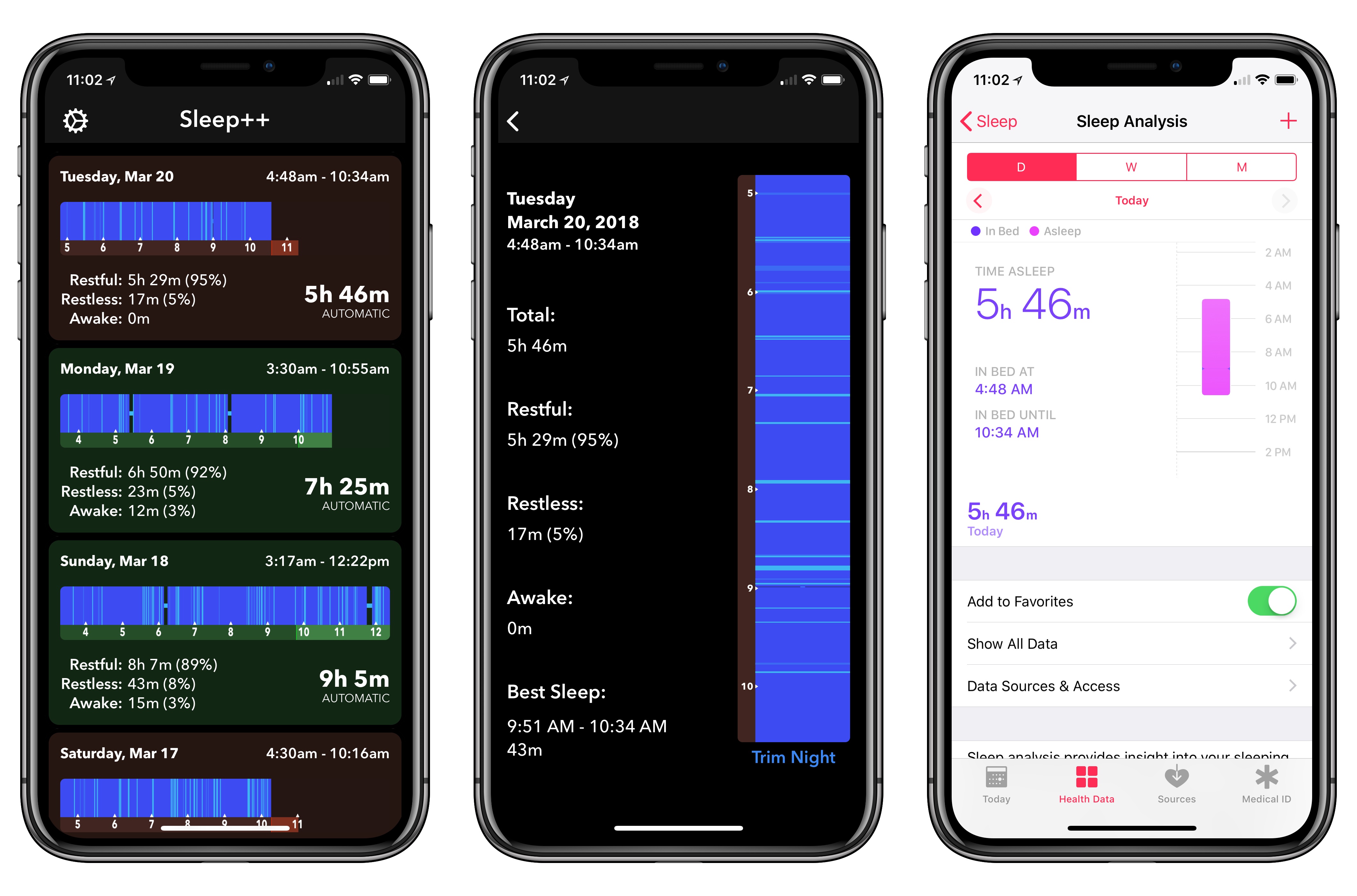 Sleep++, developed by _David Smith, was one of the first apps to experiment with the idea of using the Apple Watch as a sleep tracker. Using physical movement data collected by the Watch overnight, Sleep++ allowed you to keep track of time spent sleeping without having to buy a separate device (funnily enough, exactly what Apple itself acquired).

While I used Sleep++ for over a year and loved the app’s simplicity, its functionality was eclipsed by a newcomer – AutoSleep, developed by David Walsh. AutoSleep took sleep tracking via the Apple Watch to the next level: instead of forcing you to manually activate sleep mode in a Watch app before sleeping, AutoSleep figured everything out automatically. AutoSleep assumed that the Watch was continuously saving data in HealthKit anyway; instead of asking users to remember to track their sleep, AutoSleep “only” needed to monitor data saved in HealthKit and understand when the user was going to sleep and waking up a few hours later.

I switched to AutoSleep as soon as it came out in late 2016. The app has helped me get a better overview of my sleep for over a year: thanks to its HealthKit integration and input-free sleep detection, I’ve been able to build a historical log of my sleep times that has allowed me to change my habits and wake up earlier each day. As I noted in my original review of AutoSleep and coverage of subsequent updates, however, the app has always featured a complex UI full of controls, buttons, and sub-menus that made visualizing and adjusting sleep data harder than it should have been. AutoSleep’s core proposition is also its downside for many: it’s an app that throws a lot of numbers and graphs at you, with a learning curve and vast amount of information that can be overwhelming. If you’re serious about sleep tracking and the intersection of sleep and your heart rate, I highly recommend AutoSleep; if you want a sleep tracker that “just works” with minimal interaction, I would consider looking elsewhere.

This is where Sleep++ 3.0, available today on the App Store, comes in. Launching two years after version 2.0, Sleep++ 3.0 is a major update that brings automatic sleep detection through the Apple Watch. Like AutoSleep, all you need to do is install Sleep++ on your iPhone and give it permissions to access your Health data for automatic sleep tracking; as long as you wear your Apple Watch at night, Sleep++ will use its sensors’ data to build an estimate of your night’s sleep. There’s no need to install an app on the Watch or manually activate a sleep tracking mode: just wear the Watch at night and you’ll get a notification with a summary of your sleep within a few minutes of unlocking your iPhone in the morning.

What sets Sleep++ apart from AutoSleep is, of course, the drastic simplicity of Smith’s app compared to the rich data display of AutoSleep. Smith has kept Sleep++ extremely simple and intuitive: you can view individual nights as cards in the main page of the app, and tap on one to open a barebones screen with details about sleep times and quality. There are two levels of navigation in Sleep++ and nights are visualized as blue bars containing blocks of restful and restless sleep, as well as awake times. There are no historical trends, no heart rate data points, no weekly goals: Sleep++ is as basic as an automatic sleep tracker can be.

That’s not to say that Sleep++ is a simplistic take on sleep tracking. With its intuitive approach and basic visualization of essential data points, Smith’s app can be the ideal utility for those who are new to sleep tracking or perhaps don’t need the advanced reports of AutoSleep. There are thoughtful details in the app too: individual nights are subtly colored in red or green to indicate whether you’ve hit your desired nightly sleep goal or not; if you want, you can enable a bedtime notification that will gently remind you to get ready for bed. I haven’t enabled it because no app is going to tell me when I need to turn my Nintendo Switch off, but you get the idea. 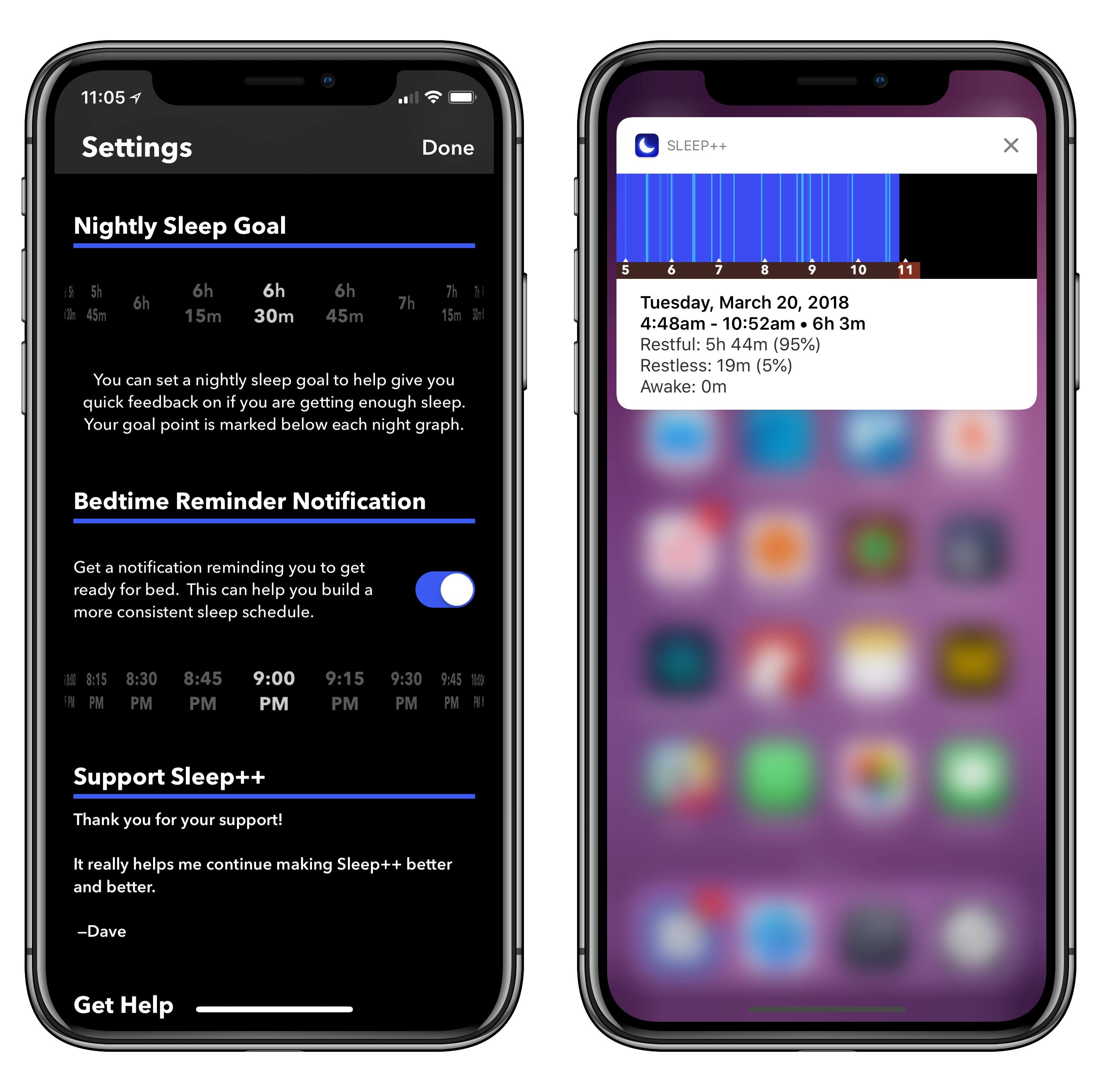 Behind the scenes, Sleep++ uses a combination of heart rate, active calories, and steps to analyze and categorize your night in restful and restless moments. In my tests over the past month, data captured by Sleep++ was just as accurate as numbers returned by AutoSleep. The algorithms used by Walsh and Smith are clearly similar, showing differences of a few minutes that are negligible from a big picture perspective. The biggest benefit of Sleep++ is that it doesn’t ask you to go through a multi-step onboarding process upon starting the app for the first time, nor does it require you to learn what different colors or icons mean; for better or worse, it just works, almost magically, and it’s free to download with an In-App Purchase to remove ads. 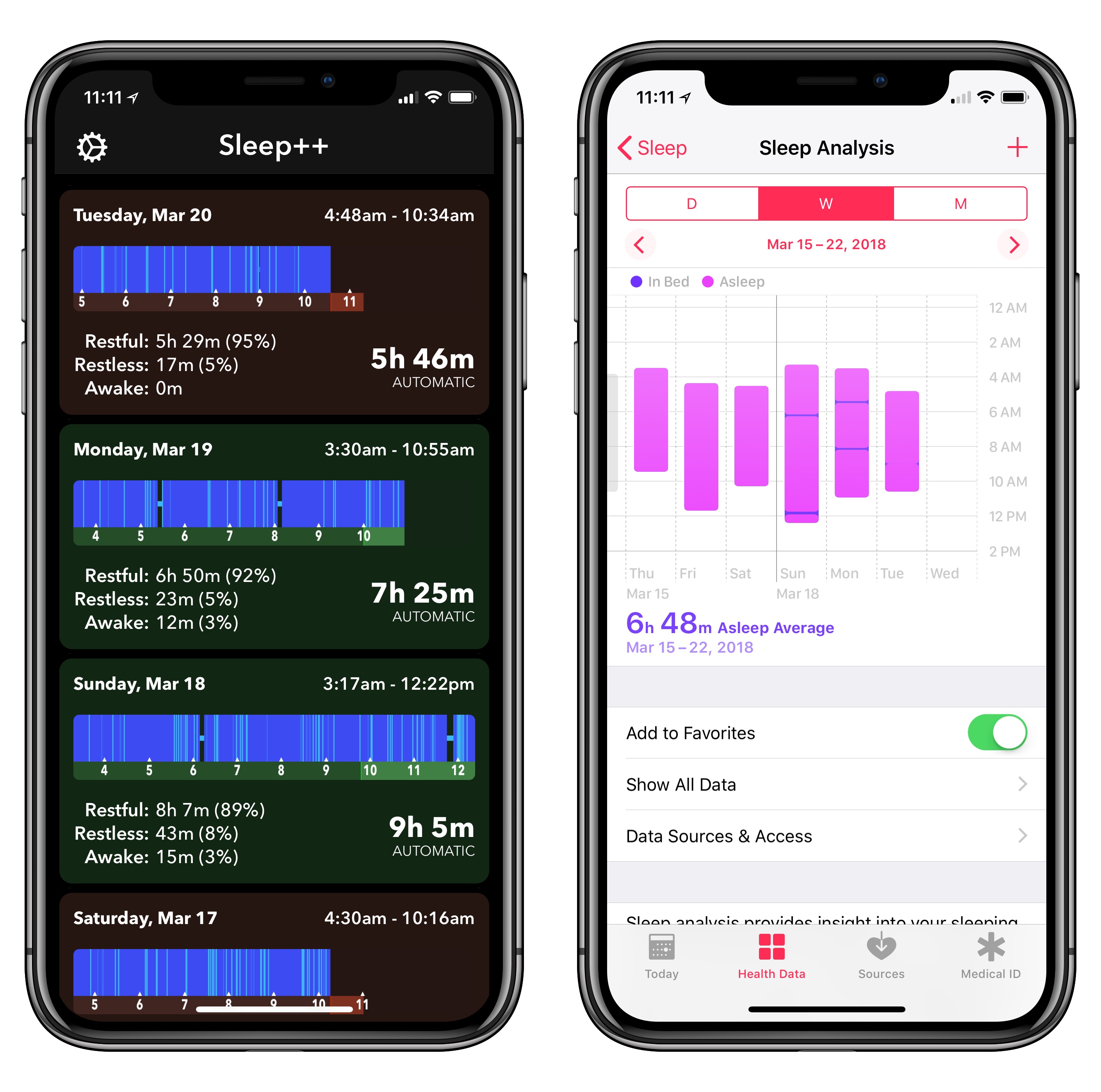 Sleep data captured by the app is saved in HealthKit.

Ultimately, it’s difficult, if not downright impossible, to recommend just one automatic sleep tracker for Apple Watch. Sleep++ lowers the barrier to entry considerably, both from a pricing and usability perspective; AutoSleep can be more useful in the long term if you commit to the app and want to understand as much as possible about your sleep patterns. Until Apple enters this space with their own automatic sleep tracking feature for watchOS, we have two fantastic options on the platform that solve the problem from two different angles.

Personally, despite its perplexing UI, I’m sticking with AutoSleep because I appreciate its data-heavy approach that lets me visualize goals, heart rate, and trends alongside my sleep data. However, thanks to its simple approach, no-frills interface, and rock-solid performance, Sleep++ 3.0 is my new recommendation for anyone who wants to get started with sleep tracking via the Apple Watch or doesn’t need the advanced features of AutoSleep.

Sleep++ 3.0 is available on the App Store as a free update for existing users. The app is free to download with a $1.99 In-App Purchase to remove ads.