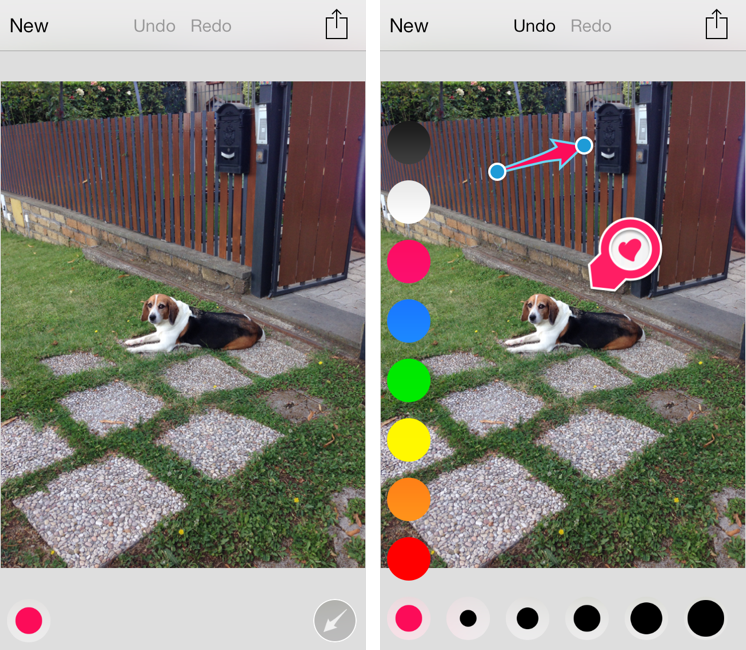 Released today during the third annual Evernote Conference, Skitch 3 is a complete redesign of the app that Evernote acquired in 2011 and started integrating into the main desktop and iOS apps. Skitch 3 has been redesigned and rebuilt for iOS 7, stripped away of the direct integration with an Evernote notebook, rebranded, and relaunched as a visual note-taking app focused on quick and fast markup. I have been testing Skitch 3 for the past few weeks, and, after an initial shock, I think it’s an excellent change.

When Evernote acquired Skitch and started putting Evernote-focused features such as obligatory Evernote accounts and notebooks into it, the Skitch userbase wasn’t happy. Evernote listened, and quickly iterated on the product – originally, a Mac app – to re-add features that had been removed while still increasing the integration of the product with Evernote. After they shipped a Universal iOS app, it was clear that Evernote was seeing Skitch as a complement to the main Evernote experience: screenshots taken with Skitch would sync to a read-only Evernote notebook, making Evernote, effectively, a storage unit for Skitch users.

During the past few months, however, Evernote has brought several inter-app communication features the Evernote and Skitch apps: by allowing users to select an image or PDF in Evernote, send it to Skitch for markup, and send it back again as an annotated version to Evernote, the company put the focus on Evernote as the central location for all your files, with Skitch being a feature of the ecosystem. With that in mind, it was no surprise that Evernote for iOS 7, released last week, shipped with image and document annotation tools built-in, completely eschewing the need for Skitch.

Therefore, Evernote thought that it was time to get back to the basics of Skitch, and iOS 7 provided a solid opportunity for that. Skitch 3 is solely aimed at making it fast to take a photo and annotate it, or to grab an image from your Camera Roll, edit it, and share it. This willingness to make Skitch faster extends to the camera view itself, which has been revamped with iOS 7 to offer a live, adjustable arrow that overlays the picture you’re about to take.

In order to ensure that Skitch can be a light, fast annotation tool, Evernote sync has been removed. This is quite a pivot for the company that bought Skitch and started adding Evernote sync features to it, but it makes sense in the process of wanting Skitch to be a standalone product focused on speed and efficiency. Skitch 2 was one of my most-used utilities on a daily basis, both on the Mac and iOS, and I hated having to wait for sync to finish every time I wanted to quit the app, or receiving errors and poor performance because the app couldn’t sync properly on 3G. You can still send an annotated image to your Evernote account with Skitch 3, but that’s now a manual option that resides in the new sharing menu; you don’t have to log into your Evernote account if you don’t want to, and you can use the full-feature set of Skitch without Evernote.

In a move that plays well with iOS 7’s focus on content, once the – and excuse me for the obvious pun here – elephant in the room is out, Skitch can be what it was always meant to be: a quick annotation tool for photos. You can shoot photos, choose them from the iOS library, annotate them, and share them. There is no added complexity and, again, I think it’s great to see Skitch going back to its roots with a modern design language and feature set. 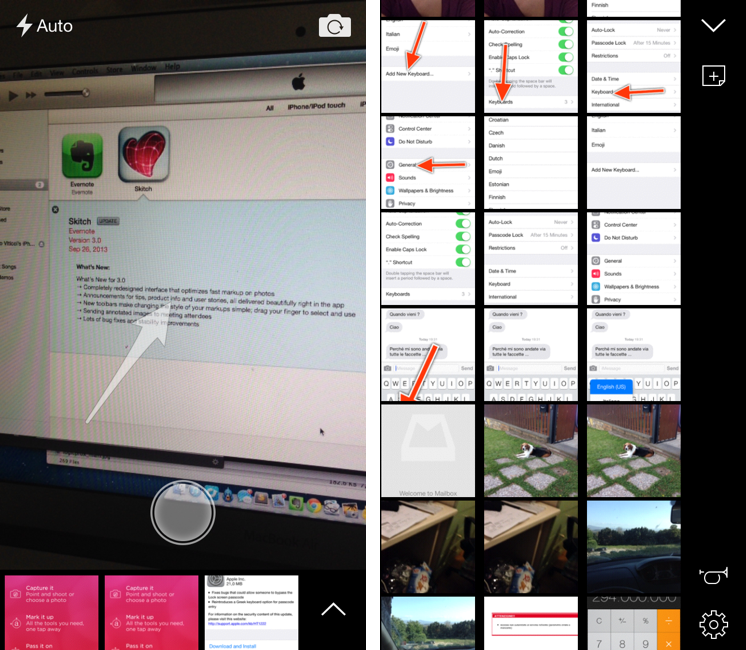 The app launches with a camera view called Quick Shot. The peculiarity of Quick Shot is that it displays a translucent arrow overlay: when you tap to focus, the arrow is also pointed to the part of the picture you’re focusing on. This happens live on the iOS 7 camera, and it’s a simple but genius implementation. Once the photo is taken, the arrow overlay turns into the typical pink arrow that you can drag around and modify in an editing screen. Adjust the arrow, tap the sharing button in the upper right corner, share or save the annotated picture, and you’re done. This is the basic flow of the new Skitch, and you can go from no picture to annotated & shared in less than 15 seconds. It’s good, but there’s more.

Skitch 3 is decidely an iOS 7 app. Textures have been taken away, buttons are traslucent, toolbars blur content underneath, animations and physics effects are playful and, overall, nice. The Skitch brand has been redesigned to be an arrow with feathers, because, as Evernote explains, “from the beginning, Skitch has made it easy to quickly communicate your ideas and guide projects to their target”. Skitch is now all about getting images in and out as fast as possible, and every aspect of the new app reflects that. There is no way to browse all previously annotated Skitch images; there are no timestamps, file names, or search fields; in the Camera Roll view, you just see a list of all your photos. The app feels fast, easy to use, and fresh in a way that the old Skitch never did.

The best part, in my opinion, is that, in spite of the conceptual and stylistic simplification, Skitch 3 is still a powerful app with great annotation tools. You can add arrows, stamps, selections, shapes, and text to your images, dragging them around to change their position and size and picking different colors.

The editing screen is drastically different and simpler, with tools and colors available in two separate circles at the bottom of the screen; tap a circle, and it expands with a bouncy animation to reveal tools in tiny translucent circular overlays. It’s a fun and elegant design that has been made possible by iOS 7 but that hasn’t lost its efficiency. Skitch 3 still provides more advanced tools than Marco Arment’s Bugshot and, with this new version, it makes the app just as fast and intuitive. 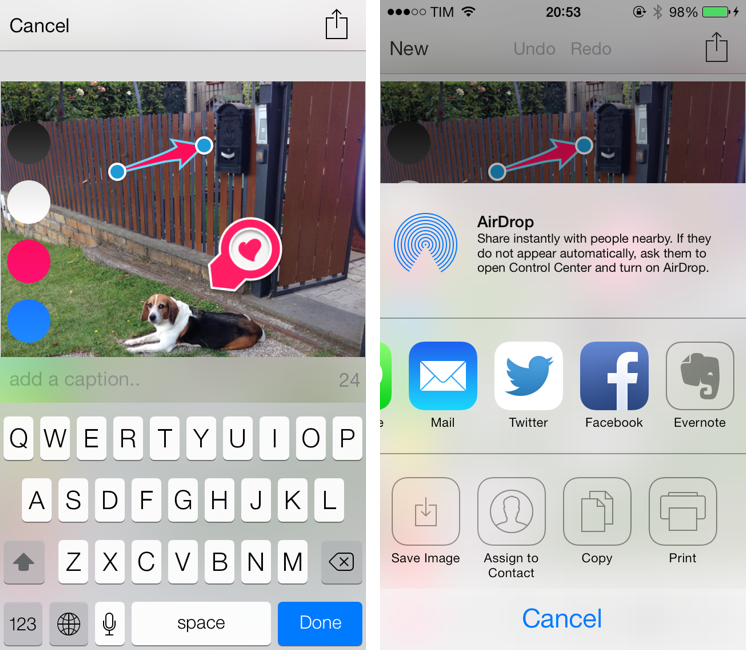 The sharing menu contains Apple’s built-in sharing options, plus an Evernote button to save an annotated photo into your Evernote account; if you do, the photo will be saved as a note in your default notebook with the “From Skitch” title. Evernote also mentions a feature to share images with attendees from a meeting recognized in the iOS Calendar, but I’ve never been able to get the feature to work as the only meetings I attend are the ones with my dog (pictured in this post) and she doesn’t have an iPhone (yet, we’re thinking of the 5s though).

There are some things I wish Skitch 3 did better. In the editing screen, the app can get slower with editing large, full-res photos when you start adding several annotations to them, and the Undo/Redo buttons at the top could provide better feedback when tapped. The new “Share with Caption” option, which you can see demonstrated here, could use a cleaner view that doesn’t have the big Skitch logo at the bottom. In the Sharing menu, I would like to see “Open In” options to send images to other apps, as, right now, I have to save an image to the Camera Roll first, then open, say, Droplr and pick it manually.

After two years, Evernote has reshaped Skitch into what it used to be: a fun, quick annotation app with a lot of tools but a focus on speed and straightforwardness. The previous Skitch > Evernote notebook solution was slow, clunky, perhaps useful for some users, but not efficient nor rapid. The new Skitch has lost some options and features, but not the ones that truly matter: the new Quick Shot screen is fast and convenient, and the editing screen is cleaner thanks to a larger canvas that makes it easier to see your image and the shapes or text you’re adding to it.

I’m happy with Evernote’s new direction for Skitch and I think they did a great job with the iOS app. I’m curious to see how this will translate to the desktop client, but, in the meantime, I can start using Skitch for iOS as my go-to annotation app again.

Skitch 3 is available for free on the App Store.