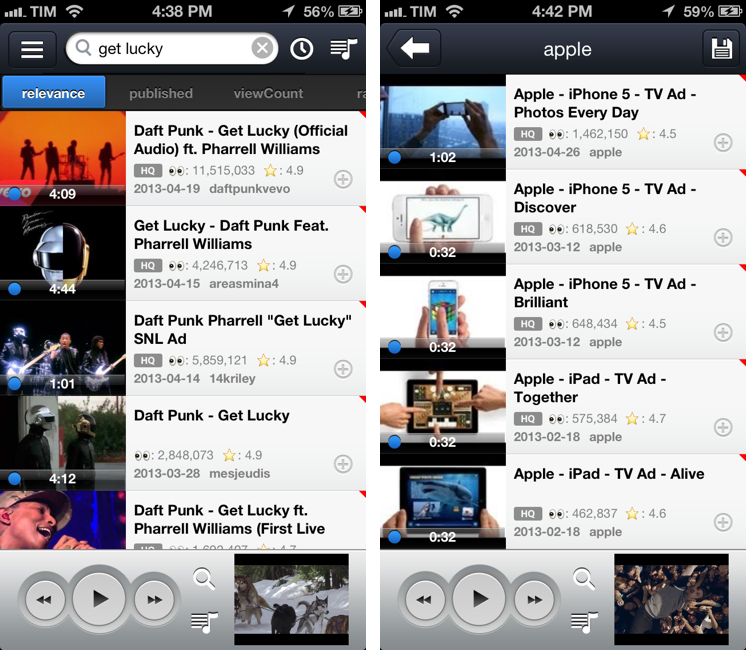 After Cody linked to FoxTube for Mac two days ago, I figured I haven’t mentioned why, after nearly a year and a major update, I’m still using FoxTube for iOS alongside the official YouTube app.

FoxTube isn’t the best looking app ever made for iOS; while the 2.0 version improved the overall design, there’s still a lot going on in terms of interface and everything feels a bit cramped, especially on the iPhone. The icon is a literal representation of the app’s name; sometimes, icons in toolbars overlap with navigation buttons. I wish the FoxTube developer could find a way to slim down the interface and make some parts more cohesive, but I understand how that can be difficult when FoxTube does so many things.

FoxTube is a supercharged YouTube client for iOS. I know what you’re thinking: you don’t need another YouTube app after the release of the (free) official client. And that is probably true – as MacStories readers know, I’m a big fan of the new YouTube app (App Store users seem to agree, too). FoxTube, however, is a great complement to the YouTube app that I recommend if you’re looking for more flexibility and customization in certain aspects of the YouTube experience.

First and foremost, FoxTube has an inline mini player. This means that you can start playing a video, go back to search results or a playlist, and the video will keep playing, live, in a thumbnail at the bottom. You can tap on the mini player to reopen the full player, and you can tap & hold it – just like any other result in FoxTube – to bring up the app’s excellent contextual menu. This menu, which I’m extremely fond of, contains options to share, add to favorites, open the mobile video page, see related videos, and go to an uploader’s video page. These actions would require multiple taps and switching between views in Google’s YouTube app. 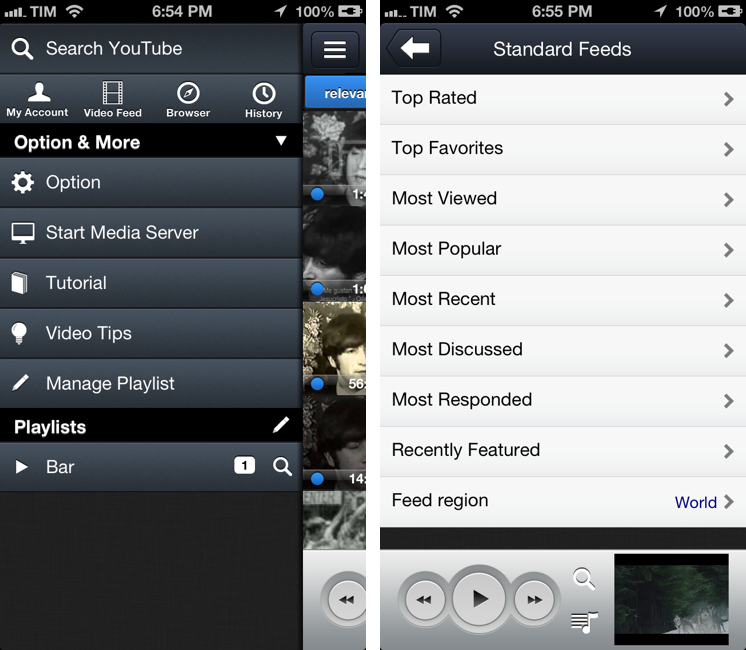 FoxTube’s mini player is one of the best approaches to YouTube search I’ve ever tried. It uses precious vertical space on screen, but the issue is mitigated by the iPhone 5’s taller screen. Alongside serving as a bridge between “now playing” content and navigation, the mini player contains buttons to play/pause and jump between tracks, return to search from anywhere, and open a video’s playlist page. There are some useful options to configure in the Settings as well: you can choose to start playing videos directly in the mini player (the full-screen player won’t launch automatically, so you won’t lose your context), and you can place the mini player on the right side of the screen when in landscape. I activated both options.

The reason why FoxTube is popular among third-party YouTube apps is that it supports offline caching of videos. I have no idea how FoxTube managed to keep this functionality considering Google’s disaffection with offline usage, and I probably shouldn’t mention it on the site – but still, the app can save videos for offline viewing. And not just that – it lets you save MP4 source files to the Camera Roll, send them to other apps through Open In (available in the tap & hold menu), and even view them from a Mac on the same local network using FoxTube for iOS as a media server.[1]

FoxTube comes with a setting for default video quality (360p, 720p, 1080p), which also applies to the videos you’ll cache offline. Videos can be cached in the background[2], and there are options to control caching on WiFi, 3G, and remove unused or all caches.

FoxTube’s other power-user feature is the player itself. Basically, the full-screen player contains every playback-related option you can think of, and it’s customizable with multi-touch gestures. 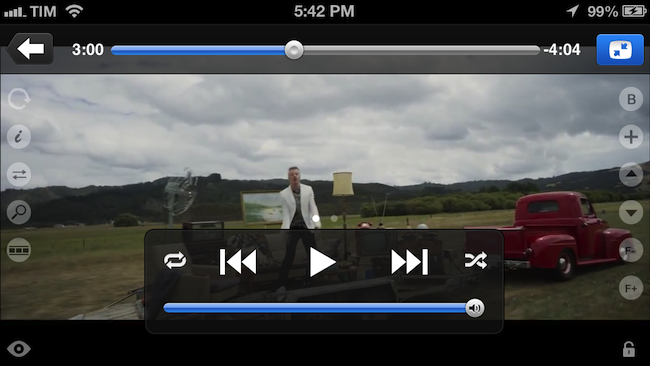 By default, the standard iOS playback controls are augmented by two vertical rows of translucent buttons to do things like skip frames, mirror a video, pinch in to zoom anywhere, lock orientation, jump to sections (in 15-second increments), and, my favorite, add bookmarks. Similarly to how Instacast lets you bookmark specific points of a podcast, FoxTube can save bookmarks for any point in a video and let you skip to them. In this way, I can take a video with a long intro like, say, Macklemore’s “Can’t Hold Us”, and add a bookmark for when the actual song starts. Combine that with FoxTube’s capability of playing videos in the background as audio (with native iOS controls in the multitasking tray, for the pleasure of Google’s partners), and you get a customizable video player with rich controls that are typically found in more advanced music apps.

In the Settings, you can tweak the functionality of gestures that you can perform on the player, choosing from a wide range of Seek, Controls, Speed, Brightness, Volume, and Menu commands. This screen is a bit overwhelming with its quantity of options enabled by default. Personally, I rely on just two: a vertical swipe on the left side to increase/decrease brightness, and the same gesture on the right to control volume. These two gestures are so obvious once you “get” them, I wish Apple enabled them as an official API in iOS.

There are other minor options in FoxTube that I’ve come to appreciate over time. There is a sleep timer, so you can leave your iPhone playing a long playlist and the app will stop playback after a certain amount of minutes; you can save an uploader’s entire feed as a local playlist; and, you can choose a “search location” to load YouTube content (and thus the service’s feeds, also supported in FoxTube) with settings for a specific country (I prefer “worldwide”).

There are also two things I don’t like about FoxTube: sorting options and integration with YouTube playlists. The latter is confusing: FoxTube can let you access online playlists (and watch later) for your YouTube account, but it defaults to creating local playlists for every search and I can’t find a way to send a video to an online playlist. Fortunately, the creation of new playlists from searches can be disabled from the Settings, and, curiously enough, sending videos to your online Favorites is supported. If the developer every decides to improve upon this aspect, I’d also like a way to add shortcuts to YouTube playlists in the app’s sidebar. As for the sorting options, the YouTube app still beats FoxTube with granular settings that I find more versatile than FoxTube’s tabs (pictured above). 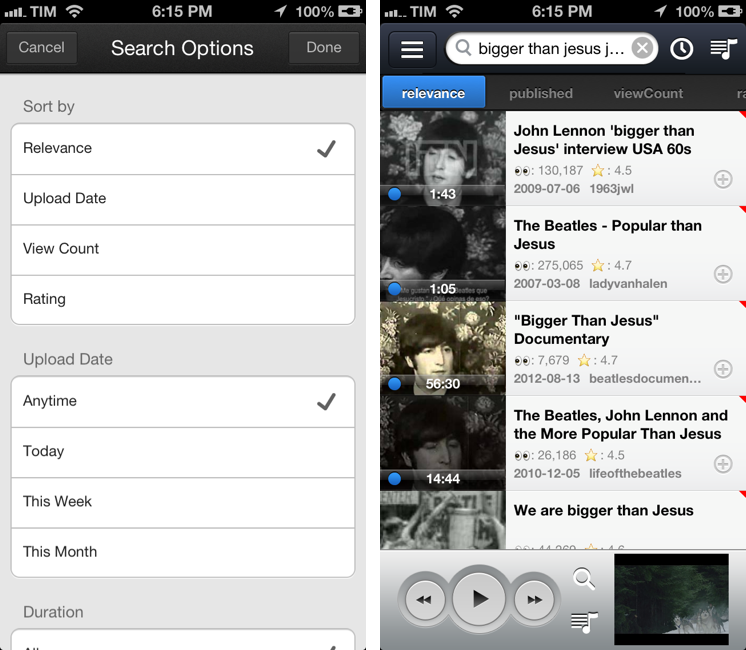 For me, FoxTube is a powerful addition to the official YouTube app. With offline caching, the mini player, control on video quality, and a handy tap & hold menu to simplify sharing and navigation, FoxTube makes browsing YouTube and playing videos a considerably faster experience. I use FoxTube on a daily basis on my iPhone, where you can download the app at only $2.99. An iPad version is sold separately at $4.99.