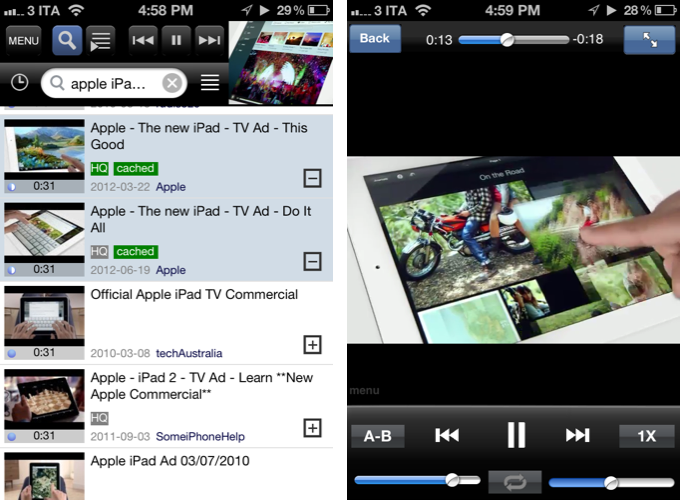 I don’t typically discover new apps thanks to word of mouth or by checking out my friends’ Home screeens, and yet I have my friend Andrea to thank for letting me know about FoxTube.

I’m not the biggest fan of the native YouTube app for iOS. In fact, I think it’s actually one of the worst experiences offered to iPhone and iPad users: several YouTube videos aren’t “available on mobile”, search is too simplistic, you can’t copy direct URLs for videos to share them elsewhere, and, generally speaking, it has remained unchanged for the most part since its original launch. Anyone who spends a decent amount of time on YouTube knows that the iPhone app is just a surrogate of the desktop service. I can’t tell you how many times I’ve heard my friends saying “You can’t watch that on YouTube for the iPhone” (quite possibly as many times as “I’m using Facebook through Safari because the app won’t load”).

FoxTube doesn’t look pretty and its icon doesn’t look good, but it is by far the best way to access YouTube I have found on iOS. Firstly, it loads any kind of video – even the ones that the YouTube app won’t open. Especially music videos from “VEVO” channels – FoxTube can display those just fine. And whilst the YouTube mobile website can open them as well, FoxTube has settings to choose between 360, 720p, and 1080p video quality. And it loads fast, unlike the mobile website.

Secondly, FoxTube comes with a plethora of other options including caching, background video player, and background audio. By default, the app caches any video you start playing while it’s also buffering, but there are some settings to adjust its behavior. Videos can be dismissed (with a button or gestures, which the app supports for many other controls) and left playing in a “mini player” at the top that runs while you’re browsing something else in the app. Search is “real” search, with suggested results, history, and sorting options. You can share a video (and also copy its URL), and easily jump to an uploader’s video page, the web video page, or the Related Videos page.

And there’s more: a popup menu on the custom video player lets you toggle mirror mode, pinch to zoom, frame-by-frame navigation, and it even enables you to create bookmarks. If you want to use the app as a music player, FoxTube does background audio (with its icon appearing in the multitasking tray).

Like I said, FoxTube doesn’t look particularly nice, and I don’t like the fact that the iPad version is a separate $4.99 purchase. Yet FoxTube is highly functional, and it brings many of the functionalities I’ve always wanted from the native YouTube app (which is not getting any better).

FoxTube is my new YouTube app on iOS, and I recommend it to anyone who’s been frustrated with the stock app. $2.99 on the App Store.