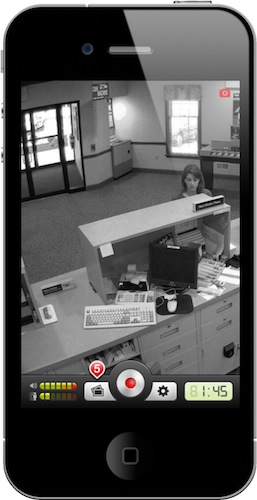 Now this is an interesting app I’ve recently discovered in the App Store. Months ago, I began thinking about setting up a homemade wireless security system in my house; I saw that the system could be easily put in place with a couple of hundred dollars, and I was getting serious about purchasing all I needed to get it up and running. As usual with my personal projects I dream about and save in my “someday” list, it didn’t happen. Work got in the way, priorities changed, I didn’t set up a home security system. As my to-do list suggests, I may actually do it “someday”.

Home security and monitoring, anyway, is a personal requirement (and hobby, I guess, or obsession) that can change according to one’s needs, workplace and items to protect from unwanted eyes and hands. This is why I think Security Cam, a $0.99 app for iPhone, may be just what the average user is looking for. 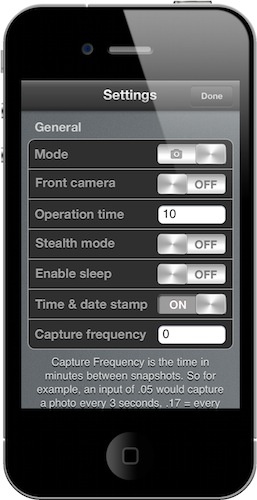 Typical scenario: you go to sleep or take a nap and you fear someone may use your computer, your videogame console or just mess with your iPad. I’m not saying it’s wrong to let others use your gadgets (ask my friends about the iPad I gave them every day), but perhaps you just want them to ask for permission first. It’s cool, I’ve been taught to ask for permission before using anything that’s not mine, too. So you want to see who’s the college dude who keeps using your stuff, but you don’t have the resources to set up a true security system with multiple cameras connected wirelessly to, say, your computer or a remote server. Plus, that might be a litte too overkill as well. An app like Security Cam comes in handy in situations where you want an easy-to-use, effortless way to monitor what’s going on around you with just your iPhone, and have the results visually accessible later in the form of actual photographs and videos.

Security Cam has a nice user interface design that’s similar to the standard iPhone camera app, although it displays more information on screen. For instance, it’s got a timestamp, buttons for settings and in-app camera roll and motion / audio detection visualizers. Security Cam works like this: once you set it up to capture images or videos from either the rear or front facing camera, the app can optionally capture stills only when motion or audio are detected. You can adjust the sensibility of motion detection in the settings, and it works fairly well.

Security Cam, of course, doesn’t play any sound when it’s working to ensure that your “victim” won’t know that a camera has been planted. And to further increase the “sneaky” factor of the app, the developers implemented a “stealth mode” that turns the screen off while the app is recording so that even if someone spots the iPhone (which I assume should be hidden and positioned somewhere), he wouldn’t think the camera’s on. To unlock the screen, you’ll have to tap on the upper left corner. Last, you can set an operation time (tell the app to record for 20 minutes only, for example) and a capture frequency. The latter option makes for a good way to turn the app into a time-lapse photography tool as well, although I haven’t tested it in that way.

Overall, Security Cam works very well as a mobile app that can record video and capture photos with audio and motion triggers. It’s got battery conservation features and the stealth mode is very, very neat. Security Cam is not a professional security system, but for .99 cents it might just be what you need to keep an eye on your stuff.