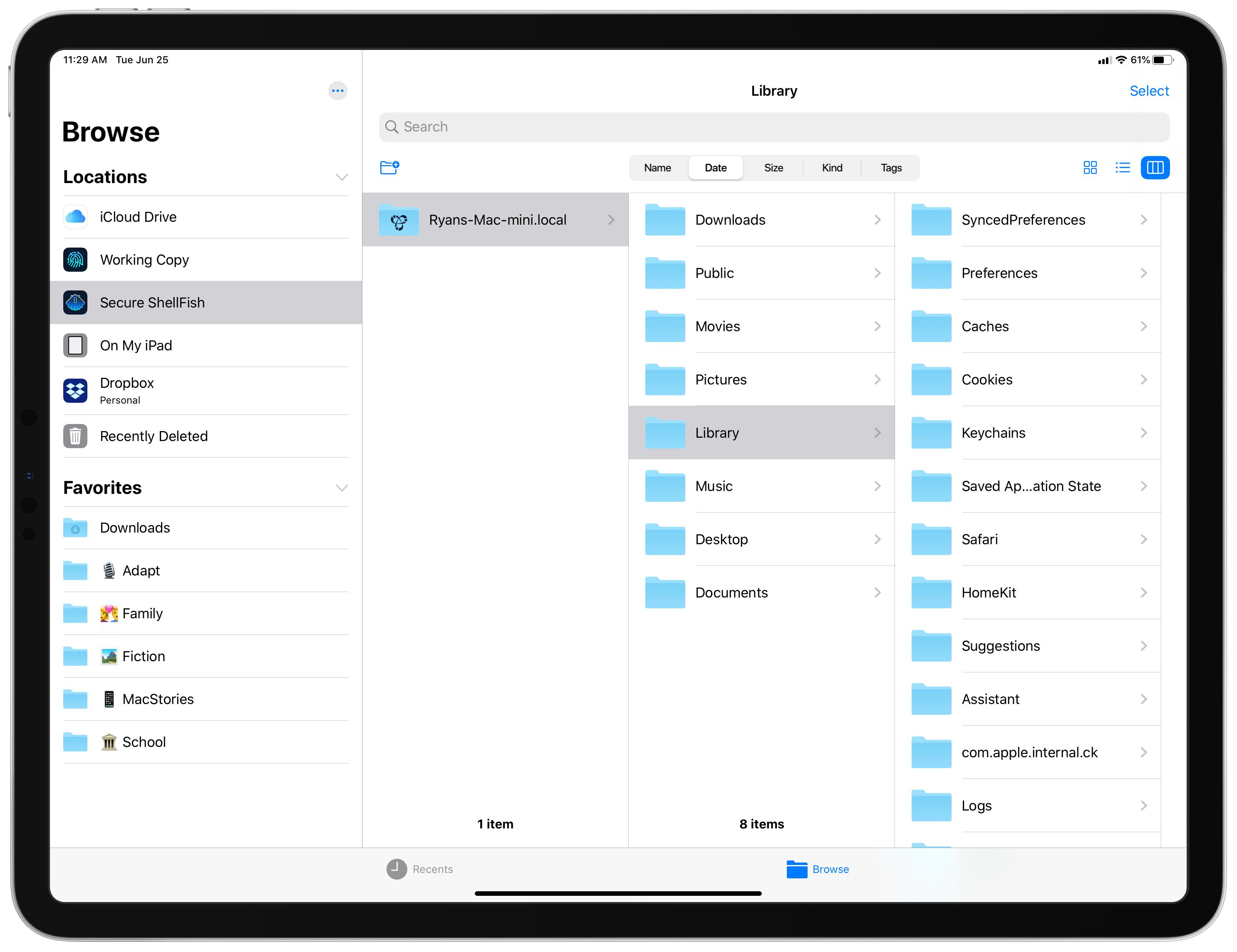 All my cards on the table: until I tried Anders Borum’s new app, Secure ShellFish, I had no idea what an SSH or SFTP server even was. I’ve never had the need for a file server, and have thus considered it one of those technical computing concepts that’s over my head and exists only for a certain type of user. My guess is that many other people feel the same way, not just because of the concept of servers itself, but also because the tools available for configuring and accessing servers can tend to be overly complex. Secure ShellFish, on both iPad and iPhone, aims to be the opposite: it makes configuring servers easy, and accessing them even easier because it’s built around integration with Apple’s Files app.

The core Secure ShellFish app is really just a tool for configuring servers that are then accessed inside of Apple’s Files app. The experience of setting up servers is simple: just plug in the appropriate address, port, username, and password as needed, and you’ll be all set up. You can optionally select a specific directory if that’s all you need accessible, and also adjust server settings per your preferences. After the initial server setup is complete, you won’t see a server’s documents inside Secure ShellFish, instead they’ll live inside Files.

The Files app is at the core of document management on iOS; it’s to the iPhone and iPad what Finder is to the Mac. And while the first version of Files in iOS 11 had its share of shortcomings, Apple has made significant investments in the app for iOS 13 that guarantee its importance to the platform moving forward. Files will soon support external storage devices like USB drives, native zipping and unzipping, offline document storage, and even SMB file server support. For all that Files will soon offer, however, it won’t support SSH and SFTP servers. That is, until you install Secure ShellFish. 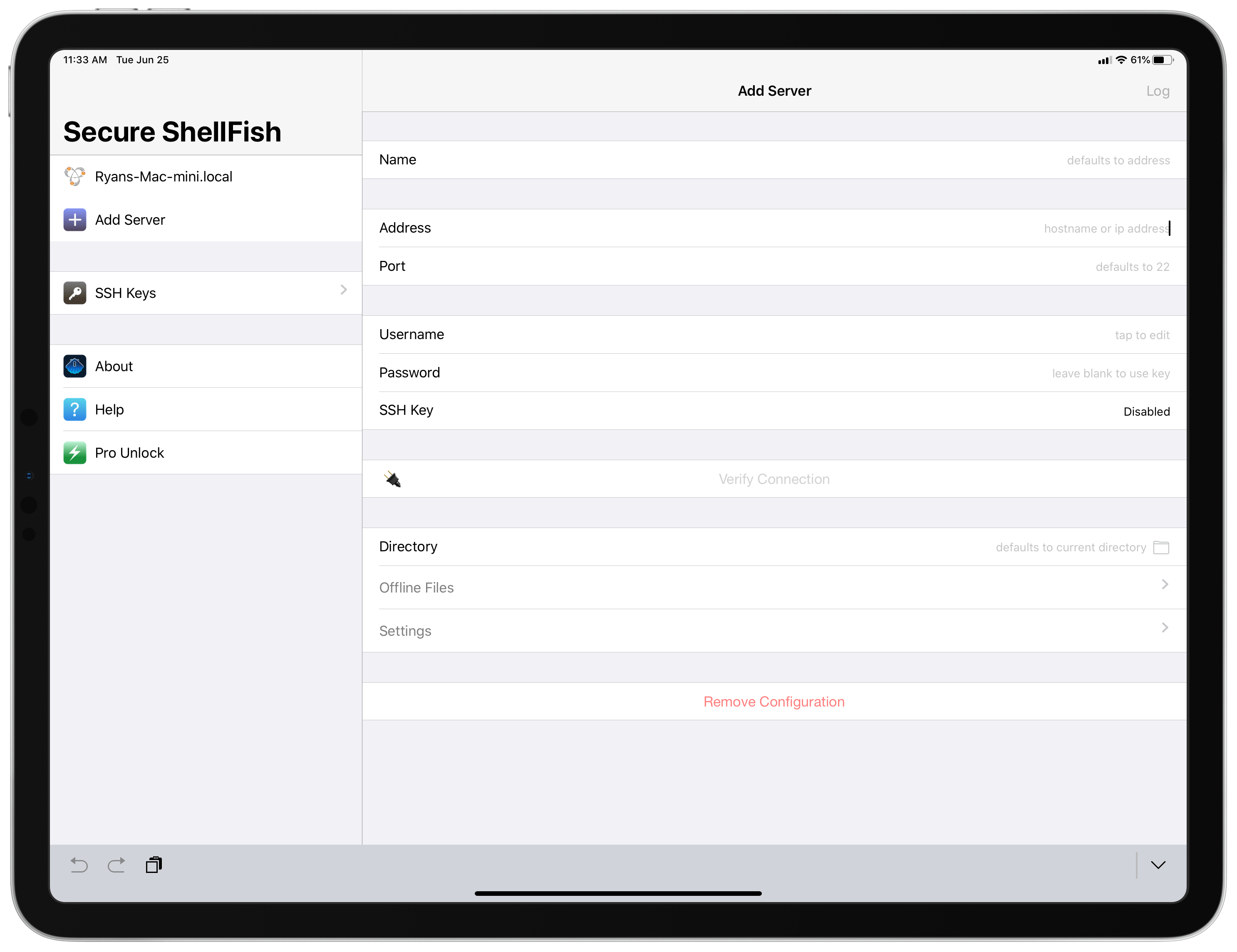 Secure ShellFish acts as a file provider in the Files app, meaning it can be configured as one of Files’ Location options. This enables access to the entire file structure of your compatible server, and comes with all the perks of integration with Files: drag and drop support, easy document transfers from one file provider to another, a strong set of keyboard shortcuts, tagging options, and availability inside any app powered by the document browser.

While I don’t know the first thing about running a server, I do own a Mac mini, which thanks to macOS can be configured via SSH for access from another device. By clicking a couple checkboxes inside System Preferences ⇾ Sharing, my Mac mini’s entire file system was made available to add to Secure ShellFish. Once the Mac was configured, which took just a couple of minutes, I was able to use Files to access not only the documents I have saved in iCloud Drive, Dropbox, and the other file providers I rely on, but also every file stored on my Mac – all from the same Files interface.

When using the Files app, I can copy, duplicate, move, delete, tag, rename, or view any file from my Mac thanks to Secure ShellFish’s file provider. I can create new folders on my Mac, download files on demand, and even move documents from the Mac into a different file provider such as iCloud Drive, or vice versa. All this needs to be done while on the same local network as my Mac, but if I needed remote access, using a dynamic DNS service would enable that.

Essentially, Secure ShellFish makes my Mac mini just another file source inside Files, granting access to all my important Mac documents directly from my favorite devices: my iPad and iPhone. The same can be accomplished for any other SSH or SFTP server that’s configured in Secure ShellFish.

Panic’s Transmit used to be the go-to option on iOS for FTP access, but after the app was removed from sale and development discontinued, it’s been hard to find another strong contender. Certainly the App Store’s vast catalog contains alternatives, such as FileBrowser and File Explorer, both of which Federico has recently relied on, but Secure ShellFish stands alone as an SFTP app designed exclusively to work with Files. This means the app does the best job of any alternatives at maintaining a consistent connection with Files, but it also means support for Open-in-Place and file bookmarks in compatible apps – so an app like iA Writer, for example, can save a Secure ShellFish directory as a bookmark to enable persistent access to everything in that bookmarked folder, with full read and write capabilities such that duplicate copies are never created and changes are automatically kept in sync.

Document backup solutions have historically been difficult to implement on iOS, but one auxiliary benefit of using Secure ShellFish to access files stored on your Mac is that you can utilize Mac backup solutions like Time Machine or Backblaze. Thus if you set up an iOS app such as iA Writer or Textastic to access bookmarked directories from your Mac, so that you’re working in native iOS apps but using files stored on your Mac, you have all the strength of Mac backup options at your disposal. 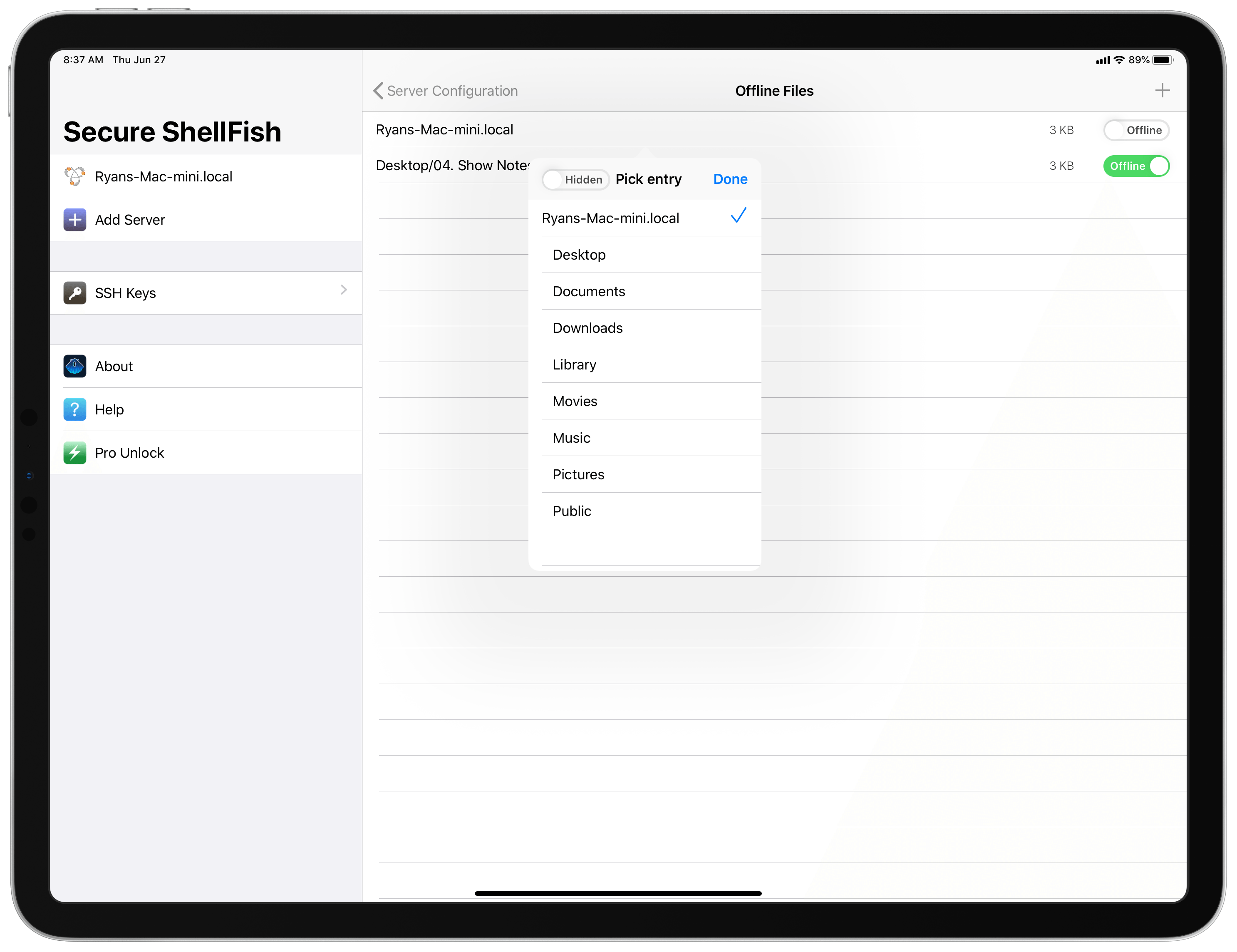 Secure ShellFish has an interesting business model, wherein almost everything in the app can be done with no purchase whatsoever. You can download the app for free, in what’s referred to as an evaluation period, but occasionally you’ll be asked to make an In-App Purchase to unlock full functionality. Currently, that purchased unlock enables offline syncing of files and directories. Due to the nature of integration with the Files app, even without that In-App Purchase you can simply visit Files at any time and hit the cloud icon next to a Secure ShellFish file to download it offline; however, Files’ methods for managing offline documents are inconsistent, and will often remove a file from the app’s cache unexpectedly. Secure ShellFish’s own offline capability grants more control: you can save not only files but also entire directories for offline use, and the app will offer persistent access to those directories so you’re never surprised by needing to download something on-demand. After unlocking full app functionality, you can set up offline access by opening a configured server inside Secure ShellFish, selecting the Offline Files option, then hitting the + button and choosing which files or directories to save offline.

Dealing with file uploads and downloads from external servers can be tricky for an iOS app, particularly due to iOS’ security restrictions that limit what an app can do while running in the background. One way Secure ShellFish mitigates this limitation is by keeping you informed of its status through push notifications. Once when I was downloading a file for offline use then moved to a separate app, I received a notification shortly afterward that I would need to reopen the app for the download to continue. Similarly, the app struggled accessing files in Documents that were stored in iCloud rather than my local Mac disk, and it sent a notification leading me to resolve that issue. While it’d be great if iOS enabled Secure ShellFish to do its job uninterrupted, I’ve found notifications a decent workaround for the platform’s limitations. They let you know when something isn’t working the way you’d expect so you can address the matter then and there.

I wouldn’t have considered myself the target user for Secure ShellFish, but in a sense I am: I would be too intimidated to use a more complex app, yet see real value in having all my Mac’s documents available while I work from my iPad and iPhone. And importantly, those documents aren’t merely made available through a separate app; instead, they’re in the Files app, the unified hub I already use for all my other files.

For an iOS-first user like me, Secure ShellFish checks all the boxes of simplifying complexity and integrating with the system that I look for in new apps. While adoption of other system features such as Siri shortcuts would be another strong addition, based on the track record of Borum’s other app, Working Copy, I’m confident that this is just the start for Secure ShellFish and the app will grow into an even more capable solution for server access on iOS.

Secure ShellFish is a free download with an essentially unlimited trial period, but the app will periodically prompt you to purchase the full app; the In-App Purchase will normally be $9.99, but is currently available at a launch-discounted price of $6.99. This In-App Purchase unlocks offline downloads for directories as well as future pro features that are in the works, such as automation support.