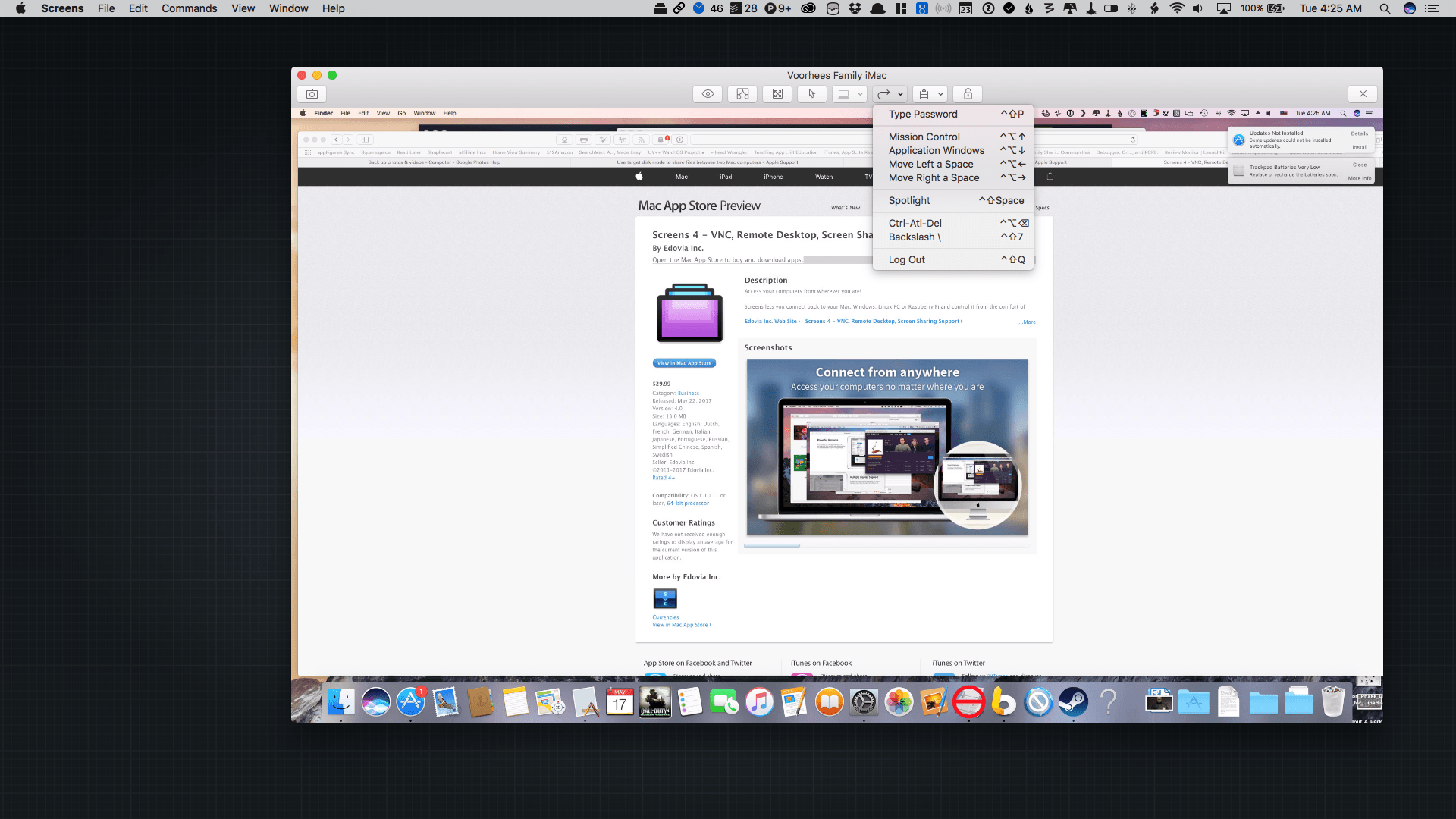 Screens 4.0, which was released today, is a complete rewrite of the screen sharing app from the ground up that adds features previously available only in the iOS version as well as some exclusive macOS-only features. What’s made Screens my favorite way to connect to a remote Mac is that it has managed to abstract away the complexity that accompanies many VNC apps. That hasn’t changed with Screens 4.0, which is even easier to use and more versatile than before.

With today’s update, Screens adds features that debuted in the iOS version of the app like Curtain Mode. After you log into a remote Mac, enabling Curtain Mode prevents anyone physically close to the remote computer from seeing what’s on the screen by showing a graphic of a padlock while you are connected to it. 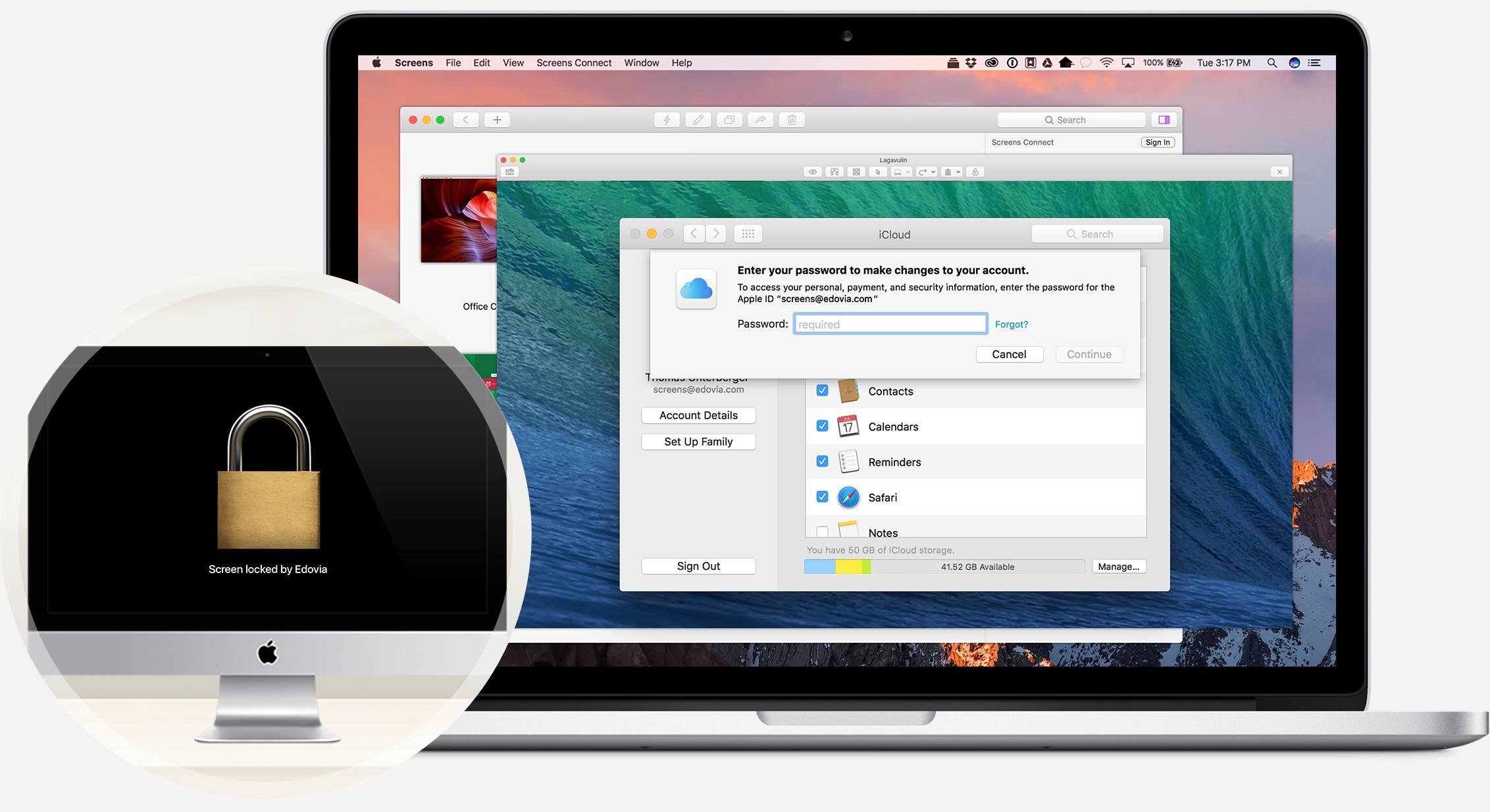 One-click passwords were also added to the macOS version, which eliminates the need to enter your user account password over and over. Instead, once it’s set up, you just click a button. Screens supports groups now too, which helps keep everything tidy and organized if you create connections to multiple computers.

The update adds some great exclusives for Mac users. The first is drag and drop file transfers. Simply drag a file from either Mac to the other to transfer it. The process couldn’t be simpler. In my tests, file transfers were surprisingly fast for a remote connection. Edovia says that in its testing, transfers using Screens can be faster at times than using the Finder itself.

Another unique feature added is Touch Bar support. Screens is an app where the Touch Bar makes a lot of sense. If you’re connected remotely to another computer, you want to maximize your view into that machine, which means running Screens in full-screen mode. Without a Touch Bar-enabled MacBook Pro, that means giving up easy access to Screens’ toolbar, but if you have a Touch Bar Mac, you can have the best of both worlds. Screens’ toolbar is available in the Touch Bar, which means you can do things like toggle Curtain Mode, zoom into the remote screen, send and receive the clipboard contents between connected computers, and control many macOS system features on the remote machine.

Screens’ core tools are available from the Touch Bar.

Screens has made a bunch of other under-the-hood performance improvements too. Screens now uses OpenGL graphics to speed up the drawing of the remote computer’s screen. Screens features momentum scrolling for the first time, which makes scrolling windows remotely feel more natural. Finally, saved screen connections can now be synced among your Macs and iOS devices using iCloud even if you purchased Screens on Edovia’s website thanks to Apple’s easing of the restrictions of which apps can use iCloud.

Screens is my favorite app for connecting to my Macs remotely. The continued refinement of the iOS and Mac versions mean I’ve had no reason to look elsewhere because what was a solid, easy-to-use app has only gotten better over time. Last year’s major update to the iOS version of Screens managed to leap ahead of the macOs version for a while, but now the macOS version of screens is just as good as the iOS version, while also playing to strengths that are unique to the Mac.

Screens is available on the Mac App Store, Edovia’s website, and as part of the Setapp subscription service. For existing users who bought Screens 3, Edovia is offering a 40% discount to upgrade to version 4.