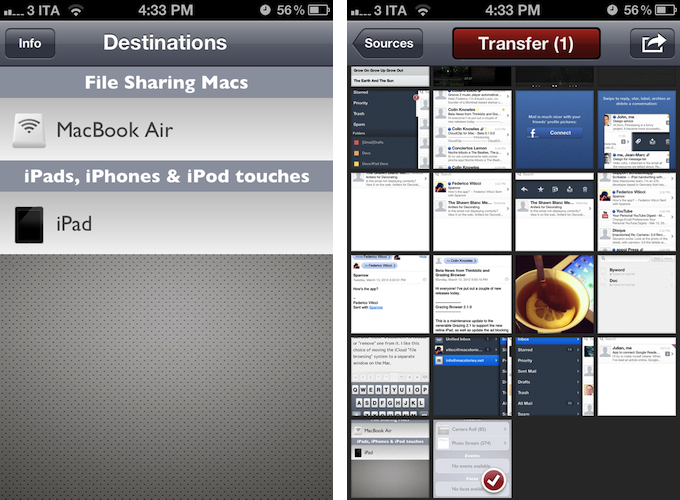 Previously known as PhotoToMac, Scotty is one of my most used apps on the iPhone. And now, thanks to two major updates released in the past weeks, I’ll be able to enjoy Scotty on the iPad as well.

Scotty transfers photos from an iOS device to a computer running OS X using a Mac’s native support for File Sharing. Once active, Scotty will look for a computer on the same WiFi network to initiate a file transfer; the app can pick photos from the Camera Roll, Photo Stream, Events, and Faces, and it’s capable of copying files to subfolders or any other location configured with File Sharing on OS X. The process of transferring files is largely unchanged from my review, only now Scotty has a new user interface design (I like it a lot better) and runs natively on the iPad.

Support for the iPad was introduced a couple of weeks ago and preluded the addition of a (very convenient) new functionality: Scotty can now transfer photos between iOS devices using Bluetooth or WiFi. Once installed on, say, an iPhone and iPad, Scotty will automatically recognize another device when the app is open and running in the foreground. To start a file transfer, you can select an iOS device, pick your source, and wait while Scotty copies the images over WiFi or Bluetooth. What’s really nice is that, whilst Scotty will have to be open during a file transfer, images will be copied directly to the iOS Camera Roll, and transfers to an iOS device pause and resume automatically if a device disappears/reappears from the network. 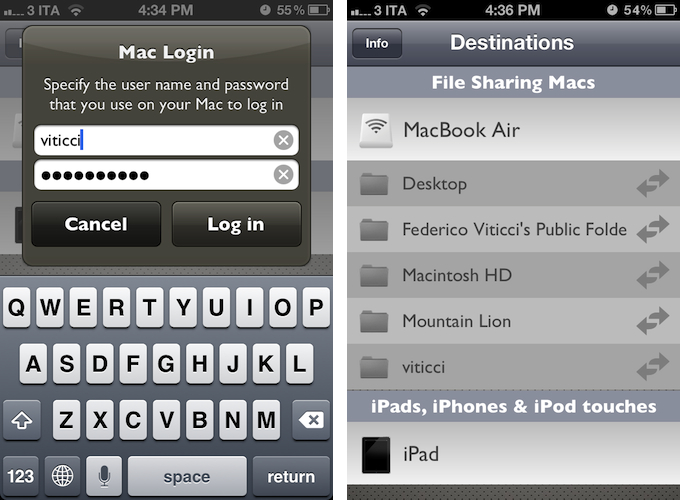 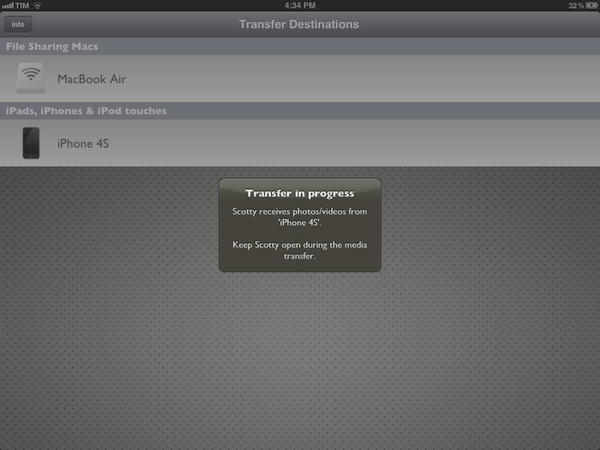 There is no doubt the introduction of Photo Stream has diminished the need of tools like Scotty for the majority of users. However, I believe there are still some scenarios in which an app like Scotty can become an invaluable utility. For one, if you’re a blogger, you’re going to need Scotty. Especially if you write news and happen to have iOS devices, Photo Stream isn’t the most reliable service to get screenshots inside a post quickly, and Scotty can help in getting images from the iOS Camera Roll directly onto your Mac in seconds. Furthermore, Photo Stream doesn’t work on 3G, while Scotty can transfer images over a local network or WiFi. And last, if you’re considering an entirely iOS-based photo editing workflow thanks to the recent release of iPhoto for iOS, you might want to consider Scotty to get your iPhone 4S photos on your iPad without waiting for Photo Stream.

Scotty isn’t as automatic and “invisible” as Photo Stream, but for this very reason I think it’s worth considering a purchase – it is the best solution I’ve tried so far to copy images from iOS to iOS, and from iOS to Mac. You can get Scotty at $2.99 on the App Store.