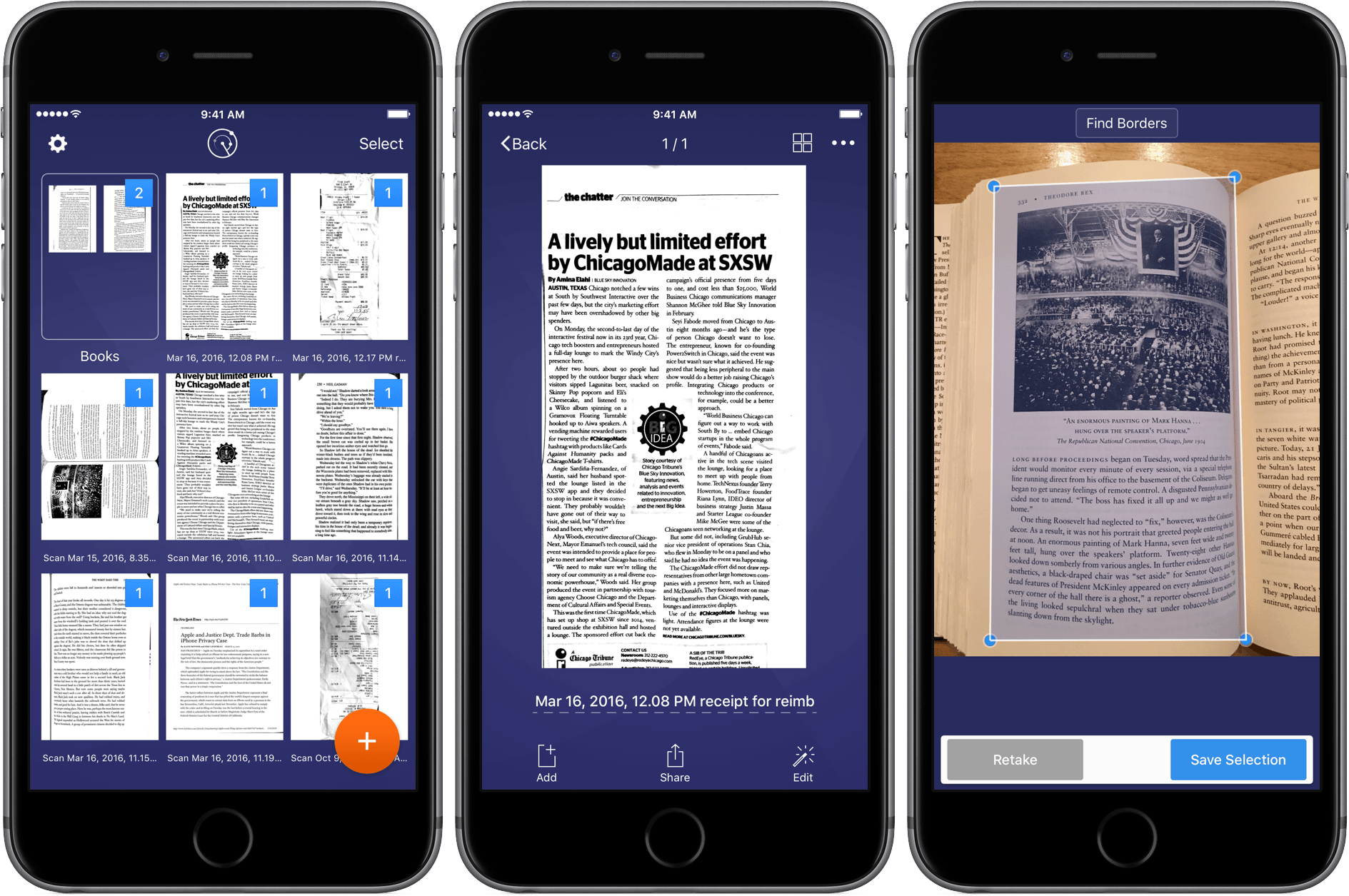 Scanning apps have become a big category on iOS. There are a lot of great options and the quality and diversity of the category creates a healthy competitive atmosphere that means frequent updates and innovations, which are great for customers. Today, Readdle launched version 7 of Scanner Pro, which adds optical character recognition (OCR), distortion correction, and a cool new trick – workflows. With Scanner Pro 7 you can chain multiple actions together and fire them off with just one tap.

Scanner Pro 7 has all the core features I expect to find in any scanning app, plus a few that set it apart from others. You take a picture of a document, make any edits you want, and then share and file the scan. Although Scanner Pro makes it as easy as possible to create multi-page documents, like automatically taking a picture of a page once it is in focus and the edges have been detected, with any iOS scanner, you are better served scanning a few pages than something like a 50-page document. Once scanned, you can adjust things like the page borders and whether the scan is stored in full color, black and white, or grayscale.

What sets Scanner Pro apart are features like distortion correction, which automatically squares your scan if you take a photo at an angle, removes shadows, and makes other adjustments to present a scan that resembles a flat sheet of paper. This also helps you get good OCR results. In my tests taking pictures from books where the text curved in towards the spine, Scanner Pro was not able to fully straighten the text, but it did as well or better than other scanner apps I’ve used, eliminated all shadows, and squared most lines of text to the page.

Scanner Pro 7 corrects distortion in images from things like books.

OCR is brand new to Scanner Pro,1 and brings it in line with apps like Scanbot and PDFPen Scan+, which already feature OCR. No iOS-based OCR system that I have tried is foolproof. To get the best results, a flat, high-contrast document works best. In my tests Scanner Pro did an excellent job with documents like black and white printouts of web pages. But that’s not a lot of fun, so I threw a few harder documents at Scanner Pro too, like books and a newspaper. The results were not perfect, especially where the text of the books curved in towards the spine of the book, and with a low-contrast newspaper article, but overall, the results were some of the best I’ve seen among iOS scanners. 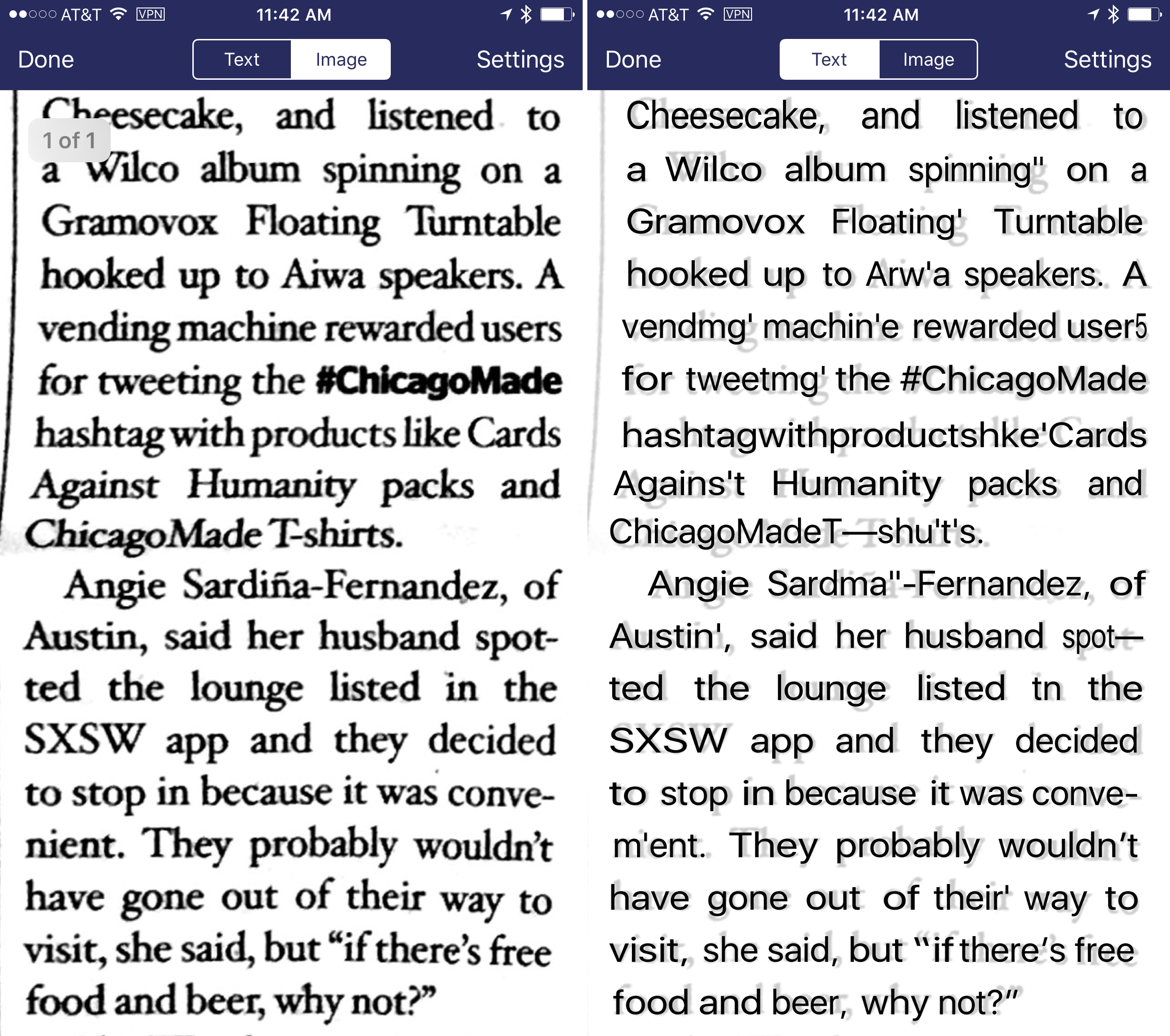 The most innovative feature of the lot is Scanner Pro’s implementation of workflows. The share button pops up something that looks a lot like the iOS share sheet, but is entirely custom. There is a toggle at the top to choose between sharing a scan as a PDF or image. Below the toggle are two rows of icons. The first row includes icons for sharing the image or PDF with other apps or services. The second row is composed primarily of cloud storage services like Dropbox, Google Drive, Box, and iCloud, but also includes Evernote, OneNote, and WebDAV.

At the bottom of the share sheet is a ‘+’ button that lets you define workflows that chain actions together. I created one that renames my scanned receipts, uploads a copy to Dropbox for my records, and attaches the scan to an email pre-populated with Federico’s email address and a pre-defined subject line. If I actually had a MacStories expense account, submitting receipts would be as simple as snapping a picture, tapping the share button and then choosing the workflow. 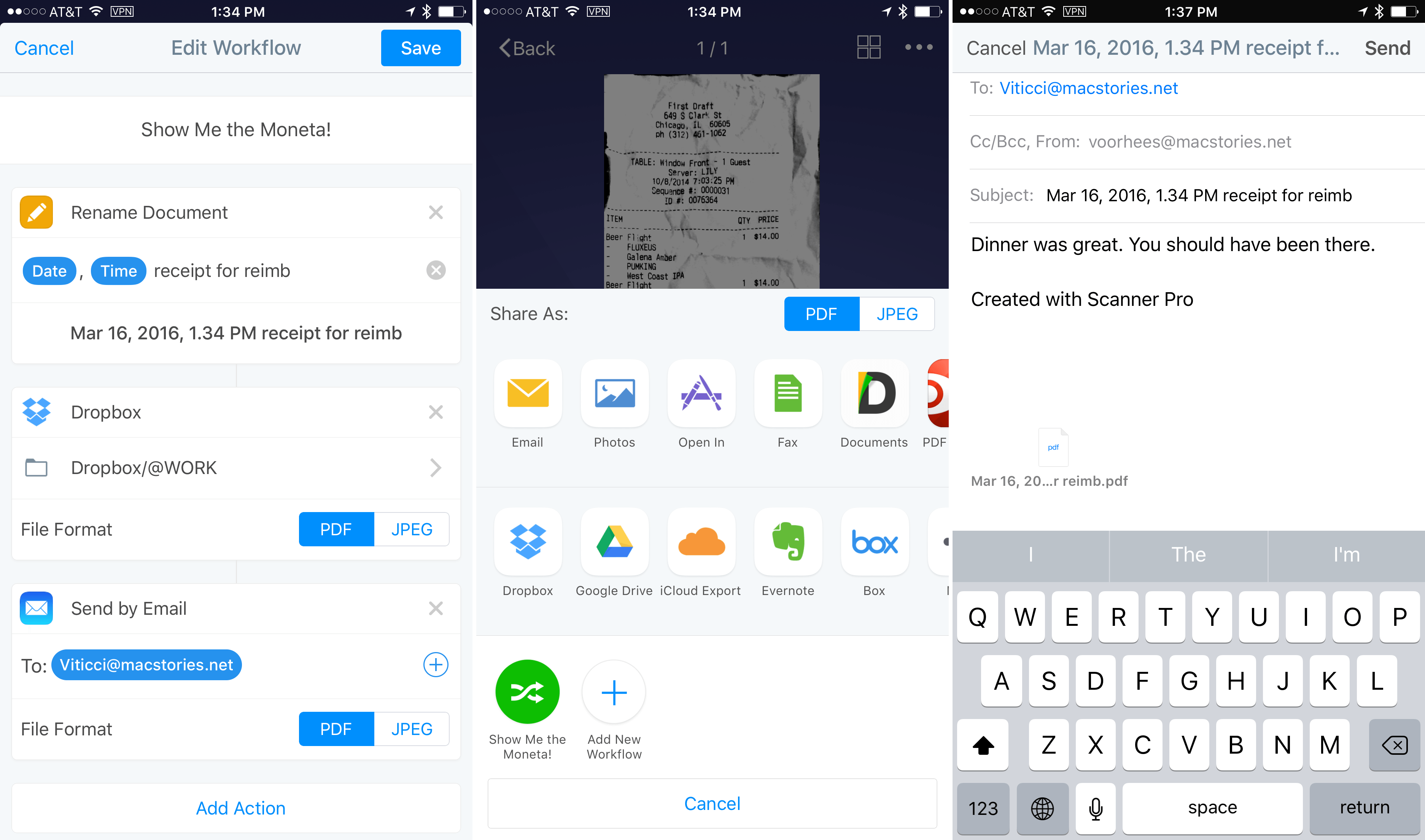 Scanner Pro is a Universal app that works with iOS 9 features like Split View. The ‘Edit’ and ‘Actions’ buttons are not available, however, while using Scanner Pro in Split View, which limited me to sharing documents. Split View can make laying out interface elements tricky on smaller iPads, but I hope that Scanner Pro’s full feature set, which is accessible on the iPhone, is also made available in Split View on the iPad in a future release.

I am not a heavy user of scanning apps, but I do use one now and then, and I especially like Scanner Pro for a couple of key features. The first is its OCR, which is one of the best OCR systems I’ve tried on iOS, making it a handy way to capture text on the go. The second, and my favorite feature, is workflows. Once a workflow is set up, it is simple to initiate several actions with just a couple taps. I expect that the addition of workflows alone will make Scanner Pro valuable to many people.

Scanner Pro 7 is available on the App Store for an introductory price of $3.99 at launch, after which it will be $7.99.