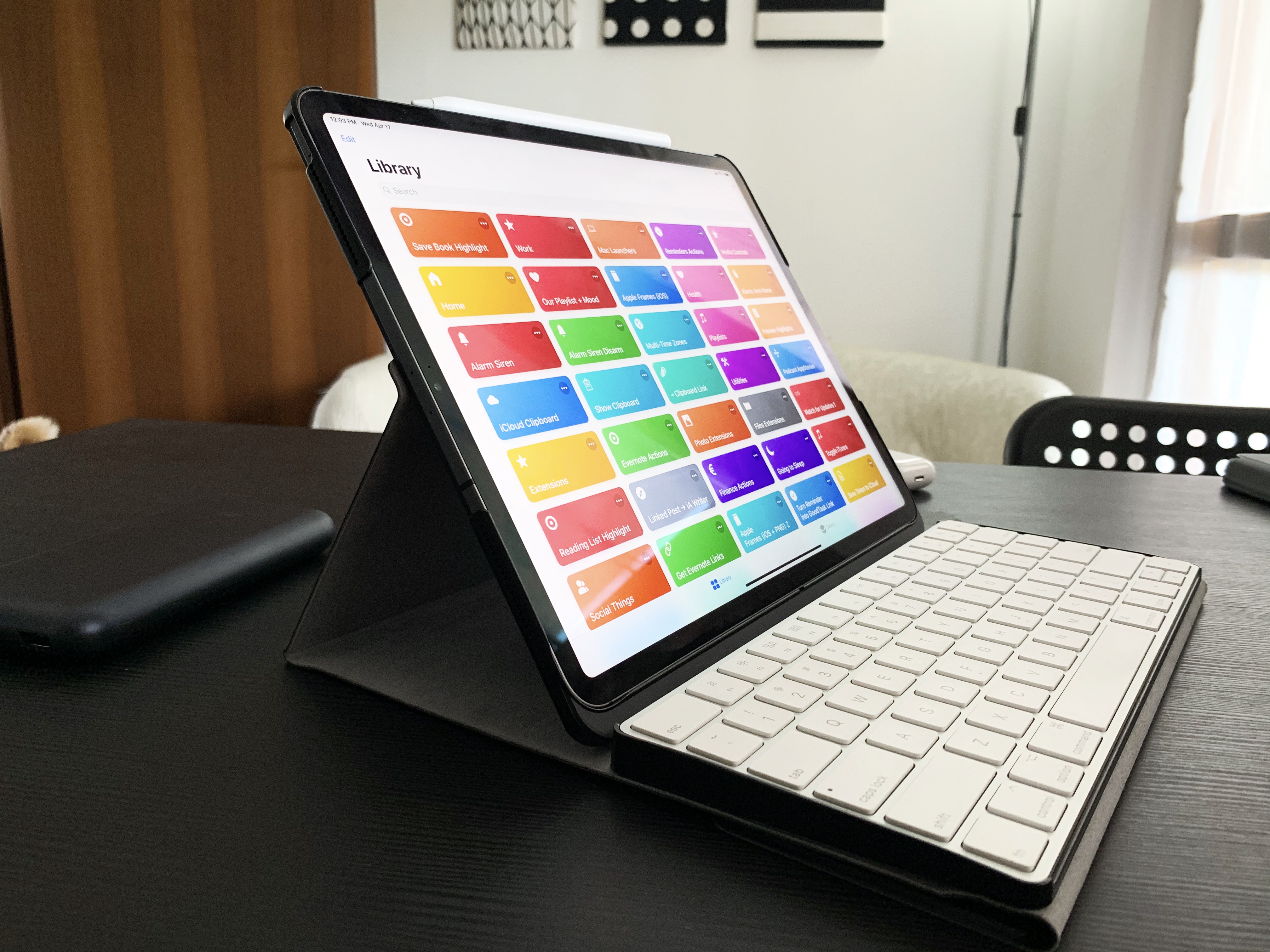 The Touchtype Pro is a clever new accessory created by Salman Sajid that aims to combine the iPad Pro with Apple’s Magic Keyboard using a flexible cover case and magnets. Sajid launched a campaign for the product earlier this month on Kickstarter, where you can check out more details about pricing and the design process of the Touchtype Pro. I was lucky enough to get my hands on an early production unit before the Kickstarter went live and I’ve been using the Touchtype Pro with my 2018 12.9” iPad Pro for the past few weeks. After sharing some first impressions on Connected, I wanted to post a few more thoughts here, along with some photos.

The Touchtype Pro consists of a hard plastic case where you place the iPad Pro; the case itself is attached to a flexible cover that wraps around the back of the iPad to create a kickstand (when placed on a desk) and which extends to cover the front of the iPad too (when closed, like a folio case). So far, nothing spectacular – the case is better than other attempts I’ve seen in the past from the likes of Logitech and Razer and there is the omnipresent microfiber lining inside to keep the iPad’s screen clean and protected.

What makes the Touchtype Pro unique is the second case that acts as a holding shell for the Apple Magic Keyboard (the second-generation one, not the old model). The Magic Keyboard’s case can be attached magnetically to the bottom edge of the iPad’s case; in doing this, the keyboard itself sustains the iPad at an angle and allows you to type without interfering with the Home indicator of the iPad Pro – a common issue of other Magic Keyboard accessories I’ve covered before. 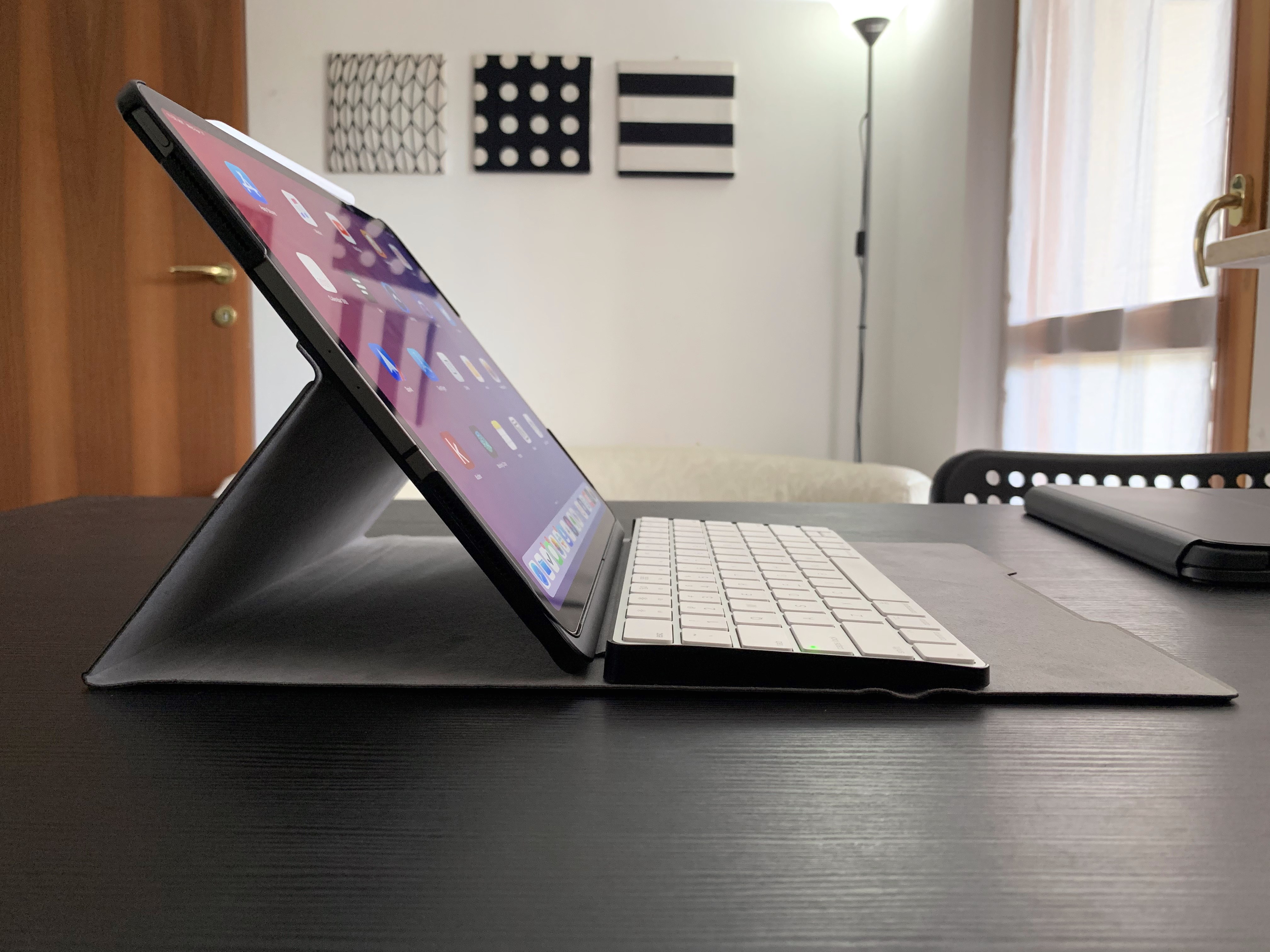 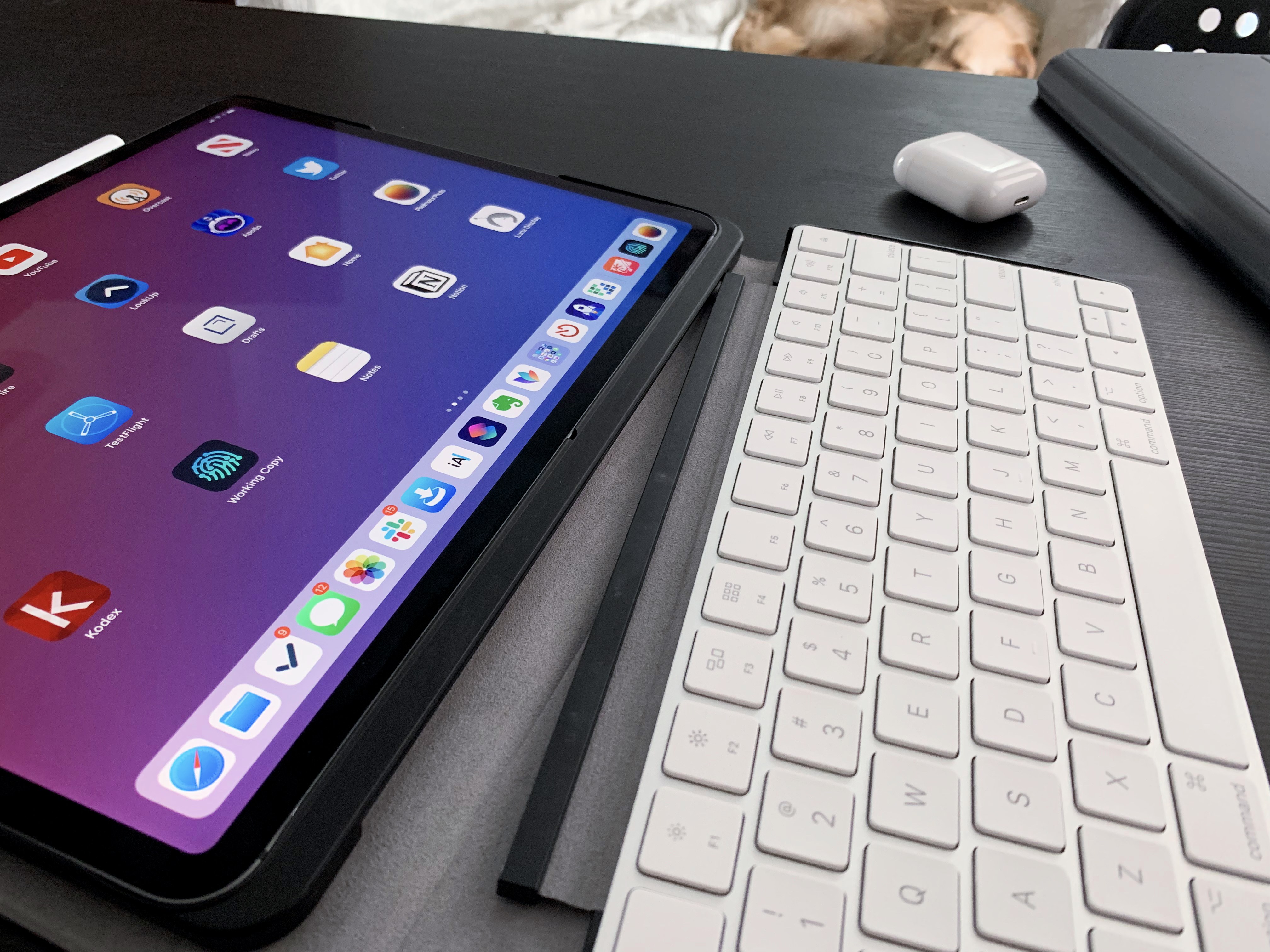 The magnetic attachment for the Magic Keyboard’s case.

But here’s the best part: the Magic Keyboard’s case has magnets at the bottom that can slide across the main cover when it’s unfolded on your desk. This “train tracks” system lets the Magic Keyboard act as the mechanism that adjusts the iPad’s viewing angle: push it towards the back of the cover, and you create a steeper angle; slide it towards you, and you end up with a more comfortable viewing mode when typing at a desk. These are a lot of words for what can be easily explained by this GIF:

The other detail that makes the Touchtype Pro different from other iPad cases and Magic Keyboard covers I’ve tested in the past is the fact that its integrated case design lets you carry the keyboard and iPad Pro together when everything’s closed. When you’re done working, you can turn off the Magic Keyboard (the keyboard’s case has an opening in the front so you can access the power switch and charge it), flip it behind the iPad so the keys are facing out (against the Touchtype Pro cover), and fold the front of the Touchtype cover to hold everything together. The final result is a single package that is bulky and adds considerable weight to the iPad (more below) and that looks like this: 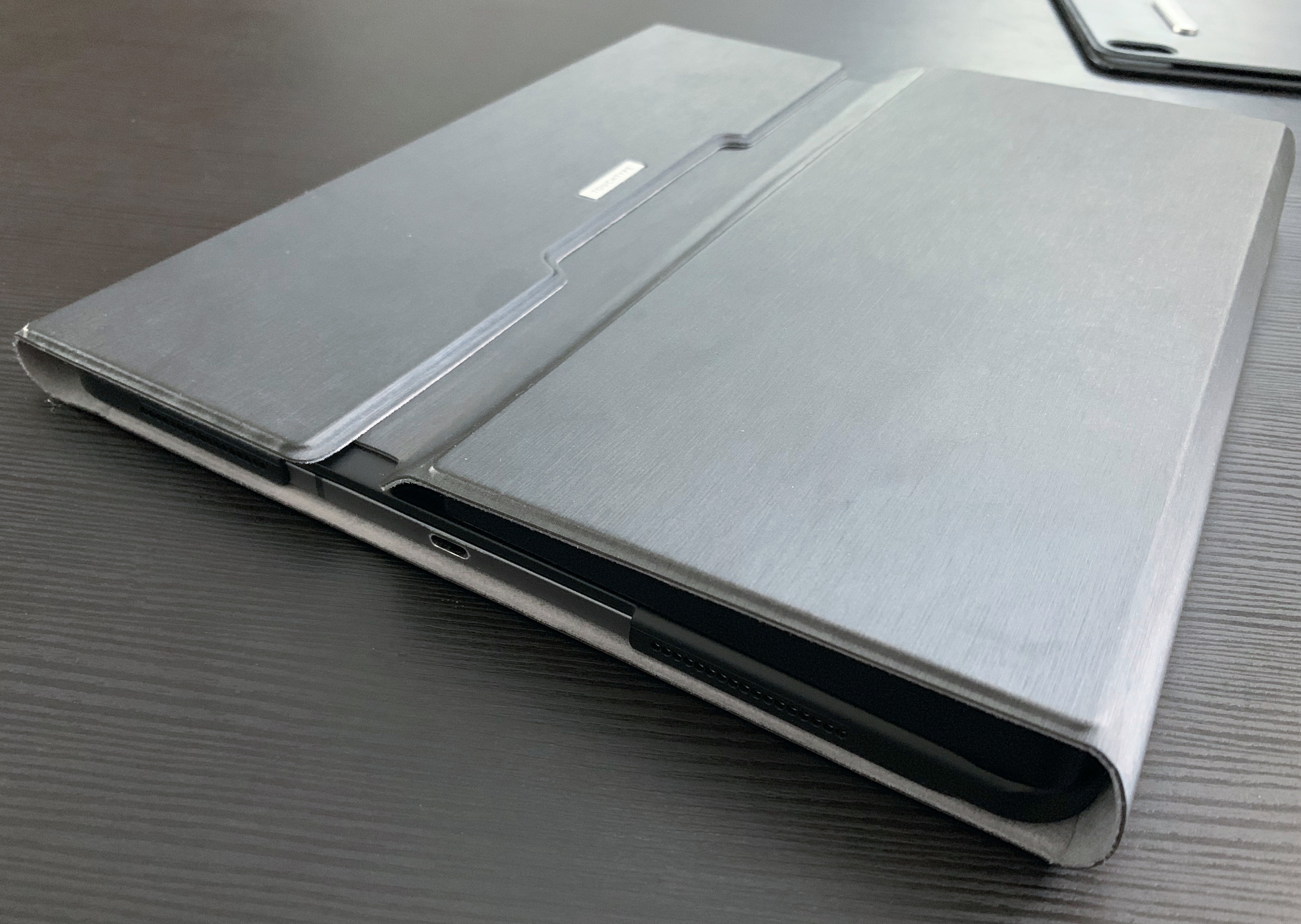 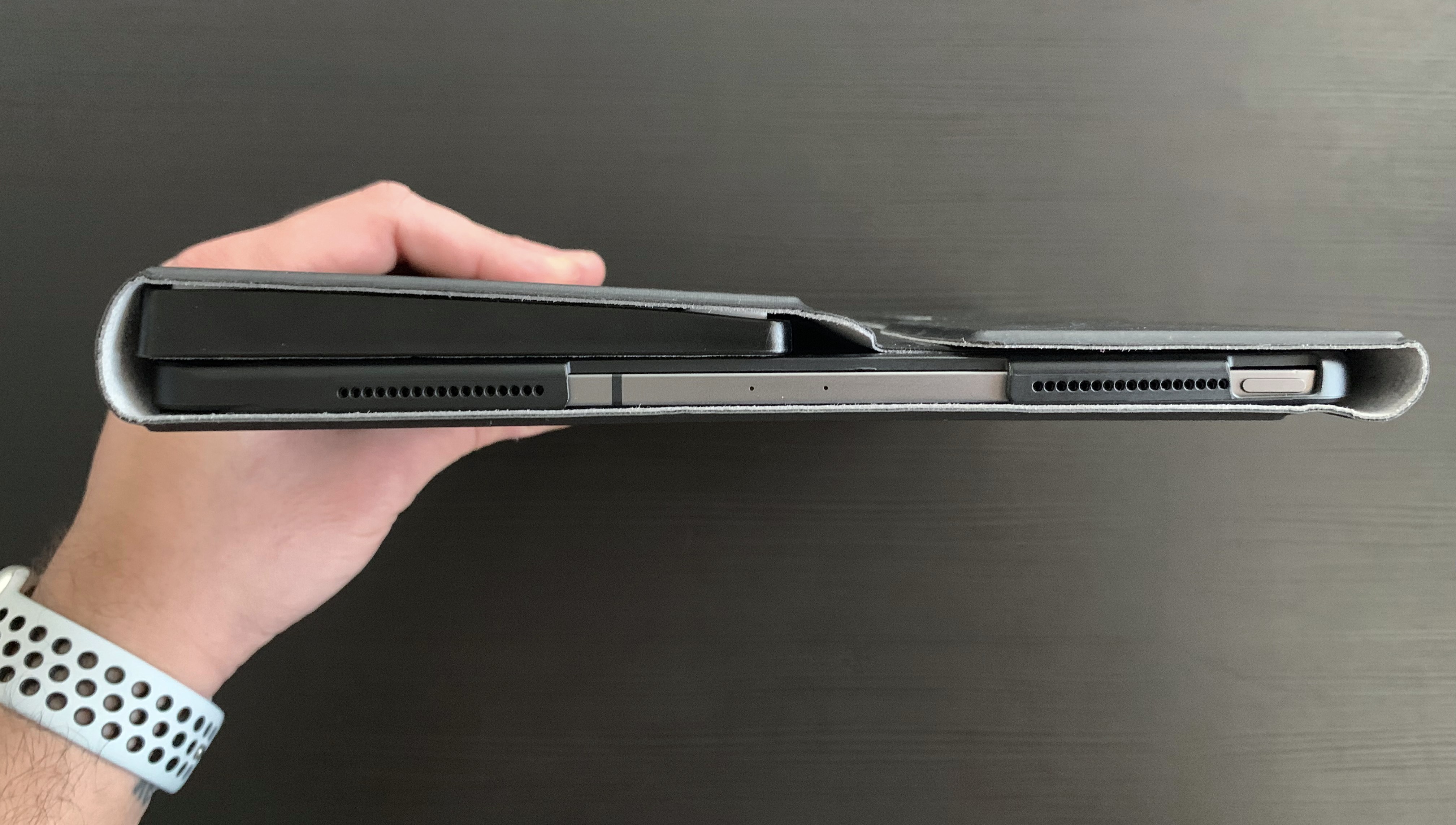 As you can see, there’s another benefit to Touchtype’s wrap-around cover: when it folds over the top side of the iPad Pro, it also protects and holds the Pencil in place, so it’ll never detach if you throw the Touchtype Pro in a bag.

After working with the Touchtype at my kitchen table and while waiting in the car for the past couple of weeks, I think it’s the overall best option if you want to integrate the iPad Pro and Magic Keyboard with only one accessory – provided that you can accept some of its caveats.

I’ve written about the Magic Keyboard multiple times on MacStories in the past, but for context: I like the feel of Apple’s keyboard (and use its larger Space Gray cousin at my desk with the Mac mini), but there are two aspects I don’t like about it: the Magic Keyboard is not backlit and doesn’t come with iOS-specific function keys.

The lack of backlighting is a well-known limitation of the Magic Keyboard line and, well, if you want to type in the dark and also look at the symbols on keys, you’re out of luck. The latter issue is more specific to pairing a Magic Keyboard with an iPad: while other Bluetooth keyboards (such as the ones from Logitech and Brydge) come with keys to go back to the home screen, show Search, or cycle between multiple software keyboards, the Magic Keyboard is first and foremost a Mac keyboard that also supports the iPad by way of Bluetooth. There are no iOS-only keys on the Magic Keyboard; in fact, it actually comes with Mission Control and Launchpad keys that are useless on iOS.1

All of this to say: the Magic Keyboard is lightweight and portable and its battery lasts a long time and it feels nice to type on – but if you’re looking for an iPad-optimized experience in an external Bluetooth keyboard, there are better options out there. The Touchtype Pro, however, is designed for folks who want to recycle their existing Magic Keyboards for an integrated iPad Pro setup, so I assume those users are already well aware of the keyboard’s flaws and advantages compared to third-party offerings.

My main gripe with the Touchtype Pro is twofold: to me, it seems to have been primarily designed as a desk accessory; and, adjusting the iPad’s viewing angle by sliding the Magic Keyboard’s case across the magnetic cover can be a bit awkward.

As I mentioned above, to adjust the viewing angle when the Magic Keyboard is attached to the front of the iPad’s case2, you have to slide the Magic Keyboard toward you. In my experience, the strong connection between the magnets placed at the bottom of the Magic Keyboard’s case and inside the Touchtype Pro cover means I have to apply a fair amount of pressure to slide the keyboard. The feature does work as advertised, and I think it’s an ingenious system to rely on the Magic Keyboard to create an angle, but it requires more attention than I’d normally want to pay to this kind of process. And because I can be clumsy with these things, I’ve accidentally detached the keyboard from the iPad (and thus made the iPad fall flat on my desk) more times than I’d care to admit. I should also note that, due to the Magic Keyboard’s design, reaching for its power switch while the keyboard is attached to the front of the iPad is nearly impossible.

Second, the Touchtype Pro feels, at least to me, like an accessory optimized for being used at a desk. Specifically, a desk with a fair amount of space available. When it’s fully extended, the cover (where you place the keyboard) can span up to 13.78” (35 cm) in length, which is not exactly compact. You can fold the cover on itself and create a thicker base for the Magic Keyboard, which helps. This folded mode is also what Sajid recommends if you want to use the Touchtype Pro in your lap, which is possible, but to me it doesn’t feel as stable as using the Smart Keyboard Folio or the new Logitech Slim Folio Pro (which I am also reviewing soon). 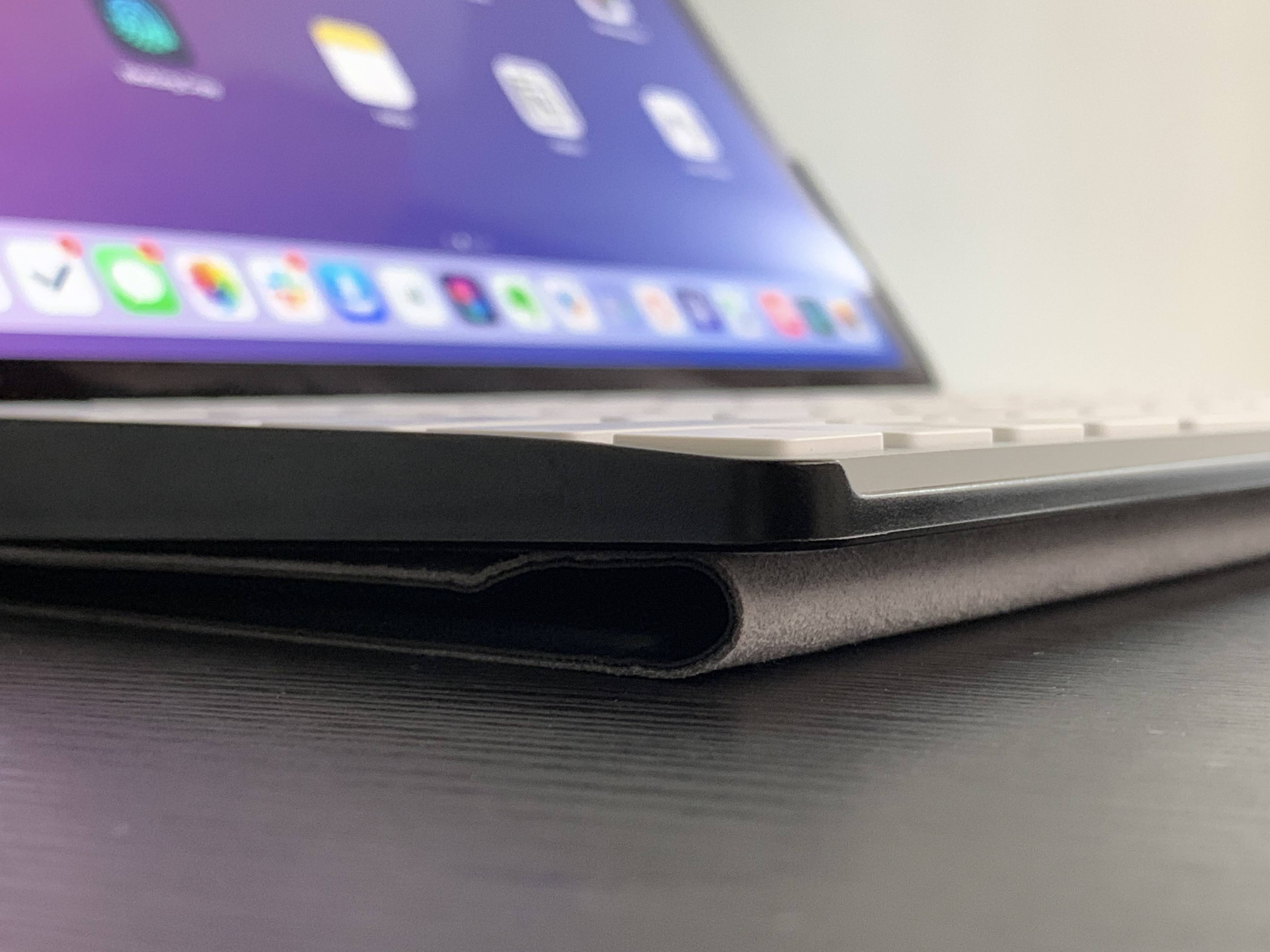 Folding the cover on itself to save a bit of space. 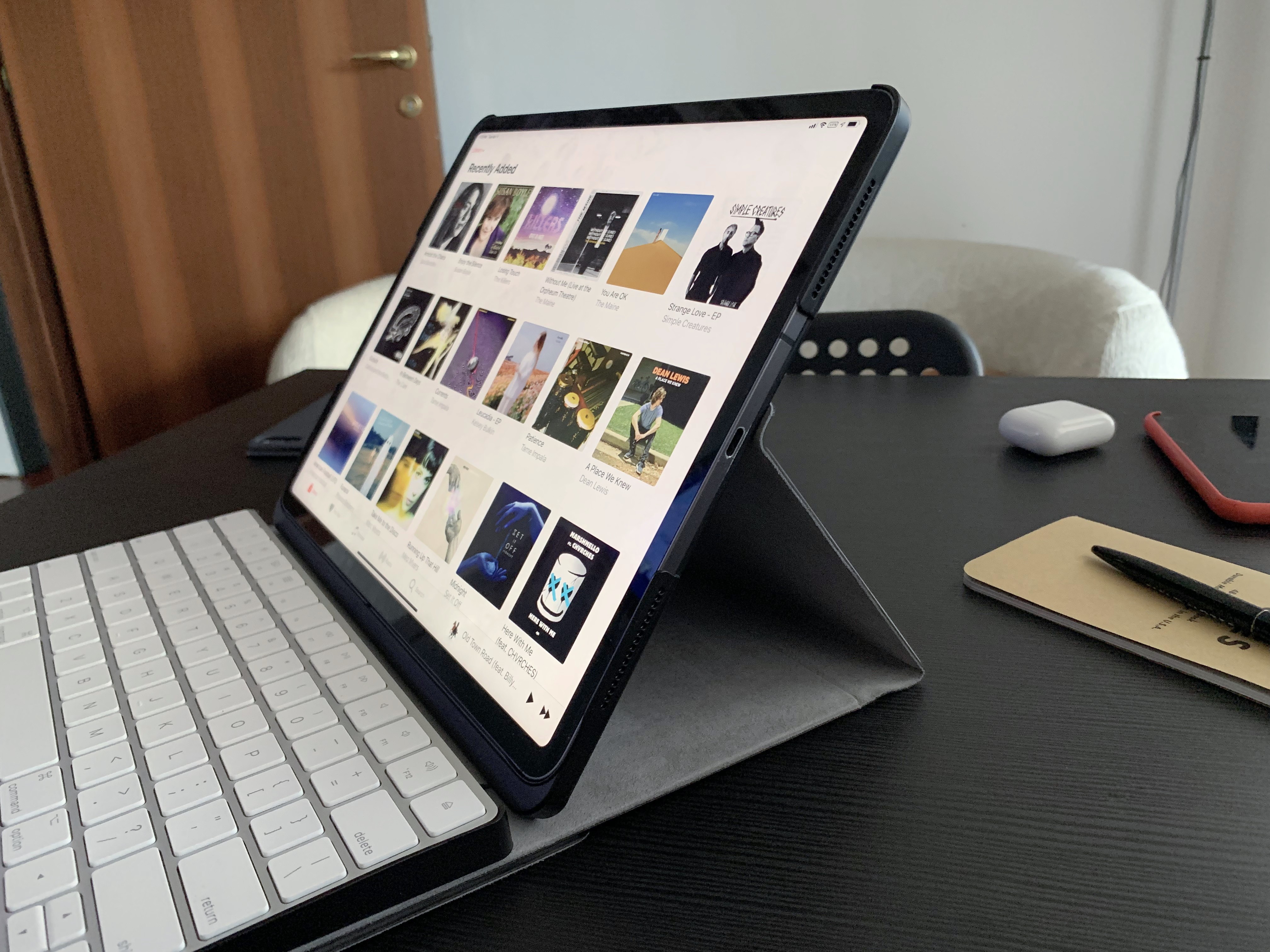 The moving parts involved with the Touchtype Pro as opposed to the Smart Keyboard Folio or Slim Folio Pro (the separate case for the keyboard, plus the cover folded on itself) contribute to the feeling that this accessory is optimized for a rigid surface rather than your lap.3 It is possible to use an iPad with the Touchtype Pro on your lap, but I don’t like it as much as I like those two aforementioned keyboards (and, I assume, the new Brydge keyboard soon enough). The magnetic flap that attaches the Magic Keyboard to the iPad’s case still fared better in my tests than the old Razer keyboard, though.

In addition to size and ergonomics, weight is a concern with the Touchtype Pro, which is also why I see it as a desk companion. A 12.9” iPad Pro with the Smart Keyboard Folio and Pencil weighs 2.35 lbs (1.07 kg); the same iPad with the Brydge keyboard is approximately 2.96 lbs (1.34 kg); paired with the Slim Folio Pro, it goes up to 3 lbs (1.35 kg); with the Touchtype Pro, the whole package weighs 3.41 lbs (1.55 kg). It may not seem like a huge difference, but, especially if you’re used to the Smart Keyboard Folio, you’re going to feel that extra pound when switching to the Touchtype Pro (not to mention the overall thickness when everything’s closed, as shown by pictures in this story).

Finally, unlike the Smart Keyboard Folio, the Touchtype Pro offers a media mode for touch interactions: just place the keyboard behind the iPad, fold the cover on itself so that its outer edge is holding the iPad at an angle, and start watching a movie or listening to music, as shown below: 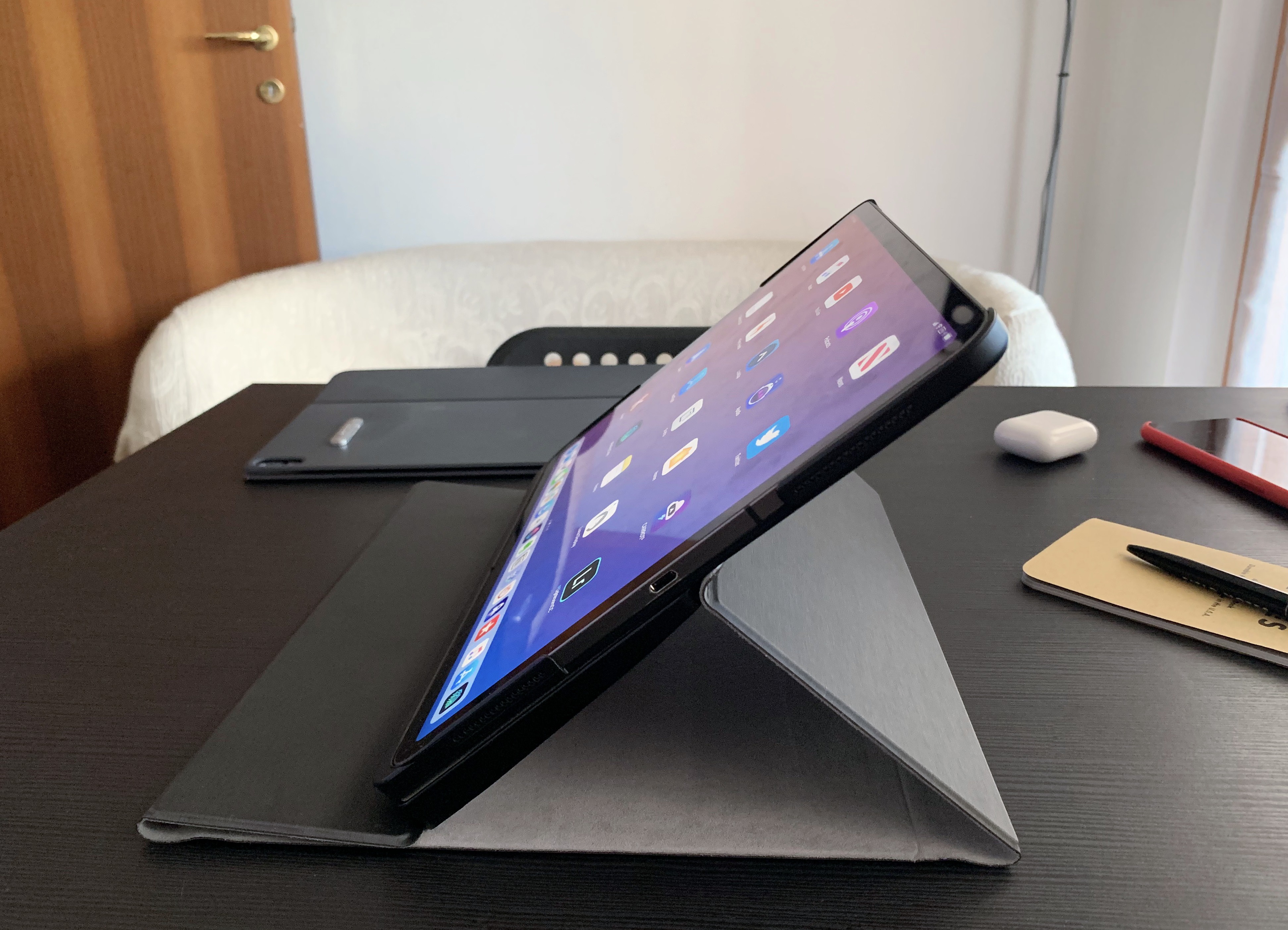 Unfortunately, because I use my iPad Pro for work, I don’t need a media mode as much as I need a touch mode for those times when I want to type using the software keyboard. The media mode supported by the Touchtype Pro has an angle that is too steep for typing, and because it relies on the front cover to act as a kickstand, I don’t find it as reliable as the touch mode supported by the Smart Folio. Then again, Apple’s Smart Keyboard Folio does not offer any media or touch mode whatsoever, so at least the Touchtype Pro tries something new in this regard.

I recognize that I’m a little particular when it comes to iPad Pro keyboards and cases and that the kind of product I seek (a Smart Keyboard Folio with backlit keys, media functions, and a touch mode) will probably never exist. Do not let my nitpicking distract you from my overall opinion of the Touchtype Pro though: if you love the Magic Keyboard, want to use it with your iPad Pro, and don’t want to buy another keyboard, I think the Touchtype Pro is the best all-in-one solution I’ve tested to date. The product has its own quirks, but as far as the idea of combining the iPad Pro with a folio case that also holds the Magic Keyboard goes, I think Sajid’s design is a solid approach.

The Touchtype Pro, in my opinion, is designed for a specific kind of customer: the iPad Pro user who wants to work with a Magic Keyboard primarily at a desk. The adjustable viewing angle, Pencil protection, support for portrait orientation, and media mode are additional, welcome benefits. Keeping in mind the nature of Kickstarter campaigns, if you’ve been looking for a product that can hold the iPad Pro and Magic Keyboard together for an ideal typing experience, the Touchtype Pro is well worth the $49 price tag for a Kickstarter unit.