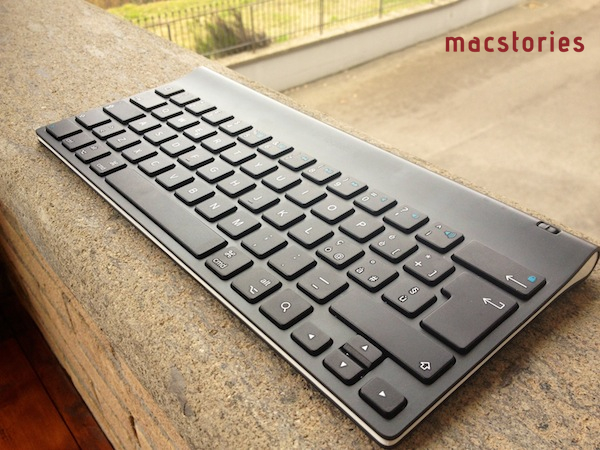 As I mentioned in my post about new apps and tools for 2012, I’ve been playing around with a Logitech Tablet Keyboard for iPad, which is available at $69 through Logitech’s website or $59 on Amazon. The Tablet Keyboard connects to the iPad (or any iOS device) wirelessly over Bluetooth, comes with built-in batteries, a carrying case that can be turned into a stand for the iPad, and media keys that trigger some of the tablet’s functions such as audio controls and Spotlight. Here are my impressions so far.

Normally, I wouldn’t have much to say about a keyboard except for “it’s comfortable” or “I can’t type anything on this”. Fortunately, the Logitech keyboard for iPad fits into the former category, with a sturdy plastic design that feels “premium” when compared to other keyboards available on the market, a good keyboard layout, and a carrying case that’s not as premium as the device but certainly gets its job done. Below, the Italian layout of my Logitech Tablet Keyboard: 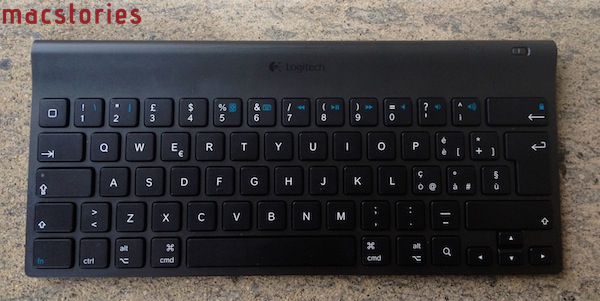 As you can see, the keyboard isn’t necessarily “standard” as it’s been designed to include iOS-specific keys like shortcuts for Spotlight search, Home button, volume controls, slideshows, media playback and screen lock/unlock controls. The basic layout is the one of a Mac keyboard, and the function keys can be activated by holding fn. Obviously, this isn’t as intuitive as simply reaching out to the screen with your finger to adjust volume, but if you’re going to work with your iPad using the keyboard, you’ll want to know it’s possible to do more than just type.

Which brings me to this: why would you want a physical keyboard for your iPad when the system one is more than acceptable? I don’t know about you, but I’ve been working mainly from my iPad in the past month, and I found a physical keyboard to be a must-have if you’re serious about getting real, regular writing done in a text editor or word processor. iOS’ multitouch keyboard is fine to fire off quick email replies and tweets (and iOS 5’s new split keyboard helps a lot for “general typing” in every day usage), but I still can’t give up on the allure of plastic QWERTY for long-form content and serious email time. Logitech’s iPad offering fits nicely in my workflow (and Tom Bihn Ristretto Bag): I can get it out of its case, turn it on, wait a few seconds for the iPad to connect (once paired, the Bluetooth connection process is very fast on iPad 2) and start writing.

If you’re familiar with iOS and Bluetooth keyboards, you’ll know that the system will automatically hide the software keyboard when a physical one is connected, letting you manually bring it up again if you need access to, say, application-specific keyboard layouts (such as the extra rows in text editors, which will disappear partially or entirely depending on how developers choose to support wireless keyboards). Third-party application support aside, Logitech provides keyboard shortcuts for several default iOS functionalities such as copy & paste and text manipulation. A full list of supported keyboard shortcuts is available here, and I’ll admit I made extensive use of CMD + C and CMD + V to move text around – makes me wish iOS had some sort of gesture for copy & paste that didn’t involve invoking a popup menu first.

I wrote for hours on the Logitech keyboard without feeling constrained or wishing I could type on a Mac. In fact, I don’t think there’s much of a difference coming from a 13-inch MacBook Air – the Air’s keyboard certainly has more spacing between keys and letters aren’t actually stickers, but Logitech’s model doesn’t look or feel cheap as other iPad standalone keyboards unfortunately do. Obviously, the Mac has a backlit keyboard, a more consistent typing experience and an overall nicer sound when you hit the keys, but I believe Logitech’s tablet keyboard beats most of those clamshell cases/external keyboards that seem to be so popular these days.

Overall, I can say I’m able to write actual articles and emails using Logitech’s tablet keyboard: the device doesn’t move when on a desk thanks to five (four + one) pre-installed rubber feet, the sound of the keys is decent and, like I said, keyboard construction doesn’t make me feel like I’m typing on a cheap plastic accessory. I especially like the sandwiched black & white design and unobtrusive Logitech branding. 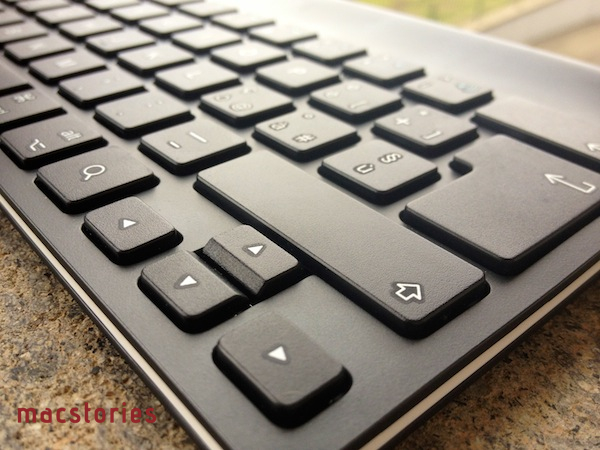 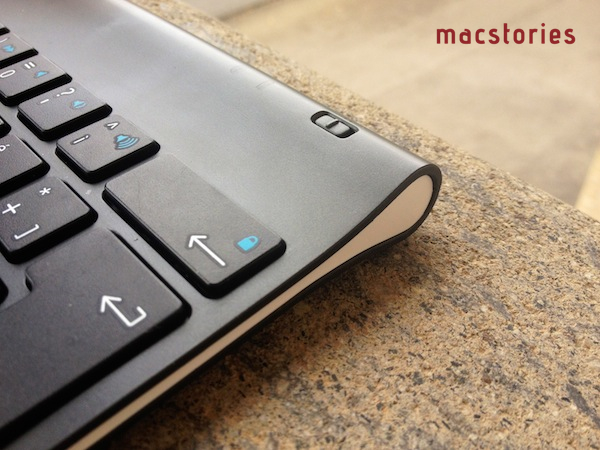 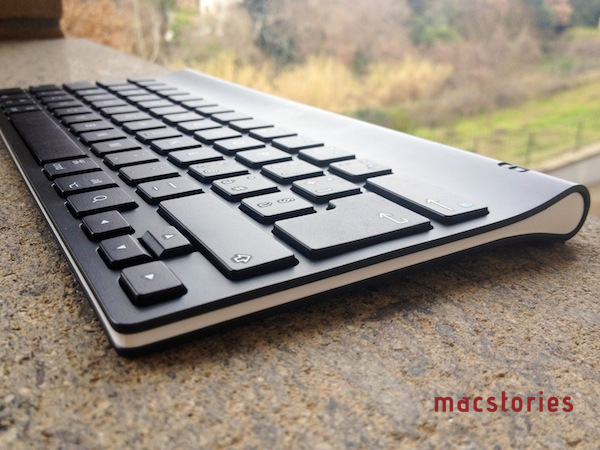 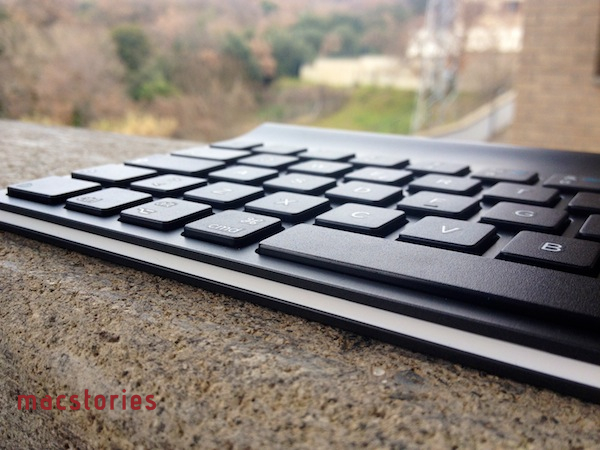 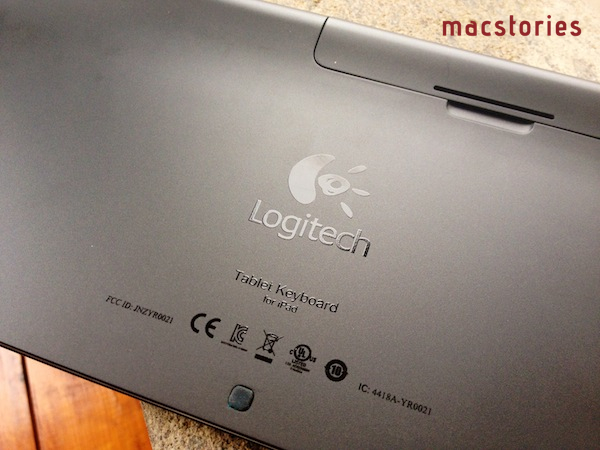 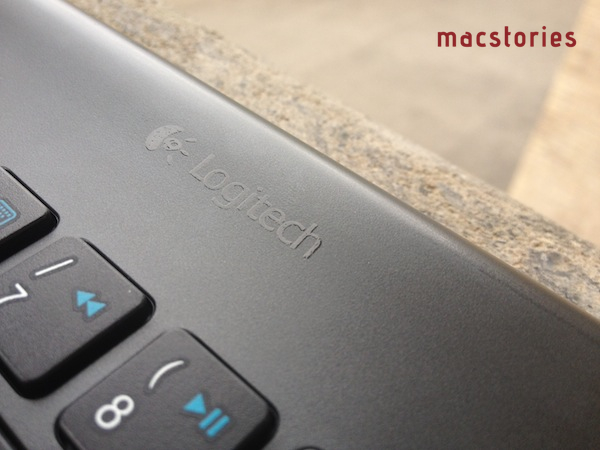 Normally, the back of a keyboard wouldn’t be worth a paragraph of its own, but I like how Logitech decided to place the Connect button (to manually restart connections) and battery slot. 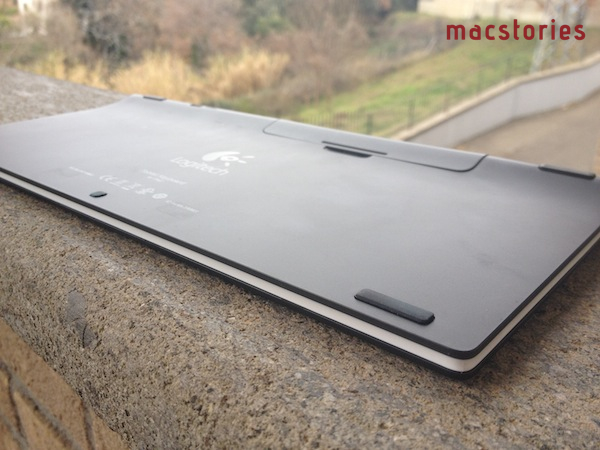 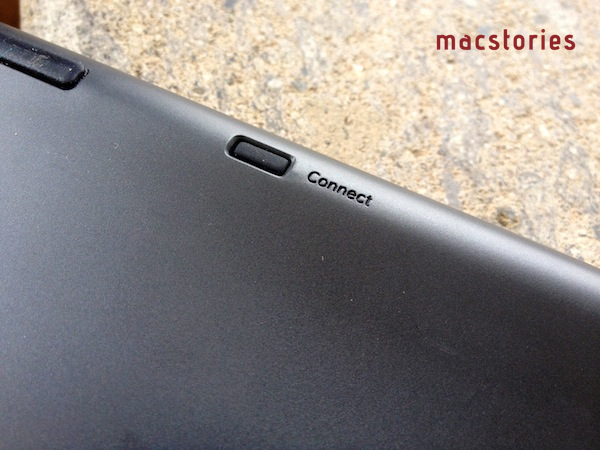 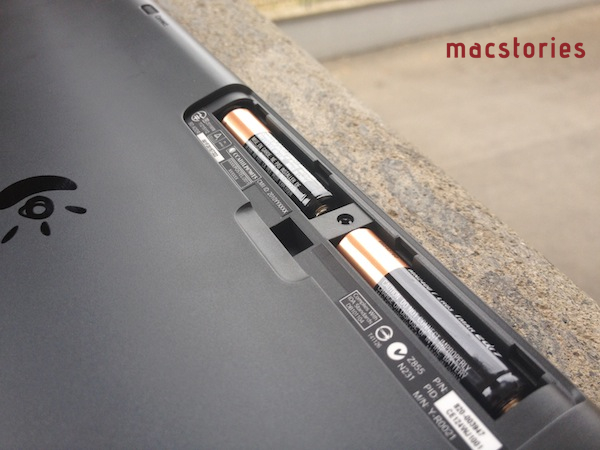 One of this keyboard’s peculiarities is the carrying case that turns into a stand for your iPad when you need to type on a desk or any flat surface (I haven’t had positive results with the stand on my lap). The case itself is made of plastic and has a nice leather texture on the surface; the two sides of the case automatically attach through a small magnet, which is a nice touch. The case can be opened and turned into a rather sturdy stand with two viewing angles for your iPad; I don’t like the quality of the plastic piece that holds the stand together, but I appreciate the option of picking two different angles. I would have liked this piece to be some sort of aluminum, but then again that would have probably added up to the device’s price tag and weight. Fortunately, the stand is sturdy enough you can still point your finger at the iPad’s screen and tap without causing unfixable accidental movements, though of course it won’t last a Fruit Ninja session. I’d suggest tap on screen only when necessary so to keep the iPad in your preferred position and angle whilst in the stand. 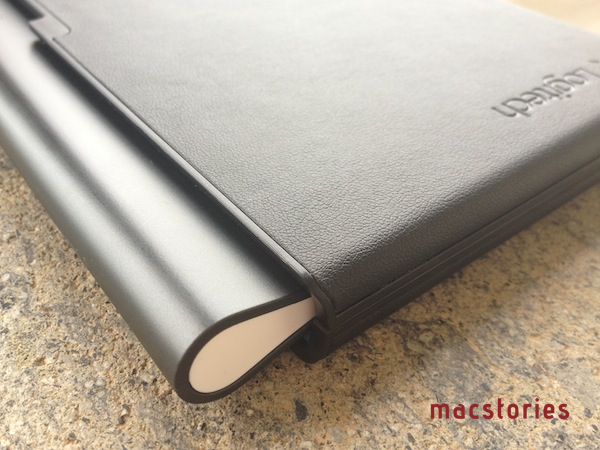 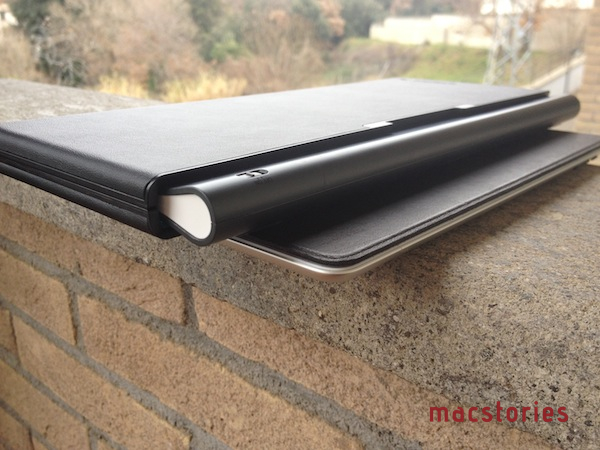 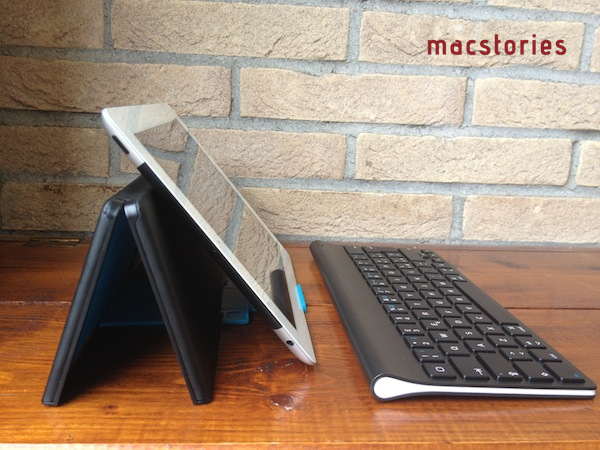 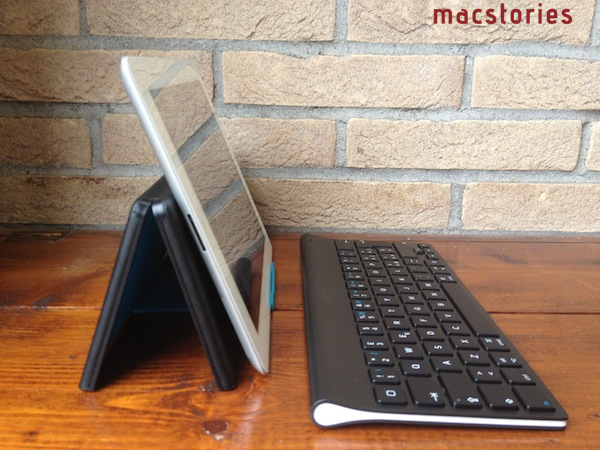 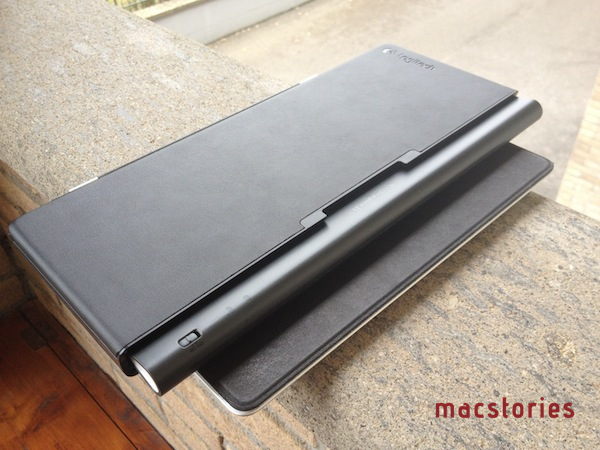 Some miscellaneous notes of interest:

Logitech has been busy developing some interesting iPad accessories. The Tablet Keyboard for iPad doesn’t come cheap at $69, but it’s a product I can trust to recommend as it’s turned out to be a good companion for my writing over the past weeks. If you’re in the market for a portable iPad keyboard, I’d consider this one and Apple’s own wireless model. If you don’t mind the plastic but would like to have a carrying case that also happens to be a good stand, Logitech’s Tablet Keyboard for iPad is a great choice.