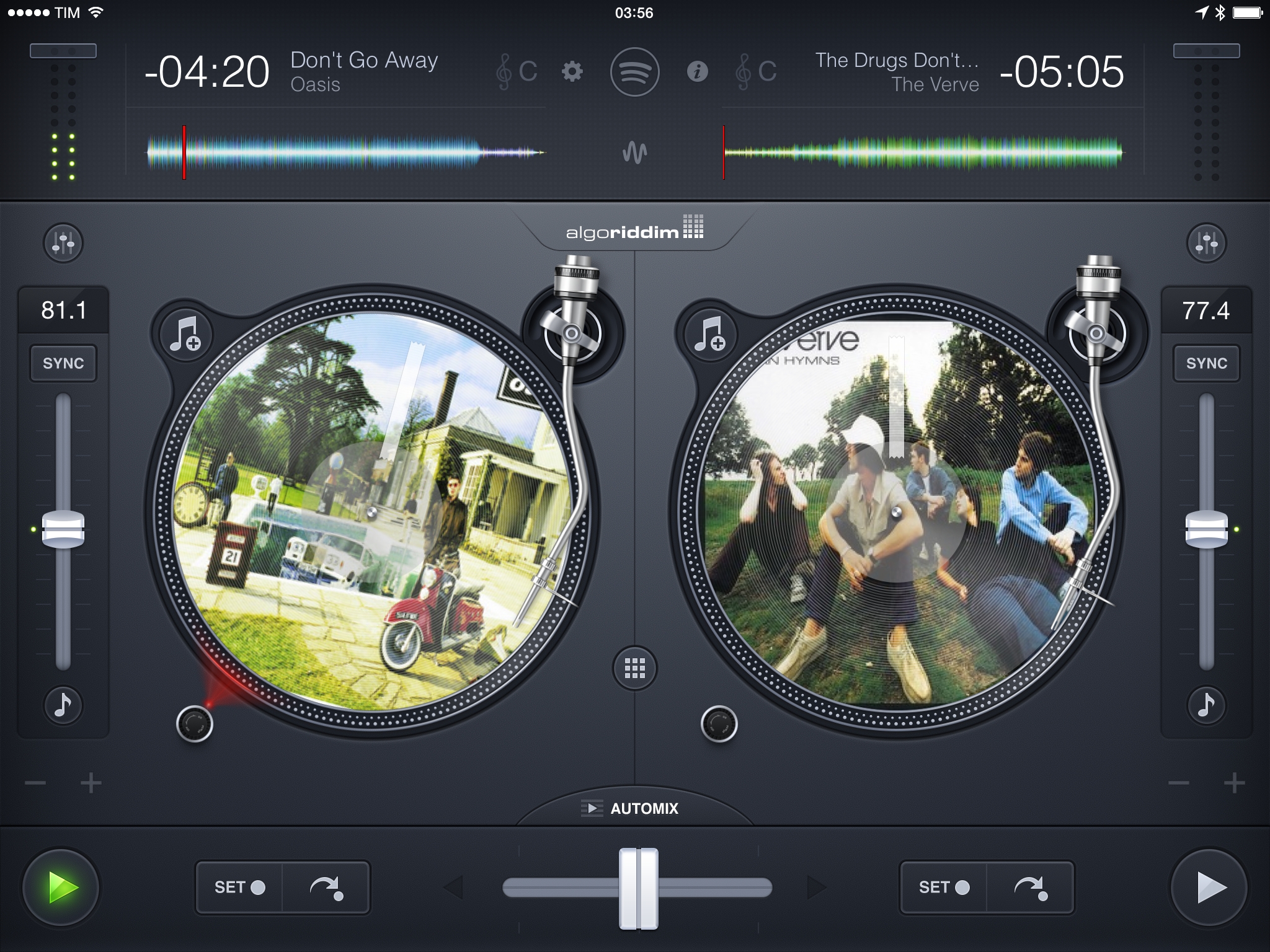 Since its first release in late 2010, Algoriddim’s djay was always met with the same question: without the right songs on your iPad, how can you fully enjoy the app? Three years and numerous awards later (including an Apple Design Award in 2011), Algoriddim wants to tear down the barrier to entry for its popular DJ software with a simple, yet technologically complex solution: full Spotify integration.

djay was one of the first apps to show the capabilities and potential of the iPad’s canvas when Apple was really pushing the idea of “post-PC era”: by replicating the classic setup of turntables through a skeuomorphic design and combining it with the advantages of multitouch and iOS, djay offered a modern take on DJ software that was refreshing and fun. You could easily import songs from your music library, spin discs and scratch with your fingers, and even tweak and sync BPM with the touch of a button. djay gained features and millions of users over time, was refreshed for iOS 7 with a slightly cleaner interface, and was often spotted at Apple keynotes in slides showing iPad apps that had been designed for the device’s large display rather than enlarged to fit it.

The app was a success, but the problem remained: to use it, you had to make sure your iOS music library contained songs that could be suitable for a DJ session. Without songs already available in the iOS Music app, djay was essentially useless, so Algoriddim decided to fix the problem by partnering with Spotify and making a catalogue of over 20 million songs available for streaming directly inside the app.

Spotify streaming in djay lives alongside the old picker for songs from Apple’s Music app, and it requires a Spotify Premium account; with the partnership, Spotify is offering a 7-day free Premium trial to djay users, which is added to the 30-day trial (expired or not) provided by Spotify. It’s a good deal, and I’ve been able to test the feature using my personal Italian Spotify account. 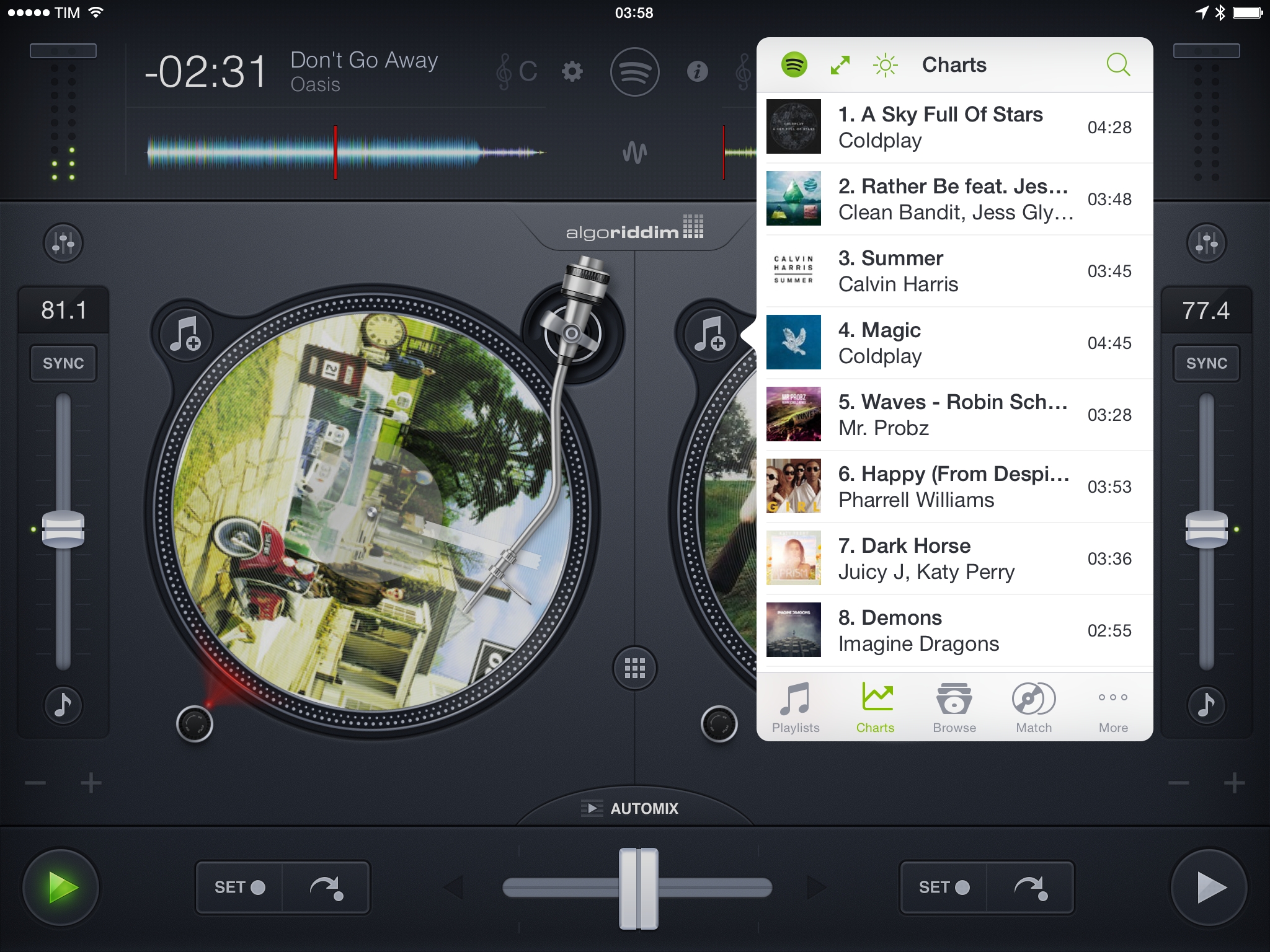 djay’s basic structure and purpose have stayed the same: you pick songs, you interact with the virtual turntables, and you can make everything sound cool with effects and custom beats. In the new Choose Library menu, you can now switch between iTunes or Spotify as sources; pick Spotify, and after granting access to your account you’ll be presented with a popover to view your existing playlists, top charts for your area, the Browse section, and a selection of tracks automatically suggested by djay using Spotify’s data from The Echo Nest. At the top of the popover, you’ll find search, a button to switch music sources again, an icon to use a dark theme, and a shortcut to turn the popover into a full-screen Spotify view.

The Spotify integration is impressive, especially on the iPad (djay has been updated today to version 2.5 both on the iPhone and iPad). Aside from the ability to look for any song in your playlists1 and load songs from the top charts and Spotify’s curated genres, Match removes the need to manually find a song to play next because it does that for you. Using The Echo Nest’s algorithms for song analysis, Match will quickly analyze the song that’s currently playing and recommend songs that match the session by taking into account BPM, music style, danceability, and other parameters. So, say you want to start with a specific song you have in mind, you can look for that in Spotify within djay, start playback, then switch back to the picker and either find more songs and queue them with a swipe or let Match take care of automatic suggestions; when in Match, you can tap to assign a song to a turntable or swipe to queue. 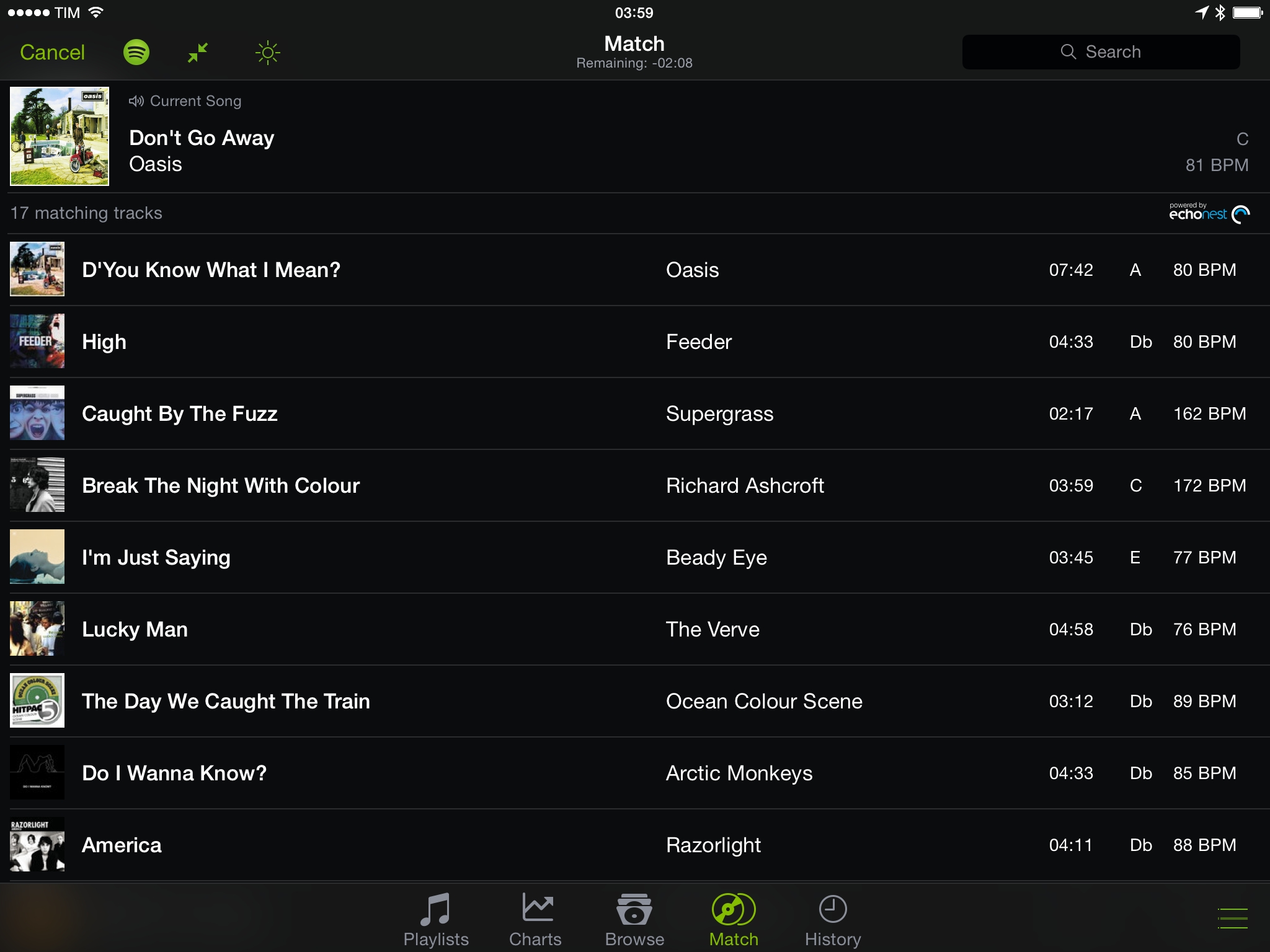 The Match feature makes sense as soon as you start using it: with millions of songs available on Spotify, djay now faces the opposite problem of the old version – how do you find the right song to play next? In my tests, Match was accurate in picking songs that would fit the current mood and style: when I was playing Scholarship by A$AP Rocky, it suggested Juicy J and a track from the GTA V soundtrack (also by A$AP Rocky); for Oasis, it recommended Keane, Feeder, Beady Eye, and The Verve.

The work Algoriddim put in to integrate Spotify in djay is even more impressive when you take a closer look at the music picker and consider the technical aspects of streaming songs inside the app. The Spotify picker feels like a Spotify mini-app embedded inside djay: your playlists and Inbox are updated in real-time as you add songs to them, and a History section allows you to view all your previous DJ sets, rename them, or reload individual songs off of them. By tapping the Spotify button in the main view, sessions can be exported as Spotify playlists or shared with the iOS share sheet, but you can also star and share single tracks without leaving djay.2 In some ways, I actually prefer playing Spotify playlists and albums inside djay than the current Spotify app for iPad.

From a technical standpoint, streaming Spotify in djay required Algoriddim to develop a custom engine capable of starting songs almost immediately and generating waveforms in a couple of seconds. The result is a fast, invisible streaming system that starts playing songs soon after you hit the Play button and that stores track metadata separately, syncing them across devices. 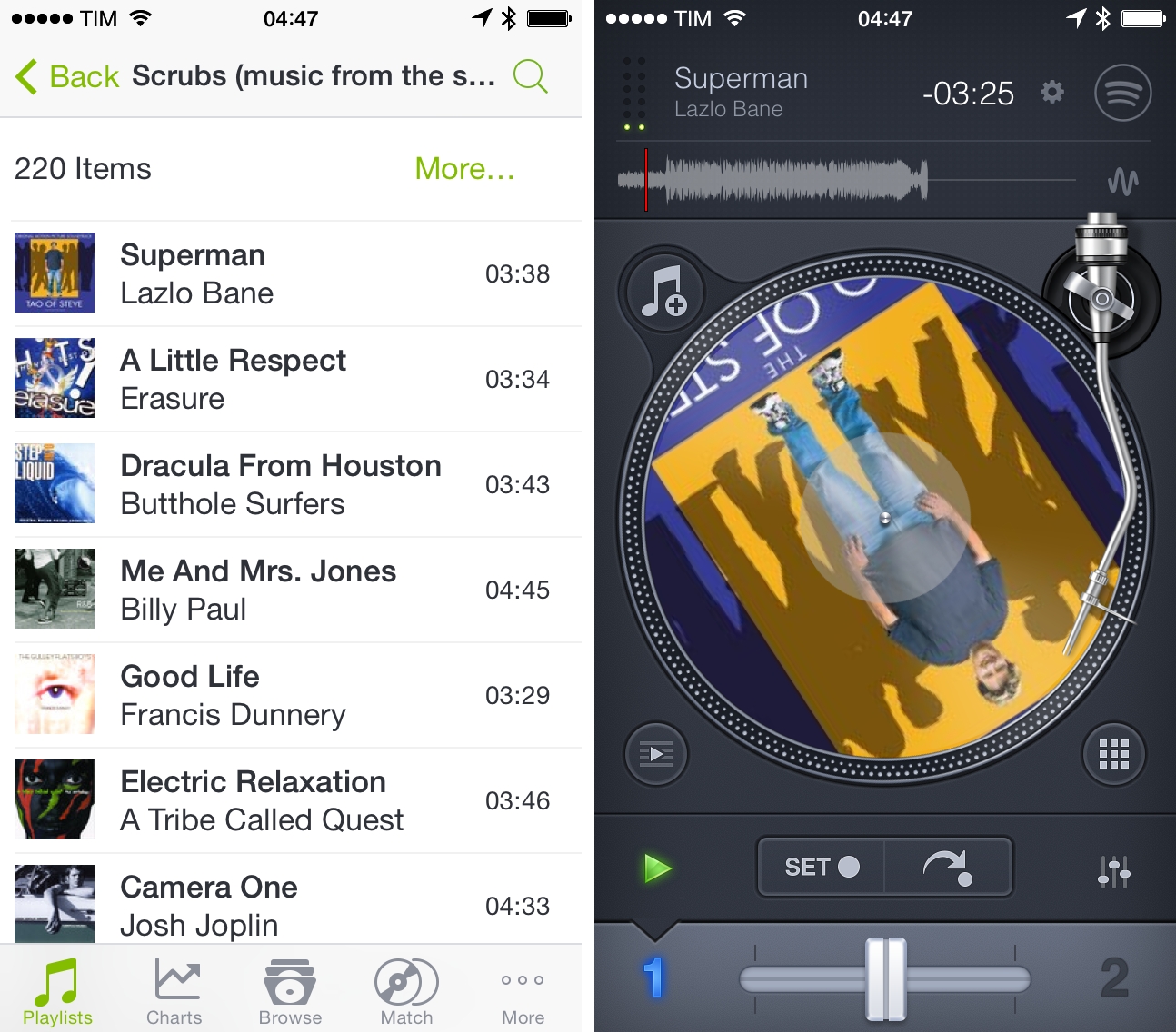 I tested djay both on WiFi and (good) 3G, and Spotify tracks always started playing instantaneously with no delay; as they were starting, a waveform was quickly generated by the app and filled with color highlights. Algoriddim’s co-founder and CEO Karim Morsy told me that they spent a lot of time optimizing Spotify streaming for djay to remove latency and ensure songs could be loaded in their entirety in a matter of seconds – an essential aspect for DJs who often need to jump to specific sections of tracks and need playback that feels offline even though it’s actually been streamed from an online service.

Speaking of cue points and waveforms, these pieces of metadata are stored by djay separately from streamed tracks and, if iCloud is enabled, they will be synced across devices. Waveforms are generated the first time a new song is loaded, so the analysis is only done once; the app won’t treat Spotify tracks any differently than songs from the local library, and you’ll be able to drop multiple cue points and zoom into waveforms as usual.

Aside from new hardware integrations and professional effects available as In-App Purchases, djay’s icing on the Spotify cake is a new Automix Radio mode that automatically finds songs that go well with what is currently playing. Aimed at enabling a lean-back experience for those times when you want to connect djay to your speakers without having to manually interact with the app, Automix Radio works well with Spotify’s large catalogue of songs as it just finds what to play next for you using The Echo Nest’s recommendation technology. Automix Radio features automatic transitions (configurable in the Settings) and it can be disabled at any time to switch back to manual playback management.

djay 2.5 is a fantastic update that makes the app more suitable for the general public thanks to its Spotify integration. djay has always been one of the leading examples of what is possible to achieve on iOS by thinking beyond old PC software metaphors, but it had a considerable barrier to entry caused by its dependance on the local music library. With djay 2.5, Algoriddim has built an impressive streaming engine that retains aspects of local songs and track metadata while giving you access to millions of songs, using automatic recommendations and Automix Radio to remove friction from picking songs and focus on playback and effects.

djay 2.5 is a free update for existing customers; Djay 2.5 for iPad is on sale at $4.99 on the App Store, while the iPhone app is free as a limited-time sale for the week.