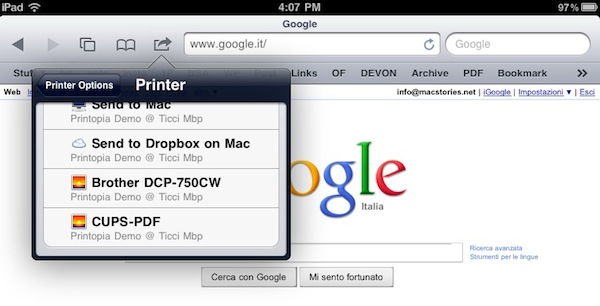 Since Apple removed AirPrint support from OS X 10.6.5 (we’re referring to support for shared printers, which was enabled in earlier 10.6.5 beta versions), many tweaks and apps to re-activate the functionality have surfaced on the internet. We’ve covered some of them, such as the AirPrint Hacktivator, but in my personal experience I’ve found these hacks to be unreliable at best. I’ve tried many of them, and I don’t know why – after some time they just stop working for me. Perhaps my local network isn’t stable enough, perhaps I have issues with 10.6.5. I don’t know. But thing is, these apps and tweaks stop working after a couple of print sessions.

Yesterday I found out about this new app for Mac, Printopia, which the Ecamm developers tout as the simplest way to enable AirPrint for every printer you have configured on your Mac, together with the possibility to print from an iOS device to a local directory on your Mac and Dropbox.

After some initial issues I tweeted about last night, Printopia is finally working for me. My local network still takes a few minutes to print a document from the iPad running iOS 4.2.1 GM to the Mac, but everything’s working now. The devs released an updated build last night which fixes the issues with Dropbox encountered by several users. Also, setting up Printopia literally requires two clicks. 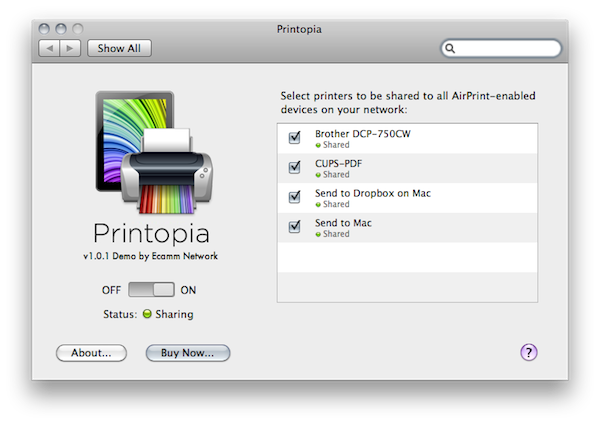 Once you download the .zip package from Printopia’s website, you’ll have to double click on the installer inside it to install the app on your computer. Once installed, you’ll find Printopia in System Preferences. To enable the functionality, just move the slider button to “On”. Printopia will look for printers on your Mac and the Dropbox directory and will share them on your local network. That’s it. From any iOS device, select “Print” and you’ll find the printers from your OS X machine shared through Printopia. Really easy.

I have tested Printopia with my old Brother printer and the print session started after a few seconds. When printing to Dropbox, I had to wait a couple of minutes but the document eventually ended up in Dropbox/Printopia just fine.

You can buy Printopia at $9.95 from the developers’ website, and a 7-day free trial is available. I highly recommend you download the demo to see if the app correctly shares printers on your computer.