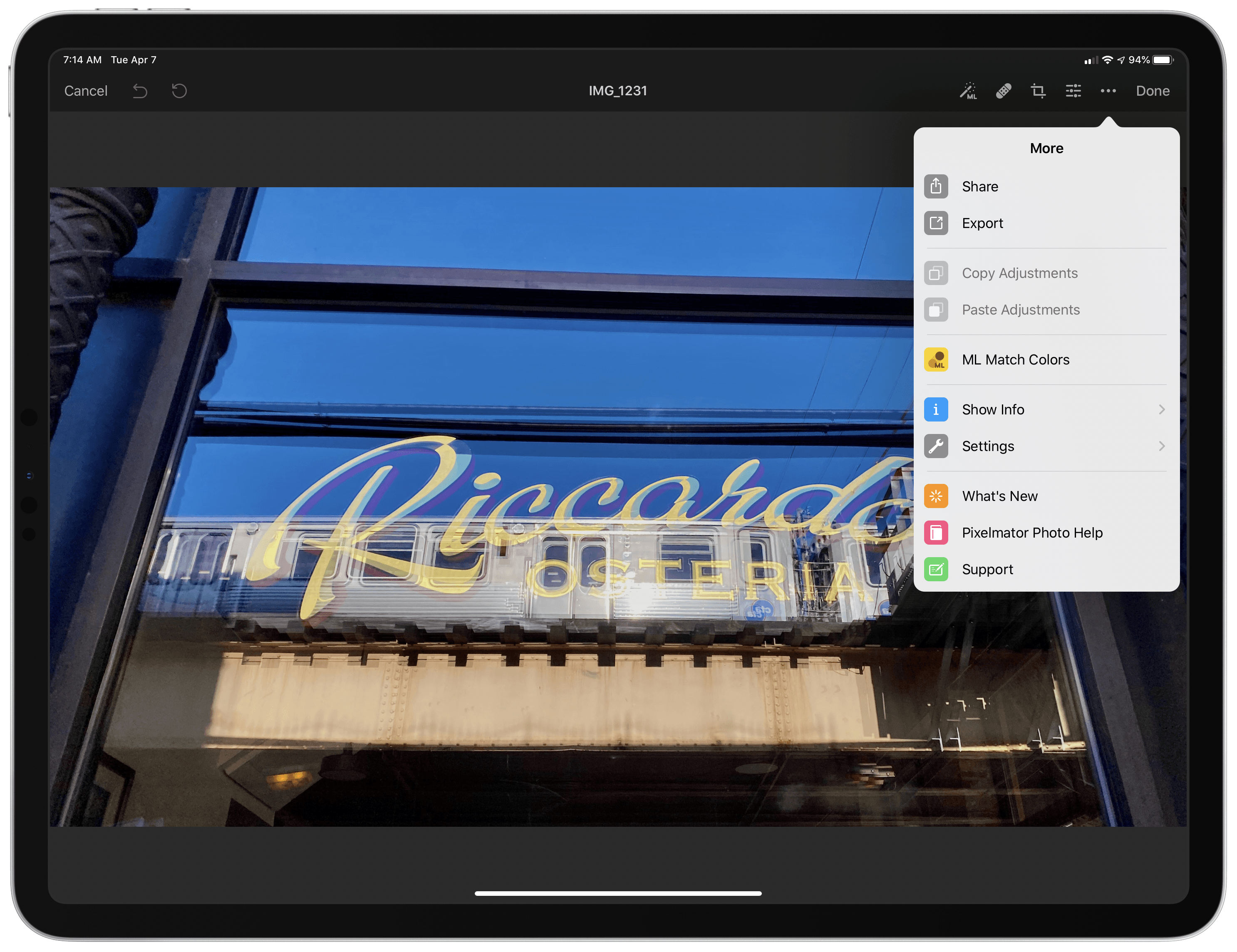 The Pixelmator team has released version 1.2 of Pixelmator Photo for the iPad with iPadOS cursor and Split View support and Pixelmator Pro’s ML Match Colors feature. The update also includes a new way to change the intensity of color and preset adjustments and a ‘Recents’ section for its filter tool. 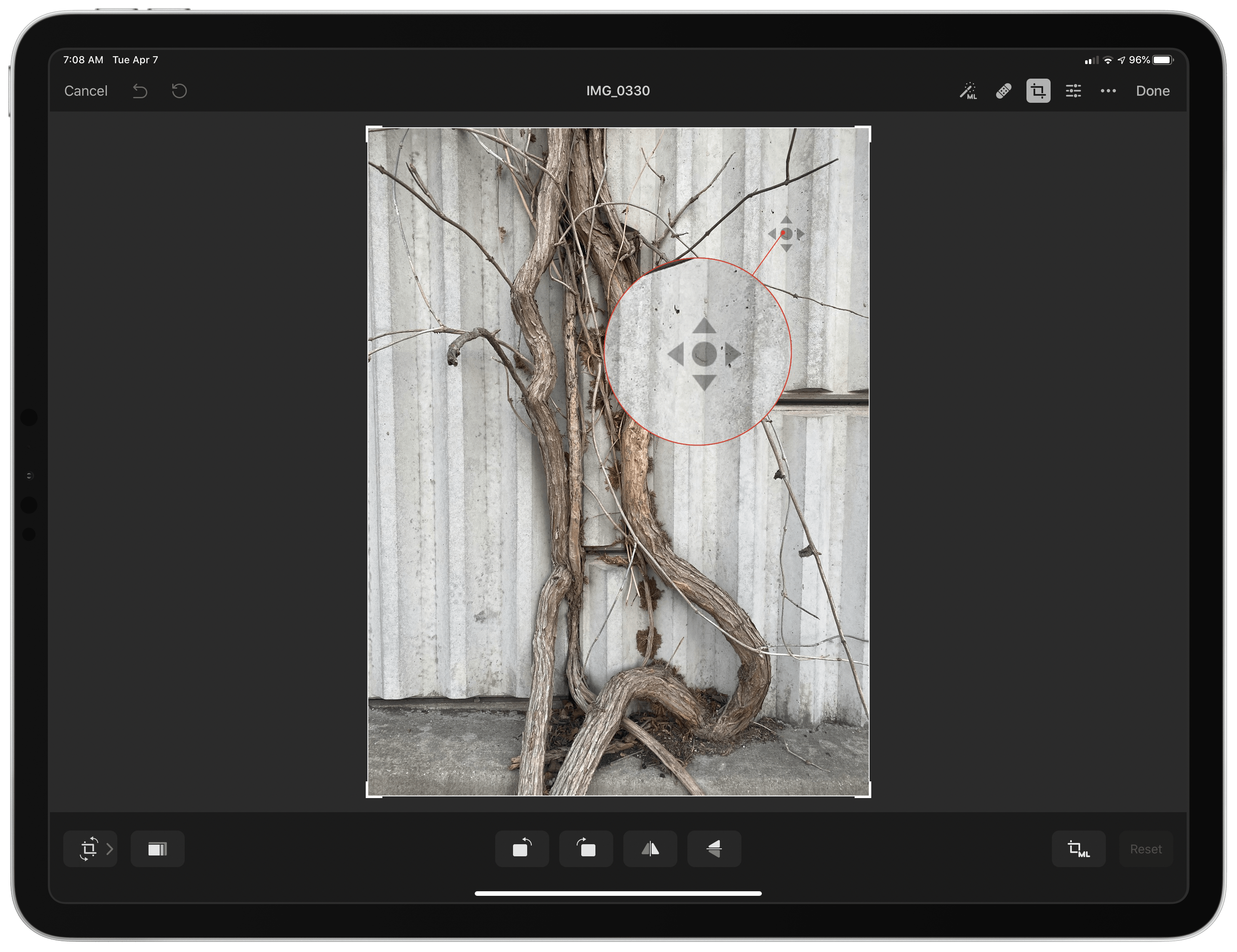 The addition of cursor control is a welcome enhancement to Pixelmator Photo, which already supported keyboard shortcuts. Now it’s possible to make edits to a photo with a combination of the keyboard and either a trackpad or mouse without reaching up to touch the screen. Combined with the addition of Split View, Pixelmator Photo is far more powerful when used in combination with another app than it was before.

For example, when I’m working on an article and want to touch up a photo, I often use Pixelmator Photo to touch up any photos I plan to use. Before the update, if I was doing that with my iPad Pro in a stand, I would usually remove the iPad and edit with it lying flat on a table because it was easier than reaching up repeatedly to navigate Pixelmator Photo’s UI. 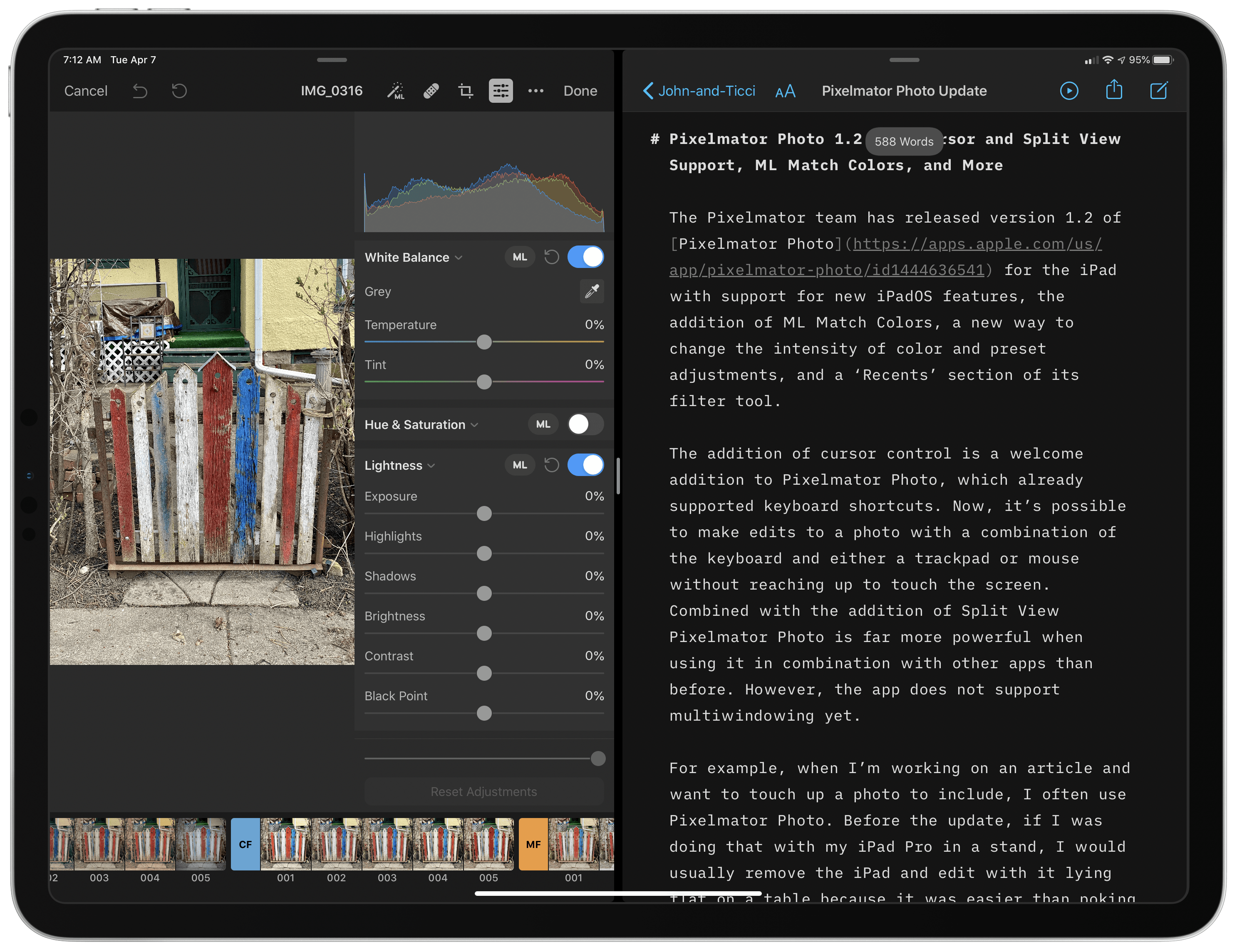 Editing images while I write in iA Writer.

With cursor support, my iPad can remain in the stand while I edit. Better yet, with Split View, I can edit an image alongside the article I’m writing and use the app’s share sheet support to use a shortcut that uploads the final image to our CDN and returns a URL that I can paste into the story. The pairing eliminates the need to switch back and forth between Photos and my text editor, saving time. It’s worth noting that Pixelmator Photo does not support iPadOS’s multiwindowing feature, which I imagine could be valuable in some editing scenarios. 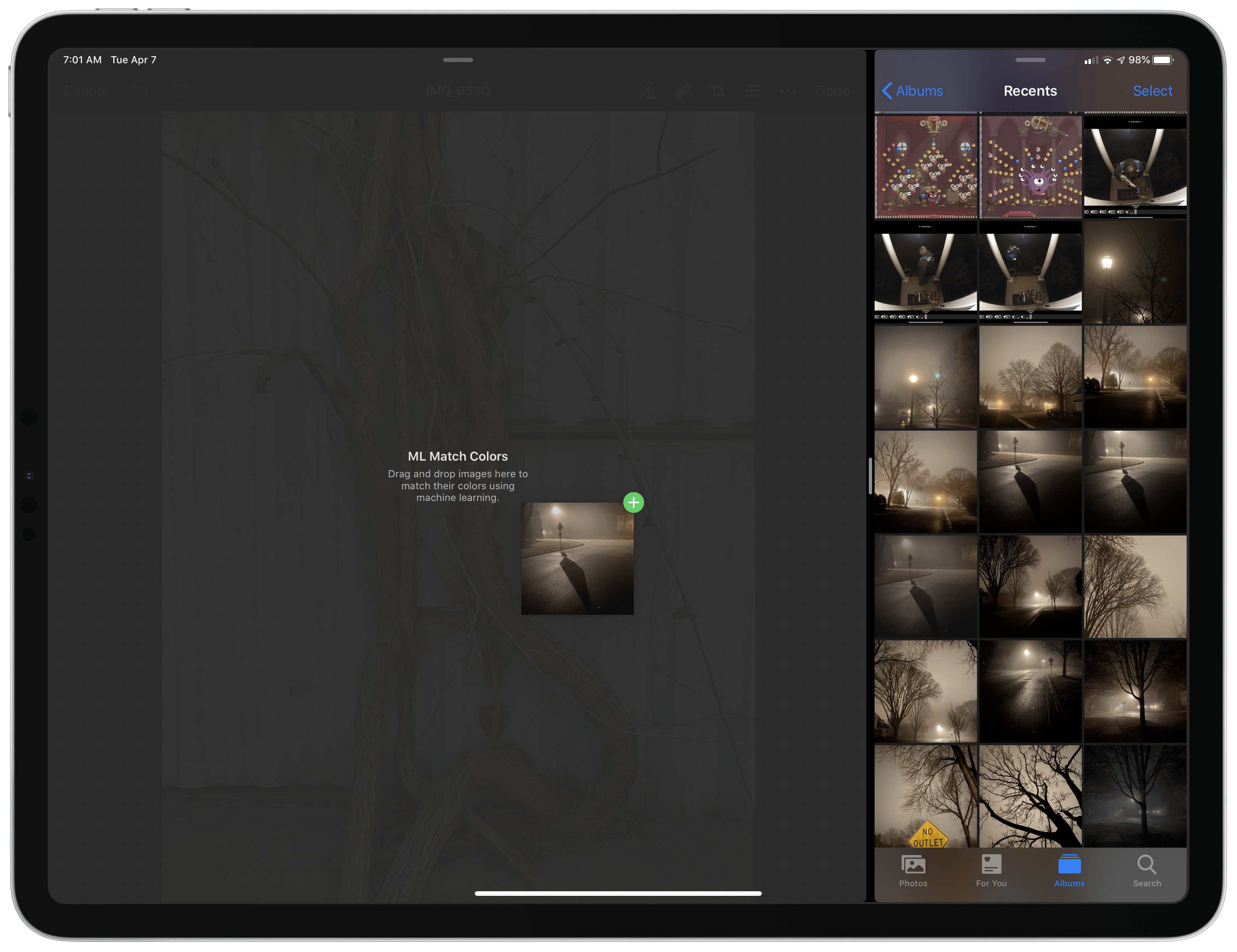 ML Match Colors can be initiated from a Split View when an app is in edit mode in Pixelmator Photo.

Pixelmator Photo has also added ML Match Colors, a feature that debuted on the Mac last year. There are two ways to access the feature. The first is to tap or click on the Edit button in the toolbar, then the ellipsis button, and finally the ML Match Colors button. A popover displaying your iCloud Photo Library appears, and picking an image uses machine learning to apply changes that mimic the look and feel of the image chosen. 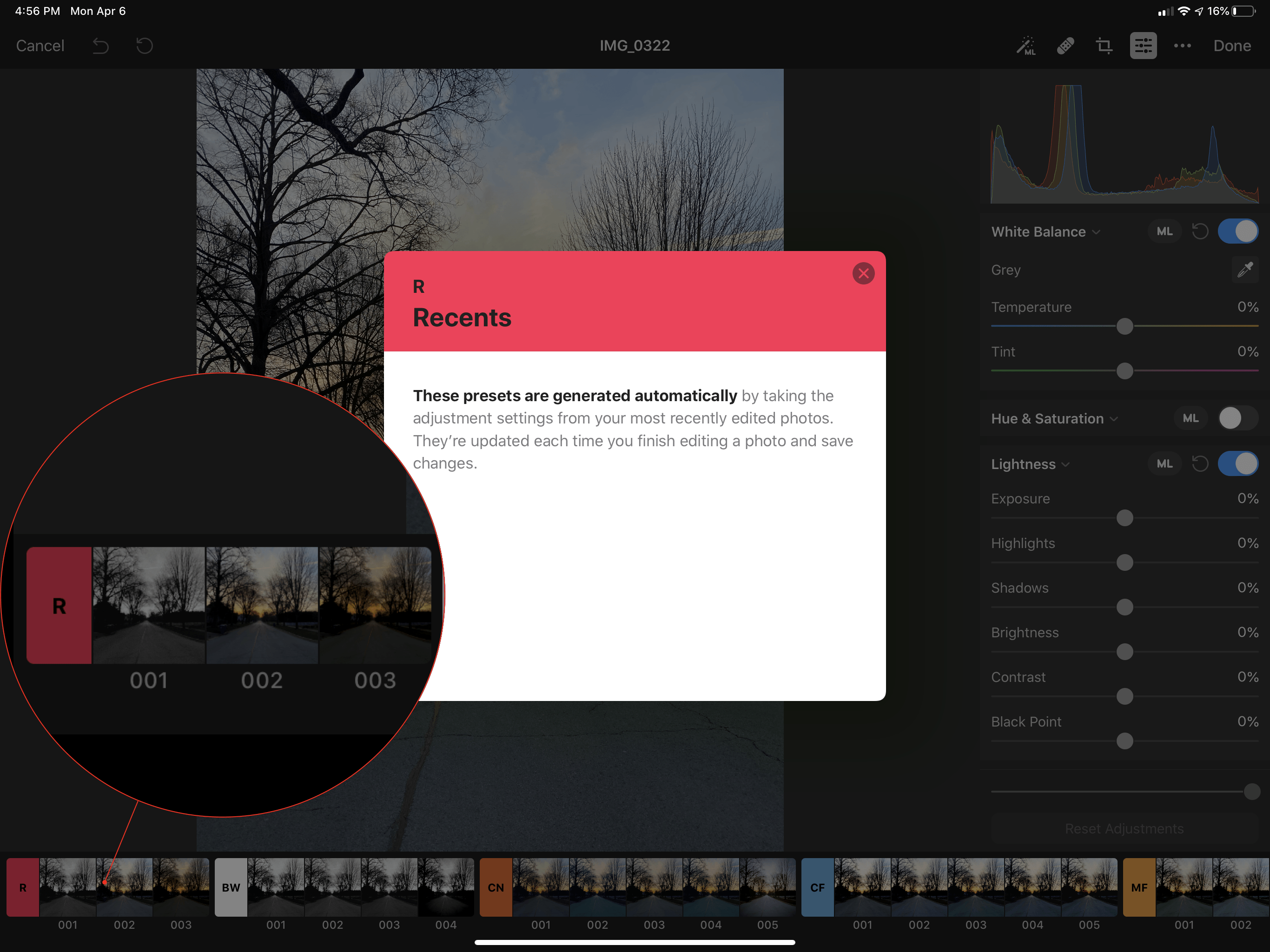 The app also includes a new slider beneath the color adjustments section of the editing panel to change the intensity of color adjustments and presets. A new ‘Recents’ section has been added to the presets strip at the bottom of the screen too. ‘Recents’ collects the settings for the last five images you edited, which allows those edits to be quickly applied to other photos.

I’ve only played around with the new features of Pixelmator Photo 1.2 for a short time, but I already know the new Split View and cursor support will save me time when using the app to edit images for MacStories articles. I have also been impressed with the ease of use and power of ML Match Colors. There are a lot of good photo editors on the App Store. However, few combine the flexibility of access to images through file providers and iCloud Photo Library with Pixelmator Photo’s robust set of tools.

Pixelmator Photo is available on the App Store as a free update for existing users. New users can purchase the app for $4.99.