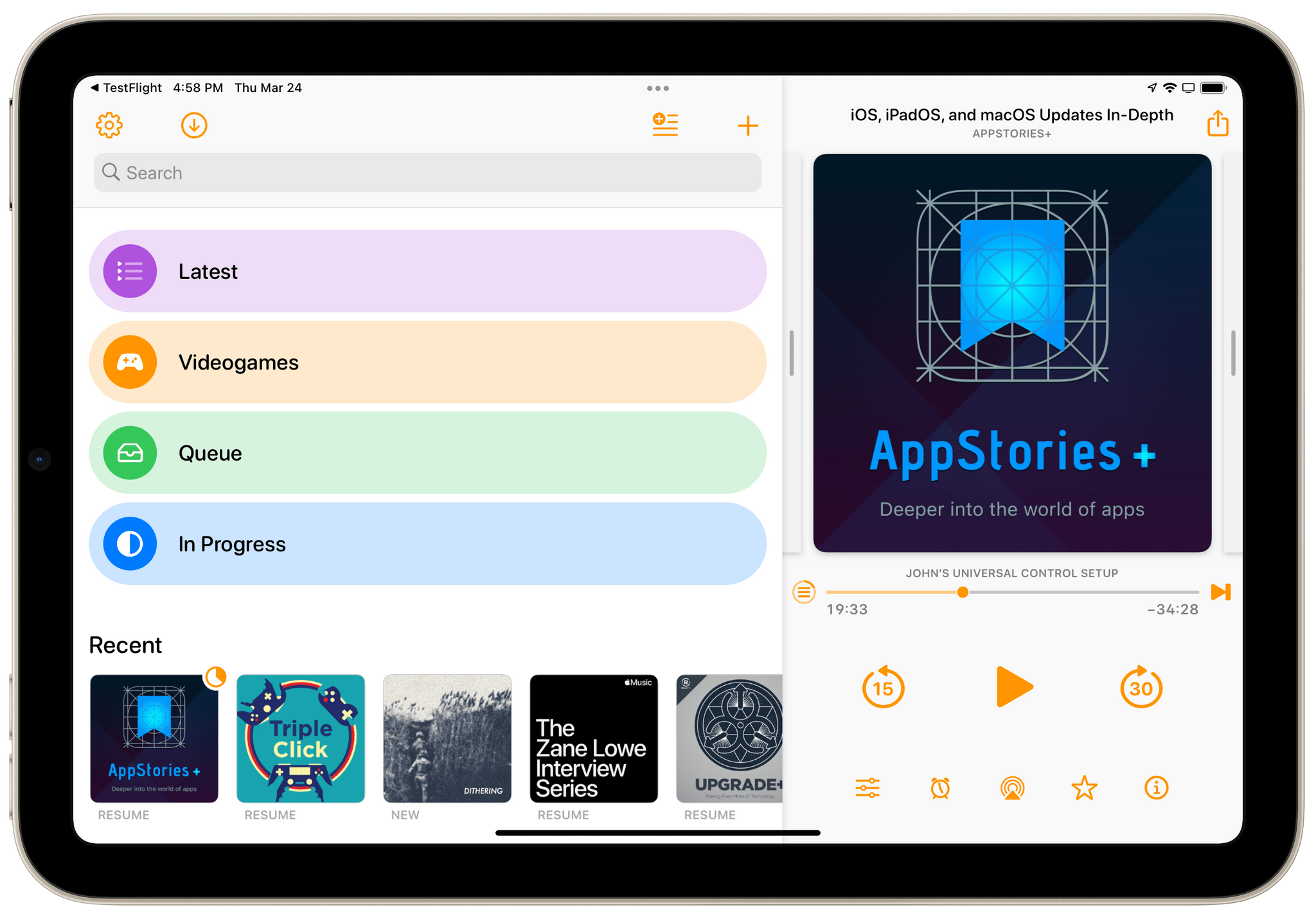 I’ve used a lot of different podcast apps over the years, but the one I return to most often and have used the most is Overcast by Marco Arment. The app’s customizability, Smart Speed and Voice Boost audio enhancement technologies, and Shortcuts support are unrivaled among podcast players. I also appreciate that when episodes of the shows I love are published, they usually appear in Overcast first. 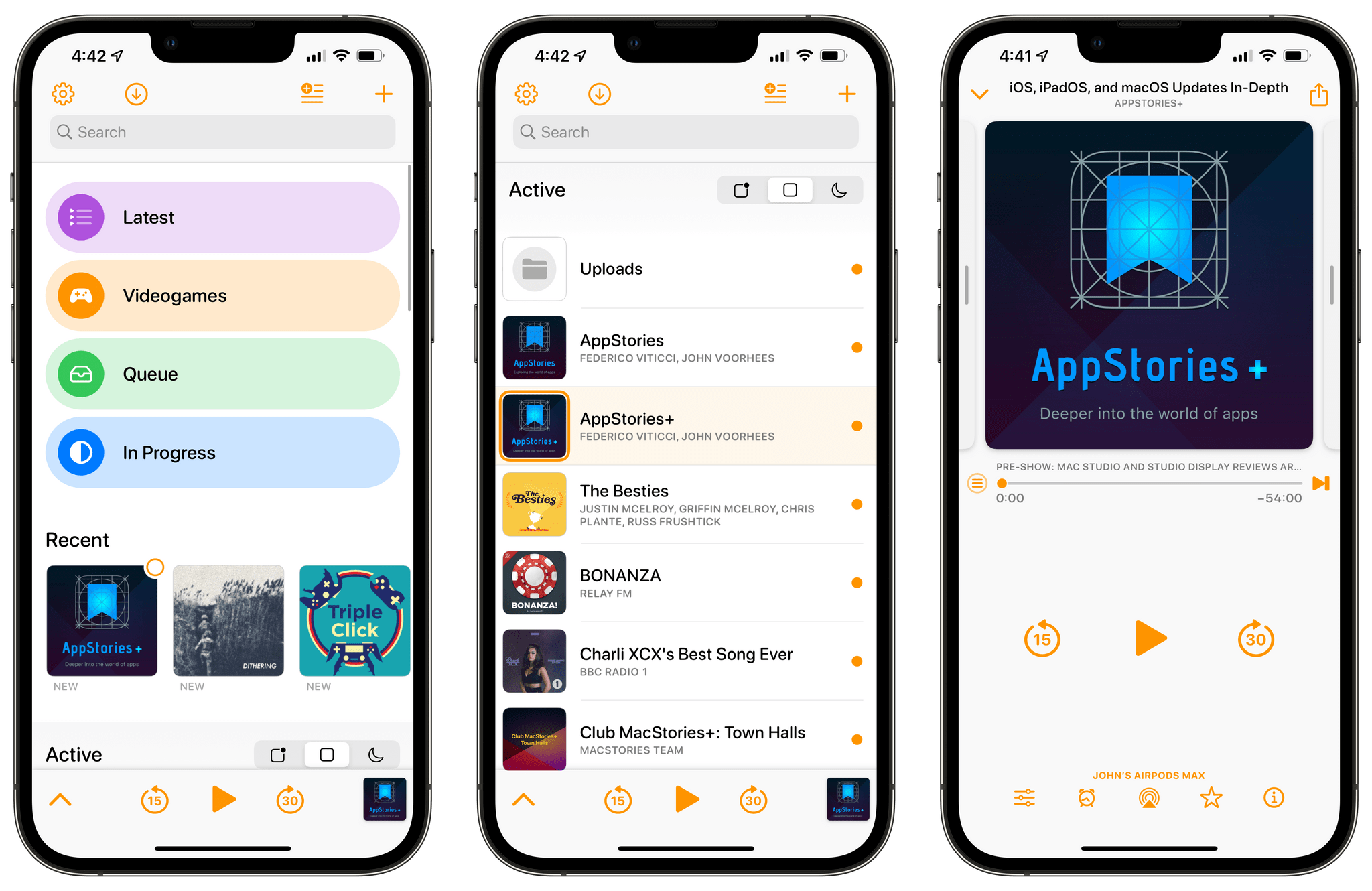 The first thing you’ll notice in version 2022.2 is that the app’s main screen has been divided into three distinct sections. At the top are colorful, customizable buttons for each of your playlists, followed by a horizontally-scrolling list of ‘Recent’ episodes and a filterable list of the shows to which you subscribe.

The top section of this view is new and will include any playlists you created in previous versions of the app. Overcast has a handful of new pre-built playlists that you can add by tapping the ‘Add Playlist’ button in the app’s top toolbar. Pre-built options include Queue, a sort of inbox for episodes you want to listen to next, All Episodes, Starred, Downloaded, and In Progress. 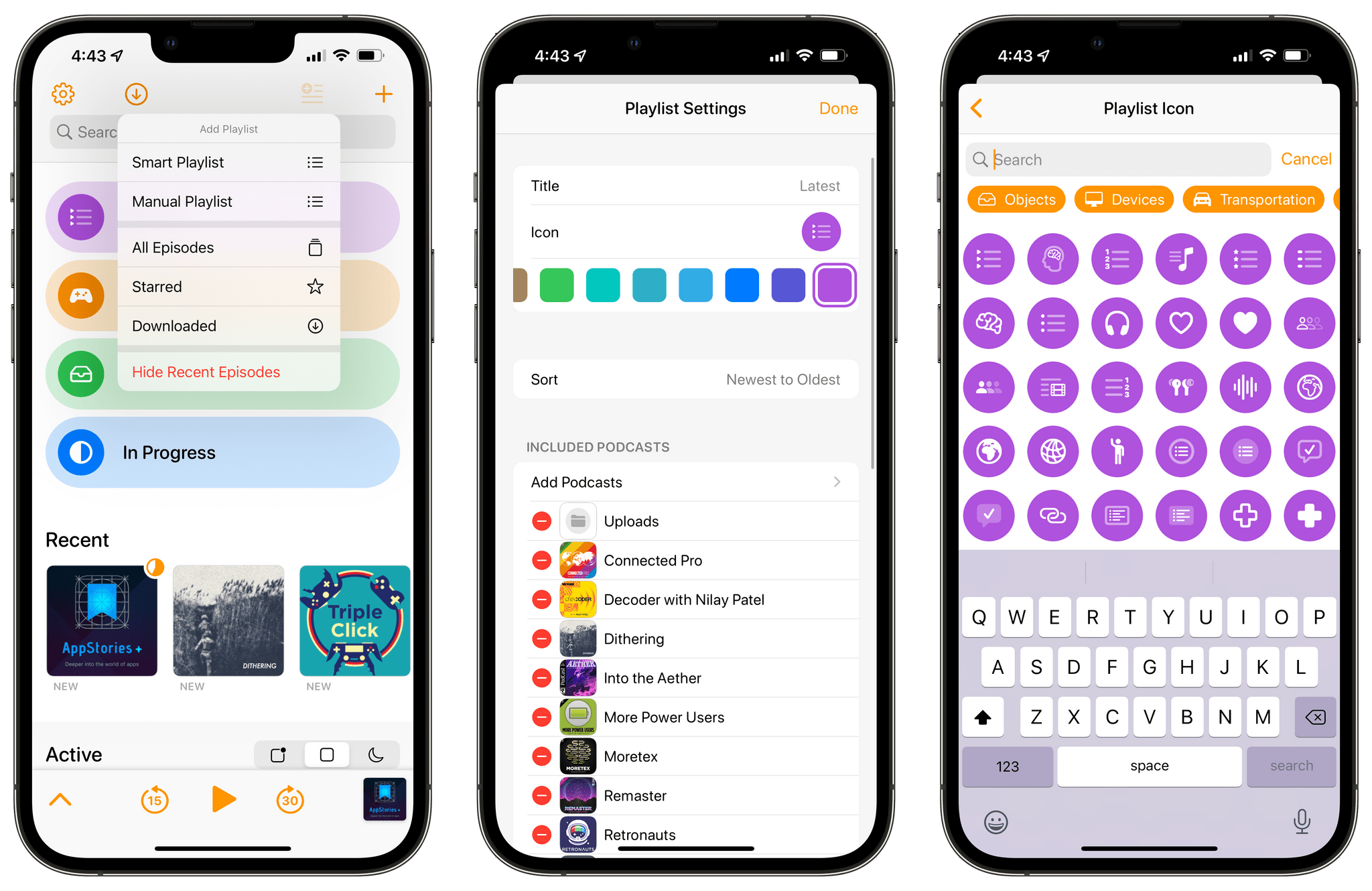 Overcast uses color to allow users to know if there’s anything in their playlists. If a playlist is empty, it’s gray. If the playlist has at least one episode in it, the playlist’s button turns a bright color. Those colors, along with the icons used for each playlist, can be modified by tapping on the playlist and then picking Edit → Playlist Settings. From here, you can adjust the color, icon, title, sorting, and included podcasts for a playlist.

The vibrant color choices and use of SF Symbols give this section a modern, fun feel. Also, the built-in playlists cover options that will satisfy the needs of many users who don’t want or need to build their own.

I’ve added the In Progress playlist that makes it easy to pick up where I left off with episodes I’ve started. I also added a Queue playlist because, in recent years, I’ve found that I listen to every episode of fewer shows than I used to. Having a Queue playlist where I can drop episodes that look interesting has been a handy way to organize my listening. The ‘Latest’ and ‘Videogames’ playlists are ones that carried over from the last version of Overcast, collecting the most recent episode of my favorite shows and organizing my favorite videogame podcasts in one place. 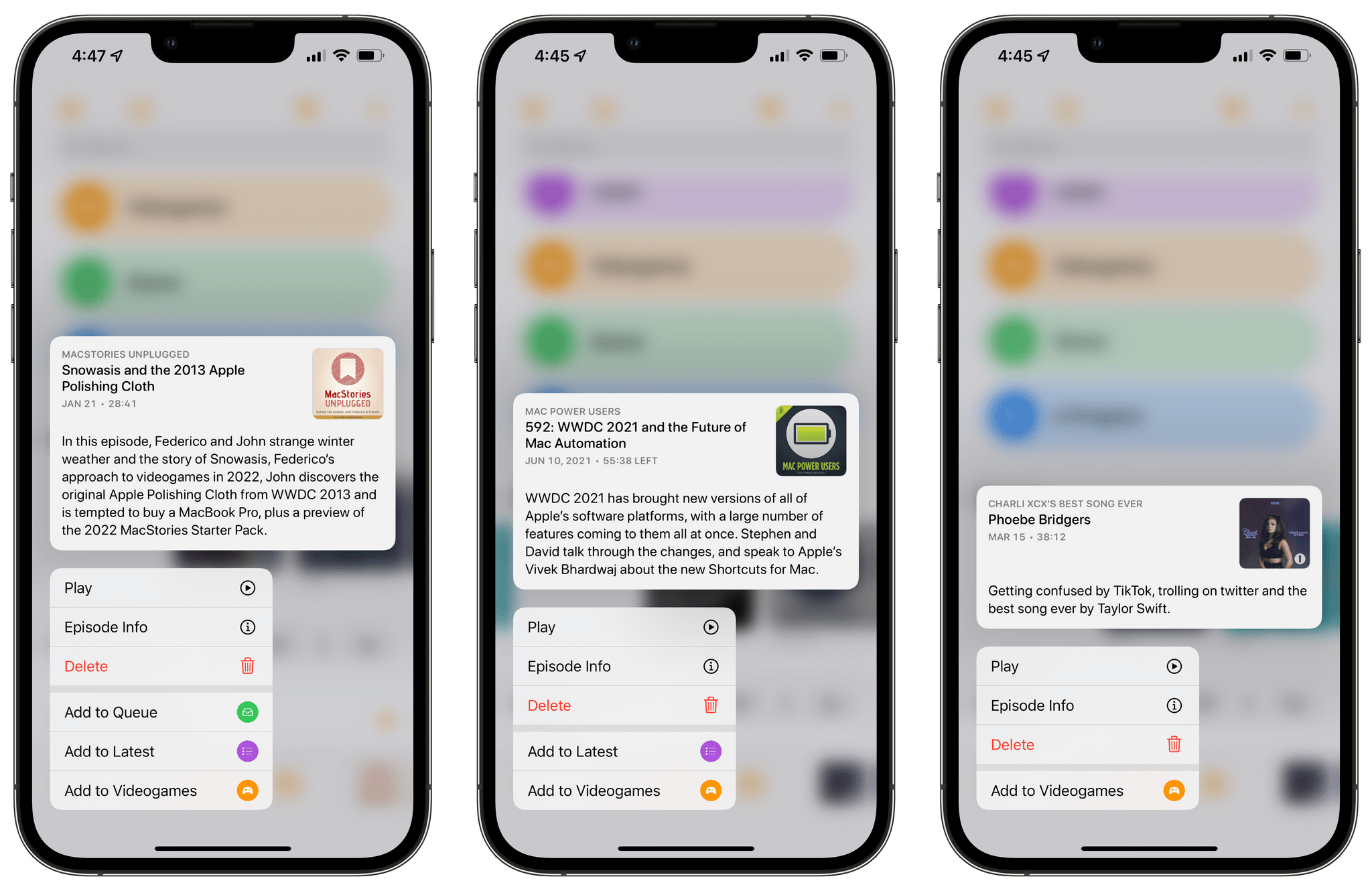 The options when you long-press artwork in Overcast’s Recent section.

The Recent section is a running list of the most recent episodes of the shows to which you subscribe. Each episode is represented by its thumbnail art and labeled as ‘New’ or ‘Resume,’ for those episodes you’ve already started. I particularly like that when the artwork is tapped, the episode starts playing immediately. I also like that long-pressing a Recents shows a summary of the episode and options to play it, view its show notes, delete it, or add it to one of your playlists.

The combination of Recent episodes and my Queue playlist has become the way I manage most of the shows I listen to. If I want to start an episode now, I just tap its artwork in the Recent section. Otherwise, I long-press the artwork and send the episode to my Queue. 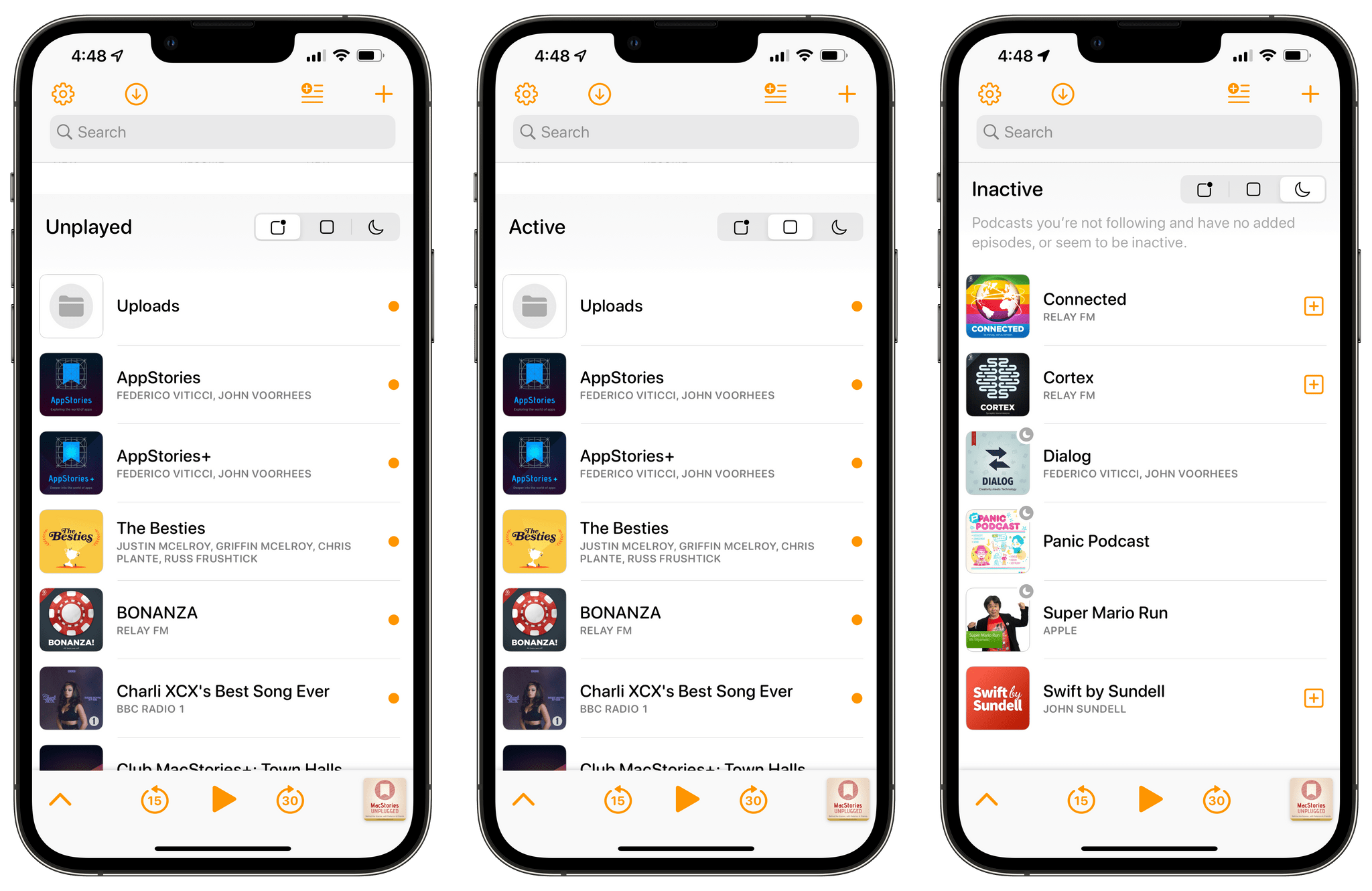 The final section is a list by podcast of episodes you’ve downloaded and shows to which you’ve subscribed. At the top is a segmented control to filter the list by Unplayed, Active, and Inactive. This isn’t a feature I’ve explored much because I’m more interested in finding unplayed episodes than whether they’re active or inactive, but you’ve got those options if you want to sort your podcasts that way.

The inactive list is worth explaining, though, because it wasn’t entirely clear to me how it worked when I first tried it. What threw me off is that in addition to a handful of shows that I knew hadn’t published an episode for a very long time, my inactive list included shows like Relay FM’s Connected, which published an episode a couple of days ago. The reason is that Overcast’s inactive list combines shows that haven’t published an episode recently with those that you no longer follow and where you manually deleted all episodes from your library, which is why Connected showed up. Months (probably years?) ago, I subscribed to the Relay membership version of Connected, unsubscribed to the ad-supported version, and deleted old episodes. I suppose this is a way to easily revisit shows that you don’t subscribe to but sometimes download episodes of, but I think it’s likely to confuse some users because of the way it combines inactivity from both a show and user perspective into one list. 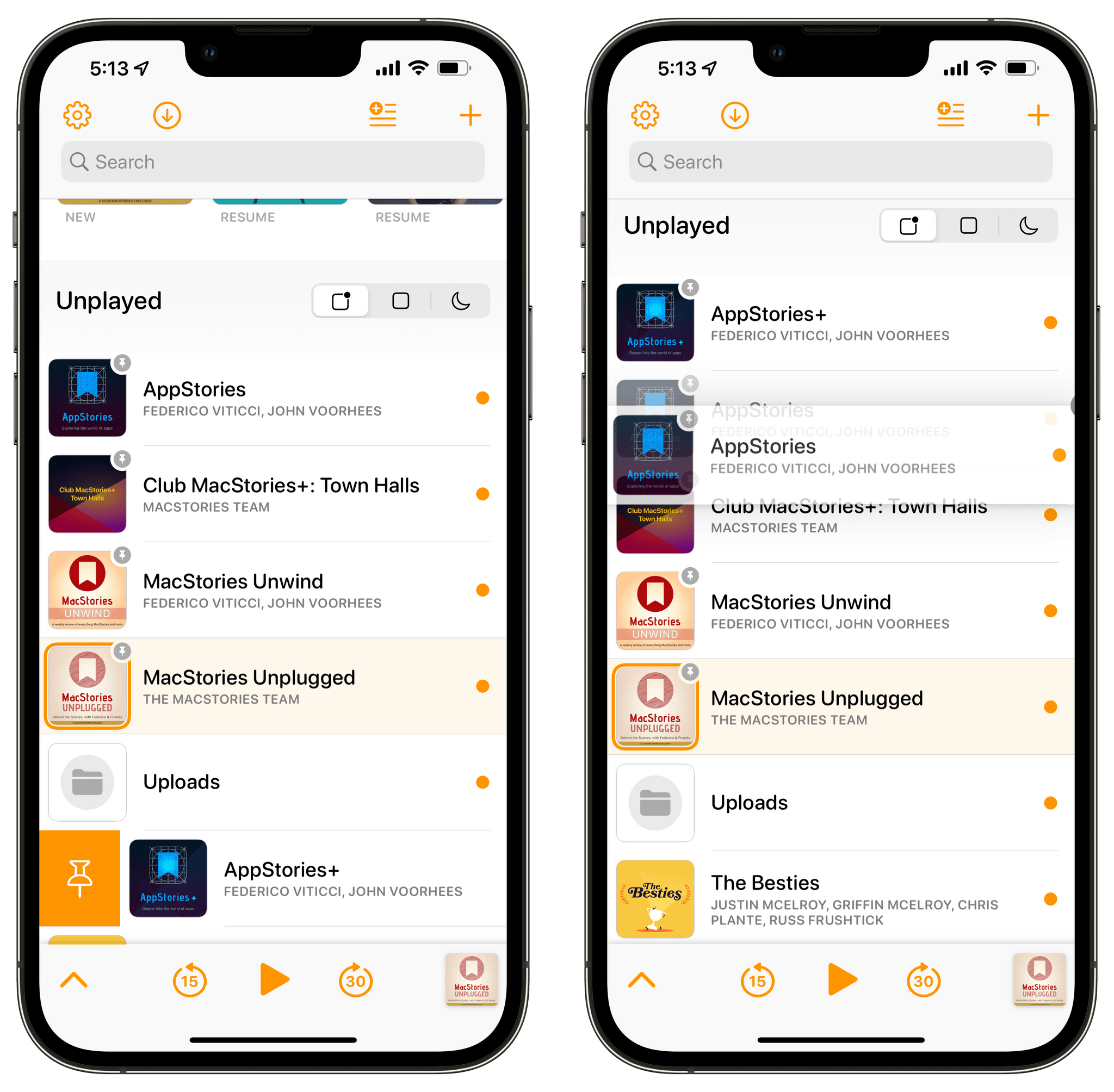 I pin the MacStories shows to the top of my list to make it easier to check if they were properly published.

Shows in this last section of Overcast’s main screen can also be pinned to the top of the list, which is handy if you subscribe to a lot of shows but want easier access to a limited number of them. Drag and drop reordering is available in more places of the app, too, including the playlists at the top of the main screen and any shows you’ve pinned in the app’s main view. There’s also a menu button that’s revealed when you tap on a show’s episode list that has added options to Play Next or Play Last, which is similar to Apple Music, Download, Re-Download, and Delete Download. From here, you can also add an episode to one of your playlists and mark it as played with a left to right swipe on an episode. Marco has said in Overcast’s TestFlight notes that the app also handles very large collections and playlists of podcasts better than in the past, which isn’t something I’ve tested because the number of shows I subscribe to and episodes I keep on my devices is limited.

My understanding is that today’s update is the first part of a phased redesign of Overcast, which bodes well for the app’s future but also has left other parts of the app feeling a little dated. Still, I love the direction in which Overcast is heading and look forward to seeing what’s planned for the rest of the app. The app is still highly customizable, but features like Recents and the built-in playlists make it more welcoming to newcomers and users with simple needs than ever before. Coupled with the app’s excellent audio engine, Overcast remains my favorite way to listen to podcasts.

Overcast 2022.2 is available on the App Store as a free update. Subscribing to Overcast Premium for $9.99/year removes banner ads from the app’s playback screens and lets users upload their own audio files.