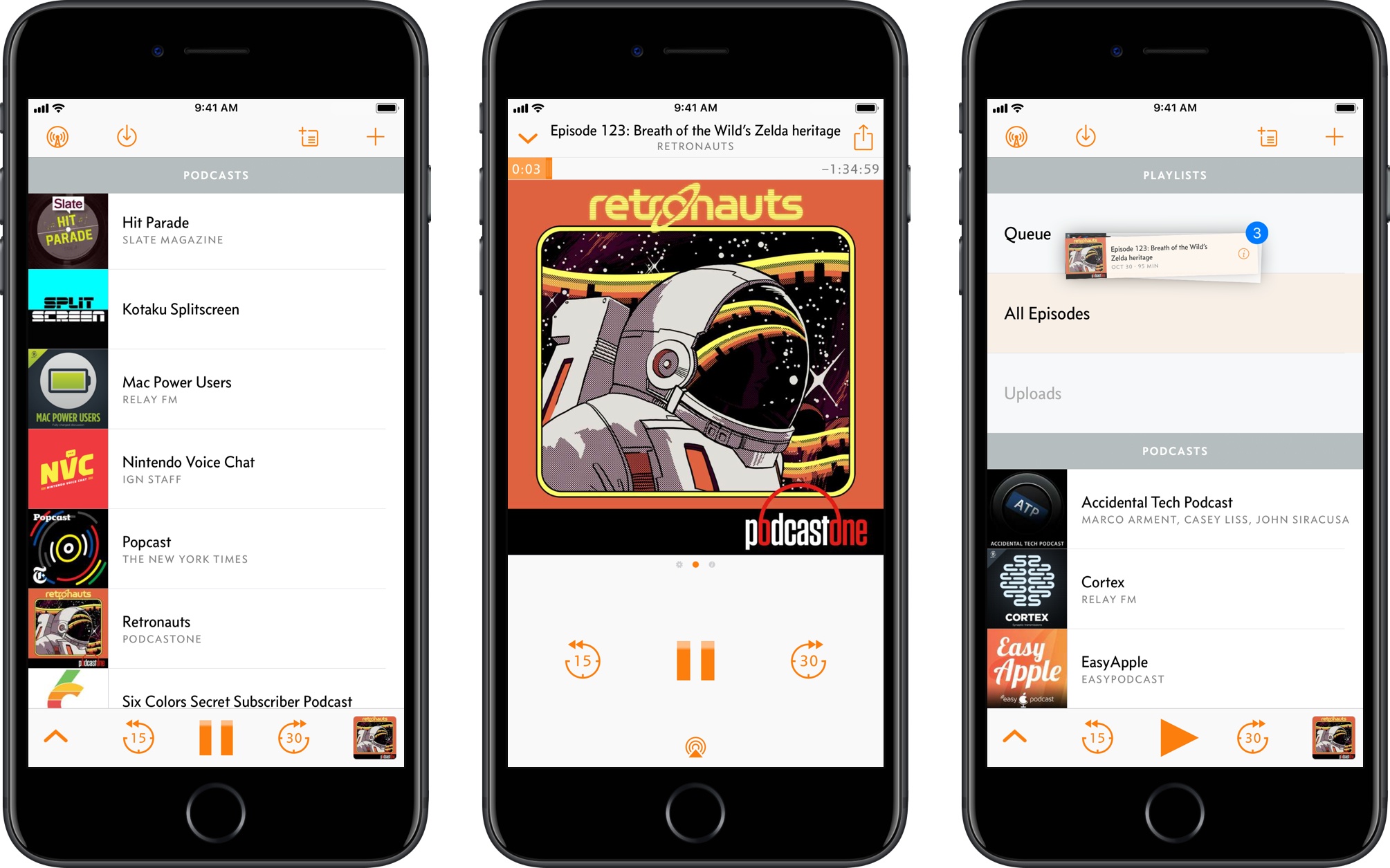 The combination of iOS 11 and iPhone X is pushing developers to reconsider many of their interaction paradigms and interface affordances that predated the Super Retina display and drag and drop. In a span of two months, iOS 11 made custom implementations of multiple item selection and reordering effectively obsolete, while the iPhone X now requires apps to embrace its display and novel status bar design.

Overcast 4.0 is a good example of how Apple’s biggest releases of the year impacted apps that needed a lot of work to be updated for the iPhone X and iOS 11. Released today on the App Store, Overcast 4.0 bears no groundbreaking additions to the experience; instead, developer Marco Arment focused on design refinements and simplifying the app’s navigation, modernizing Overcast’s appearance and flow while bringing smaller enhancements to the listening and browsing experience.

There are some notable changes in this version – drag and drop is present, albeit in a limited fashion – but Overcast 4.0 is primarily aimed at foundational improvements and laying the groundwork for the future. Despite this “Snow Leopard approach”, however, heavy Overcast users should still find the many optimizations as well as the “by popular demand” tweaks more than welcome.

The most visible departure from Overcast 3.0 is the replacement of the “stacked card” visual metaphor (of which I was a fan) with a more traditional horizontal navigation. Show pages and episode details are now always pushed into view from the side of the app; the Now Playing screen has gone back to the Overcast 2.0 style, abandoning the Apple Music-inspired card design of version 3.0. 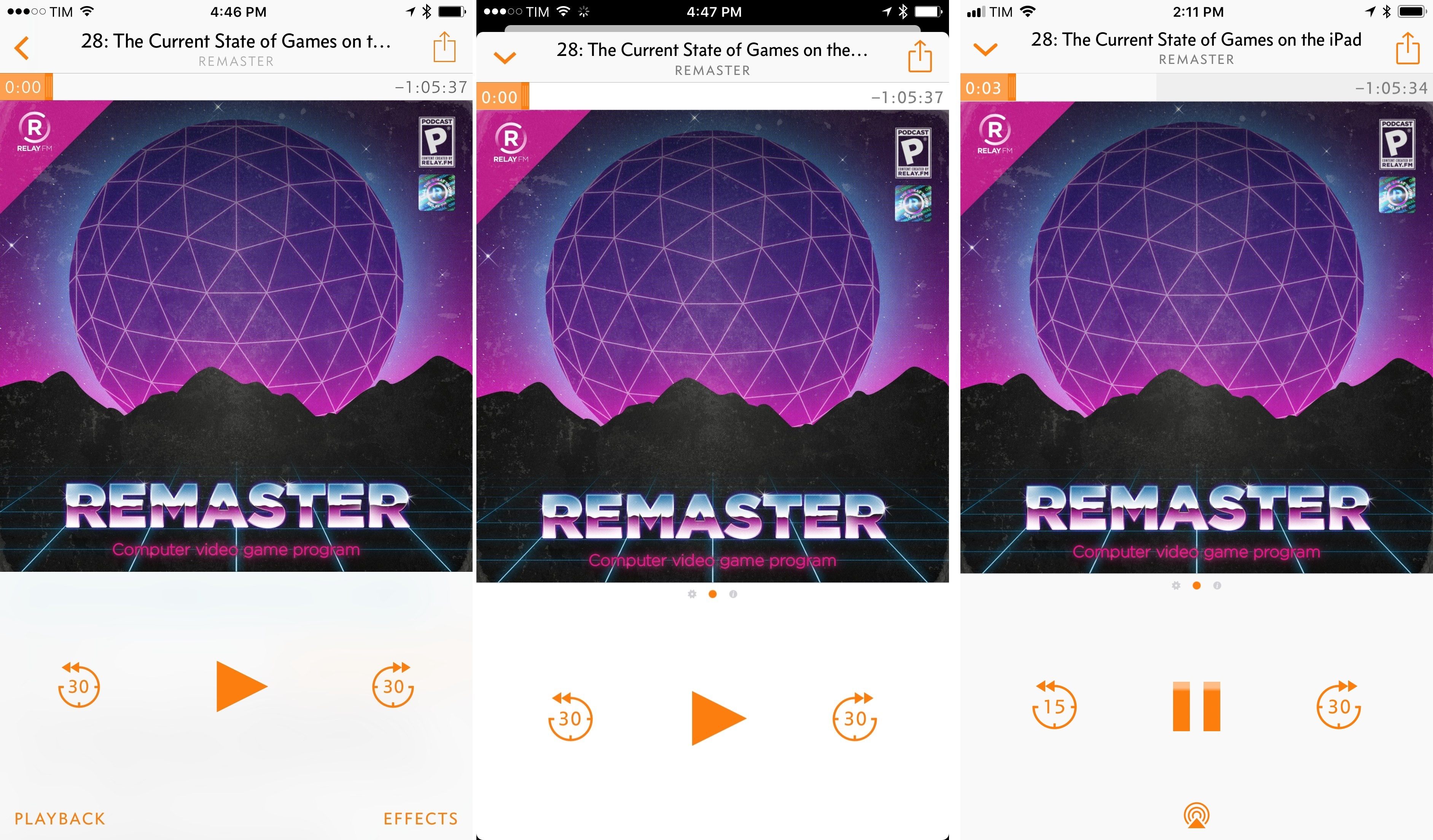 According to Arment, these were necessary changes to take advantage of the iPhone X’s screen and increase the reachability of all navigation controls throughout the app. It’s hard to tell without an iPhone X in my hands, but I assume that “embracing the notch” with a unified title bar should look better than blocking out the device’s status bar with a black background, which Overcast’s old stacked card UI (pictured in the image above) would have done.

There are plenty of design tweaks in Overcast 4.0 that are relatively small in isolation, but add to the experience over time. An episode’s description page now features a play button in the center of the title bar, which makes it easy to start listening without navigating back to the episode list. The Now Playing widget at the bottom of the screen has been slightly redesigned with the inclusion of a chevron that suggests the UI element can be swiped or tapped to open vertically. Swipe gestures on individual episodes use the new full-swipe iOS 11 API to play a subtle tap via the Taptic Engine when you swipe all the way across the cell to delete or download an episode. 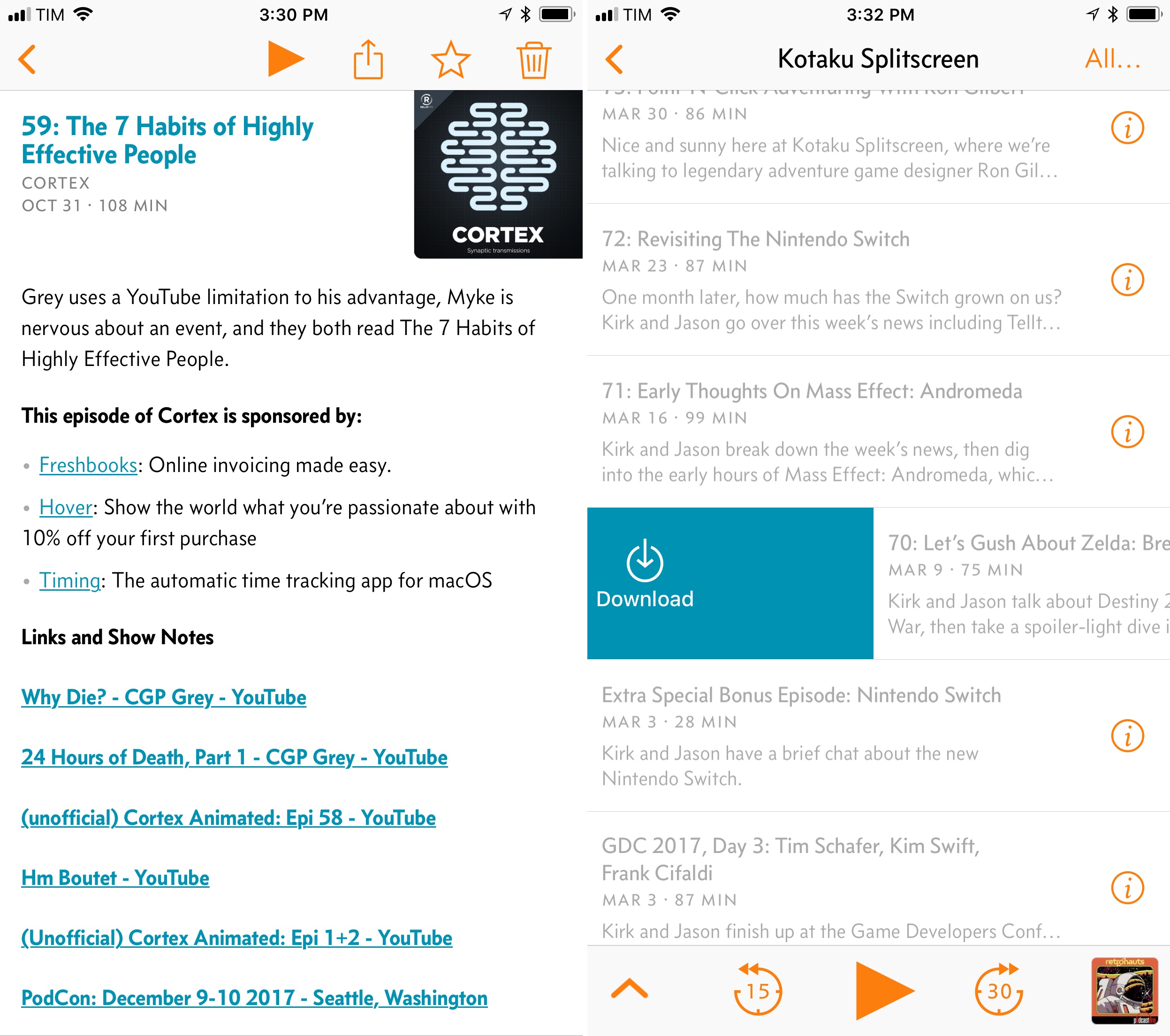 Some of the UI tweaks in Overcast 4.0.

There are dozens of other small optimizations in Overcast, but there are also a couple of new features worth pointing out. In the Nitpicky Details screen in Settings, those who don’t like Overcast’s “episode bar” can turn on a One-Tap Play option that immediately plays an episode in a list when tapped, instead of expanding it to reveal contextual actions. When this setting is enabled, the bar can be opened by tapping a downward-facing arrow on the right side of an episode. 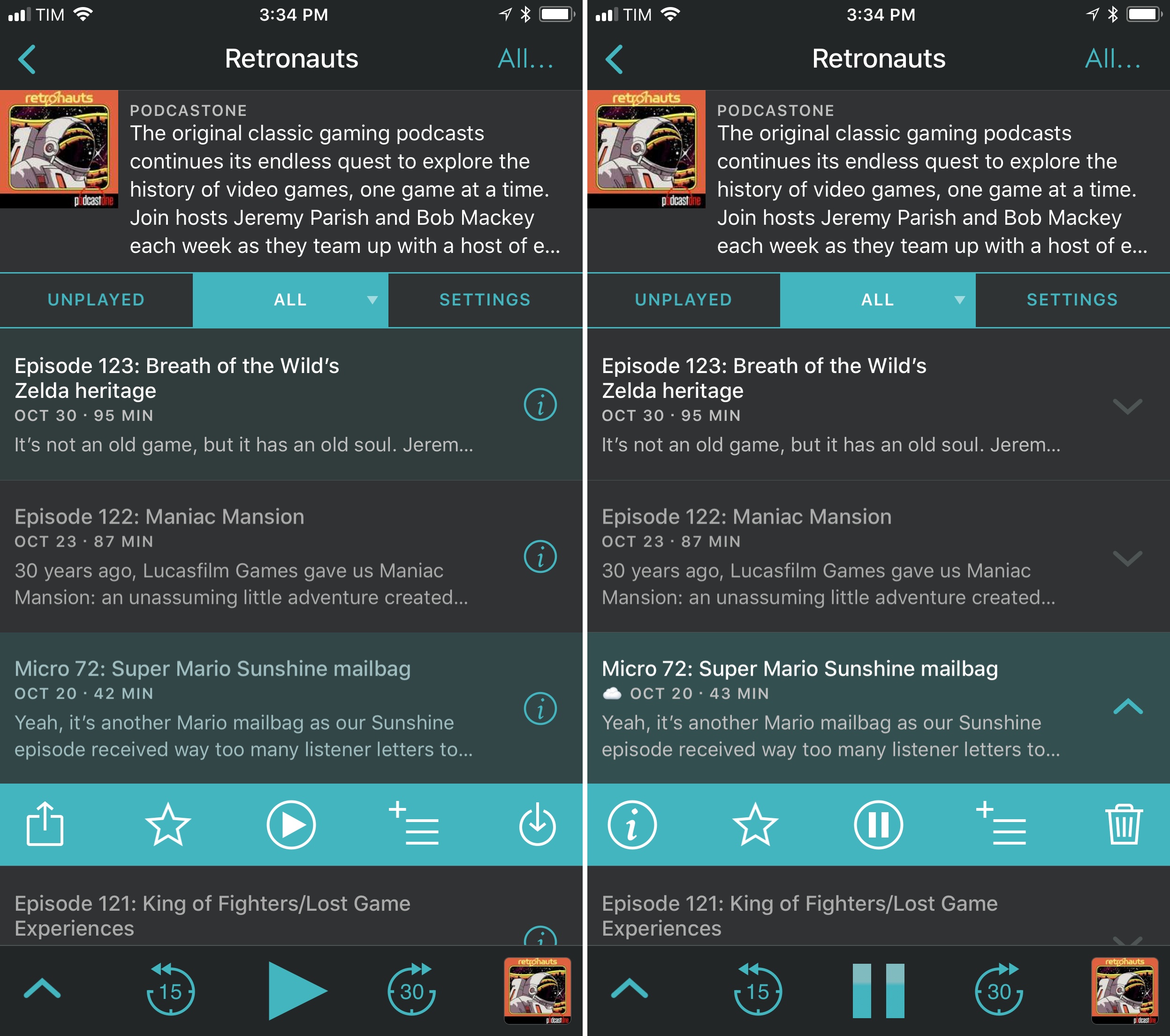 When One-Tap Play is enabled (right) the info button replaces the share button in the episode bar.

I don’t use One-Tap Play (I listen to podcasts in Overcast by adding them to a catch-all Queue playlist, so having easier access to the bar is more convenient for me), but I know that thousands of users prefer this behavior. It makes sense to make it a Nitpicky Detail in the app for those who want it.

The biggest feature addition to Overcast 4.0 is drag and drop to reorder episodes in a playlist. Thanks to iOS 11’s drag and drop framework, Arment has been able to replace his old custom implementation of episode reordering and adopt a system-wide behavior that is consistent with other iOS 11 apps. On both the iPhone and iPad, you can hold down on an episode in a playlist to lift it up and drop it elsewhere in the current playlist or in another playlist altogether. Native drag and drop means Overcast benefits from all the options Apple baked into the framework: you can pick up multiple episodes at once with multi-select; dragging doesn’t block interactions with the rest of the interface (so you can tap around and open other playlists as you’re holding an episode); and, on the iPad, you can even drag an episode out of Overcast and drop it in another app (this will export the episode title and URL). 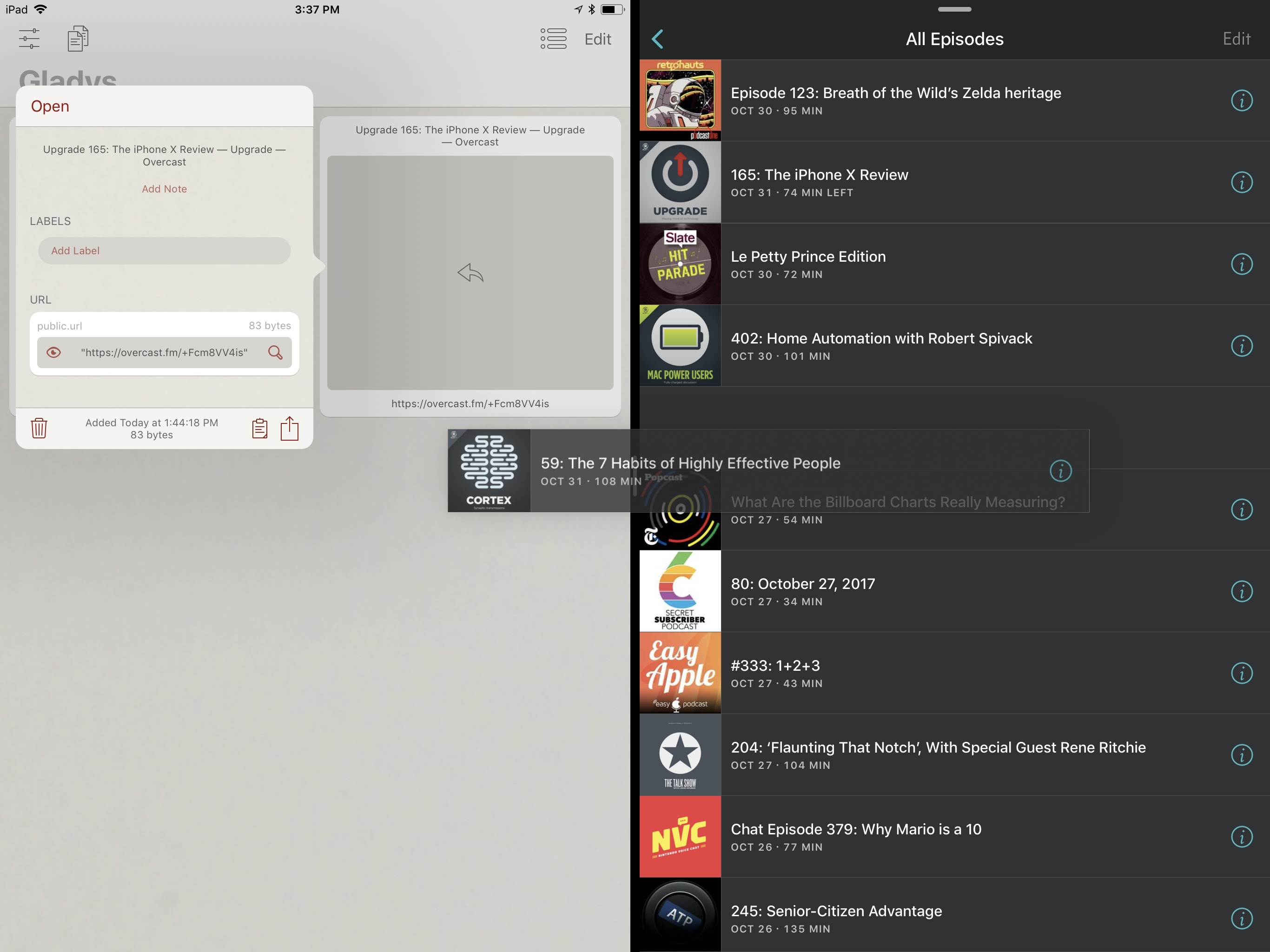 Dropping an Overcast episode into Gladys for iPad.

As someone who likes Castro’s triage-based system but prefers Overcast’s audio experience, I find drag and drop support in Overcast particularly effective. In my Queue playlist, I can quickly reorder episodes based on what I want to play next, and I can also pick up multiple episodes at once from the All Episodes list and drop them into the Queue without having to tap the ‘Add’ button multiple times in a row.

Unfortunately, as also mentioned in Overcast’s release notes, support for drag and drop is extremely basic at this point, especially when compared to a rich implementation of the technology such as Supertop’s. There’s no haptic feedback when reordering episodes, and no custom item previews for in-progress drags; Overcast doesn’t visually communicate drop areas with UI highlights (something that Castro does well with its queue), and the app doesn’t support spring-loading either. And more importantly, you cannot pick up episodes from every screen in Overcast: right now, only episodes inside playlists support drag and drop. However, Arment is promising “more coming later” for drag and drop in Overcast, which suggests the app’s new foundation should unlock more advanced uses of the feature in the months ahead.

Speaking of drag and drop, Overcast 4.0 turns off 3D Touch by default to avoid possible interference with the long-tap gesture to start dragging episodes. Personally, I never had this kind of problem, but I understand why the difference between a normal long-tap and a 3D Touch press requires fine motor skills that can be an issue for many. There’s a Nitpicky Detail to re-enable 3D Touch to open an episode’s info; I’ve kept it disabled for now as Overcast prominently features an info button to quickly open show notes next to an episode’s title.

Overcast 4.0 may not have a splashy new design or major feature changes, but I believe Arment made a good call in rewriting the app’s UI for iOS 11 and the iPhone X and focusing on refinements and overall polish for now. I’d rather have Overcast look great on my iPhone X this weekend than wait for months and use it in letterboxed mode.

Overcast’s audio experience continues to be unparalleled (I’ve tried other clients’ versions of Smart Speed; they don’t sound nearly as good as Overcast’s) and it feels like, after months of work, Arment has a better foundation to build upon. As I suspected, after my annual stint with Apple’s Podcasts app, Overcast is back on my Home screen, and I’m excited to see where Arment will take it next.

Overcast 4.0 is available on the App Store.