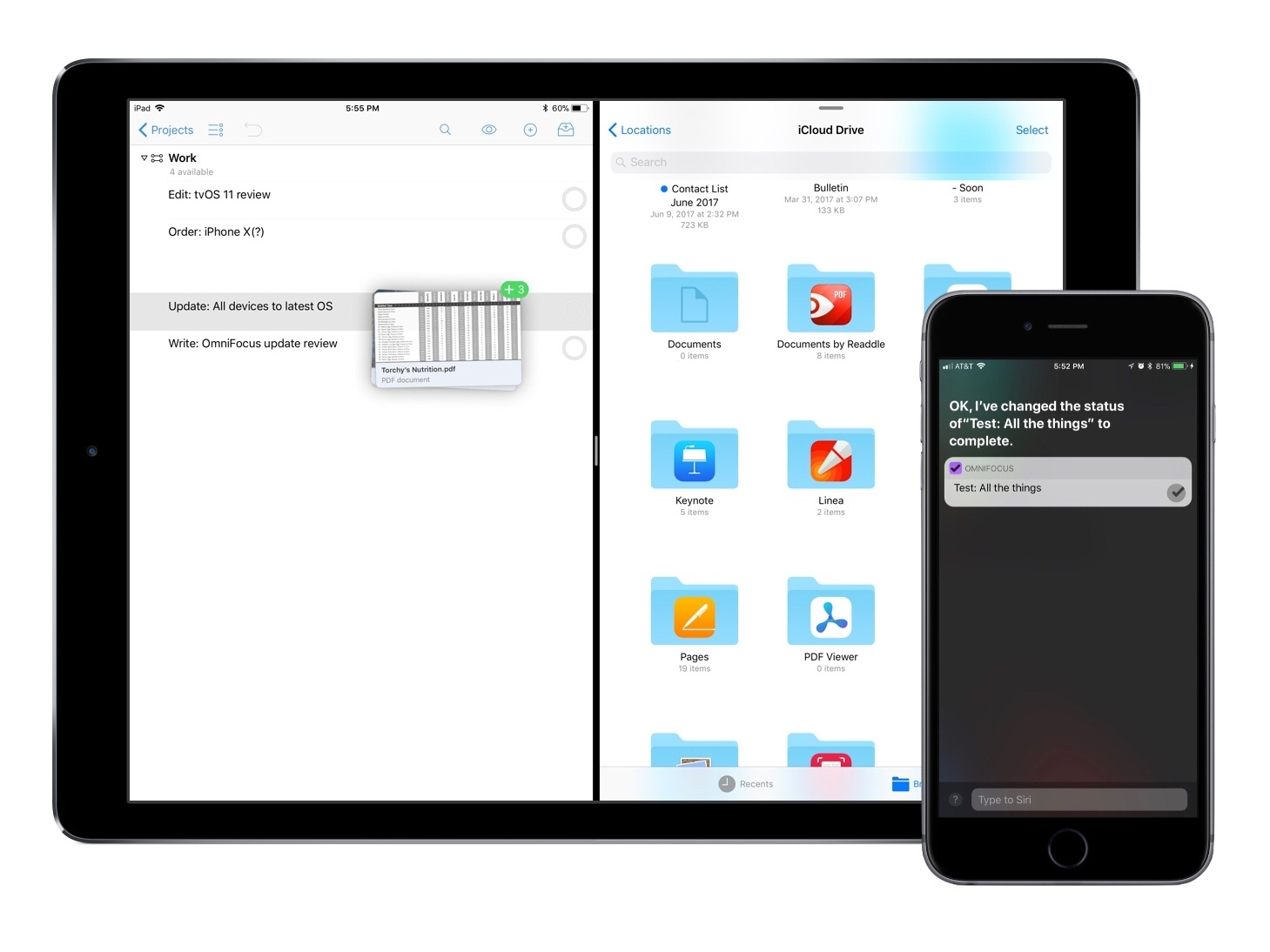 The Omni Group is one of the most reliable development teams when it comes to adopting new technologies available in Apple’s latest operating systems. This year is no exception, with OmniFocus serving as a shining example of the power of iOS 11’s drag and drop and a new SiriKit integration.

While many of OmniFocus’ drag and drop features are exclusive to iPad, so much has been done with the iOS 11 feature that even the iPhone version benefits in significant ways. On the iPhone, you can use drag and drop to quickly, easily rearrange tasks within a project. No need to toggle the edit button on or off – just pick up a task, drop it where you want it, and you’re done. If you want to move a task from one project to another, that’s easy too with drag and drop. You can even convert a task into a subtask by dragging it over the desired parent task and, when the prospective parent is highlighted grey, releasing. These methods of task organization feel so smooth and natural, they add tremendous value to OmniFocus for iPhone. 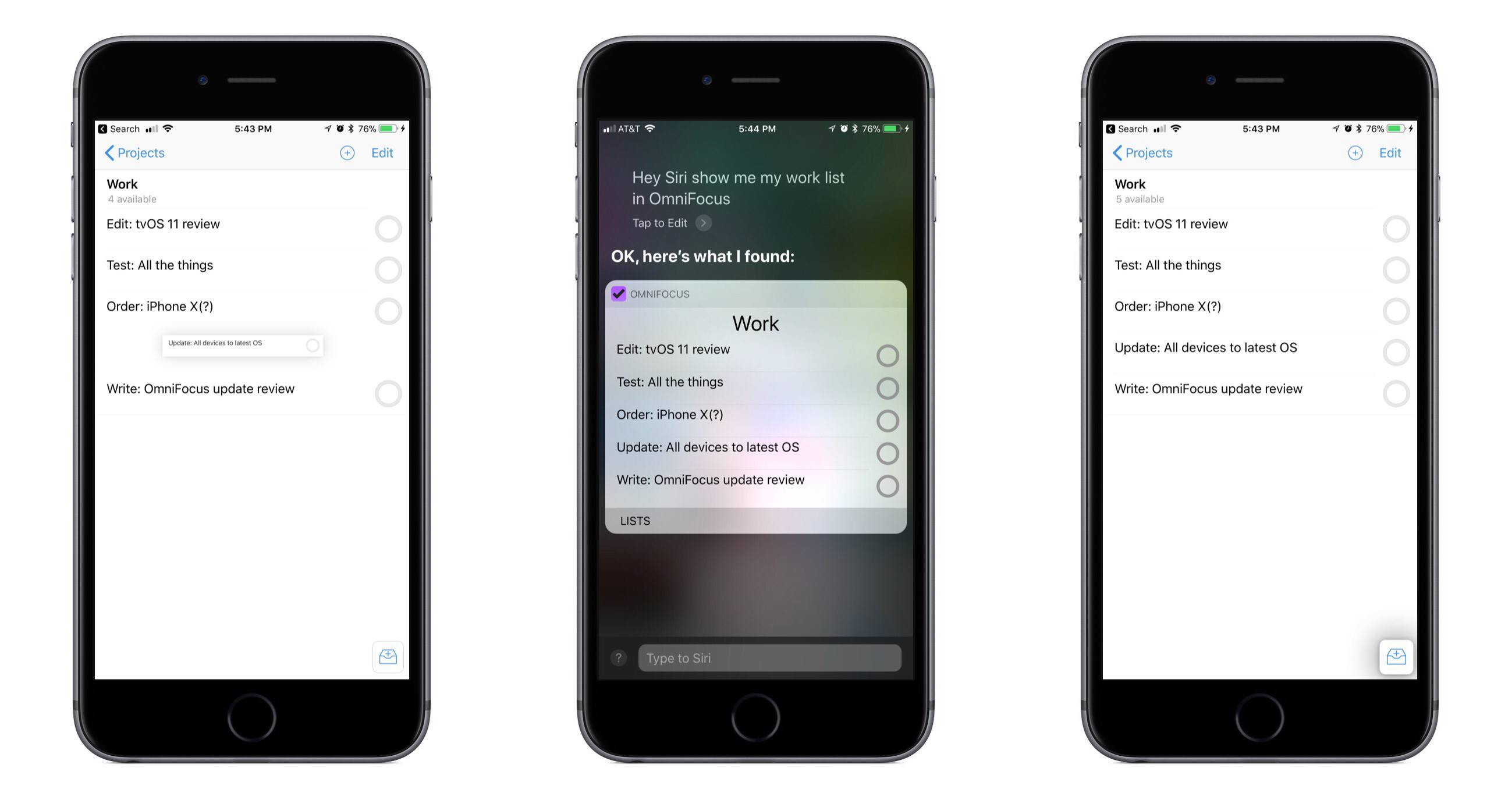 There’s one more noteworthy drag and drop benefit that extends to iPhone: whether you’re viewing a day in Forecast, a project, your inbox, or any other area that accepts adding new tasks, you can pick up and drag the New Inbox Item button and drop it in-line wherever you’d like it – a new task will be created in that exact spot. This works just like the excellent Magic Plus Button found in Things 3 – one of my favorite features in that app. The Omni Group’s use of drag and drop to imitate Things’ Magic Plus Button removes a key friction point from task creation. Combined with the organization benefits mentioned above, drag and drop on iPhone makes OmniFocus feel more natural than ever in a multitouch environment.

In iOS 11, OmniFocus for iPad gets all the drag and drop benefits of its iPhone counterpart, and then some. The Omni Group has implemented rich support for multi-app drag and drop that, among other things, makes adding files to OmniFocus easier than ever.

Dropping files, photos, or other types of content into OmniFocus can be done in one of three ways: you can drop those files into a project to create new tasks with embedded attachments; you can drop them on to an existing task to become its subtasks; or finally, you can open an existing task’s attachments tab and drop the files there. If you drop a file as a new task or subtask, its file name will be automatically used as the task name. I’ve tested dropping all sorts of files – PDFs, JPEGs and PNGs, Word documents, and more – it all works brilliantly. Whether you want to get files into OmniFocus or out of it, thanks to drag and drop that’s never been so painless.

Whenever I have documents I’ll need to reference to complete a task, I prefer to avoid having to hunt for those files elsewhere – having everything in one central location provides the best working experience. Pairing OmniFocus with iOS 11’s Files app makes this more efficient and and enjoyable than ever before, as I can quickly grab the files I need across a variety of file providers and drop them into OmniFocus tasks. Drag and drop performs exactly as I want: the files aren’t moved from their original locations, only copied to OmniFocus for reference. Thus, when it’s time to complete each task, everything I need is right where I want it, and I don’t need to bother with moving attachments back to their original locations in Files before completing a task – the system just works. 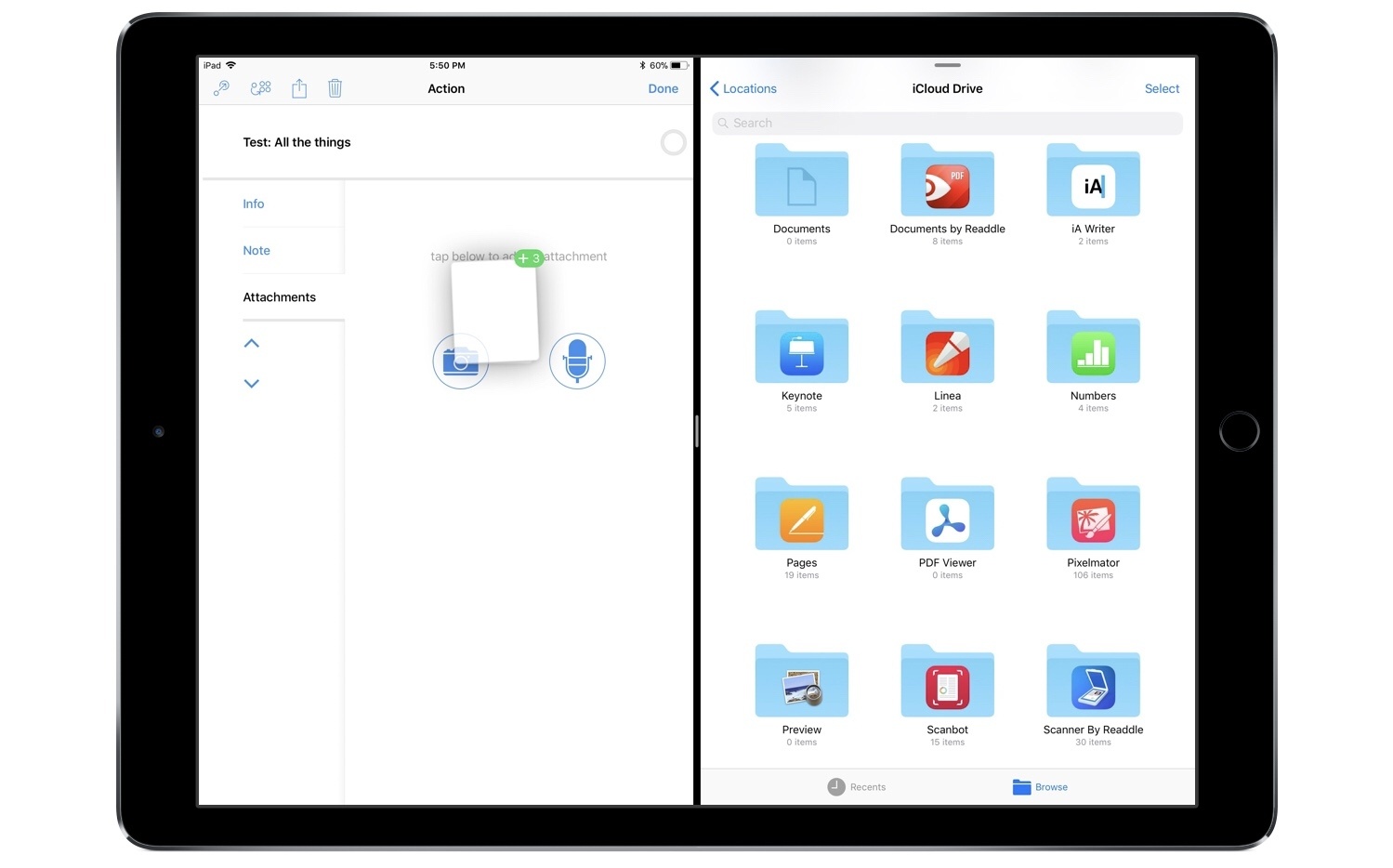 The last drag and drop-related item I’ll mention is the way OmniFocus handles text. If you have TaskPaper-formatted plain text you want to drop into the app, OmniFocus will create tasks that retain the structure and settings of that text. Additionally, dropping plain text with multiple lines will create multiple tasks. These behaviors work in reverse too, with dragging from OmniFocus and dropping as plain text into another app. If you use TaskPaper formatting, you’ll find a lot to love here. But if, like me, you would prefer not to deal with all the extra TaskPaper formatting – particularly when dragging tasks out of the app – The Omni Group has included a hidden preference for disabling TaskPaper formatting altogether.1 I was thrilled to find out that I could drag tasks out and have just their titles dropped as plain text. While it would be nice if that option was exposed in the app’s settings somewhere, its existence at all is a perfect remedy that fits with how I prefer drag and drop to work.

While iOS 11 doesn’t bring as many new SiriKit domains for third-party apps as we may have hoped, the Lists and Notes domain is the one I’ve most been waiting for. Among the growing array of benefits Siri offers, adding items to my task manager is among my most valued. I’ve long used Siri to create new items in Apple’s Reminders, and now that same power is extended to task creation in OmniFocus.

I should note that before iOS 11, OmniFocus did already have a way to create tasks via Siri, but it was a limited, at times unreliable workaround that involved creating reminders via Siri, and having those import to OmniFocus the next time you opened the app. It was better than having no Siri support at all, but what OmniFocus offers now is a truly native Siri solution.

In iOS 11, Siri can fulfill all kinds of OmniFocus-related requests. Many of these will be similar commands to what you might use for Reminders, only with ‘in OmniFocus’ added to the end. For example, “Add ‘Write the history essay’ to my School list in OmniFocus.” There are three main areas of functionality:

After you’ve used Siri with OmniFocus for a few days, it’s evident how much better native SiriKit support is than the previous Reminders-based workaround. Not only does Siri have direct access to manipulate data inside the app in real-time, but it also has a wealth of capabilities that were never possible before.

Tools like OmniFocus are meant to help you get more work done, not less, but inputting and viewing tasks the traditional way can lead to wasting time fiddling with an abundance of settings. Siri support helps users avoid that pitfall by providing a frictionless task management experience. I don’t know that I’ll use Siri to mark my tasks as complete very often, but creating tasks and viewing all items due today via Apple’s assistant are starting to become regular practice. Particularly when I’m deep into focused work, using my voice to manage tasks with minimal on-screen mode switching is extremely valuable, and feels like a step into the future.

OmniFocus was already one of the most powerful, full-featured task managers on iOS, and drag and drop and SiriKit support ensure that’s going to remain true well into the future. The Omni Group has leveraged these new technologies to take as much pain out of task management as possible, with multitouch and voice commands serving as the perfect vehicles to accomplish that goal.

OmniFocus is available on the App Store.