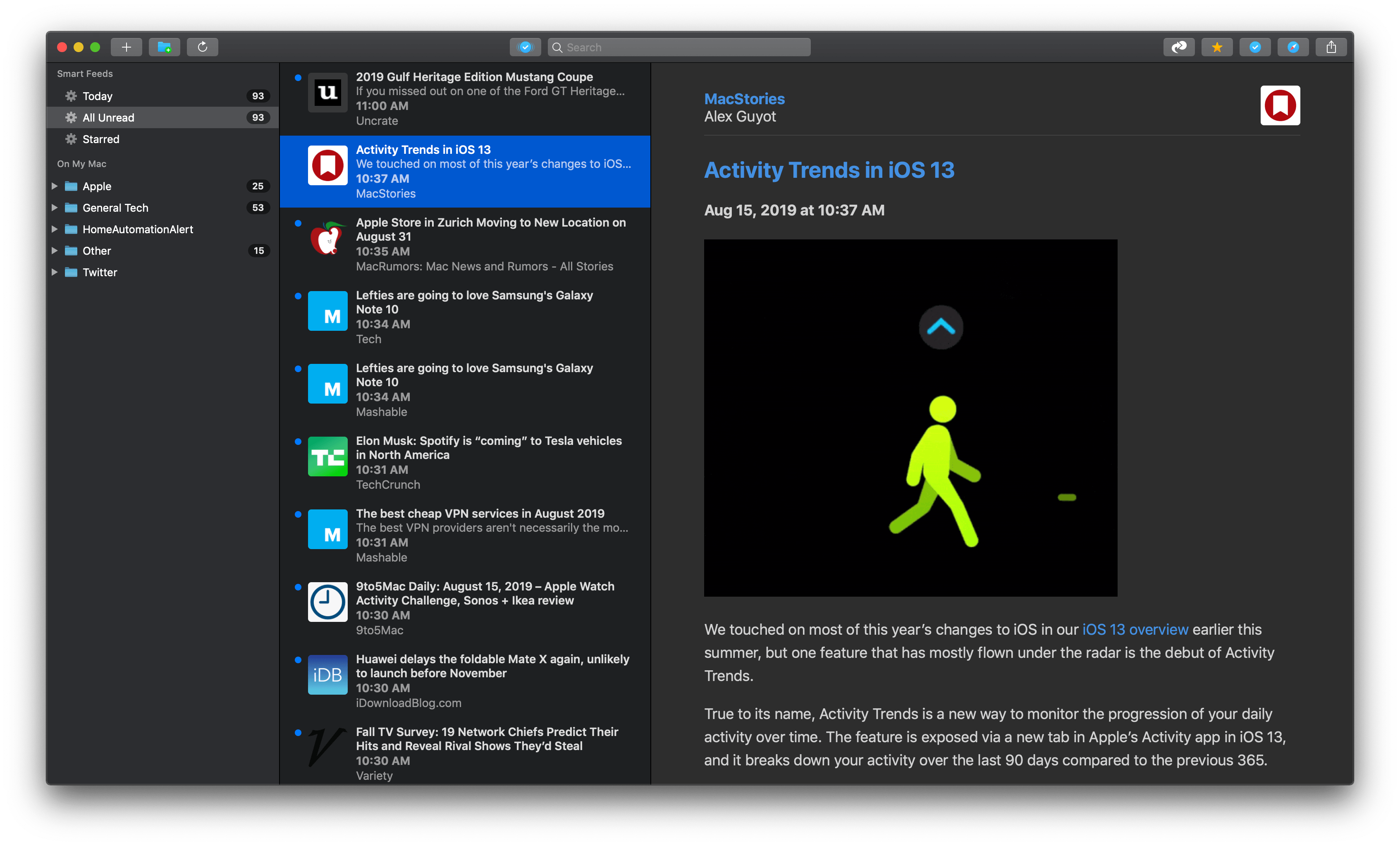 After Google Reader disappeared, a lot of people drifted away from RSS readers. For many, social networks like Twitter filled the void, leading some observers to declare the death of RSS. However, a funny thing happened in the aftermath of Google Reader’s demise. New sync services arose, and RSS readers flourished on iOS, where competition to provide users with new and innovative ways to read their favorite feeds has been fierce.

However, feed reader options haven’t been nearly as robust on the Mac. As I’ve noted before, many of my favorite RSS readers for iOS don’t have Mac counterparts, and those that do haven’t been developed with the same regularity we’ve seen on iOS. It’s into this landscape that NetNewsWire 5 launches today.

If you’ve been using RSS for any length of time, you’ve undoubtedly heard of NetNewsWire, but may not be aware of its long history. The app’s roots stretch back to 2002 with NetNewsWire Lite 1.0, which Brent Simmons developed. In 2005, the app was purchased by NewsGator, then Black Pixel bought the app in 2011.

Simmons began working on a new open-source RSS reader called Evergreen in 2015. But then in 2018, he reacquired the rights to NetNewsWire from Black Pixel, bringing the app back to where it started for the first time in 13 years. 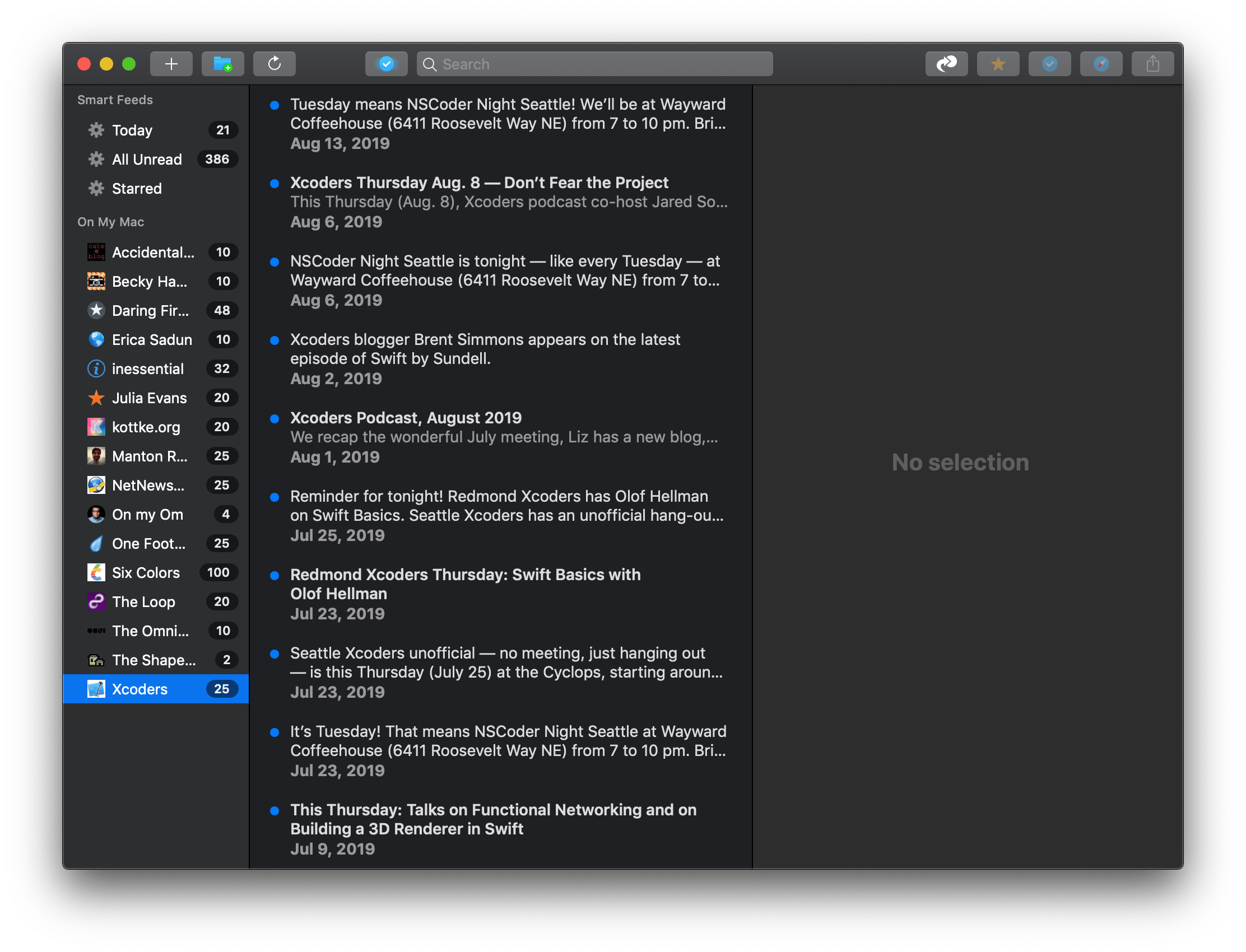 NetNewsWire comes with a built-in set of feeds to get newcomers started.

NetNewsWire 5 is an all-new, free app rebuilt from the ground up using Evergreen’s code, but bearing the name of Simmons’ original feed reader. The time and hard work by Simmons and other contributors to the open-source project are apparent. NetNewsWire 5 is a thoughtfully-designed, fast app with powerful search. The app won’t be my primary Mac feed reader until it has more syncing options or the planned iOS version is released, but if your feed reading is limited to the Mac or you use Feedbin to sync your feeds to iOS, NetNewsWire is an excellent choice.

You can subscribe to feeds directly from NetNewsWire by clicking the plus button in the toolbar or choosing ‘New Feed’ from the File menu, or from Safari with the app’s extension, which pre-populates the ‘New Feed’ form with a site’s feed URL. NetNewsWire also supports importing OPML files, which is the format that most apps and services (NetNewsWire included) offer for exporting the list of feeds you follow.

The app’s design will be familiar to anyone who has used RSS readers in the past. There are three panes with feeds on the left, article headlines and other information in the middle, and a detail view on the right. The leftmost sidebar, which lists your RSS feeds and can be hidden, is divided into as many as three sections: Smart Feeds, On My Mac, and Feedbin if you’ve set up an account.

Smart Feeds include ‘Today,’ ‘All Unread,’ and ‘Starred,’ which collect new items with today’s date, all unread items regardless of their date, and articles you’ve starred, respectively. On My Mac includes any feeds you sync directly to your Mac. 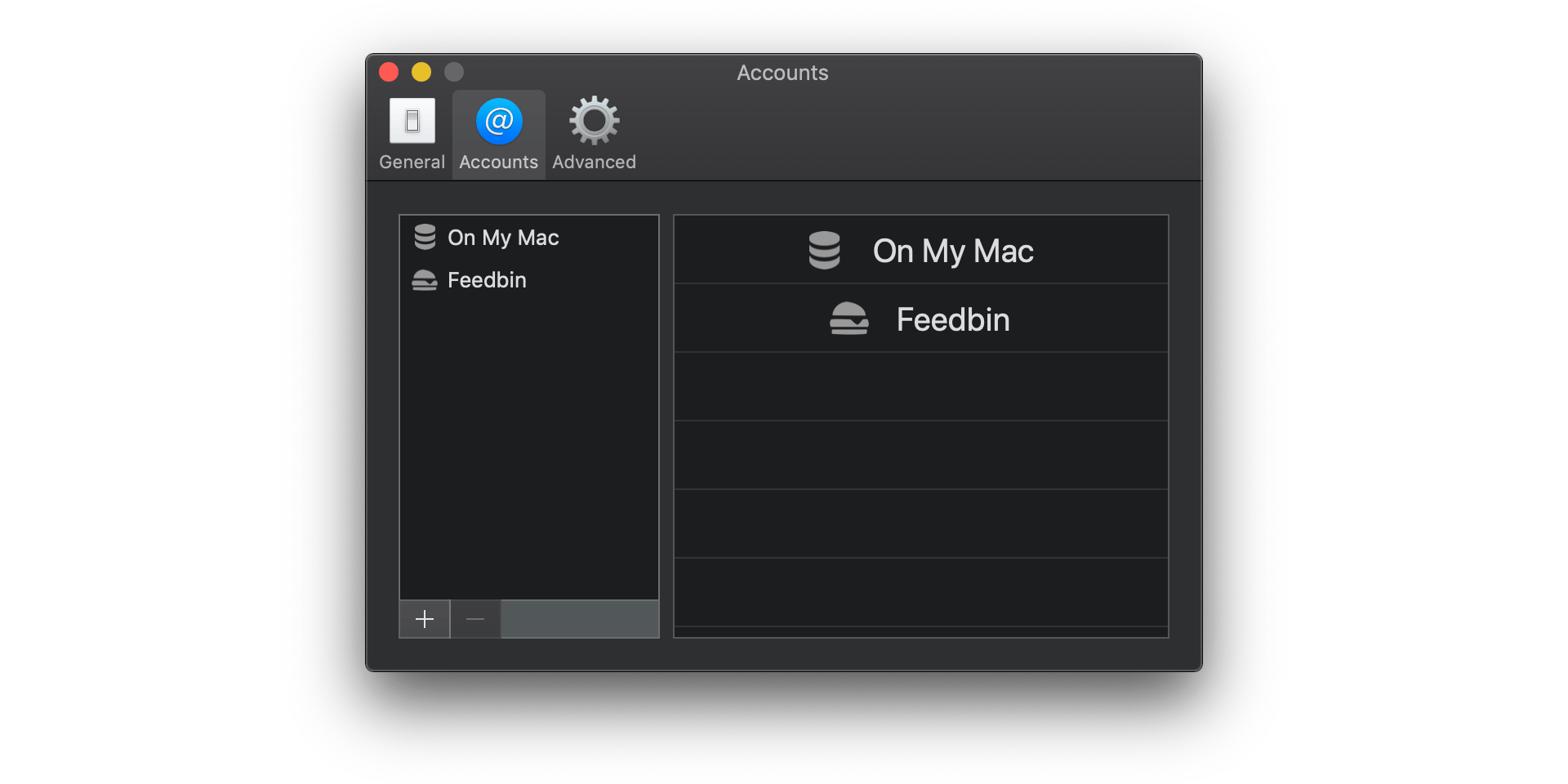 NetNewsWire can store items from the feeds you follow locally or sync with Feedbin.

If you’ve set up a Feedbin account in NetNewsWire’s Preferences, you’ll also see a Feedbin section in the sidebar. The advantage of using something like Feedbin over syncing locally to your Mac is that many iOS feed readers support Feedbin too, so using the service as an intermediary between NetNewsWire and a different iOS reader will keep the read-state of your feeds in sync across both apps.

Feedbin is a good place for NetNewsWire to begin integrating with sync services because it’s used by a lot of people and other feed readers. As a complete reboot of the app with a brand-new codebase, it’s understandable that the app only works with one sync service at launch. Simmons has said that other sync services are on the roadmap for future development, which is good to hear. Although Feedbin is widespread, there are lots of other popular RSS sync services, including Feedly, NewsBlur, FeedWrangler, and Inoreader, to name just a few.

The center pane of NetNewsWire is a list of all the articles in whichever Smart Feed, folder, or individual feed is selected in the sidebar. This list can be manually or periodically refreshed at set intervals that can be chosen from the app’s General Preferences. Articles can also be sorted newest to oldest or the other way around, and each entry in the list includes the headline, publication name, time, and site icon, making it easy to scan quickly for things you want to read. The final pane is where each selected article appears, displaying the name of the feed, author, site icon, headline, and date. 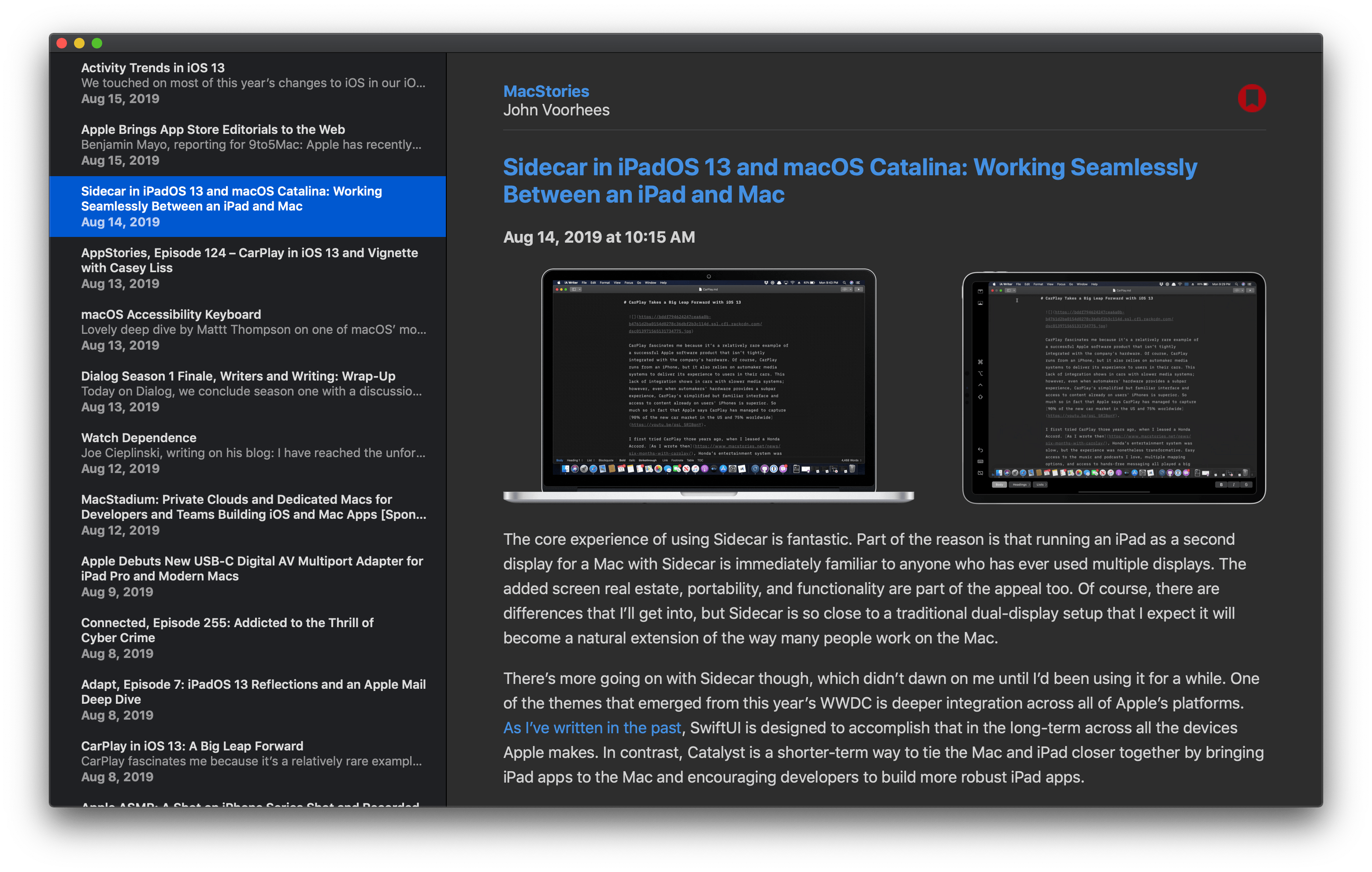 The toolbar and feed list can be hidden for a more minimalist reading experience.

The top of the window features a customizable toolbar that can be hidden and by default includes buttons to add a new feed, create a folder for organizing multiple feeds, refresh your feeds, mark all or some feeds read or unread, search feed, navigate to the next unread feed, star an article or open it in Safari, and share using the macOS share sheet. The same functionality, as well as feed and UI navigation, can be accomplished with a full set of keyboard shortcuts too. NetNewsWire also supports dark mode and AppleScript.

Simmons and the other contributors to NetNewsWire have built a solid foundation for the future with version 5.0. The app parses feeds consistently, and I’ve been impressed with the app’s search, which is faster and more capable than any other RSS client I’ve used. I also appreciate that the app supports the Mac’s share sheet because I send links elsewhere for reading later as often as I read them in my feed reader itself. NetNewsWire also includes a preference to open links in the background, an option that every app that links to the web should offer. 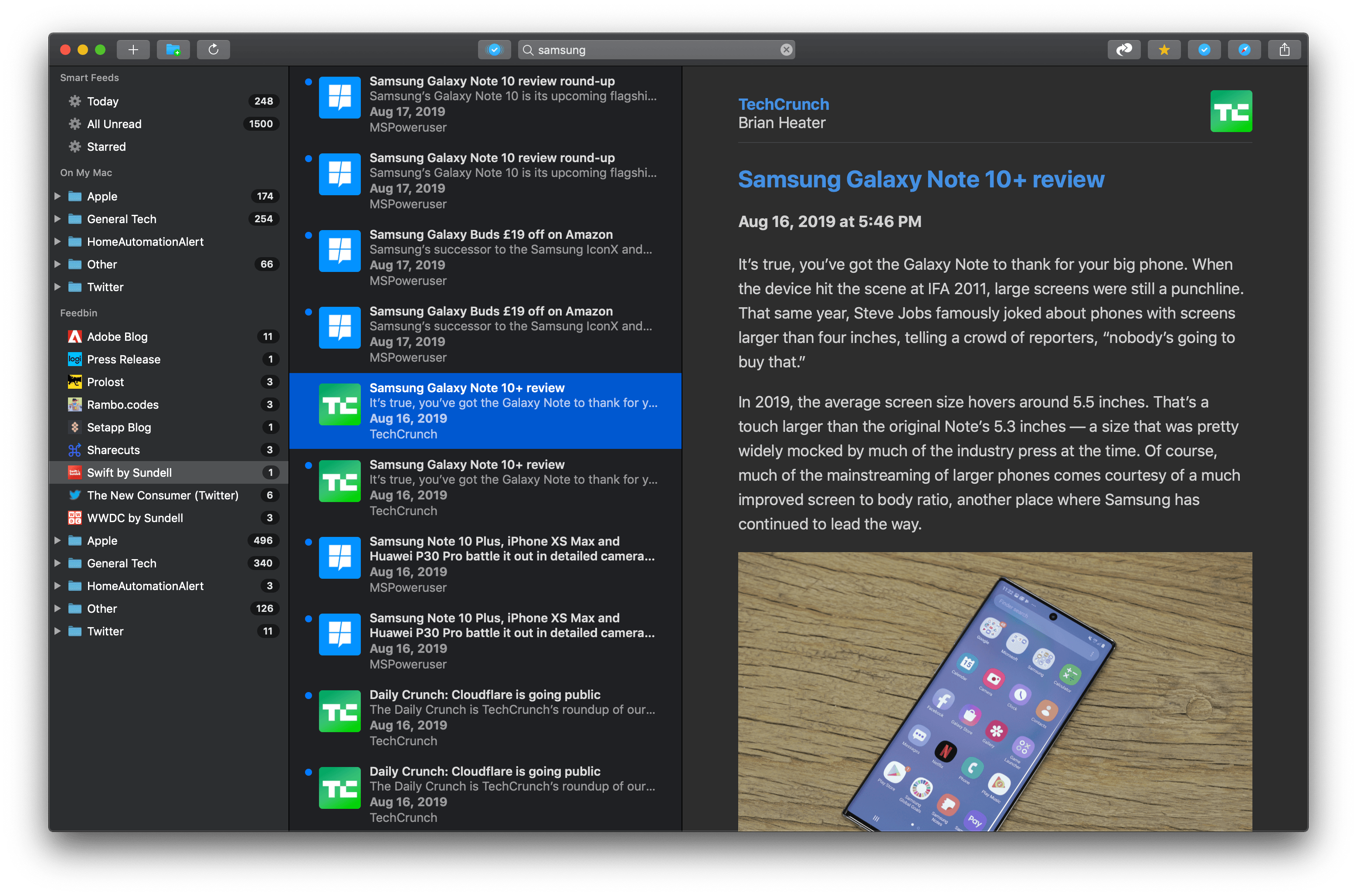 As a reboot, NetNewsWire 5.0 is effectively a 1.0. As a result, there are a couple of things missing. The first is additional sync options. I read RSS feeds on my Mac and iOS equally. Ideally, I’d like an iOS version of NetNewsWire, but with sync services, I can manage using two different apps like I do today. However, until NetNewsWire supports more than Feedbin, its utility as a cross-OS feed reader is limited. Fortunately, Simmons has said other sync services and an iOS app are coming.

I’d also like to see NetNewsWire add more customization options, so users can tailor the reading experience to their individual tastes. Many other readers let users pick the typeface and its size, margin width, line spacing, and other aspects of the appearance of articles. I like the design NetNewsWire has settled on as its default, but I’d like the option to tweak it myself. I’d also like to be able to hide the unread count badge on the app’s icon from the app’s Preferences, rather than from the Terminal, and display only unread articles in the article list.

Finally, I read my feeds from newest to oldest and frequently skip over many headlines. NetNewsWire lets me mark every article older than the one currently being viewed as read, but not newer ones, which is an option I’d like to have as I work my way back in time through a long list of articles.

RSS feeds are an essential part of my daily workflow at MacStories. It’s a concentrated list from a wide variety of sources that I can tear through quickly throughout the day, picking out interesting, unique gems that I want to share with readers. For monitoring a large volume of sources, the efficiency of RSS can’t be beat, which is why I’m excited about NetNewsWire.

There are areas of the app I’d like to see supplemented and refined, but Simmons and the other contributors are off to a terrific start. I look forward to watching NetNewsWire evolve. I’ve been concerned about the state of feed readers on the Mac for a while and seen too many other readers that are buggy or have been left to languish. As an open-source project and with a core group of contributors that care about the reading experience and maintaining the open web, NetNewsWire has the potential to become my and many other users’ go-to RSS reader on the Mac.