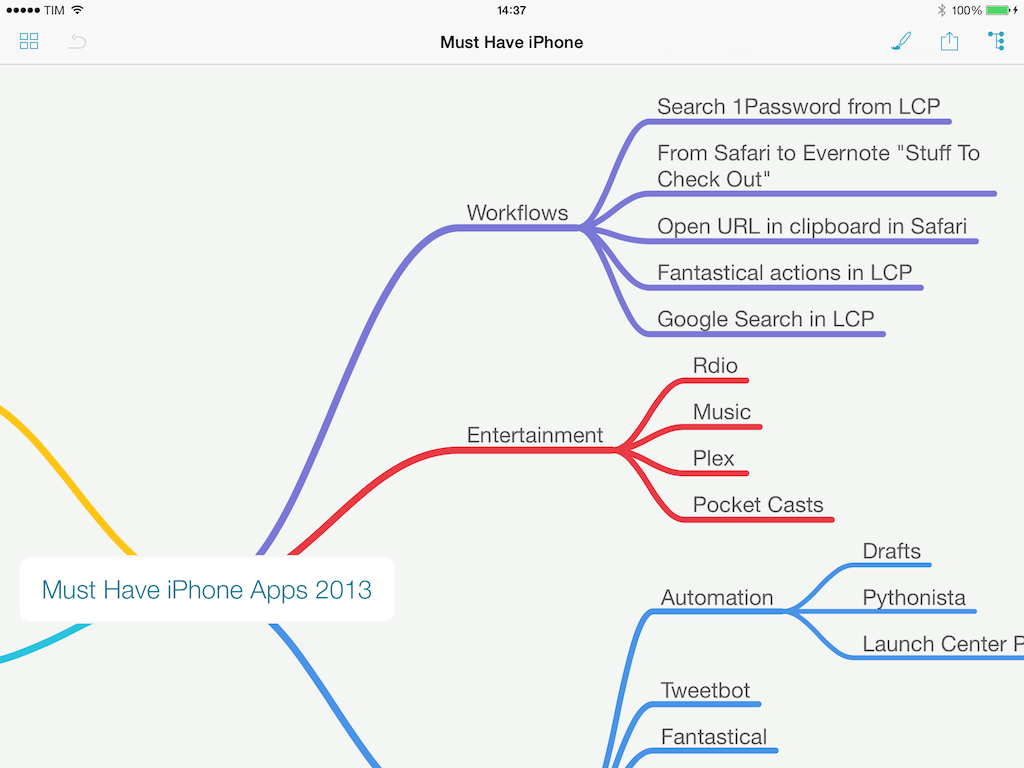 When I’m writing for MacStories, I tend to prepare articles as outlines in Evernote, where I’ll also throw in some images and hyperlinks. For pieces that are focused on a single subject (like an app review, a tutorial, or an opinion piece), the simple outline system works well because Evernote can keep everything in one place and show inline previews.

For longer articles that require deeper research and span a variety of topics, however, I like mind maps. Since I was in middle school and especially in high school, I got used to remember topics by creating mind maps (“concept maps”, as our teachers called them) with pen and paper for classes like History, Ancient Greek, English Literature, or Philosophy. Back then I had no iPhone or iPad and the school’s computers were some cheap Pentium 4s that the school administration couldn’t upgrade due to lack of regional funds, so I spent hours drawing little boxes and coloring them with highlighters. I made hundreds of them over the years.

When my brain has to jump from point to point several times and a text outline isn’t enough, I like the visual approach of mind maps. And in the modern age, unless I need specific advanced features of iThoughts, I usually open MindNode – IdeasOnCanvas’ app for the iPhone, iPad, and Mac. MindNode for iOS gets the 3.0 treatment today with a major update that redesigns the app, makes it iOS 7-only, adds new features, and cleans up some old ones while staying free for existing customers.

I don’t use MindNode every day – I would say probably once a week when I’m planning a big article or feature for the site – but when I do, I like its elegant layout and underlying simplicity. MindNode, which I covered on MacStories in the past, is one of the few apps that I use with iCloud sync because, aside from a couple of occasions, it’s always been fast and smooth for me in the past. I don’t have particular exporting or inter-app communication needs for my mind maps (I just keep one next to my iPad or MacBook while I’m writing), but I’ve used the PDF and PNG options to send a document to coworkers.

For version 3.0, the entire app has been redesigned with iOS 7’s focus on content in mind: in the main Mind Maps screen, thumbnail previews are larger and you can tap on an arrow button next to a map’s name to show buttons to rename a map, move it, duplicate it, or delete it. The document browser has been rewritten: folders sync with iCloud, and they open/close with a transition that’s similar to Apple’s one for folders on the iOS 7 Home screen. If I had to nitpick, I’d say that it’d be nice to be able to drag & drop items to create folders and to have slightly faster transitions. 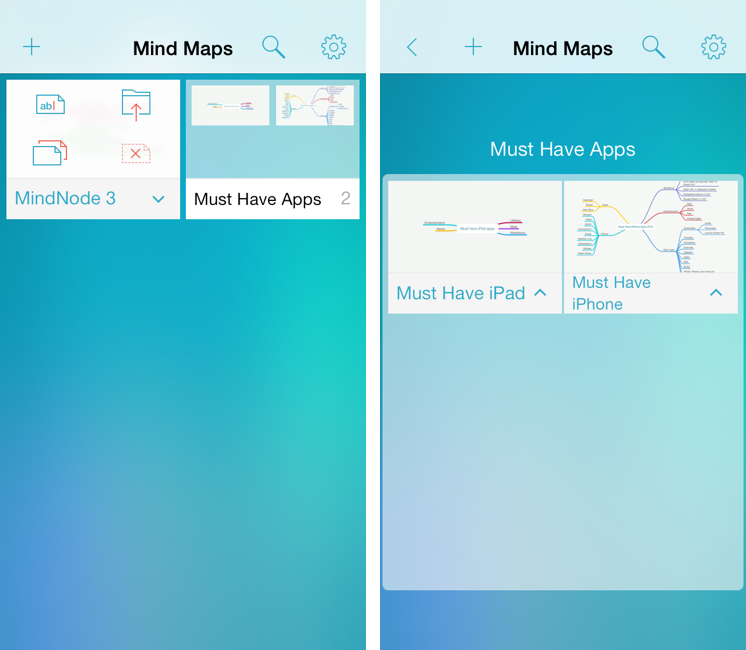 Search within a list view has been added to MindNode, but it doesn’t look at the contents (text) of your maps – just the filename, which isn’t particularly useful to me. In my tests with MindNode 3.0 on an iPhone and iPad and MindNode Pro 1.10.4 for OS X, iCloud sync was substantially improved from the old version: changes were synced after a few seconds across devices, and I had to force the app to create a sync conflict. When a conflicted copy was detected, MindNode brought up a conflict resolution tool that wouldn’t let me edit a document unless I chose a master copy again – which is the right way to handle conflicts (see: Byword).

The mind map editor has received a new default theme called “Delight” (which I like), but, overall, the MindNode experience has stayed the same. You can create cross connections between nodes (tap node > Connect > tap another node) and you can style those connections from a new Inspector that lets you choose color, line type, and thickness; the Inspector has been redesigned for nodes as well, and I find it easy to use and navigate with tabs and a button to apply all changes to subnodes manually. MindNode still doesn’t come with the powerful template options of iThoughts, but the app has always been about simplicity and good default choices over tons of settings and cruft; set your expectations accordingly. 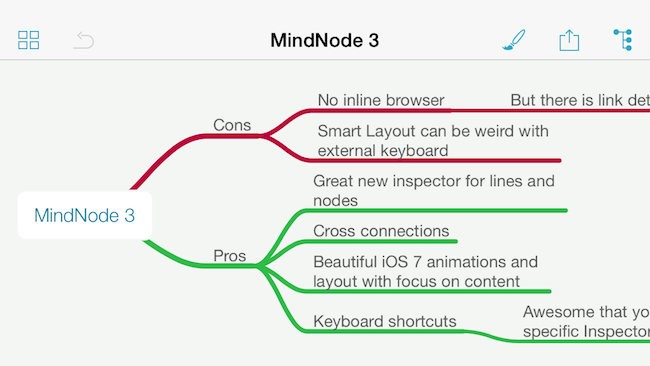 One of my favorite features of the new MindNode is, unsurprisingly, support for external keyboard shortcuts. When using MindNode on the iPad, you can now use almost all of the shortcuts that MindNode supports on the Mac, which include note creation/navigation and access to the Inspector. 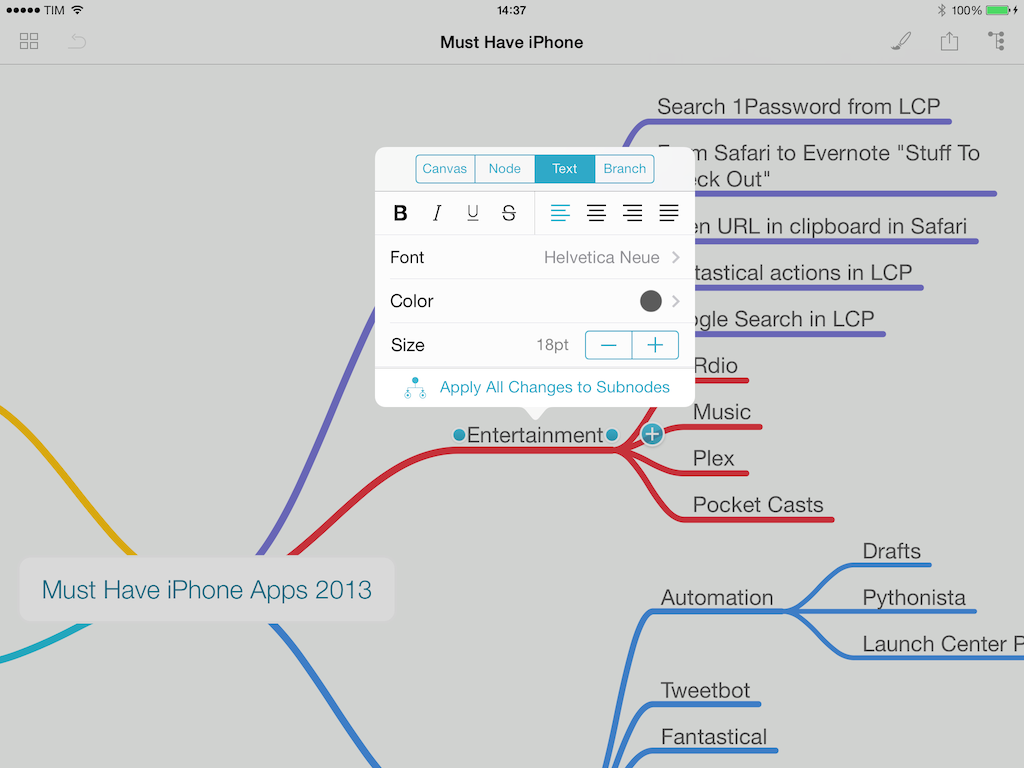 My most used shortcuts, though, are triple-Space and triple-Return (also supported with the software keyboard) to quickly add a new sibiling and sub-node, respectively, and ⌘1…4 to open a specific tab of the Inspector. The last ones are handy because I often just need to tweak the color of a line, and ⌘4 lets me access those settings without having to tap the Branch tab in the Inspector. Keyboard shortcuts aren’t for everyone, but I love how developers are adding them to their iPad apps for better consistency with their Mac counterparts.

There’s a few things I don’t like. For one, MindNode still doesn’t have the same web research capabilities of iThoughts: hyperlinks are recognized by the app, but they open Safari. There’s no inline browser and no way to easily get web URLs and text into a map – features that would obviously add a layer of complexity to the app. Similarly, you won’t find support for Markdown outline generation and pasting in MindNode.

MindNode 3.0 is an iOS 7 update done right. The new document browser is elegant and intuitive; iCloud sync fast and reliable. The app hasn’t lost the simplicity of its editing experience and it retains all of the multi-touch gestures and options to manage nodes and connections; sharing options are still available, and the developers added built-in support for MyMindNode, a web service to post mind maps online and embed them on your website.

MindNode 3.0 is impressive on the iPad, where the large canvas makes working with maps a pleasure and keyboard shortcuts help in navigating maps and adding nodes.

MindNode 3.0 is a free update for existing customers and it’s available at $9.99 on the App Store.