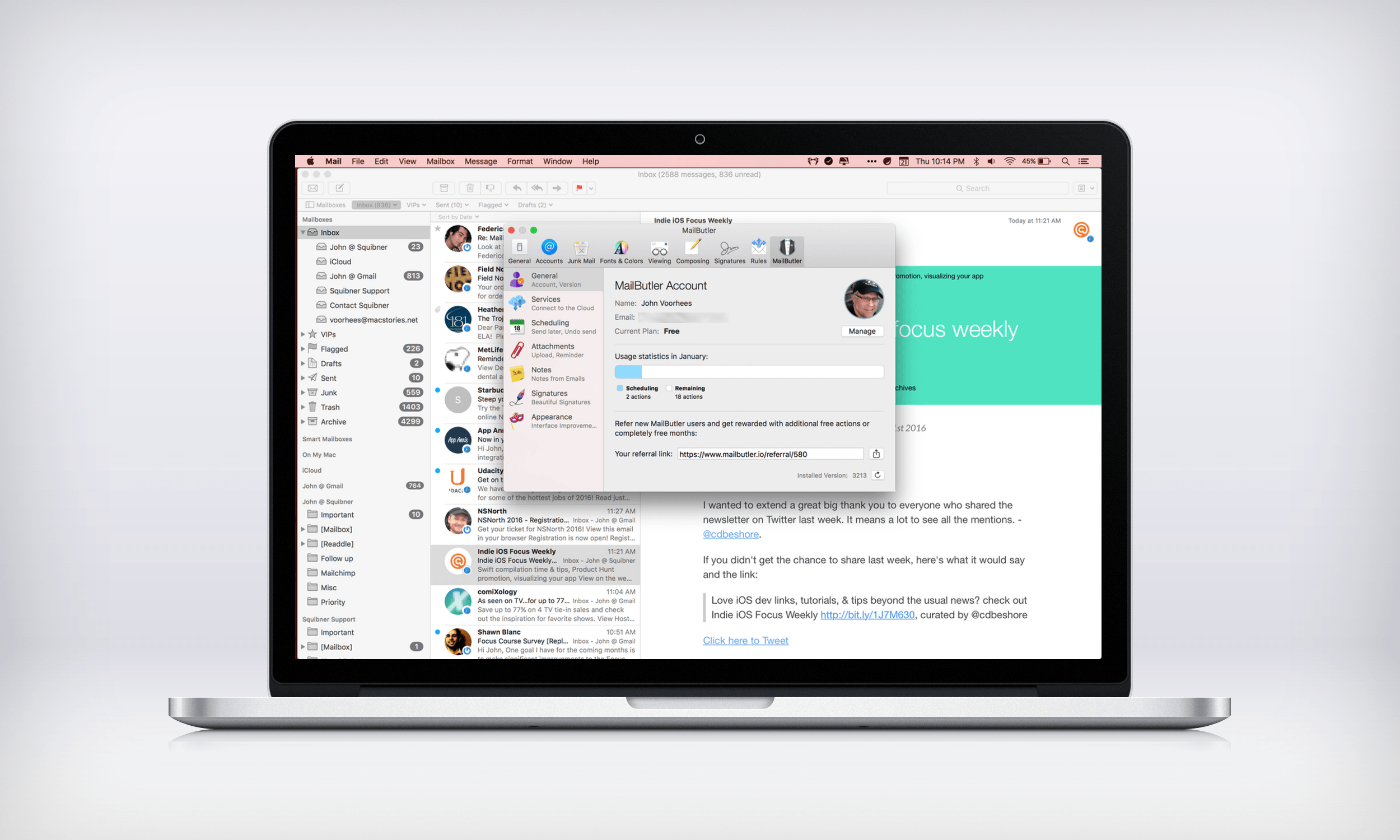 Like many of Apple’s stock Mac apps, Mail gets the job done without many bells and whistles. That leaves gaps for third-party developers to fill with their own apps and plugins. MailButler does just that – it’s a plugin for Apple Mail from Berlin-based Feingeist Software that adds six tools to Mail that are especially useful if you send a lot of email. 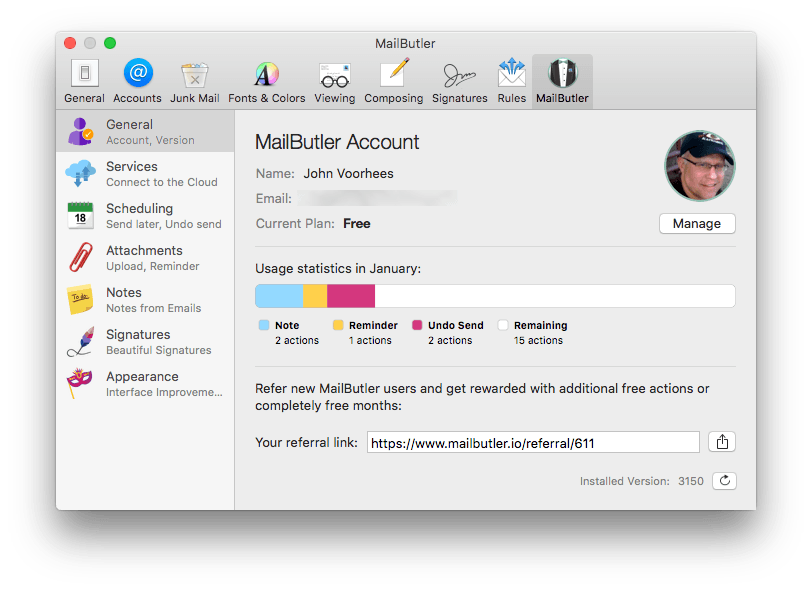 One of MailButler’s marquee features is its ability to send a message at a later date and time. MailButler adds a button to the toolbar of Mail’s message composition window that looks just like the existing ‘Send’ button in Mail, but with a clock icon added.

To send an email later, click MailButler’s special ‘Send’ button, which opens a scheduling sheet that slides down from the window’s toolbar. From there, you have three choices. First, messages can be sent on a ‘Special Date,’ meaning a specific time later today, tomorrow, or the next business day. Second, you can send a message after a specified number of minutes, hours, or days pass. The final, most granular setting allows you to pick any date and time in the future to send your message. 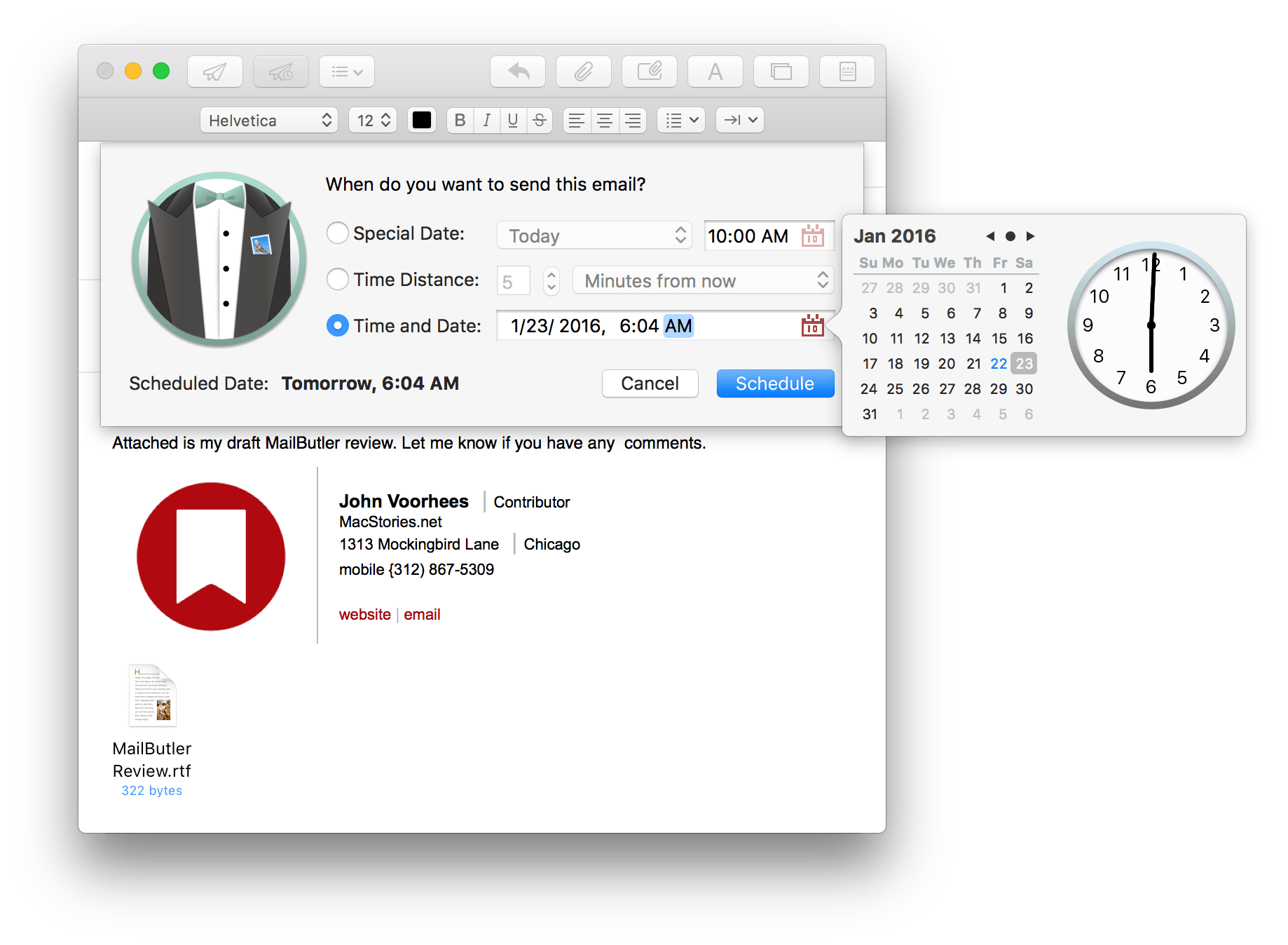 After you set the date and time, clicking the ‘Schedule’ button places your message in Mail’s Drafts folder where it sits until the appointed delivery date and time. Keep in mind that MailButler operates locally only. Unless you have Power Nap enabled and the Mail application open, putting your Mac into sleep mode or turning it off means your scheduled message will not be sent until the next time you wake your Mac or turn it on.

MailButler also gives you the option to delay sending all messages for a specified number of seconds, which effectively lets you recall a sent message. A window slides down from the title bar of Mail as soon as you click send asking whether you want to ‘Undo Send’ or ‘Send Now.’ Of course you are not really recalling the email, but the short delay between clicking send and actually sending the message from the Drafts folder provides a little extra peace of mind. 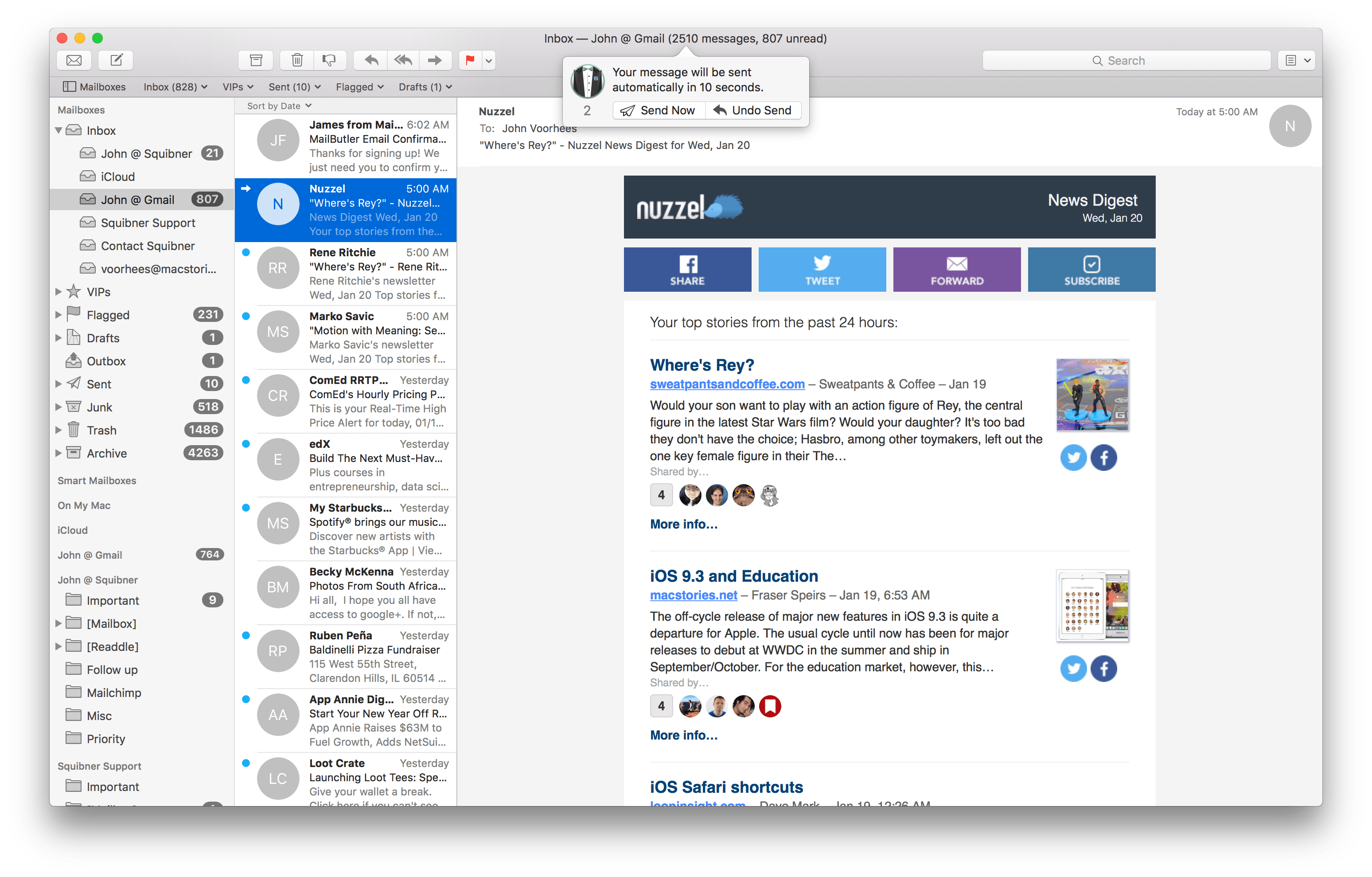 Many email systems cannot handle attachments over a certain size. With MailButler, you can specify a file size in preferences, above which any attachments are uploaded to an online storage provider. As soon as you choose a file to attach, a picker appears just above the area where you compose your message that lets you choose from the the storage services you have configured in preferences. As soon as you click ‘Send,’ MailButler uploads the files and inserts links to them in your message. MailButler’s attachment feature works with Dropbox, Box, Google Drive, Droplr, and other services. 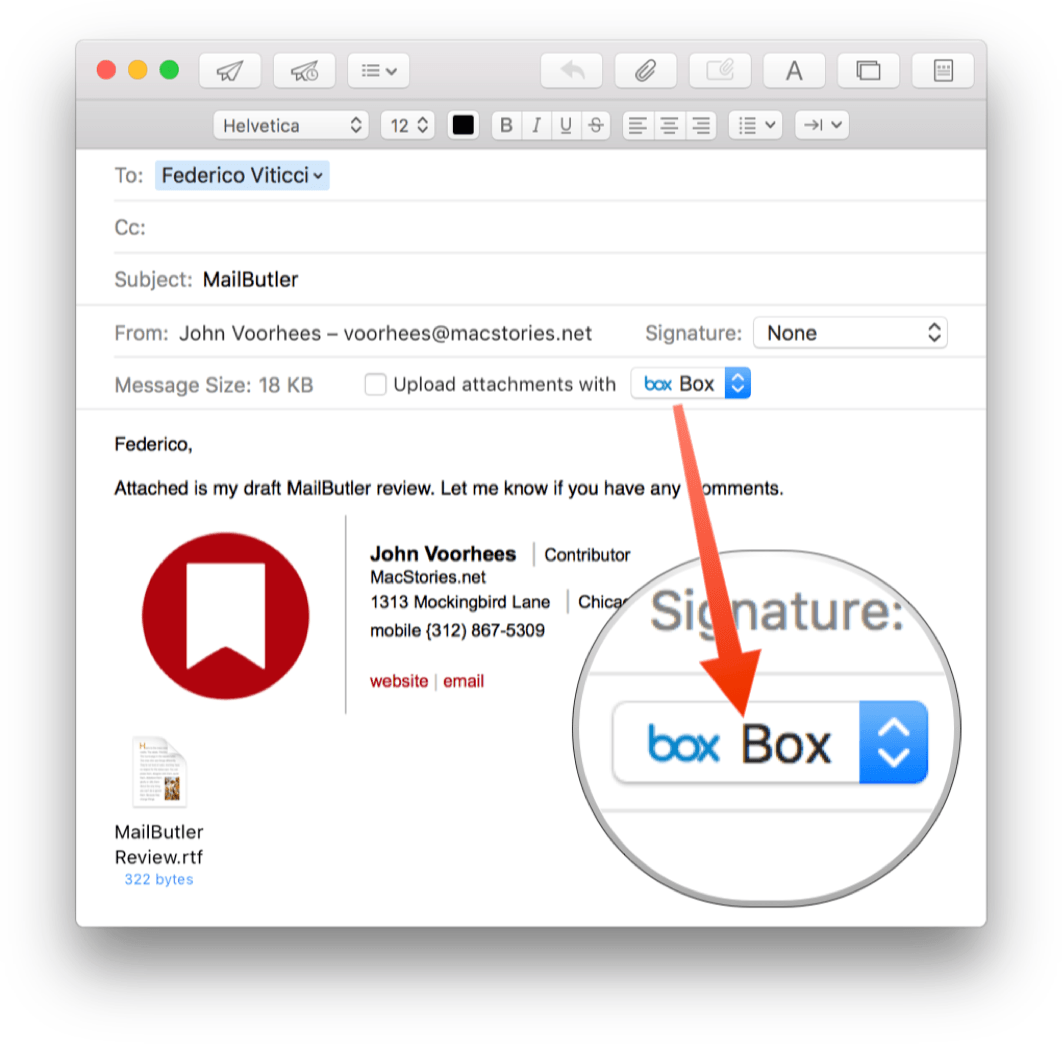 It’s probably a safe bet that you have sent an email at some point and forgotten to include an attachment. MailButler tries to anticipate your intent to send a file based on keywords in your message. If it thinks you forgot an attachment, MailButler pops up a reminder before sending your message. In my tests, MailButler correctly identified ‘attach’ and ‘attachment,’ as keywords, but failed to prompt me for an attachment when I typed “Here is the file we discussed.” Fortunately, you can add your own keywords to MailButler’s repertoire.

When I saw that MailButler has a notes feature, I got excited.1 Strangely, Mail cannot access the system share sheet on Mac or iOS, making it unnecessarily difficult to get information out of Mail. I have always felt that keeping tasks and reference materials among other email is one of the primary things that makes email hard. My bills, package delivery notices, and other important messages easily get lost among advertisements and other unimportant email. The ability to export messages to any app that can accept text, links, and images would be ideal.

Unfortunately, MailButler does not make up for Mail’s lack of access to the share sheet. MailButler can export messages as notes, but only to Evernote. That’s not to say that the feature is poorly implemented – it’s not. MailButler offers two export options that Evernote users should love. The first is ‘Quick Note,’ which simply dumps your email into Evernote for future processing. The second is ‘Add Note,’ which adds the ability to tag, specify a notebook destination, and do other things with notes before sending them to Evernote. In my tests, emails were accurately reproduced as notes in Evernote every time. 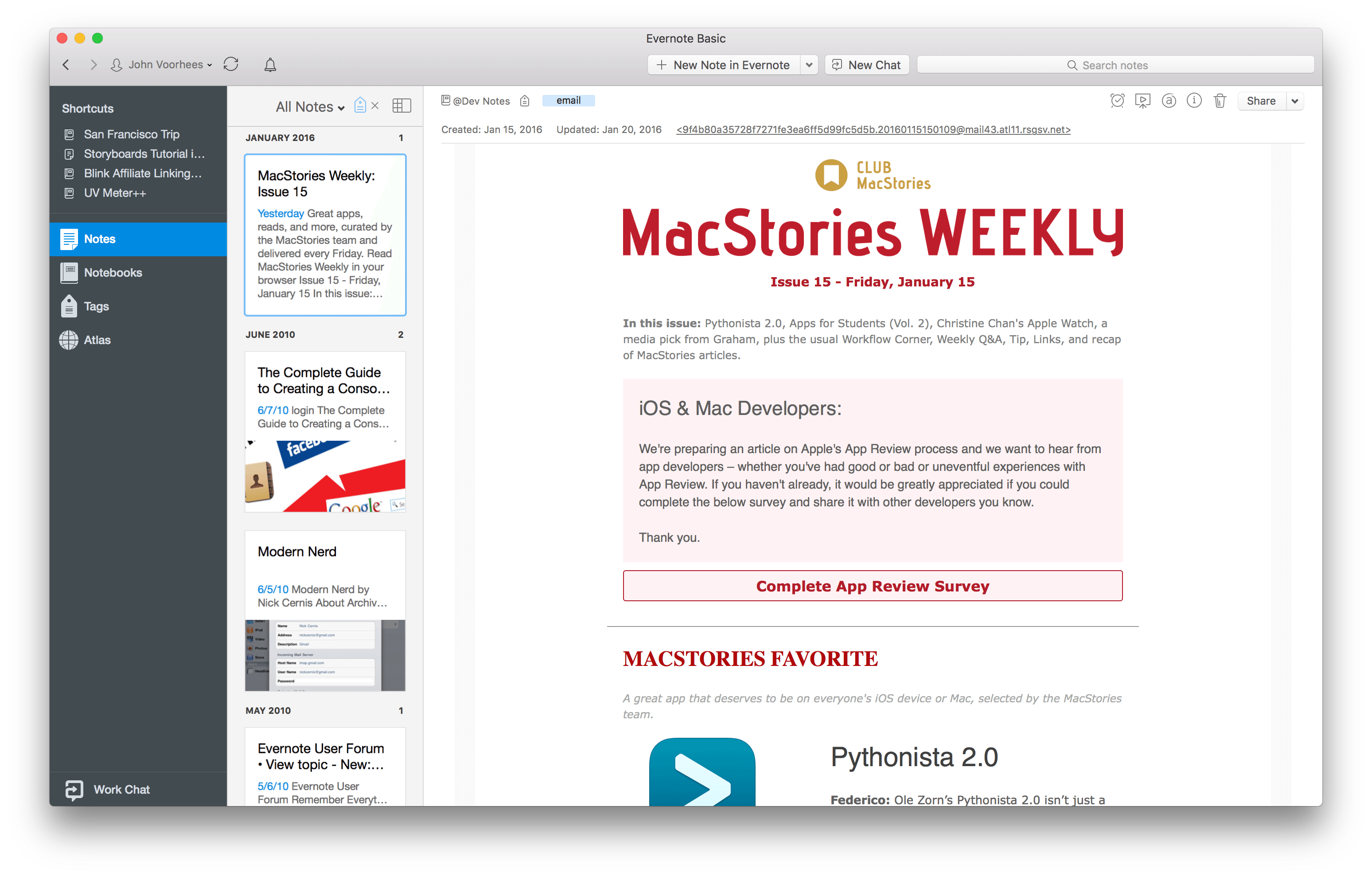 The most noticeable change that MailButler makes to Mail when you first open it is the addition of avatars for most senders. MailButler pulls images from Contacts, Facebook, Flicker, Gravatar, Google+, and the web to create the avatars. Each avatar includes a small icon indicating its source. Most of the avatars in my inbox were pulled from the web and many looked a little rough because they were not Retina graphics, but on balance the feature worked well to help me identify senders at a glance. 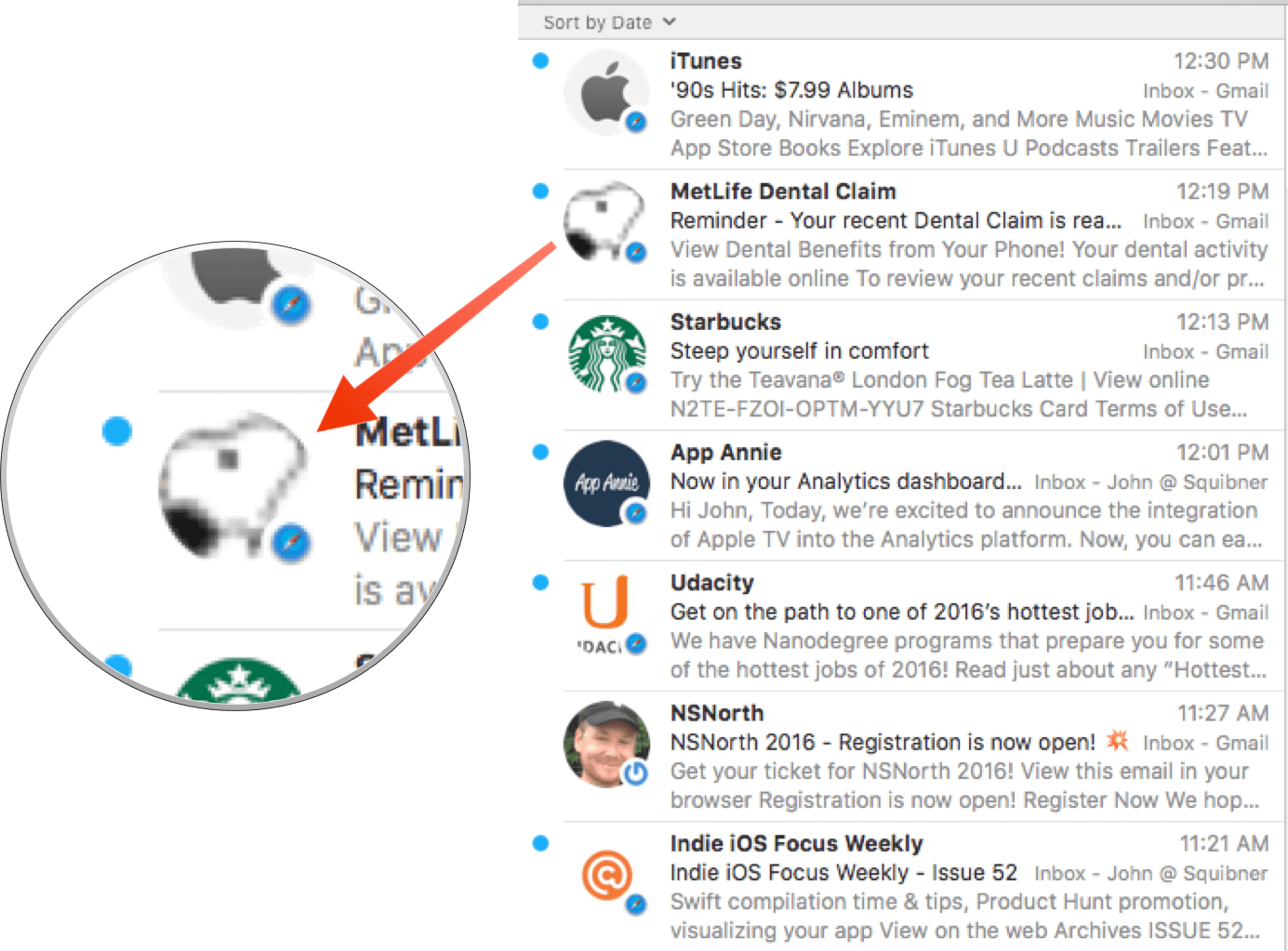 MailButler also offers nine nicely-designed signature templates that are good starting points for designing your own. A few are a little busy for my taste, but I did appreciate the level of customization each template affords. Using the Black Tie template I designed a couple of signatures that I think turned out well. 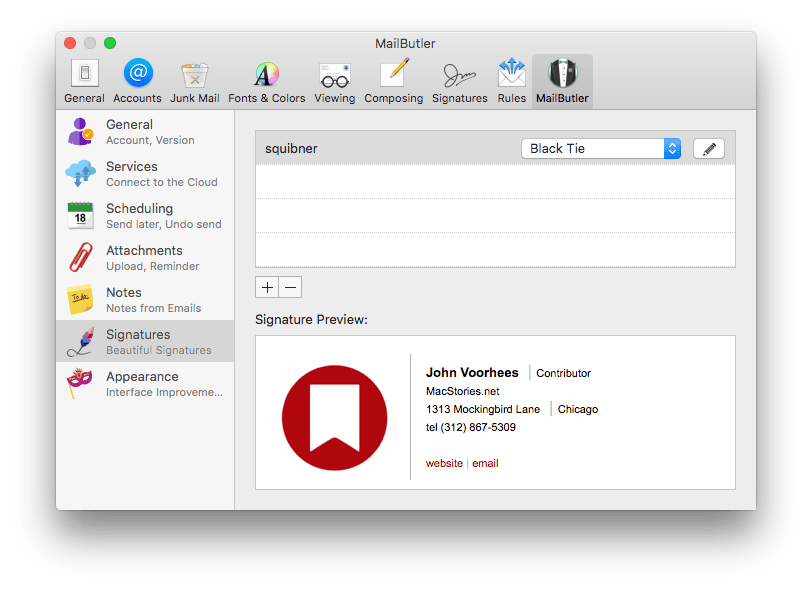 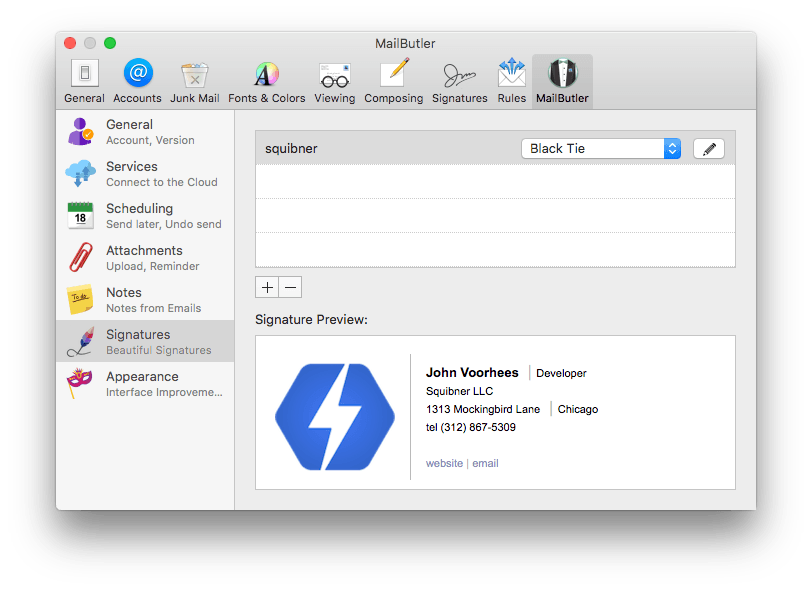 MailButler is priced like a service. There is a free tier and paid tiers that cost less if you pay yearly instead of monthly. The free tier includes one user account, twenty actions per month, one email avatar, and basic support. If you have a free account, each time you use a MailButler feature, you use one of the twenty actions allotted to your account. As a result, it is easy to use all of your allotted actions quickly, but it is a good way to try MailButler before committing to a paid tier.

The ‘Professional’ tier costs €7.95 per month or the equivalent of €5.95 per month if purchased as an annual plan. The ‘Professional’ plan adds unlimited actions, three email avatars, and premium support to the free plan. A ‘Corporate’ plan is also available for a minimum of ten users at a further discounted per user. 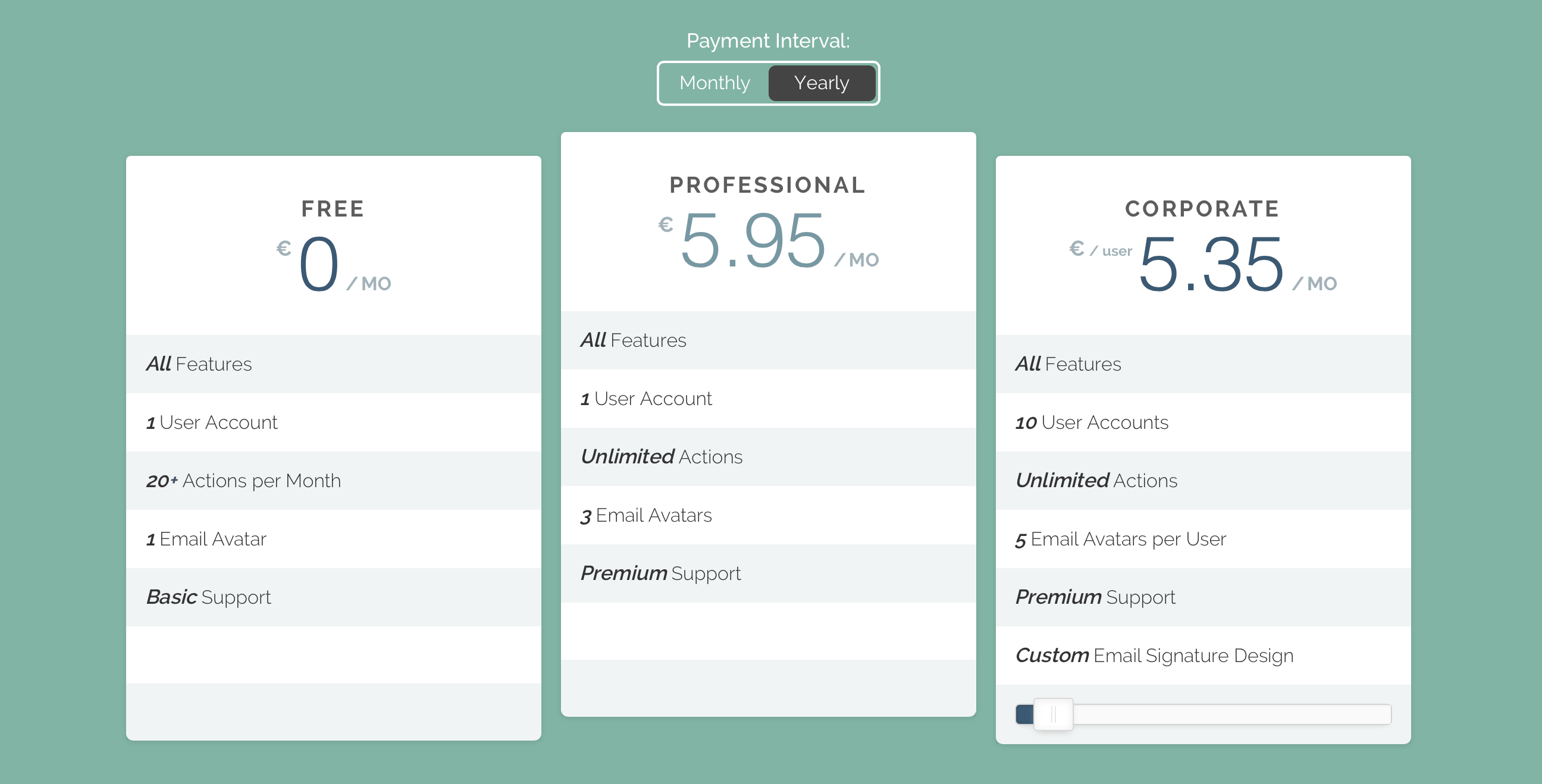 MailButler is primarily about sending email, which is something I do as little as possible these days. Slack and iMessage have replaced email for most of my outgoing messaging needs. That isn’t to say I don’t get a lot of email – I do – but it means that tools that surface important messages and pull them out of email to a place where I can address them later are more important to me than sending email. As a result, although I find the features of MailButler nice additions to Mail, its lack of email management tools, other than the ability to export messages to Evernote, is problematic for me. That said, if you send a lot of email or are an Evernote user, MailButler will save you time, help prevent you from making common email mistakes, and enhance your Evernote workflow. And with a free tier, MailButler is worth taking for a spin to see if it fits your needs.