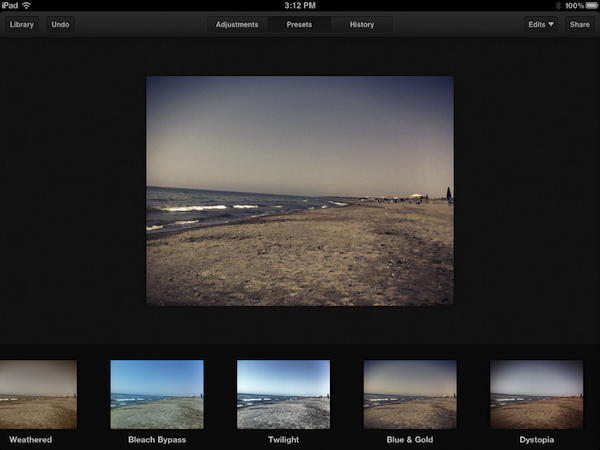 On the Mac, there’s no shortage of photo editors: from Aperture and Lightroom for those users who want more control over how their photos are processed and organized to more lightweight and user-friendly solutions like FX Photo Studio or The Iconfactory’s Flare, one can stay assured photos imported on a Mac will always find a proper companion app to be edited, sorted in collections, and shared online on Facebook or Flickr. On iOS, the situation is quite different: because the iPhone is a portable camera itself, there’s been a surge of apps like Instagram or Camera+, which allow users to shoot, edit, and upload photos using a single interface to do it all. Whereas the insanely successful Instagram has managed to gain millions of users because of its simple approach to lightweight photo editing and one-tap uploading, others apps like the aforementioned Camera+ or Camera Genius give users more options and functionalities such as advanced image filter adjustments, effects, and presets. And with iOS 5 on the horizon, it looks like developers of photo taking/editing apps for the iPhone and iPad will have even more tools and APIs to play with in order to natively integrate their software with new built-in image editing functions offered by iOS.

Being able to shoot a photo, quickly edit it and upload it in seconds from your iPhone is fine, but sometimes you want to sit down, check out all the photos you’ve taken, and take your time to process them, adjust them to your liking, and file them away onto a collection or social network of choice. That’s what desktop image editing tools are for – they give you the peace of mind to go through hundreds of photos without needing to quickly fire them off to your Instagram followers. You could argue that image editors are meant for a desktop computer (you sit down with your laptop, connect your camera, and start editing), but why avoid the fact that iPhones and iPads are powerful devices capable of doing just about anything nowadays? PhotoForge 2, an image editor I’ve reviewed before here on MacStories, proved that it’s possible to work with a full-featured image editing environment on iOS without feeling constrained by real screen estate and lack of mouse cursor.

Luminance, a new image editing app for the iPhone and iPad available at $0.99 on the App Store, provides a more streamlined alternative to PhotoForge and other image editors I’ve tried on iOS, offering an interesting set of effects, presets and basic versioning system that makes it easy to import photos from a device’s camera roll, and start editing in a focused space right away. 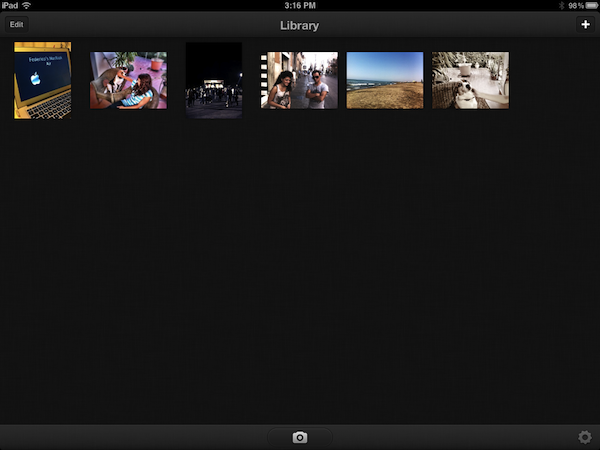 Luminance lets you import photos from your camera roll, or shoot new ones using the app’s camera button in the main screen. If you’re already running iOS 5 on your device, you’ll see that Luminance correctly recognizes Photo Stream albums, letting you import photos shared over the air with other devices connected to your iCloud account – which is quite handy if you often shoot photos with your iPhone, but prefer to edit them and share them using your iPad. Admittedly, the iPad version of Luminance benefits from the additional pixels and larger controls, making it easier to tweak layer adjustments and have a live preview of your photo at the same time. From the main screen of the app you can select multiple photos at once and share them on Facebook, email, or export them back to the camera roll – unfortunately, there’s no Twitter integration and you can’t select multiple photos for editing.

However, Luminance solves the problem of batch processing with the clever idea of “copy edits” and “paste edits”, which enable you to edit a photo and apply the same set of effects and adjustments to other files with two taps. So, Luminance won’t let you edit multiple photos at once by, say, splitting the screen in two, but it’ll make it extremely simple to take what you’ve done to a photo and carry it over to other ones. 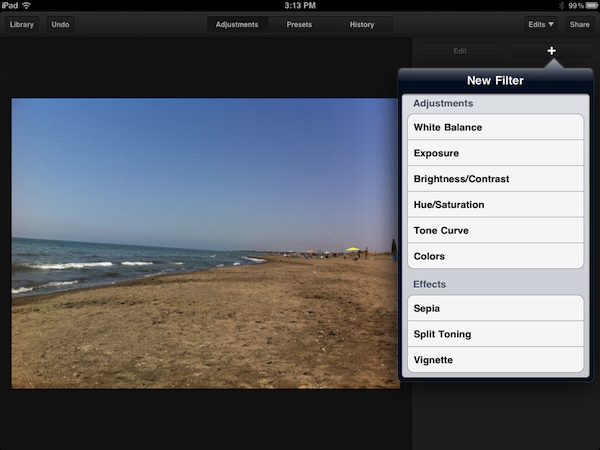 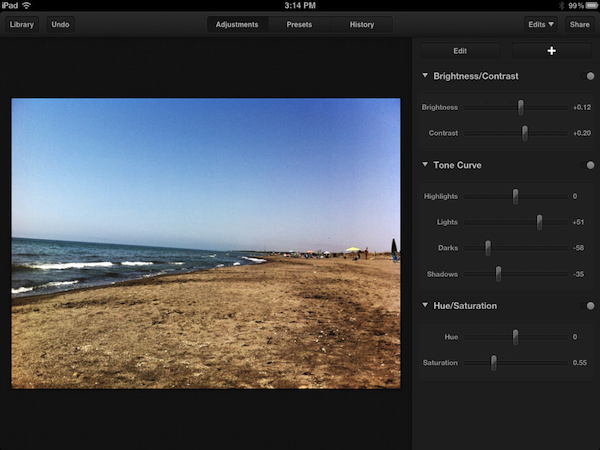 The actual editing part of Luminance is intuitive and focused on simplicity – you won’t find all the options available in PhotoForge here, but those that have been implemented are easy to use and accessible to any kind of user. When you tap on a photo, the app will bring it in the foreground, revealing three tabs along the top to apply presets, manually set adjustments, or browse a photo’s history. Presets are pretty self-explanatory: at the bottom, you’re given a few standard effects such as “cross process”, “black & white” or “antique” to choose from, and apply with one tap to a photo. If you don’t want to have your photos look like some default effects the developers built into the app, you can head over the Adjustments tab and start inserting new filters. The adjustments include the following options:

Each one of them can be tweaked with a slider, turned off altogether if you want to see how a photo looks like without it – you can even collapse or hide sections in the sidebar for better organization of filters and effects. 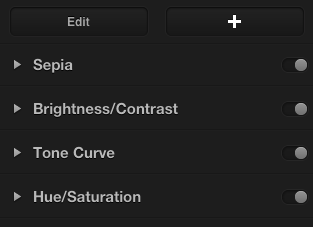 Filters can be rearranged to achieve different combinations, copied to be pasted onto another photo, or you can revert at any time to a previous version of a photo thanks to the History button, which keeps tracks of all the edits you make to a file and also lets you back to the original “import” state of a photo.

At $0.99 on the App Store, Luminance for iOS is too much of a good offer to ignore it. The app looks very nice both on the iPhone and iPad (though I feel more comfortable editing photos on the iPad), it’s stable and fast, it’s got nice animations when switching between effects and the library and, overall, it gets the job done if you need a simple way to edit your photos and save them back to the camera roll. Go download the app here.