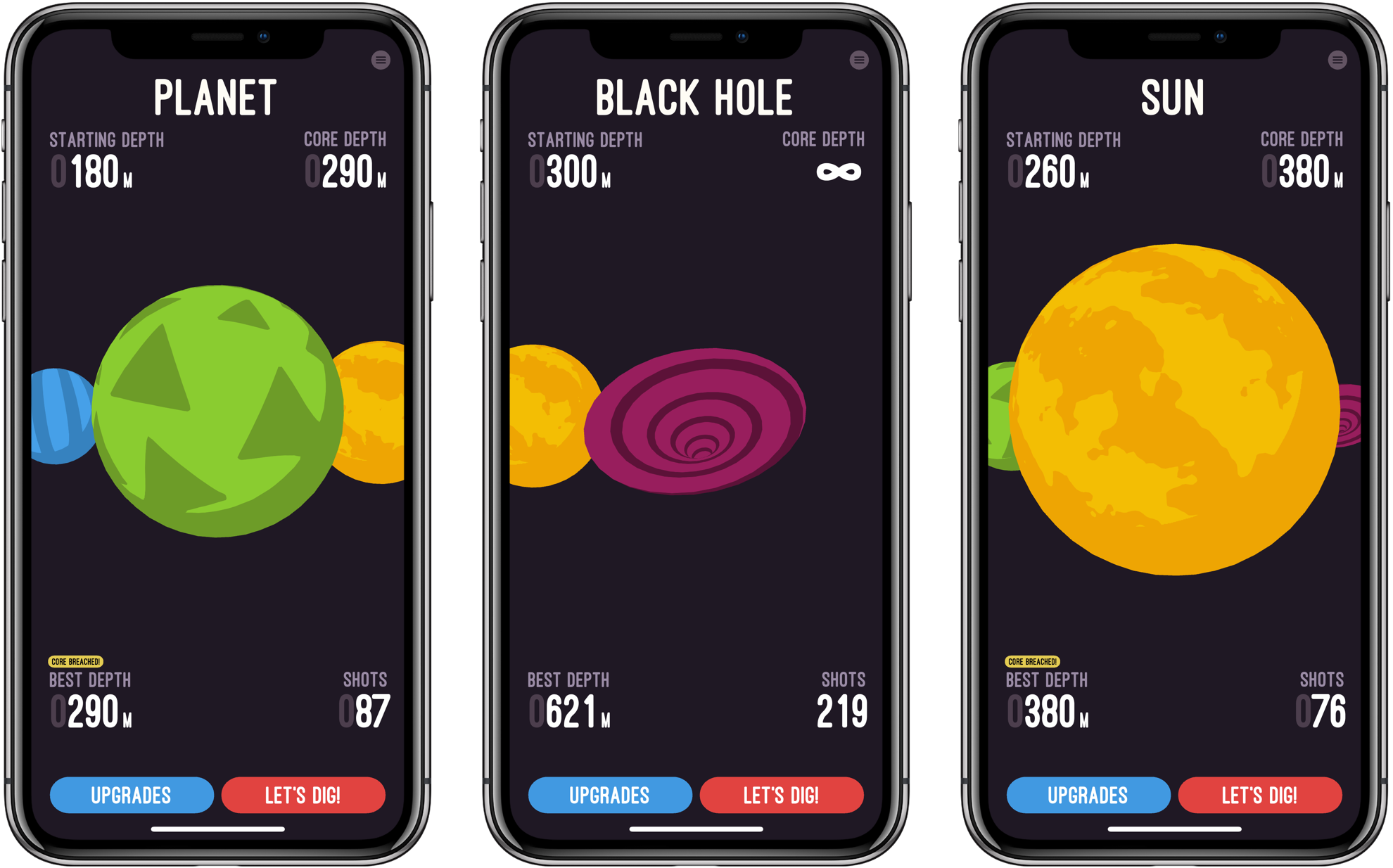 It’s not often that a game grabs me and won’t let go the way Holedown has. Once I started playing, I couldn’t stop. I have the iOS 12 Screen Time reports to prove it. Even when I’d burned through all of the game’s levels reaching the final endless one, I kept coming back for more. Holedown has very quickly earned a spot as one of my all-time favorite iOS games.

Like most great mobile games, Holedown is simple. The game is a little like Breakout turned upside-down with a dash of pinball added. Each level begins on the surface of a planet. The object is to bore a hole through to the planet’s core by launching balls that bounce off of obstacles that advance up the screen with each turn you take. If the obstacles reach the surface without being cleared, you have to start over and try again with a new procedurally-generated level. 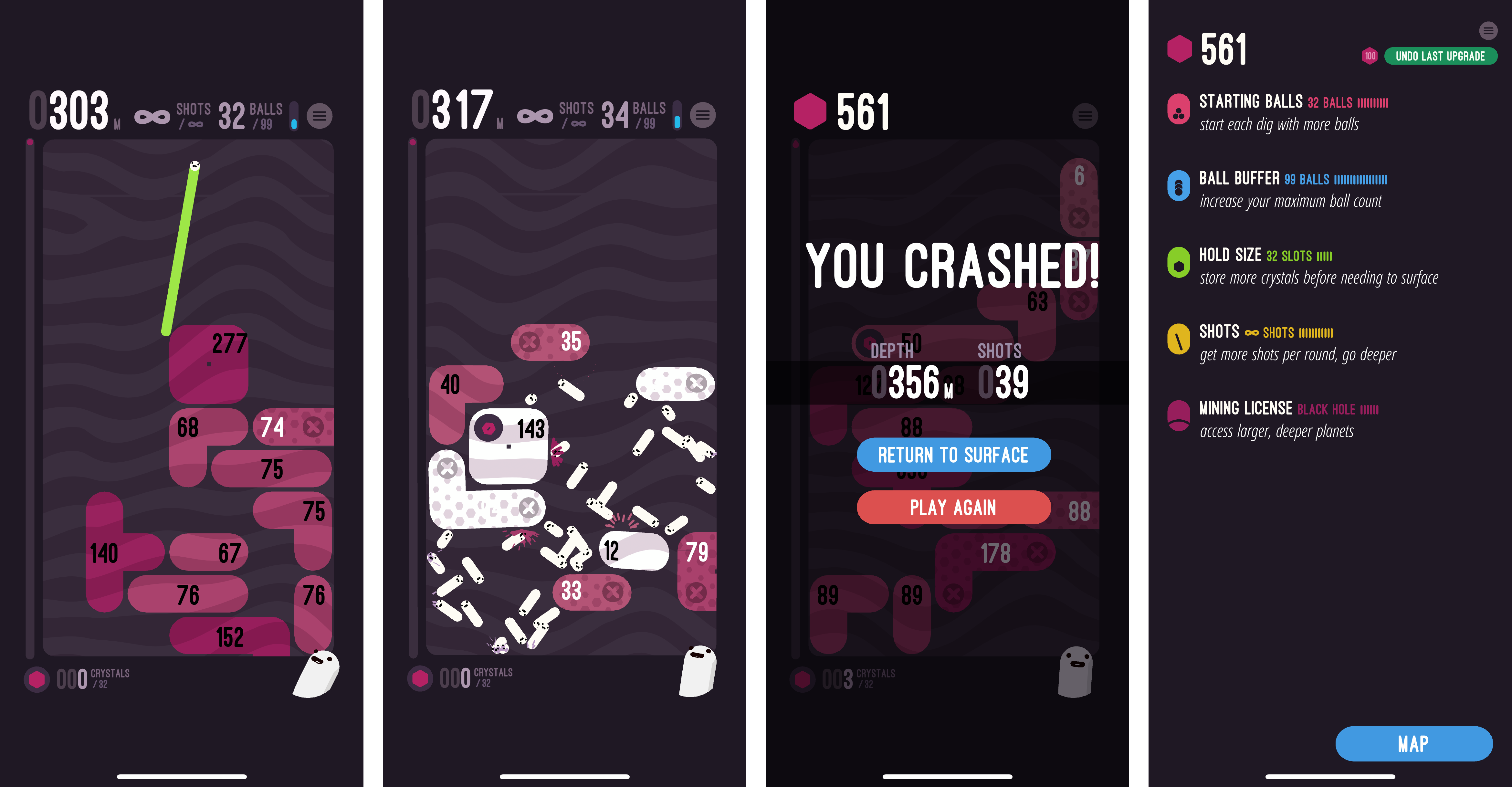 The obstacles moving up the screen are reminiscent of Tetris blocks, but each has a hit count that shows how many more ball collisions are necessary to take it out. Some blocks fall if the blocks supporting them are eliminated, but others have to be cleared regardless of the surrounding blocks.

As you play, you collect crystals. Holedown is a one-time, paid-up-front game, so the only way to collect the crystals is to play the game over and over. There is no In-App Purchase. As you collect crystals, they can be exchanged for enhanced gameplay like the ability to fire more balls at the start of each turn, take more shots per level, and more.

As you play, Holedown tracks the depth of your mine, your progress towards the core of the planet, how many balls you can shoot at one time, and how many shots you have left. It’s information that serves the dual purpose of showing where you are in the level and helping you plan your next move.

When you get to the final level, called the Black Hole, there is no core and you can shoot an unlimited number of balls at the obstacles. The only goal left is to see how deep you can mine before the blocks crash to the surface. I finished the other levels of Holedown over the course of a Saturday afternoon, and though I’ve been playing the Black Hole level for over a week now, the challenge of seeing how deep I can dig and the perfectly balanced gameplay have keep me coming back over and over.

Holedown also benefits from a strong dose of quirky personality. There’s a little mascot that sits in the corner of the screen smiling and watching you play. If you tap it, the little creature responds with things like ‘eat your vegetables,’ ‘seize the means of production,’ and ‘work, work.’

The music plays a big role in Holedown’s feel too. The catchy electronic soundtrack pairs perfectly with the sound effects, both of which react to events in the game, which adds further life to the gameplay.

Holedown is a perfect example of a well-designed mobile game. Even if you’re deep into a long session, you can quit at any time and pick up where you left off later without losing any progress. Combined with the quirky, fun gameplay, it’s one of the hardest games to put down that I’ve ever played on iOS. If you haven’t tried it yet, Holedown should be at the top of your must-play-games list.

Holedown is available on the App Store for $3.99.