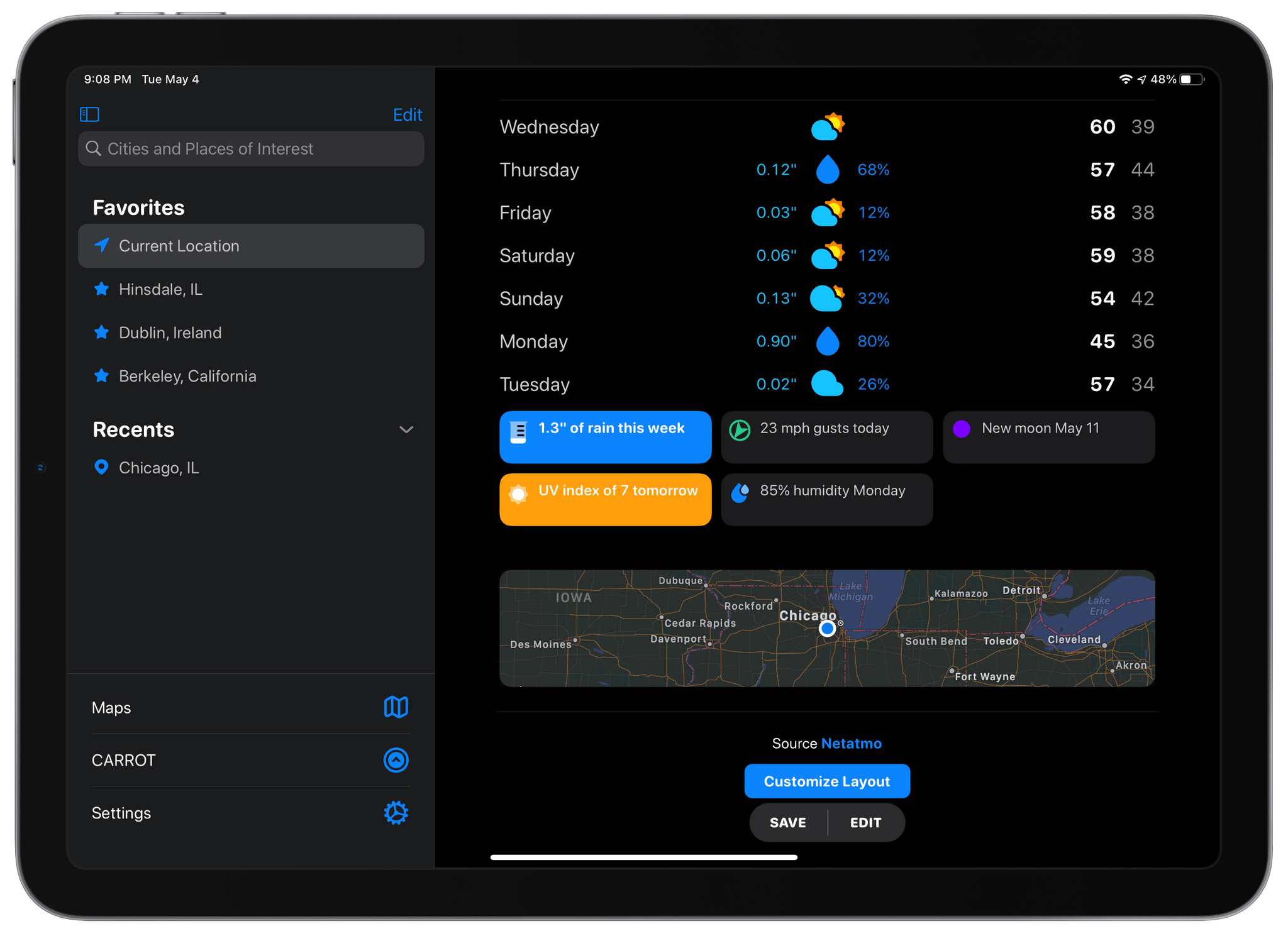 When CARROT Weather 5 was released in January, it became one of the most highly-customizable apps available on the iPhone, iPad, and Apple Watch. With that came a level of complexity that required a bit of a learning curve. With a bit of experimentation and the progressive unlocking of customizations, though, I thought version 5’s layout features were manageable. However, with the update released today, developer Brian Mueller has overhauled CARROT Weather’s layout functionality making it easier to get started and faster to build a personalized weather dashboard than ever before. 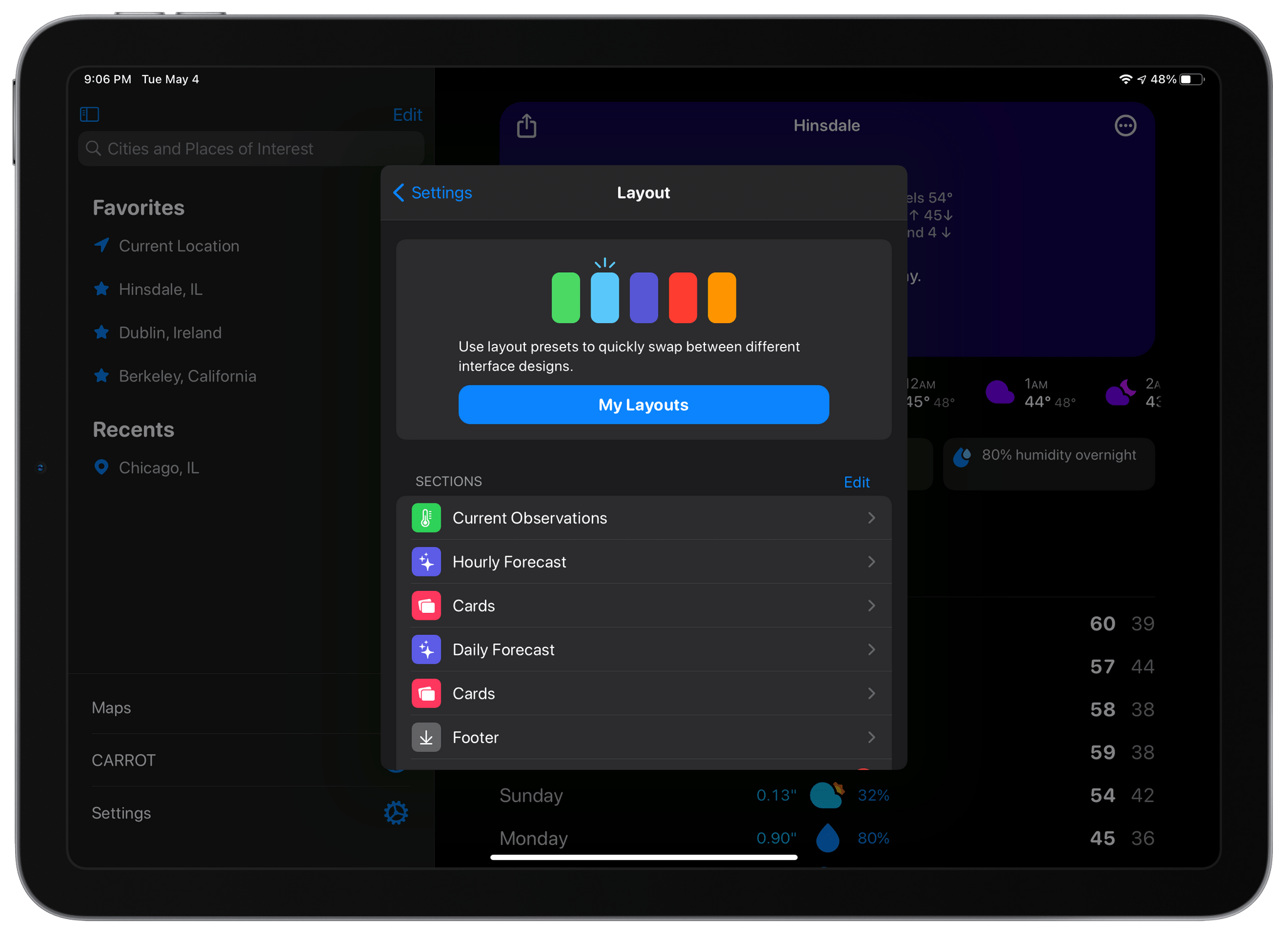 The Layout section of CARROT Weather’s settings is where you choose from layout templates and add individual data components called Sections.

The app’s settings include a new group of related items: Layout, Display, and App Icon, the first two of which are new. Layout replaces Customization and is divided into preset layouts and sections that can be added to the app’s main view. Layout presets, like Odin, Siren, and Chronos, are a great place to start when planning your CARROT Weather layout. You can preview any that you aren’t using, which takes your data settings and applies it to the new preset, so you can see how it would look. From the preview, you can tap ‘Set’ to begin using the new theme or ‘Cancel’ to return to the app’s Layout settings to make more adjustments. 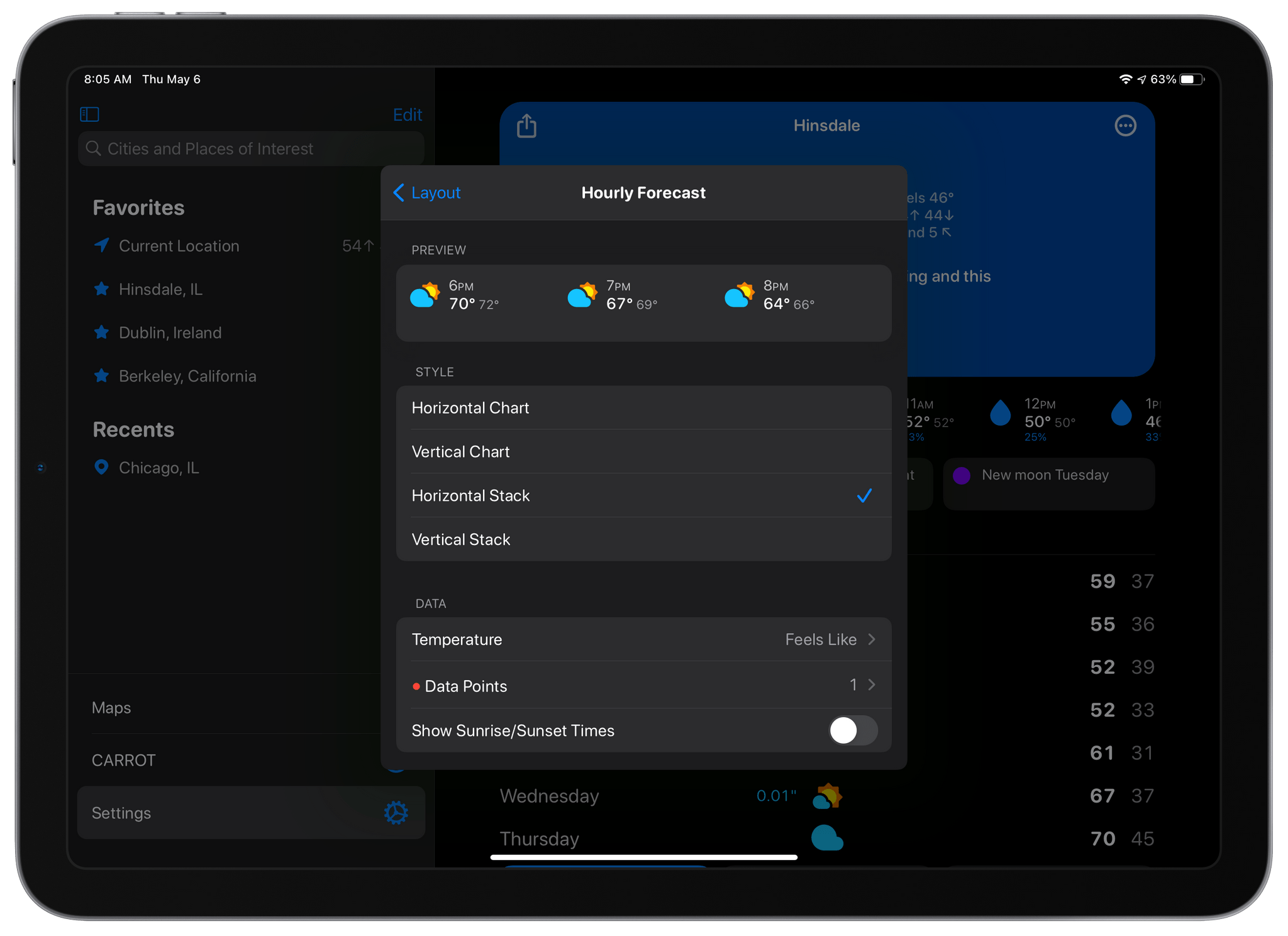 The settings for each section now includes previews of what that section will look like before you add it to your layout.

The Sections part of Layout is where you pick and customize the individual data components for your layout. The big change here is that at the top of each section’s individual settings is a preview of what it will look like based on the options you’ve chosen. It’s a big improvement because it eliminates the guessing about what each change will look like before you add the section. Together with the Layout previews, the new Sections picker short-circuits the trial and error loop of version 5.0, making it much faster to design the perfect weather dashboard. 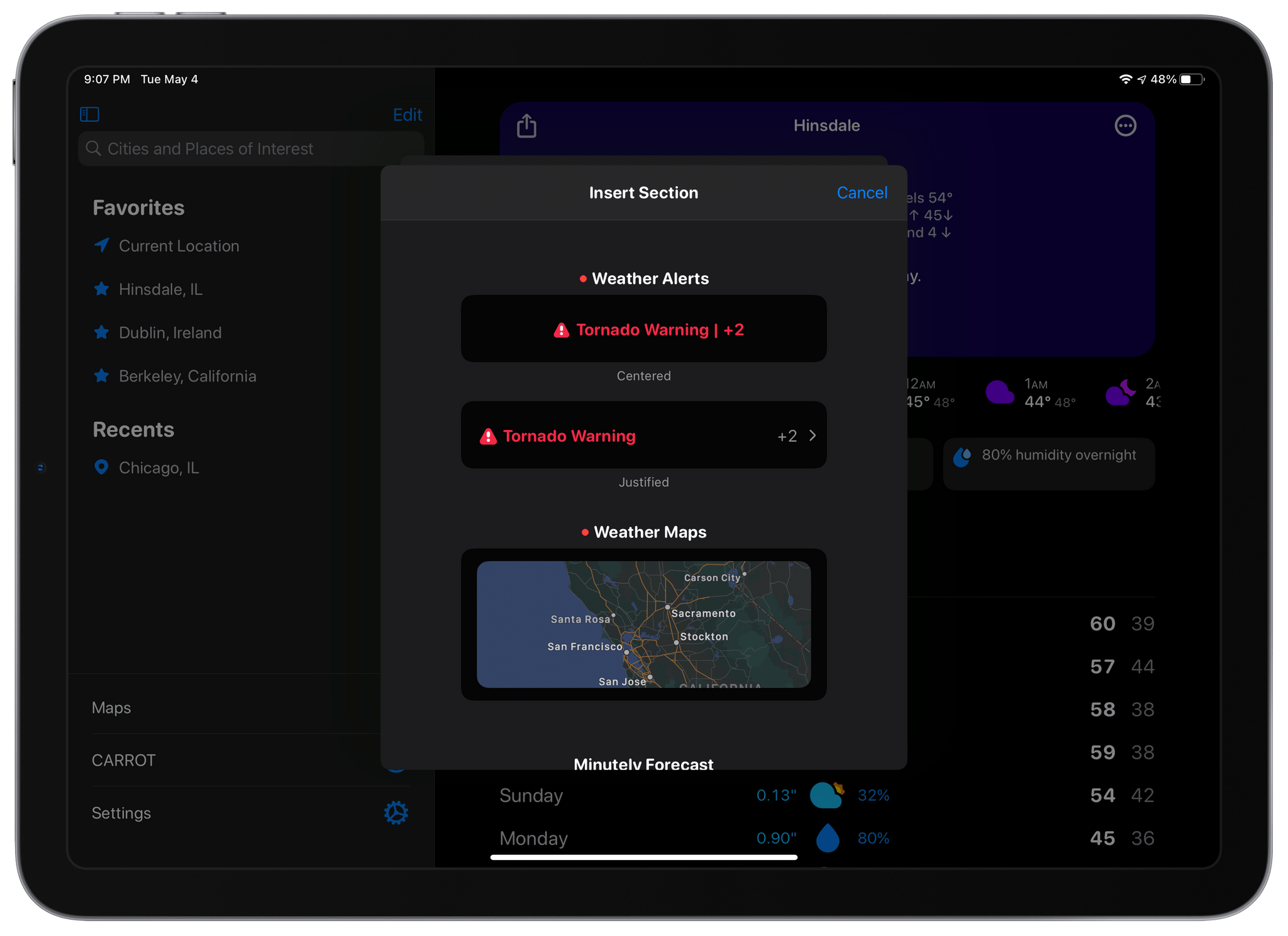 CARROT Weather has added a couple of new sections too. The first, which is exclusive to Premium Ultra subscribers, is a Weather Maps section that allows you to add weather radar to your dashboard. You can add multiple layers of data to the map, pick from three different sizes and zoom levels, and choose a handful of additional style and appearance settings, all of which are previewed for you at the top of the screen. There’s also a new alerts section that can be added to notify you of severe weather and other unusual conditions, as well as new tide data available in certain existing sections. Finally, you can adjust the text size and pick among multiple font choices in the new Display section of the app’s settings.

When CARROT Weather 5.0 came out, I spent some time coming up with a layout that I liked, and I never touched it again. It’s not like I spent hours trying every possible combination to come up with something that I liked, but there was enough trial and error involved that I didn’t feel like testing out anything else after that initial setup. With the new layout system, that has changed. Tweaking the size of sections and their layout is much faster with the new previews, making experimenting easier. As a result, I’ve tweaked my hourly view a little, added a Map section, and modified the data reported by a couple of other sections. The changes weren’t drastic, but it’s even better now, which I love. If you haven’t played with CARROT Weather’s customization options in a while, now is definitely the time to do so.

CARROT Weather is available as a free update on the App Store and offers multiple subscription tiers for its more advanced, data-rich features.