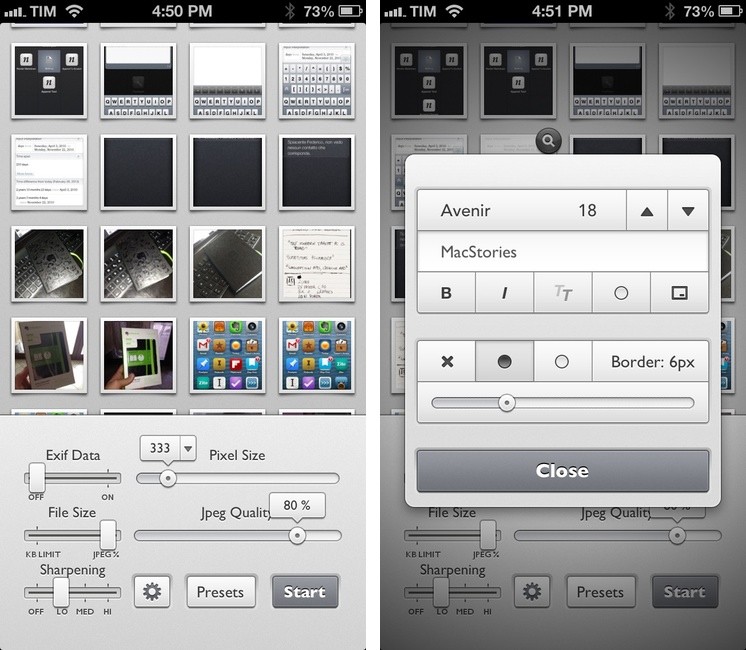 I deal with two types of images on my iOS devices: photos and screenshots.

For photos, I’ve long settled on a Dropbox-based workflow that takes care of automatically archiving and sorting photos for me. For screenshots, the story is a bit more complicated.

For months, I used OneEdit, an iPhone/iPad app to batch resize images from the Camera Roll; OneEdit comes with a lot of features, including presets, Dropbox sharing, and FTP uploads. The downside is that the app’s interface is clunky and convoluted, with seemingly no intention from the developer to update it. In spite of that, however, I kept using OneEdit to resize multiple screenshots at once, save them to the Camera Roll, fire up Diet Coda, and move them to our FTP server. When we decided to move 4 years of image uploads off the FTP and onto a CDN (alongside new uploads on a daily basis), I asked our Don Southard to create a Hazel script that would monitor Dropbox for screenshots and upload them to the CDN. This is what I’ve been using in combination with some Pythonista scripts that would resize screenshots for me.

My iOS screenshot workflow is faster thanks to Pythonista and the Hazel script running on the Mac mini, but I miss the possibility of having a single app capable of batch resizing and uploading images to Rackspace Cloud Files.1 The latest Pythonista update made things dramatically better with the Photos module, but I still can’t pick multiple photos at once (and, obviously, I still have to deal with Python).

My “ideal” batch resizing photo app for iOS would excel in two different aspects: it would be Universal and have an elegant interface to pick multiple photos at once to batch resize them with presets; it would come with a plethora of sharing options built-in, including Cloud Files and SFTP support. Reduce is close to excellence when it comes to the first one.

Developed by Tobias Wiedenmann, Reduce is a $1.99 Universal app to batch resize images with presets. It doesn’t have any sharing option and the only location where it can save new images is the Camera Roll.2 Reduce starts with a page showing available iOS albums as stacks of photos; tap on one, and the stack expands to reveal the photos inside it, displayed in a grid with the newest ones on top (a nice touch). The album animation immediately shows one area where I believe Reduce could be better: animations feel a bit slow. Opening and closing albums, enlarging previews, opening menus – the animations aren’t terribly slow, but there’s something off about them.

Reduce can resize images as well as decrease their quality to make them more suitable for mobile uploads/sharing. You can strip Exif data off an image, determine its file size by KB or JPEG quality, and turn on sharpening when resizing an image. JPEG quality can be adjusted with a slider in 10% increments, and pixel size can be determined with a popup menu that lets you specify absolute height/width values or a more generic shorter/longer side in pixels.

You can also add text watermarks when resizing images. Reduce comes with 15 different fonts, 2 formatting options (bold and italic), 4 opacity settings, 2 font colors, 4 watermark placement options, and 2 border types. It’s a nice addition on top of the main resizing features, but I think it’s too limited, especially in the font and color departments (I wouldn’t expect the app to let you load your own fonts, but iOS 6 can do better). 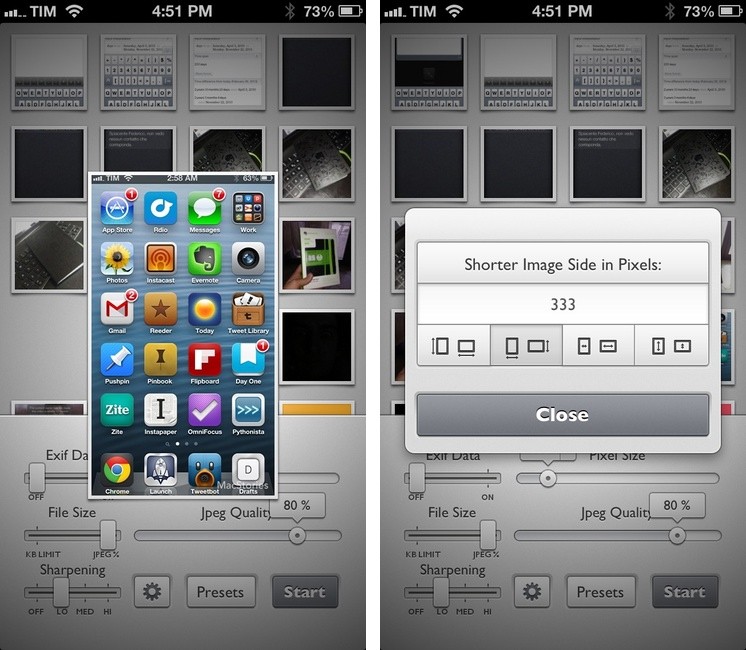 Images that have been selected and resized (using the Start button) are saved into the Camera Roll as new files. There are no renaming options, as you wouldn’t see filenames on iOS anyway. The execution of the resizing process is fast and shown with a progress bar inside a modal dialog.

I see three main problems with Reduce: the aforementioned slow animations (especially visible when opening the Presets/Watermark dialogs); lack of sharing options; and, the fact that many interface elements are “too close” to each other or “too small”. Reduce employs a very custom UI, which I don’t mind, per se. But some elements of that interface, such as zoom buttons, dropdown menus, or arrows to increase/decrease font size are too small to be selected comfortably without missing the target or accidentally triggering another button. It doesn’t happen often, but when it does, it’s annoying.

Reduce isn’t perfect and there’s room for improvement in several areas of the user experience and interface design. However, once you have set up some presets, the speed and simplicity of the app to save multiple images back to the Camera Roll is indisputable. When it comes to simply fetching Camera Roll images and saving them at a smaller size, I prefer Reduce to OneEdit and my own Pythonista script (which, unsurprisingly, is what I use to upload photos after they have been resized). I would also recommend Reduce to users who want to batch resize images before sending them to Dropbox, edit them in iPhoto, or open them in Photoshop Touch or other image editing apps. I like Reduce for batch resizing multiple screenshots at once, and I wish it’ll gain standard and “more advanced” sharing options in the future.3