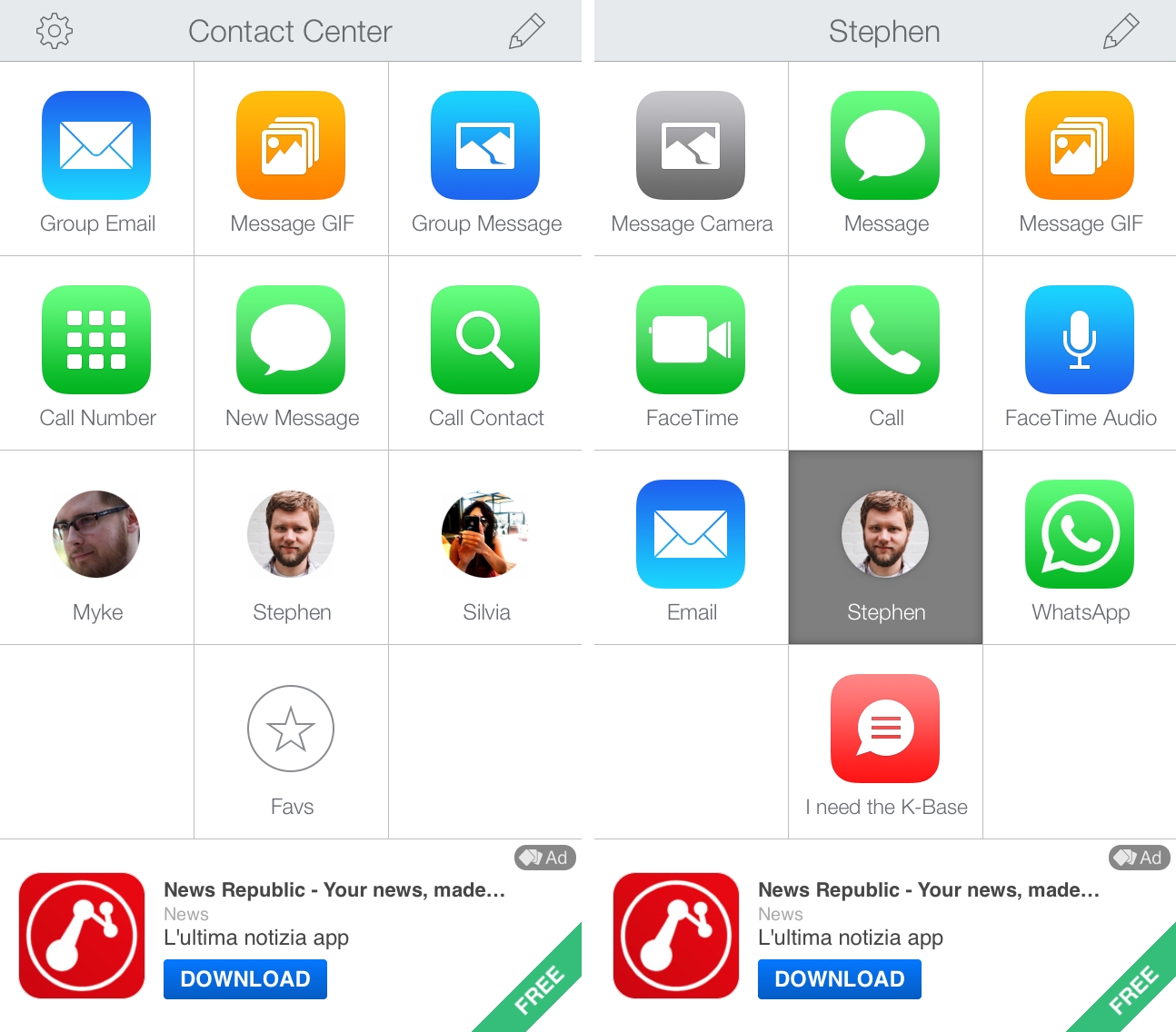 Over the years, I’ve documented the evolution of Launch Center Pro from innovative shortcut launcher to powerhouse of iOS automation. Launch Center Pro helped popularize the concept of URL schemes and chaining multiple apps together, finding its own niche in iPhone (and, later, iPad) users who wanted to get more done on iOS with less taps. We’ve written dozens of posts on advanced Launch Center Pro techniques and even published a full-featured guide. And yet, in spite of the abundance of coverage, we often get the “How do I learn Launch Center Pro?” question; occasionally, I also try to explain the power of Launch Center Pro to my friends, but a single URL scheme is enough to scare them away.

Contact Center takes one of the most popular aspects of Launch Center Pro – being a speed dial for your favorite contacts – and completely abstracts URL schemes and manual app integrations from the experience. The app (mostly) looks and behaves exactly like Launch Center Pro, but you will never see URL schemes, use variable tags, or chain apps together. Contact Center is free with an unobtrusive ad displayed at the bottom of the grid; if you want to unlock those three extra slots covered by the ad, you pay $2.99 to the remove ads with an In-App Purchase. You won’t find hundreds of third-party apps, complex Dropbox workflows, or other automated chains of actions in the app: rather, you’ll be greeted with templates for messages and WhatsApp, a phone dialer, FaceTime shortcuts, and other contact icons.

Contact Center is Launch Center Pro slimmed down to its contact-related features, but Contrast managed to tweak a few core design details and user interactions to optimize the app’s experience for its standalone nature.

When setting up Contact Center for the first time, the app will ask you to pick favorite contacts you’d like quick access to. With this interactive onboarding process, the app can generate an initial Home screen on the fly, which is a superior alternative to inserting default actions that haven’t been truly personalized for a user’s needs. Actions generated from favorites will carry contact names and profile pictures, helping a Contact Center grid feel immediately personal, contextual, and useful. Launch Center Pro can’t perform this sort of interactive setup because the app can’t scan an iOS device for every installed app, but Contact Center can.

Similarly, I appreciate some of the tweaks that have been applied to simplify the app’s Home screen. Unlike Launch Center Pro, Contact Center features tap-to-open and tap-to-close for folders, which is more intuitive than Launch Center Pro’s tap-and-swipe mechanism. Folders can be created as empty containers, or you can quickly create a “folder from contact”, which is my favorite little touch of the app: if you know you’ll want to group a bunch of shortcuts for the same contact together, this option will let you pick a contact and it’ll create a folder using a contact’s profile picture as icon, pre-populating the folder with actions to send photos, call, send an email, or call with FaceTime. And because Contact Center wants to be as accessible as possible, you won’t have to type out variables manually in the app: rather, each macro is explained in plain English with names such as “predefined text” or “ask each time”.

Contact Center is Launch Center Pro under the hood, optimized for contacts and without the overhead and intrinsic complexity of Contrast’s premier automation utility. Contact Center wants to remove friction from the idea that shortcuts could help iOS users save time on a daily basis, but to do so Contrast had to reduce Launch Center Pro’s feature to contacts – a more palatable concept for a larger audience.

While Contact Center may not have a place in my dock because I rely on my Launch Center Pro setup, I think it’s a good idea for the App Store with a fair balance of features and ads. Contrast can only benefit from Contact Center introducing more people to automated actions on iOS, and the choice of contacts rather than productivity makes the app approachable and understandable.

Contact Center is available for free on the App Store.