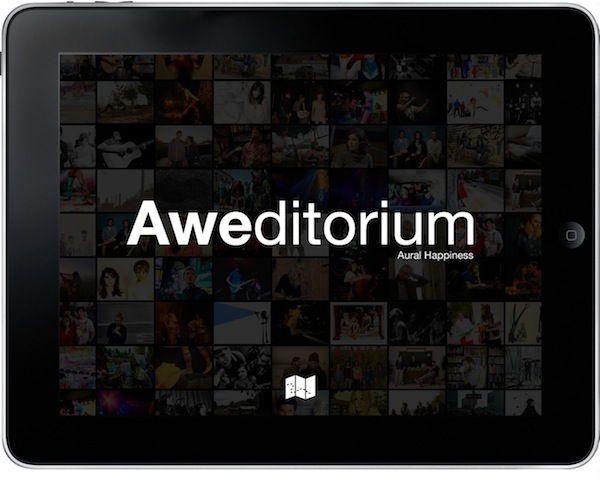 It’s great when you wake up and you find an awesome new app waiting for you in the App Store. You see, I’ve been keeping an eye on Aweditorium for a while (months, I believe) since Robert Scoble first tweeted he had tested an early demo. The name was cool, the website featured some bands I didn’t know. I was intrigued, so I started following the developers on Twitter.

Aweditorium is now available in the App Store, and it’s more than I thought it would be – but it’s got a few technical limitations I hope will be addressed in future updates. Aweditorium aims at changing rules and conventions, but it has to deal with some iOS restrictions and a few bugs I’m pretty sure are caused by iOS 4.2 incompatibilities. The main concept, however, is all there: Aweditorium wants to change the way you discover great new music on the iPad.

From my understanding, Aweditorium is based on thesixtyone’s music database, which features indie / signed bands and artists from all over the world – but mostly the U.S. and UK. The app isn’t a simple web view wrapped up in some Cocoa interface, it’s an entirely native application with standard iOS gesture controls and feel. When you fire it up, it takes a few seconds to load all the artists thumbnails arranged in a grid view that kind of reminds me of Flipboard. Indeed, this might be one of the most innovative apps for the iPad since Flipboard came out this summer. I don’t know why the app takes a few seconds to start, maybe it’s because of my slow network or maybe the developers’ servers are simply having a bad time dealing with the load of new users. Once the grid is ready, it’s time to explore.

So you have all these thumbnails on this digital grid / map, and you can tap around to load a specific song from a band you likely don’t know about. If you do know the artist, the experience is great nonetheless. This is the idea behind Aweditorium: you can listen to songs, byt why limiting the experience to just listening to something? Let’s put some additional information in there, and let’s forget about mimicking real-life objects. Let’s make it all be proud of being digital, meant for the iPad. And so you have animated popups with artists details, picture-in-picture interviews with the band, possibility to share songs on Twitter and Facebook, a popover with “other songs from the artist”, a HD button to enjoy a high def version of the song on Youtube. It’s a lot of stuff to play with. Oh, and let’s not forget about the on-screen lyrics.

Aweditorium is a rich music experience that feels great on the iPad. 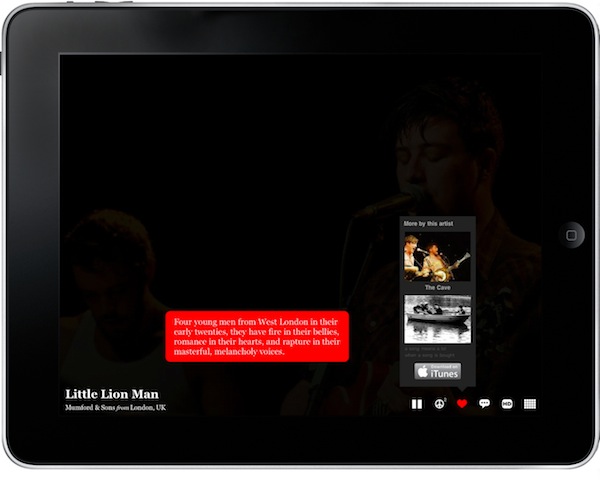 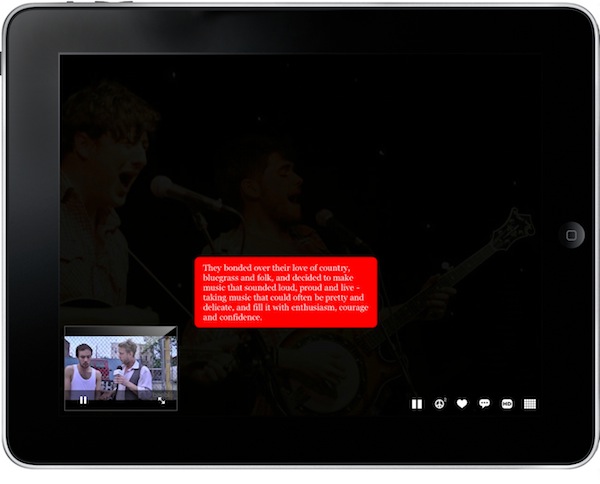 My main gripe with the app is that it doesn’t use iOS’ standard media controls, which means audio won’t keep playing in the background when you close the app, nor does Aweditorium’s icon show up in the multitasking tray. Actually, the app doesn’t support multitasking at all in the current version. Plus, I’ve encountered a few issues when opening multiple popups at once or trying to go back to the grid view with a pinch gesture.

Aweditorium is one of those apps that can’t be described, you just have to try it. It’s free, so I don’t see why you shouldn’t. Aweditorium wants to revolutionize the way you find out about great new music you might like, but I’m looking forward to further iOS integration in the future. I want the background audio, so I hope the developers will find a way to implement it. But as I think about it, I also have the feeling Aweditorium isn’t a simple app to open and leave in the background – you gotta look at it. So maybe I’m wrong, the app doesn’t need advanced multitasking features at all. We’ll see.

Even more than multitasking, I’m looking forward to deep social graph integration within the app. Now that’d be huge. As of right now, Aweditorium is just the music app you have to download. I think it’s enough for a first version.

Update: Check out Robert Scoble’s review of the app here. We’ve also embedded his interview / demo video with the developers below.