As developers put the finishing touches to their iOS 5 and iCloud-based new apps and updates, this past week has been relatively slow in noteworthy App Store releases and features. Fortunately, I’ve dug up some gems worth mentioning, and I’ve been playing with the amazing If This Then That, now out of beta and open to the public.

Stay tuned for more App Journal episodes in the next weeks.

I was a little skeptical when I first heard about Dolphin Browser for iPad, a port of what appears to be a fairly popular browser for Android devices. Furthermore, the app is free, and I always wonder how it’s going to play out in the long term without a business plan. Still, I have to say Dolphin Browser is pretty good. Mind you, it’s no Grazing, but I was surprised to see two features cleverly implemented: gestures, and the “webzine”. With gesture support, you can assign any URL to a custom gesture you have to “draw” so you’ll be able to launch your favorite websites by simply performing the gesture on screen. There’s a set of built-in gestures for Facebook, Twitter, and other websites, but you can create as many as you want by opening a new URL, and choose “gesture for this page”. A new window will open, asking you to draw the shape with a single stroke – after that, the gesture will be assigned to the URL and saved in the Gestures area of the app. Gesture recognition is pretty good, and you don’t have to be an artist or get really precise down to the pixel for the app to see what you want to launch. Overall, it’s a quite clever idea that, however, might use a more universal access without having to open a dedicated Gestures overlay (I’d like to draw directly on the webpage, if that makes sense). 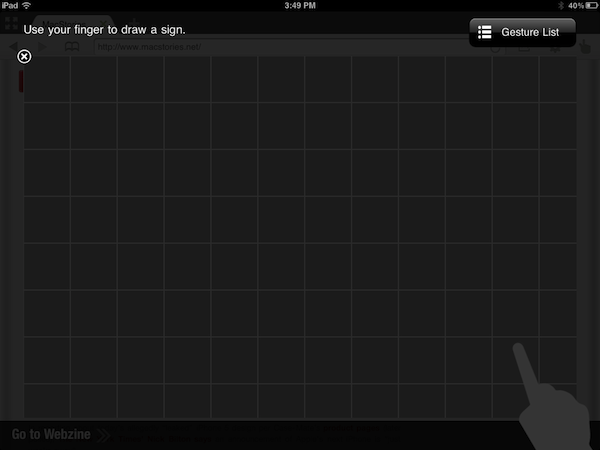 Second is the webzine, basically a Flipboard-like magazine interface that, however, resides right within the browser and not in a standalone app. Dolphin’s main page, in fact, lists a series of speed dials on the left (think frequently accessed websites) and the “webzine” on the right, pre-populated with blogs you might want to read in a more uncluttered fashion. The thing with the webzine in Dolphin is that you’re not really forced to open this “start page” every time – once you visit a blog, say MacStories, Dolphin will ask you if you want to read it through the webzine UI. When a website gets passed through the webzine, a nice and fluid animation brings text in the foreground with articles and images as big squares – again, it resembles Flipboard. 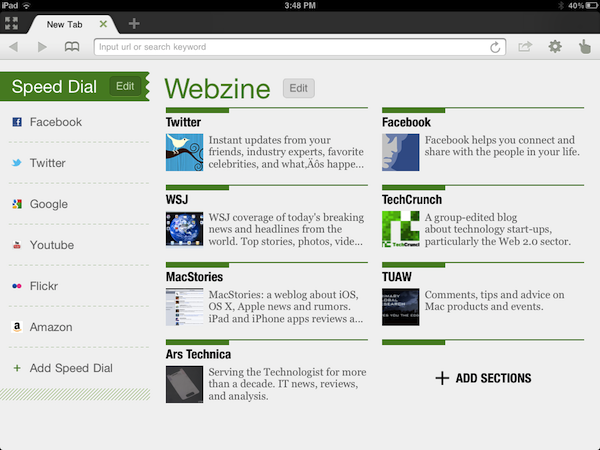 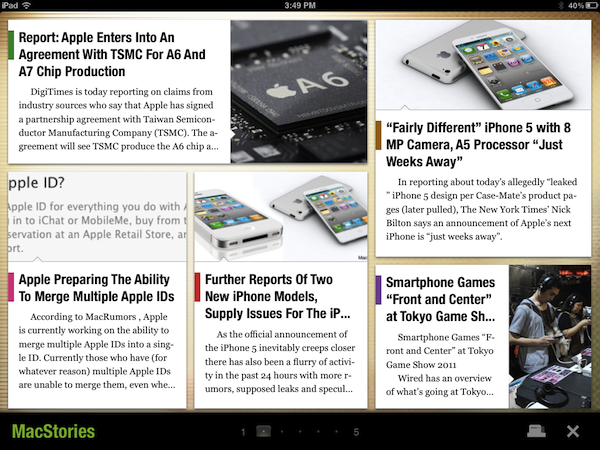 The big difference is that Dolphin’s webzine doesn’t fetch entire articles and images – the actual webpage is loaded behind the webzine page, and you can jump to it (to see the rest of a story, images, or videos) with a single tap. It’s still unclear to me whether Dolphin’s webzine fetches articles via RSS (I assume it does), but I find it surprising the developers didn’t implement a refresh button (just last night I was reading MacStories through the webzine, and two articles I had just posted weren’t showing up).

Dolphin is a decent browser for the iPad with two really neat functionalities. You won’t find the “power user” aspect of Grazing and iCab in here (Dolphin doesn’t even have contextual menus for links), but overall, it’s a good free browser. Get it here.

Showreel does one thing well, with a beautiful design. There are many apps to check out the latest movie trailers and releases, but none of them has the same attention to detail and “focus” as Showreel, released earlier this week on the App Store. As you launch the app, you’re presented with high-res illustrations for movies as the background, a poster on the left, a glowing “Play Trailer” button in the upper right hand corner, and a bar with “movie thumbnails” along the bottom. You can scroll through movies either by tapping on the thumbnails, or swiping on the main content area. 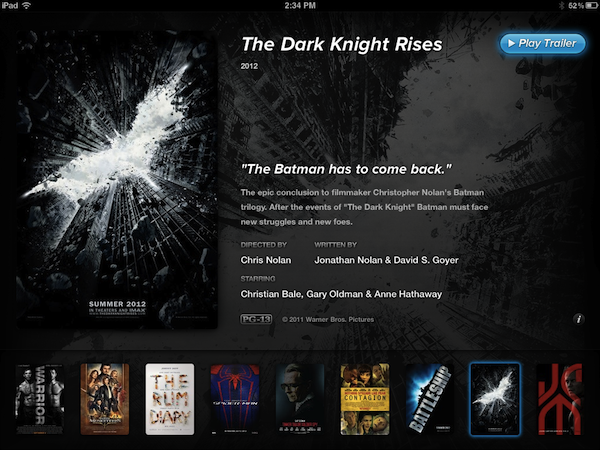 I like Showreel because it’s fast, elegant (each movie has its own photo background, description, release date, and basic cast information) and it streams high-quality 720p trailers directly on my iPad.

This iPhone app / web service is one that I was really looking forward to. I remember talking to the developer in the early stages of brainstorming last year, and I’m happy to see the final product close to what I expected it to be. Faveous aggregates your “favorite” items from the web: be them favorite tweets, “liked” YouTube videos, starred Google Reader items – Faveous will import them in one single place for you to check them out whenever you want. Faveous is an “aggregator” in that it relies on authentication methods such as OAuth and RSS feeds to get your favorite items from a variety of online sources. Furthermore, Faveous can generate an RSS feed for your account, which means you can then add this feed into your Google Reader, and browse all your favorite entries in, say, an app like Flipboard. 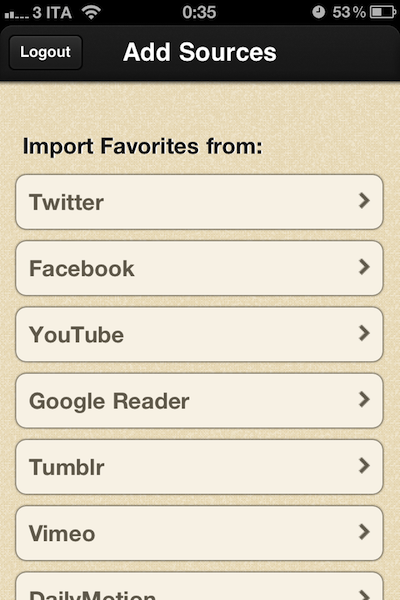 Faveous has a web app and an iPhone app, free on the App Store. There’s no iPad client yet, and I believe Faveous would be just perfect on the iPad for those times when you want to relax on the couch, and see all the articles, videos and images you saved throughout the day. Faveous for iPhone has a few issues on the iOS 5 beta (which is normal, you shouldn’t expect developers to support a beta OS until it’s out), but overall it’s a solid first version with a nice interface design. You can refresh sources to check for new favorite items, navigate between services with an “icon bar” at the top, and subscribe to new feeds directly within the app. It’s not perfect, but it’s a good mobile companion to the web app.

Free on the App Store.

ifttt stands for “If This Then That” and it’s a new service that leverages the power of web APIs to bring interconnectedness between web apps that are usually separate from each other. Or, as the company’s slogan says, “Put the internet to work for you”. ifttt is the coolest thing to happen to web apps since the rise of APIs: it lets third-party services interact with each others in ways that weren’t possible before, to achieve automated workflows that can be combined in thousands of different ways.

Think “Automator for the web” or “programming without code”.

The “this” and “that” parts of ifttt are called “channels”, and they’re basically a list of third-party services and websites that the developers support. The list includes names like Twitter, Facebook, Dropbox, Evernote, Google Reader – just take a look here. The “ifs” and “thens”, on the other hand, are the actual actions that ifttt can perform, and when mixed with channels they generate what ifttt calls a “task” or, if you decide to share it publicly, a “recipe”. A task is tied to your personal accounts: with the examples above, you’ll have to log in with your Evernote and Twitter accounts, then put together a workflow to backup tweets (as text or links – you decide) into the Evernote notebook of your choice. And that’s your task. A recipe is just the basic outline of a task that doesn’t include your personal information, so it can be shared with anyone for inspiration. If you browse the Recipes section on ifttt, you can see how people are sharing ideas and pre-made workflows to better automate the web and get the most out of APIs.

There’s plenty of ideas to play with: automatically backup Instagram photos to Dropbox; save RSS entries to an Evernote notebook; get alerted with a text message when it’s going to rain; automatically post loved tracks from Last.fm on Facebook. Here’s what I’ve been automating with ifttt so far: 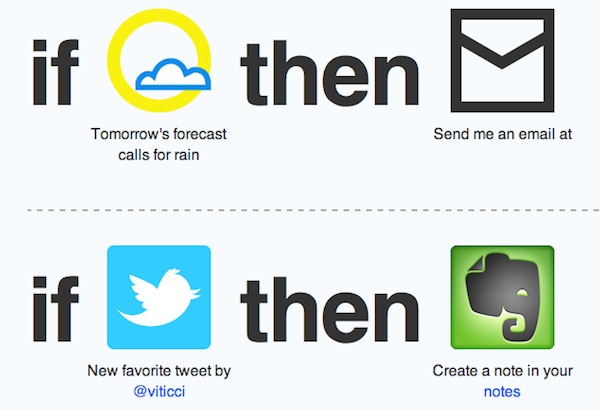 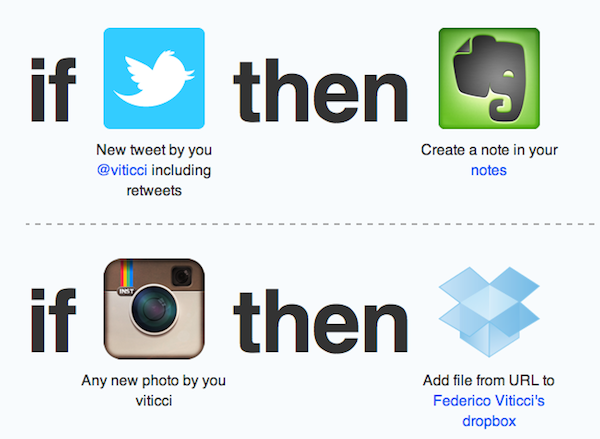 ifttt is still in “beta”, but it’s stable and fast (tasks usually take 5 minutes to complete). I would certainly pay for a Pro service in the future to get access to more channels, actions and faster trigger times – ifttt seems like the perfect web service to monetize with more features and a faster infrastructure for Pro users. Right now, ifttt is the web service to try out. Perfect for some fiddling over the weekend (and invisible automation through the week).