For this week’s App Journal episode, I’m taking a look at four iOS apps: Boxee for iPad, Writing Kit, Notesy and Note & Share. You may notice three of them are note-taking apps – in fact, I’ve been playing with several apps of this kind recently, and have yet to decide which one suits better my writing workflow when it comes to quick notes for, say, Dropbox, or longer pieces written in Markdown.

Stay tuned for more App Journal episodes in the next weeks.

I’ve been considering Boxee as an alternative to Plex for my media center needs, and I was curious to try out the iPad app when it was released earlier this summer. As it turns out, unlike Plex Boxee is heavily focused on providing a hardware solution to bring the Internet (as in TV shows, social streams, free online video) to your television – the Boxee box, which I didn’t want to purchase only to try out the app.  Boxee, however, offers a desktop application for Mac and Windows as well, and a media manager utility to configure with the iPad app if you want to access content stored on your computer. Sounds convoluted, but once you’ve created an online account and downloaded the apps, everything’s fairly easy and intuitive.

With the Boxee iPad app, I took in consideration the web aspect of the service, and the Mac media manager, which is used to “stream” content from OS X  to iOS pretty much like Air Video and Plex work. The media manager has got a very simple interface that allows you to pick folders on your Mac (or connected external drive) and choose what content to make available for the iPad app, which will recognize Boxee’s media manager on a local network. As I started playing around with it, I immediately noticed two major caveats: the media manager doesn’t support hardware acceleration, and it only works with videos. That means – again, unlike Plex – you won’t have super-smooth playback of videos thanks to hardware decoding and your music collection won’t play in Boxee for iPad (the folders in the media manager UI will result as empty). Movies played fine when streamed from Boxee’s media manager to the iPad app, but you can tell the difference between Boxee’s technology and Plex. The media manager has also got a feature to access it remotely from a desktop browser outside your local network, but I haven’t been able to test this. 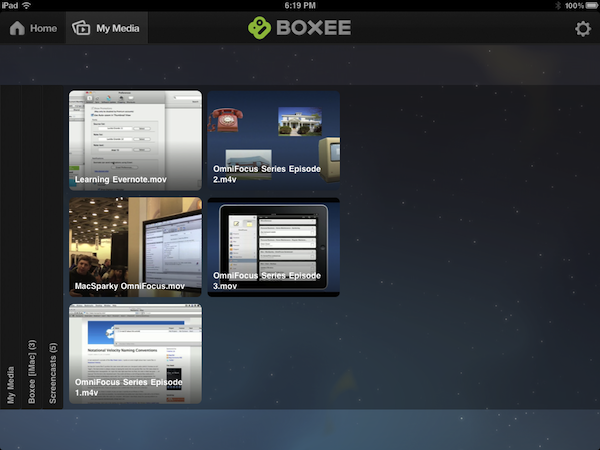 Boxee says their iPad app “takes the work out of finding, viewing, and sharing online video, so you can watch what you want, when you want, without having to think about it.”. Indeed, when trying the app I really enjoyed using the “watch later” functionality, which through a bookmarklet (think Instapaper for videos) allows you to save videos for later so you can watch them on Boxee’s iPad app. It sounds very similar to Watchlater for iPad, but it’s nice to have Boxee’s features integrated with something like this.

What I liked most about Boxee’s iPad app is the interface design and navigation. The app has got a beautiful custom interface with dark UI elements and big thumbnails for content; navigation inside the My Media tab (where you can access media from the desktop manager) happens with horizontal tabs when in landscape mode: you can swipe horizontally to scroll content, tap on tabs to open and collapse folders – it’s pretty cool. 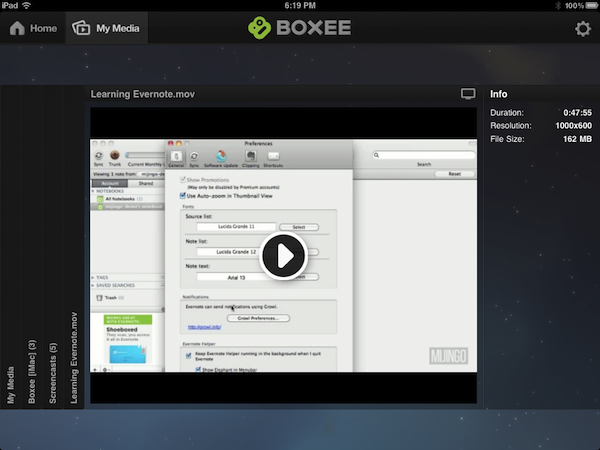 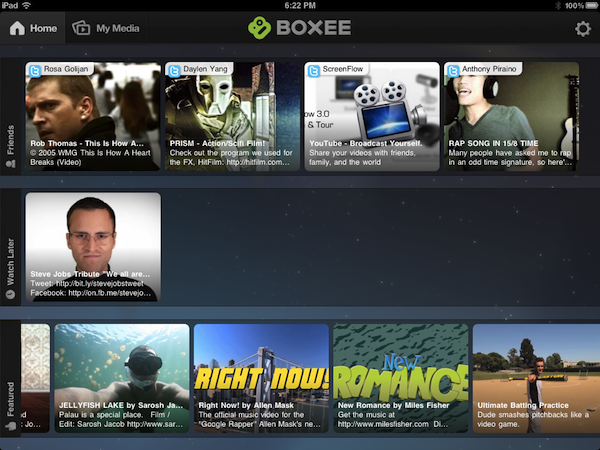 You can’t enjoy the full Boxee experience without a dedicated box, and the iPad app is a good-looking utility to access some of the features of Boxee, such as featured content, Friends, and watch later. I like the app, but it’s no Plex replacement when it comes to combining your media (not just video) with online content on a local network.

You can download Boxee for iPad for free on the App Store.

I’ve only been hearing great things about Notesy, so I decided to take it for a spin on my iPhone and iPad. Whilst I’m on a big fan of the main list’s interface, I have to say I appreciate the possibility of viewing notes as Solarized Dark & Light. Notesy obviously supports Markdown and Dropbox, it’s got TextExpander integration and can email Markdown as HTML.

Notesy tries to keep things simple, but at the same time it can be a great tool for power users who need more from an iPad text editor than plain Dropbox access to .txt files. For instance, Notesy comes with some serious sorting options in the main list, such as “reverse modified” and “reverse title”. While writing notes, you can instantly switch between variable width and fixed width fonts – each with its own separate type and point size. Or again, you can set notes to use wide and narrow margins, turn off auto-correction and customize title capitalization. Solarized aside, there are a dozen note themes to choose from, too. When in writing mode, Notesy lets you enter full-screen mode to hide all the toolbars and focus exclusively on writing/reading your document; an icon in the bottom toolbar opens a popover to check on word and character count, as well as other useful information about your note, such as full Dropbox path. Markdown’s preview window isn’t as pretty as Writing Kit’s, and the option to “view links” will open Safari, not an in-app browser. 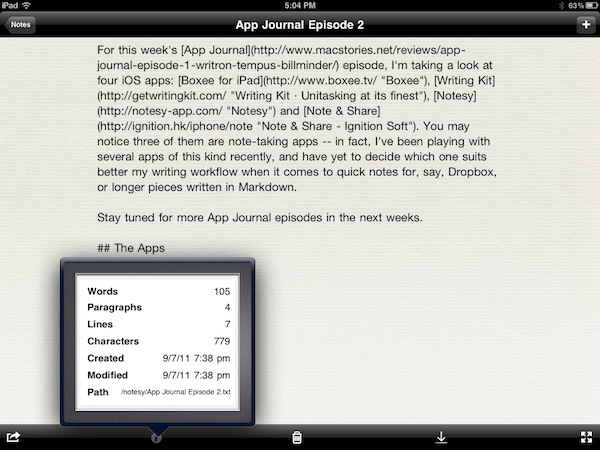 Notesy is a quality note-taking app that Markdown nerds will undoubtedly appreciate. Notesy is $4.99, and universal.

Note & Share is a straightforward note-taking app with support for Markdown to send your notes to multiple services including Twitter, Facebook, Evernote, Dropbox and Google Docs. I’ve used Note & Share to quickly write down notes, and have them fired off to Evernote, Dropbox and email in seconds – think Captio with support for Markdown and Evernote in a single, easy to use little app. There are many options and services to configure in the settings: you can choose a Dropbox folder and select auto-sync every x minutes, export via SMS or to the system clipboard – there’s even support for TextExpander snippets and you choose a default email to send your emails to.

I’ve been using Note & Share as a “mini” Evernote client for the iPhone and iPad, for when I want to jot down something real quick in Evernote’s inbox (you can set your default notebook in the preferences) without launching the full Evernote client for iOS (which, on launch, will perform a full sync. Note & Share just “sends” a note to the service). 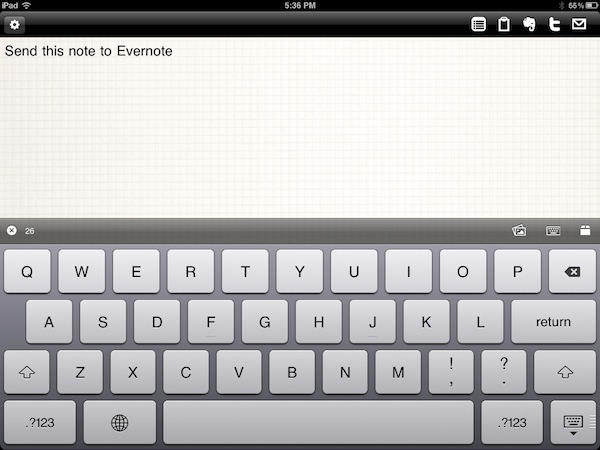 Note & Share is a great utility to get text out of your device, and onto the cloud. If you use Evernote or Dropbox in your daily workflow, you should try it. Universal and $3.99 on the App Store.

This app has been this week’s revelation for me. I’ve been trying several note-taking apps in the past weeks, but as far as Markdown and iPad-only software go, Writing Kit is a winner. Writing Kit is not meant for quick notes – say like Simplenote or Notefile – rather, it’s a powerful Markdown editor with lots of options including a custom keyboard, in-app browser, reference panel, HTML preview and sharing services. Writing Kit is a solid piece of software for those looking for a completely Markdown-focused text editor to write long articles and notes.

I’m not saying Writing Kit can’t be used for quick Mardown-based notes, if that’s your thing, but it’s clear to me the developers wanted to emphasize the app’s capability of acting as an iPad replacement for Text Edit/Byword + browser on the desktop. Writing Kit, in fact, comes with both a writing interface and an integrated browser to use for definition look-ups, finding links, or simply searching for reference material. Switching between the editing UI and the browser is seamless with the tap of a button, and once you’ve found the link you’re looking for, you can “forward” it back to your note, and turn it into a Markdown-formatted inline link. How so? The app has a super-useful link inserting feature that lets you “insert a link at cursor” with a pop-up window that will automatically fill title, address and text for you based on what you selected in the browser. It’s a fantastic feature that makes writing and looking for links extremely easy – it’s the best solution I’ve found on the iPad yet. 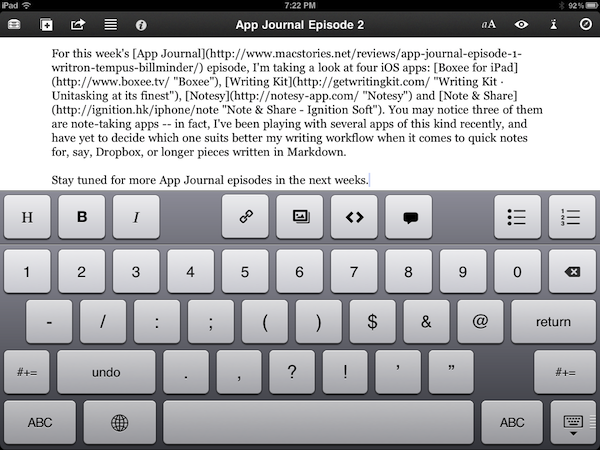 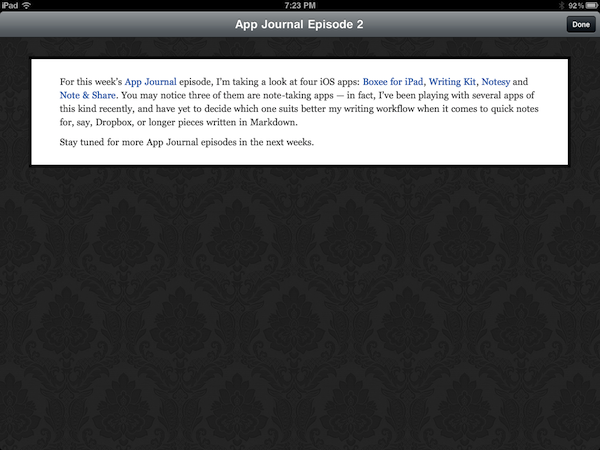 The whole app has some clever ideas that make it stand out from the crowd of note-taking apps and Markdown editors. The keyboard has one extra row for header, bold, and italic buttons, as well as images, links, code, blockquotes, and lists. These buttons act as shortcuts for often-used Markdown-specific formatting options such as headers – the app is smart enough to place your text automatically between tags either as you type or select some text. Everything from list creation to blockquotes and image insertion is made simple thanks to this extra row, although you can’t choose what characters to put in there unlike, say, Notely (which I’ll review soon). Writing Kit also lets you configure an image uploading service in Settings, and CloudApp is supported.

There are many other nice touches in Writing Kit. For instance, you can collect a reading queue for reference material and access it any time, or send links to Instapaper and Read It Later. An outline button in the upper toolbar lets you quickly jump to headers and sections, which are automatically recognized as you type. The in-app browser has built-in support for “full” and “text only” mode, it defaults searches to DuckDuckGo but it’s also got support for regular Google queries. You can hide ads and comments from any website with a toggle in the settings; you can manage online and local bookmarks, and obviously the app can sync text files back to Dropbox – it enables you to pick your own folder, and when I picked mine it correctly merged with files that were already inside it.

Two things I don’t like about Writing Kit which I hope the developers will soon improve are the font options, and Evernote sharing. The app comes with a bunch of system fonts that aren’t too shabby, but you won’t find the sweet selection of Notesy in here. Second, I found Evernote support to be quite broken in this version of the app, as “export HTML source” worked perfectly, but “Markdown source”, “Markdown file” and “HTML file” either returned an error in Writing Kit, or didn’t show up correctly in Evernote. You can, however, always export plain text via email if you don’t feel like using an external service.

Writing Kit is more than a text editor for iPad and, indeed, a real virtual “kit” of tools to take notes, write in Markdown, save your research and insert links.

Writing Kit is available at $4.99 on the App Store.