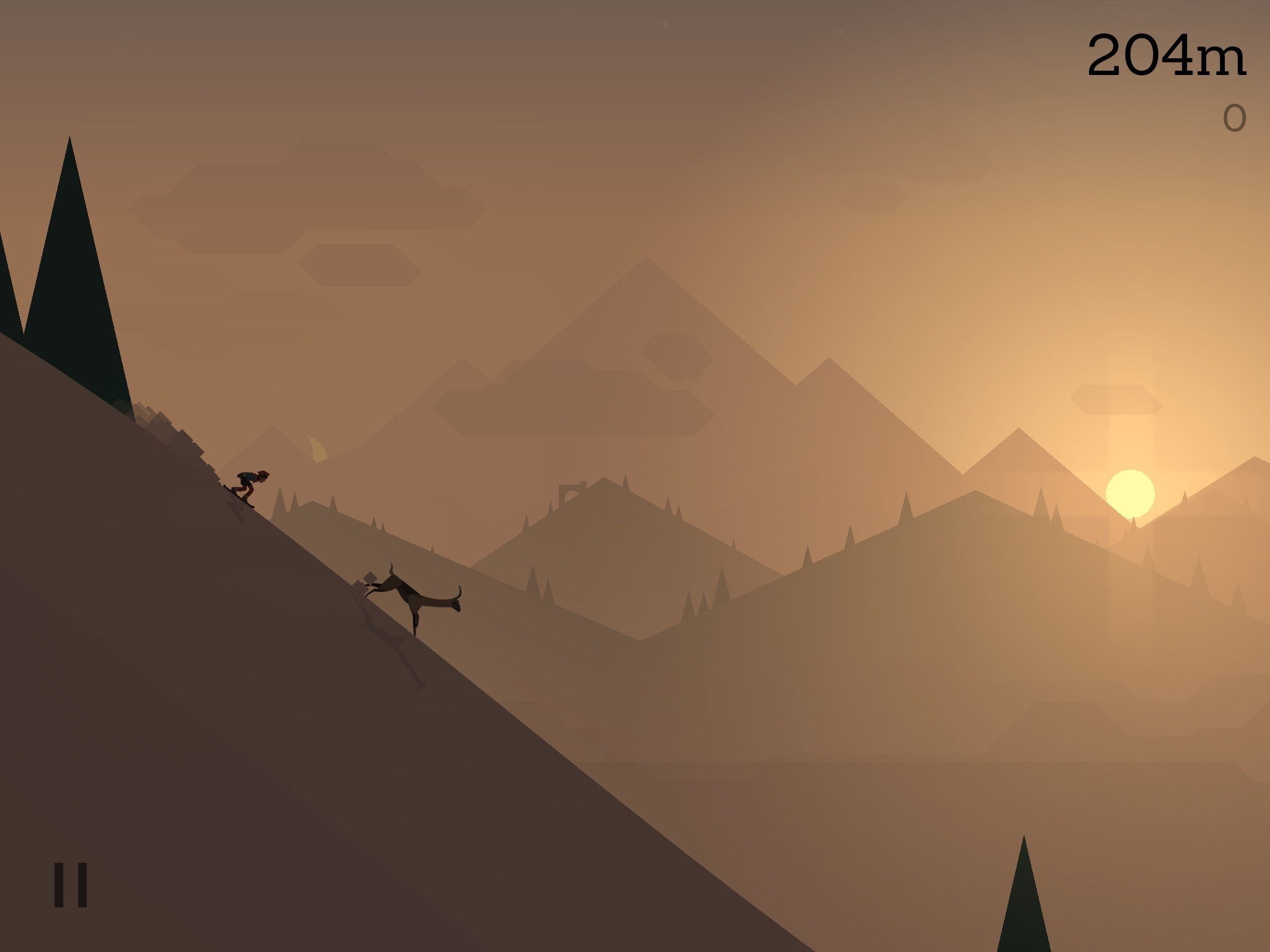 You, llamas, and mountains.

There’s a moment in Alto’s Adventure when you realize that bouncing off rocks in a snowy downhill isn’t a glitch, but a game mechanic designed to make it harder to complete certain goals and combos. This sums up my experience with playing Snowman’s new iOS game, out today for iPhone and iPad.

Alto’s Adventure exudes details. The game isn’t terribly original or innovative: it won’t take long to see similarities with 2012’s Ski Safari and Roll7’s award-winning OlliOlli, not to mention other exponents of the so-called endless runner genre that found new life thanks to the touch capabilities of smartphones and tablets.

What sets Alto’s Adventure apart from formulaic runners is the craft and beauty of its realization. Every detail is purposeful, every well-known mechanic optimized and thought through. The elegance and entertaining calm of Alto’s Adventure make its somewhat unoriginal premise secondary.

In Alto’s Adventure you control Alto, a mountain shepherd who happens to like snowboarding and needs to catch llamas that escaped down the soft slopes of his village. This unlikely mix serves as the basis for the game’s endless runner tropes, which involve tapping on screen to jump, long-tapping to backflip, and running to collect stable items (coins, power-ups) and moving targets (llamas). If you’ve ever played Ski Safari, the setting will be all too familiar: with the exception of some power-ups, there’s a striking resemblance between the two titles in terms of what you do in the game. How you actually do it, however, is where Snowman managed to differentiate itself from the rest of the category.

Design – in every sense of the word – makes Alto’s Adventure a unique experience. The game looks stunning: play sessions are randomized, but they follow a day/night cycle that has you controlling Alto’s silhouette at night as he runs through dark forests and huts lit by campfires and lanterns (with some delightful parallaxes) or briskly maneuvering Izel’s slimmer figure (you can unlock multiple characters) in the rose gold dawns of white mountaintops. A vibrant and variegated palette juxtaposes thunderous clouds with warm dusks, bright mornings with rainy nights.

The thoughtful touches you’ll notice upon each run will make the bland act of reaching higher scores and collecting coins a little more meaningful and less repetitive. Perhaps you’ll come across a flock of birds flying off to the background as Alto breaks through a rock (you’ll need a sprint to do that). Or maybe you’ll notice the subtle animations of the characters’ scarves in the middle of backflips and the reflection of sunlight on ice paths that make you accelerate quickly, which is useful for high jumps.

Not to mention sound design, an essential component of the game that goes beyond music (piano notes that grow in intensity as you run down) to include natural effects and noises that make a fictional llama-catching business realistic enough to somehow make sense. 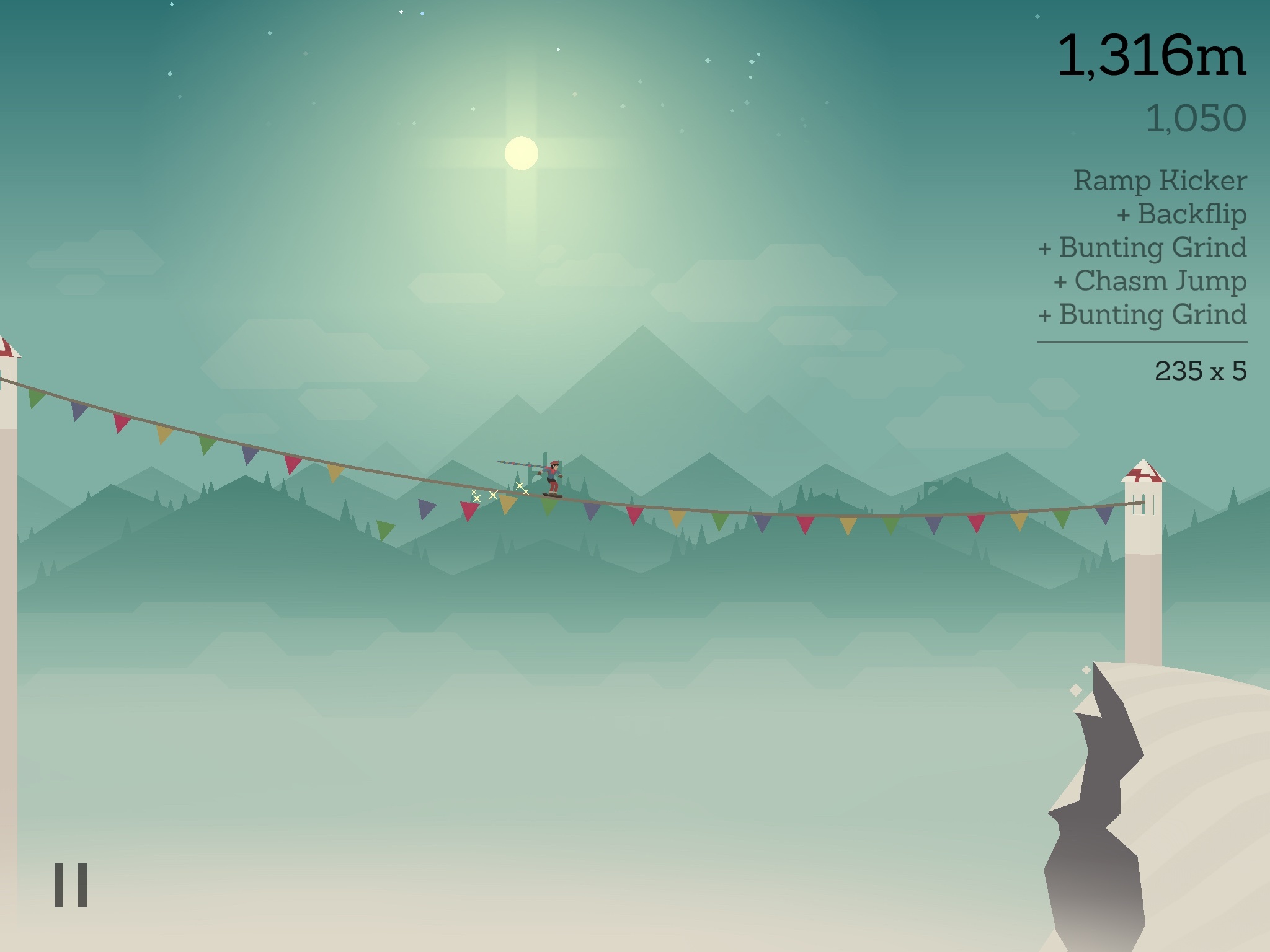 From a superficial gameplay perspective, Alto’s Adventure can be seen as banal. It doesn’t try to reinvent any iOS genre and even when it borrows from console (button-powered) gaming with echoes of OlliOlli, it does so liberally with a simplified combo system (you don’t fully control it) and goals (180 of them) to unlock levels that won’t be a challenge for seasoned iOS gamers. You rarely go beyond combining backflips with basic grinds, and the most complex combos you’ll manage to pull off will involve the aforementioned rock bouncing and the special skills of extra characters (I won’t spoil it). Alto’s Adventure is a take on the crowded endless runner genre that uses design to offer an engaging, relaxing, and beautiful experience.

And, in its simplicity and details, it’s a fun game. The controls feel just right and llamas you catch emit a rewarding “pop” sound that increases a counter in the top left. As you raise in ranks and collect coins to buy power-ups, you’ll unlock new goals to complete in a run, such as “Backflip over a chasm” or “Catch 15 llamas”. Some of these goals aren’t too hard to complete, but others required me a few attempts, which were never annoying because of the nature of the game. I would have liked to see more items to buy to enhance the sense of progress in the game; on the other hand, I’m glad that Snowman didn’t overcomplicate the game with the need to compete with friends for achievements or other social mechanics. 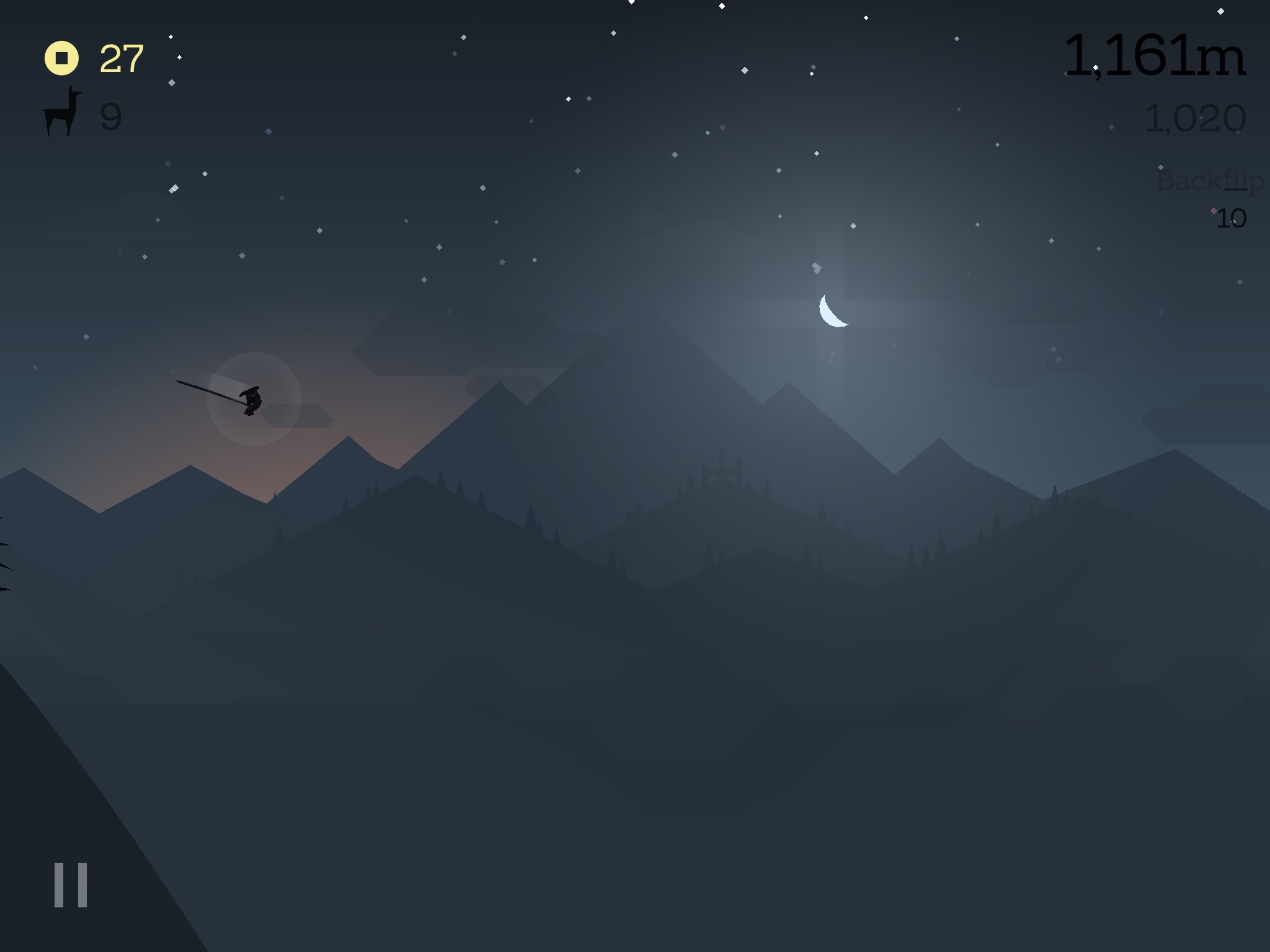 Sometimes you just wake up at night with the urgent need to catch llamas while doing backflips on your snowboard.

I’ve been playing Alto’s Adventure for the past couple of months and I haven’t grown tired of it. Maybe I’m too much of a fan of endless runners – they lend themselves so well to quick sessions as well as “just one more” hour-long playthroughs – but I still discover something new every time and I’m having fun trying to beat my high scores and looking at the scenery. In most endless runners I’ve played over the years, I never considered looking at stages as an active part of the experience; in Alto’s Adventure, occassionally to my own detriment, my attention wanders off to animations and colors, llamas who stumble and lantern formations taking off to the sky.

That’s not to say Alto’s Adventure is a pretty shell with no substance. Quite the contrary: Alto’s Adventure captures the essence of an endless runner and the feel of being alone against a mountain, translating everything to an artful, nimble iOS game about snowboarding. Like Monument Valley, Alto’s Adventure is a pleasure to play and look at, and even when it stumbles (the whole concept of the scarf is a little convoluted and confusing) its issues don’t impact what the game achieves.

Alto’s Adventure is one of those gems. The simple but refined gameplay, tasteful art direction, and addicting one-more mechanic come together in a cohesive experience that’s perfect for iOS and is sustained by a healthy paid upfront business model with no tedious In-App Purchase prompts. Alto’s Adventure is beautiful and fun, and I won’t stop playing it any time soon.

Alto’s Adventure is available at $1.99 on the App Store.