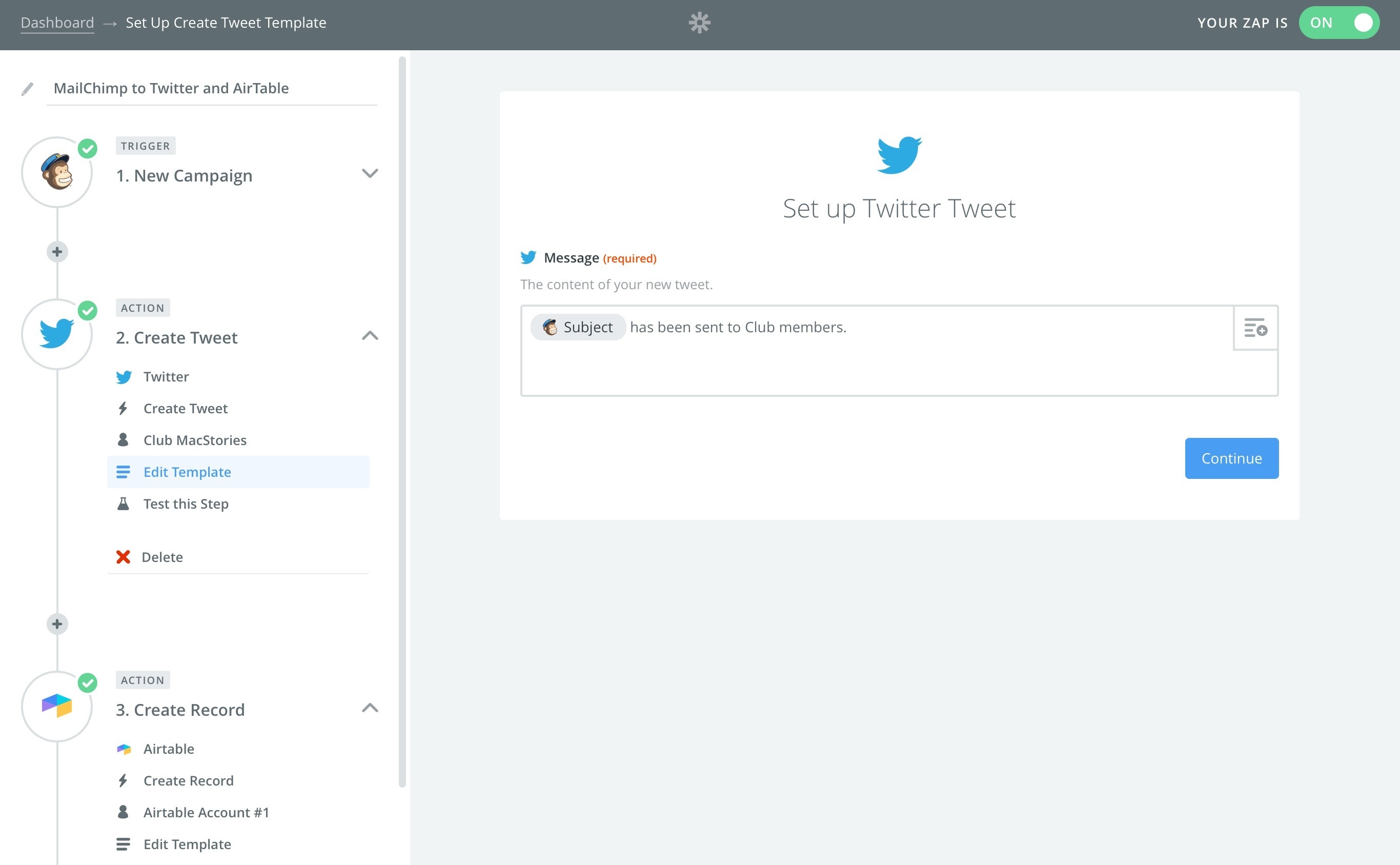 The new multi-step editor in Zapier.

I’ve long been interested in web automation as a complement to my iOS apps and workflows. While I expressed my fair share of skepticism about the practical benefits of web automation in the past – primarily due to a lack of native apps to trigger recipes on IFTTT and Zapier – with time I’ve learned to appreciate the ability to automate web services and let them perform tedious tasks for me. The fact that I’m increasingly relying on web services with iOS apps that are simple front-ends to data that lives in the cloud might be related, too.1 My use of web automation isn’t dramatically creative: I have a couple of Do Button recipes to send automated emails with one tap; I forward YouTube updates and some RSS items to Slack; and, I let a couple of Twitter accounts tweet on my behalf with automated recipes because I’d forget otherwise. Nothing too revolutionary.

Today, Zapier – the power-user (and paid) alternative to IFTTT – is launching multi-step zaps (the equivalent of recipes in IFTTT), which I was able to test for the past week. I’ve long preferred Zapier to IFTTT for the additional controls that it offers when building complex web automations. Zapier lets you assign filters to actions, you can parse data from email messages with a dedicated Zapier Parser service, and, generally speaking, everything is built with an eye for people who, like me, want to tweak as much as possible. Multi-step zaps fit squarely into this strategy and they’re, by far, the most powerful solution I’ve tried to chain multiple web services together and save time.

The main idea is that if something happens on a web service and you want to pass the output to multiple destinations – like, say, Twitter and a spreadsheet – you shouldn’t have to create separate zaps for that event. Multiple steps in Zapier work as you’d expect: you pick a service where you define a condition (such as “new YouTube video from channel”), then you choose what to do next by combining multiple services in a single flow of actions.

You can, for instance, share a link from RSS to Google Sheets and Slack at the same time, or you can read text from an email and log the result as a note in Evernote and share it on Twitter, too. Imagination is the limit, and because multi-step zaps have been enabled for all the existing 500+ services supported by Zapier, there will be plenty to choose from.

You can even mix-and-match data from multiple apps to pass all the essentials to a dedicated hub, like routing all customer information from emails and forms into your CRM or tracking spreadsheet.

In my tests, I was impressed by the simplicity of the new system and how intuitive it was to put together web workflows that spanned three and more services. In the new multi-step editor, services are listed from top to bottom: one trigger at the top, followed by ‘+’ buttons to add filters (with AND or OR conditions) and multiple actions. Everything is laid out clearly and you can go back at any time and make changes if you want to alter the course of your workflow. I’m a fan of how Zapier redesigned their editor: it feels faster and simpler despite the increased functionality, which is a notable achievement.

I was able to come up with two multi-step workflows that I’m going to keep using for the foreseeable future. In the first one, I set up @ClubMacStories to tweet every time a new MailChimp campaign is sent to Club members; the link to the campaign is also saved to our shared base in Airtable at the same time, so we can build a log of previous campaign links. 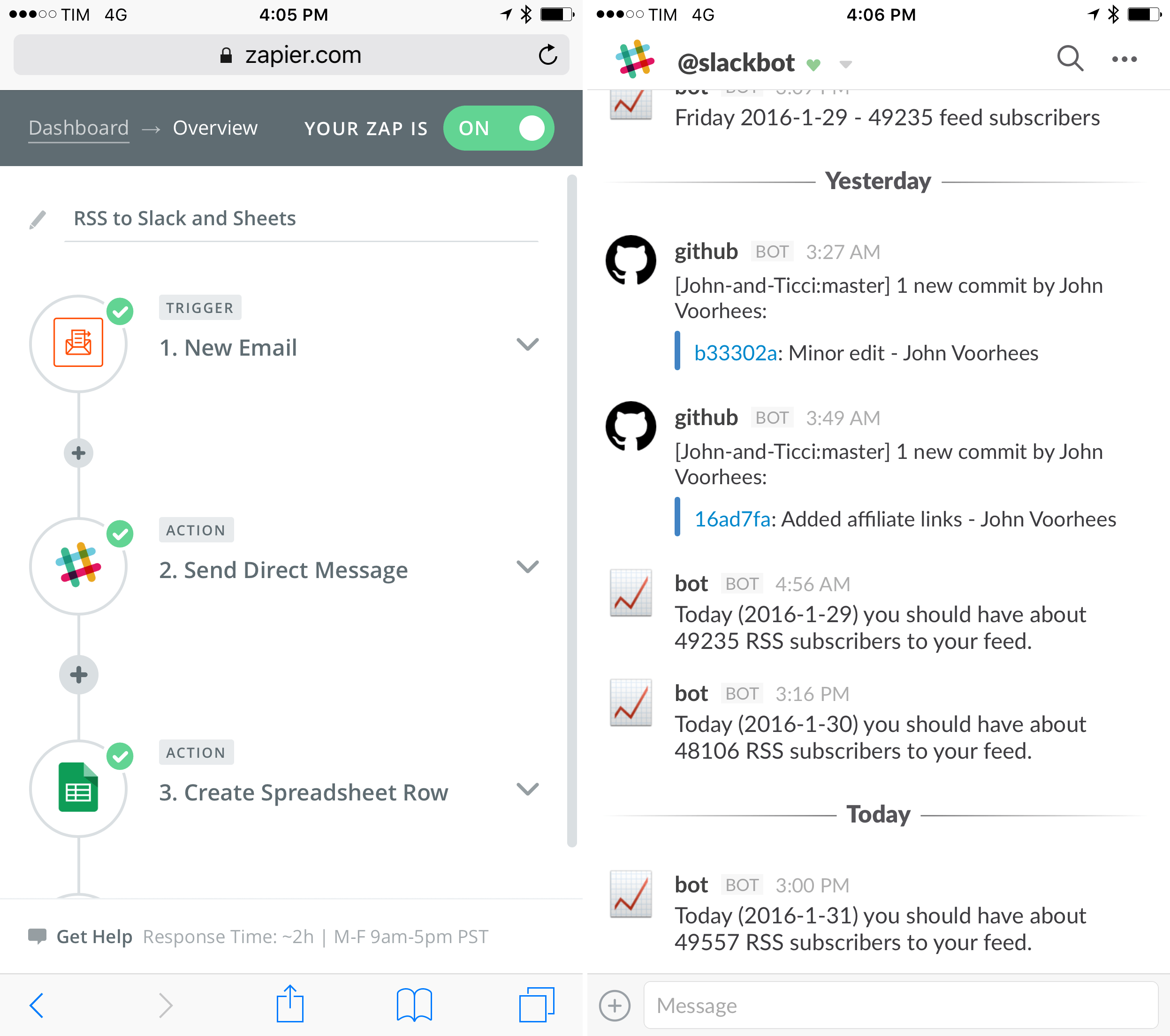 In the second workflow, I use Zapier’s email parser to extract the number of subscribers to our RSS feed from an email that our server automatically sends us every day after it runs a script to read our RSS logs. This email contains two bits of data I want to extract: the date and the actual number of subscribers. Making two variables out of this data is easy in the parser’s web template – I just need to select text that will always be in the same position in the emails and give a name to each variable. Then, thanks to multiple steps, I can create a workflow where the date and subscriber count are appended to two columns in Google Sheets and shared with a personalized message via slackbot. This way, I get a notification each morning about the RSS hits for the previous day, but I’m not bothered by an email and yet everything is saved to a spreadsheet for future reference. All done in one workflow.

Zapier’s new multi-step web automation capabilities open up a lot of powerful scenarios – many of which I haven’t had time to consider in the past week. There’s a new search action to look up any type of information during a workflow, with a fallback option to create new data if search doesn’t return any results. You can now run JavaScript and Python scripts as actions – which seems crazy, but I tried it, and it works.

Zapier isn’t moving away from classic two-step zaps; they’re still available, but multi-step zaps are exclusive to paid accounts, which start at $20/month as they’re meant for users who truly require dozens of workflows to be executed on a daily basis. I’m not sure I fall into that category (yet), but I like what I’ve seen to far, and I’m going to consider whether I could use more multi-step zaps. If anything, they’re extremely fun to play with.