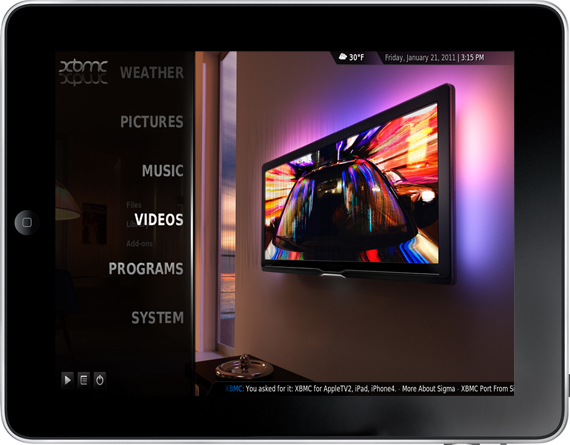 XBMC, a popular media center originally made for the first Xbox has become fairly widespread has been available for a variety of platforms, today that platform base extended to include the new Apple TV, iPhone and iPad.

The client on these new platforms is not stripped down to simply just view streams but is fully fledged with all the features you would come to expect it to have on a Windows PC. Because of this it is being distributed for the iOS devices through a Cydia repository and for the Apple TV through an apt-get install.

Scott Davilla one of the XBMC developers talked to TUAW and he revealed that development for the Apple TV 2 started only on November 1st last year and the iOS versions a few weeks later. He notes that the built in web server is currently disabled and the skin isn’t optimized but says improvements will be made including the possibility of implementing AirPlay into all the Apple related releases.

Perhaps one of the most interesting developments that occurred whilst XBMC was ported was the discovery of an API called VideoToolBox that allows hardware video decoding, encoding and scaling of the video size to match the final display size. So powerful is this API that Davilla and others that developed XBMC for iPad are able to stream full 1080p video with no transcoding to the iPad and it plays nearly perfectly, only dropping a few frames. Davilla’s confident however that the A4 processor can handle 1080p and will be working to ensure fully smooth playback.

TUAW put together some video’s demonstrating it running on all three of the new platforms, check it out here.